You are here: Home » Blog » Biodiversity » Another Conversation with Thomas Cole

Another Conversation with Thomas Cole

February 2018. “It would seem unnecessary to those who can see and feel, for me to expatiate on the loveliness of verdant fields, the sublimity of lofty mountains, or the varied magnificence of the sky; but that the number of those who seek enjoyment in such sources is comparatively small. From the indifference with which the multitude regard the beauties of nature, it might be inferred that she had been unnecessarily lavish in adorning this world for beings who take no pleasure in its adornment.” These lines from Thomas Cole’s “Essay on America Scenery,” his artistic and environmentalist manifesto published in 1836, opened my conversation with him when we met in New York City in February 2018. 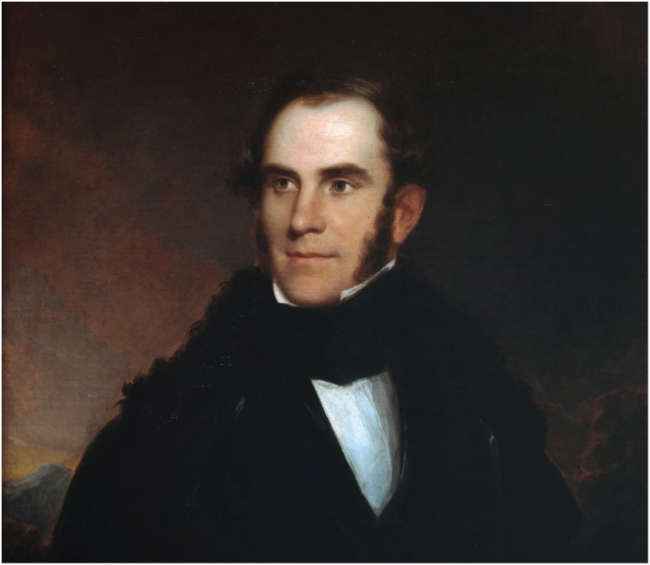 The occasion for our meeting was a special exhibition at the Metropolitan Museum of Art: Thomas Cole’s Journey: Atlantic Crossings. The online description explains the significance of the exhibition: “Celebrated as one of America’s preeminent landscape painters, Thomas Cole (1801–1848) was born in northern England at the start of the Industrial Revolution, immigrated to the United States in his youth, and traveled extensively throughout England and Italy as a young artist. He returned to America to create some of his most ambitious works and inspire a new generation of American painters.” He and his students, and other American landscape painters he inspired, came to be known as the Hudson River School. Elizabeth Kornhauser, Curator of American Painting and Sculpture at the Metropolitan Museum of Art and co-author of the exhibition catalogue, calls Cole “the first proto-environmental artist in America,” an understatement of his pioneering vision. 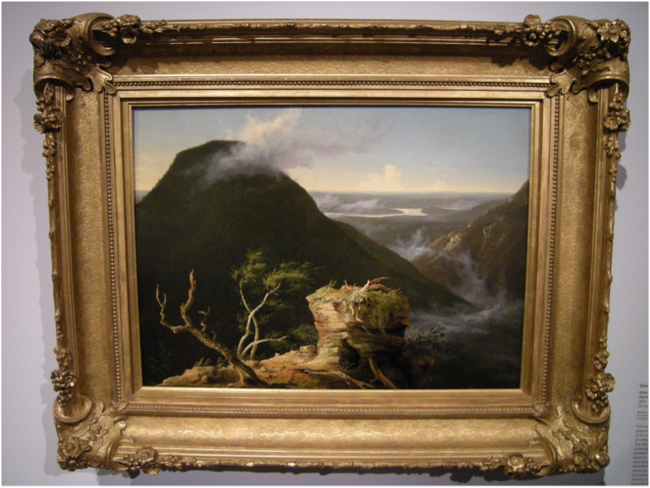 View of the Round-Top in the Catskill Mountains (Sunny Morning on the Hudson), Thomas Cole, 1827, at the Metropolitan Museum of Art, February 2018.

Thomas Cole was born in 1801 in Bolton, Lancashire, in northwest England. As the Industrial Revolution and global trade accelerated, Bolton grew into one of the largest centers of cotton spinning and textile weaving in the world, an Industrial Revolution boomtown. The forces driving this development caused a loss of traditional spinning and weaving jobs and the collapse of the pre-industrial economy. As a young boy, Cole worked in a textile factory, and witnessed arson and machine-breaking attacks by Luddites, groups of unemployed workmen whose jobs had been replaced by the new machinery. Our word “sabotage” comes from the French cousins of the Luddites, whose simple wooden clogs, called “sabot” in French, were sometimes thrown into machines to disable them. When Cole was seven years old, the English poet William Blake called the burgeoning factories “dark Satanic Mills.” Painters such as Philip de Loutherbourg (1740-1812) and J.M.W. Turner (1775–1851) were depicting their dystopian images in their works. 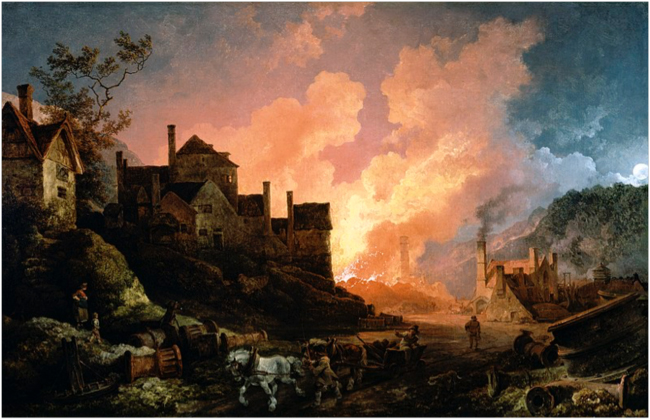 When his father’s business failed, Cole worked for a time as an engraver of the blocks from which calicoes, colorful cotton fabrics, were printed. Finally, in 1818, when he was 17 years old, his parents gave up on England and emigrated with the family to America, settling in Ohio. (The exhibition at the Metropolitan Museum marks the 200th anniversary of Cole’s first, westward crossing of the Atlantic.) His early experiences, the exhibition argues, profoundly influenced Cole’s later attitudes toward the relationship between nature and society.

Determined to become a painter, Cole studied from textbooks and took lessons from a travelling artist. He moved to New York City in 1825 and travelled up the Hudson River on a steamboat to Catskill, New York, where he made sketches and paintings. The Catskill Mountains to the west were already a tourist destination, but in his paintings Cole removed or minimized signs of human influence, presenting a view of the American wilderness before European settlement. His early paintings were an immediate success – they tapped into a growing sense of revulsion at the rapid environmental destruction many people saw around them, and a longing for a more balanced – and beautiful – relationship between humans and nature.

After these early successes, in 1829 Cole crossed the Atlantic again. He spent two years in England and a year in Italy, studying the techniques of recognized landscape painters, before returning to the United States in 1832. His new paintings were especially influenced by the work of the French pioneer of landscape painting, Claude Lorraine (circa 1600–1682), and the English painters John Constable (1776-1837), and J. M. W. Turner (1775–1851). As the Met’s website says, “This exhibition brings to prominence the dialogue between American and European artists in the mid-19th century by hanging Cole’s work in direct juxtaposition with works he studied on his formative journey.”

Returning to his studio in Catskill, New York, in 1832, Cole immediately began to create some of his most famous works. InThe Course of Empire, a series of five large paintings, he presented a prophetic view of the rise and decline of Old World civilizations, and an artistic and philosophical warning to the rapidly-industrializing United States during Andrew Jackson’s presidency (from 1829 to 1837). The first panel, The Savage State, portrays a hunter-gatherer culture in a natural landscape, and the second, The Arcadian or Pastoral State, shows a Romantic vision of a pastoral and agricultural paradise, with art and music emerging. The third painting of the series, titled The Consummation of Empire, shows the previous scenes harshly transformed into an artificial humanscape dominated by white marble buildings. The green of nature is gone, and the same rocky promontory from the previous panels skulks on the far right, connecting the scene with the past history of the place. The natural and semi-natural landscapes of the first two paintings are “obliterated by the garish architecture of an imperial city. At lower left, the returning conqueror, an emperor robed in red, crosses the marble bridge on a chariot pulled by an elephant. His parade includes African captives and looted treasure,” says the Met’s caption for the painting. Some scholars of Cole’s works have said that in the red-robed emperor in the lower left foreground Cole was referring to Andrew Jackson. Our current president seems to have a fascination, if not personal identification, with Emperor Jackson. 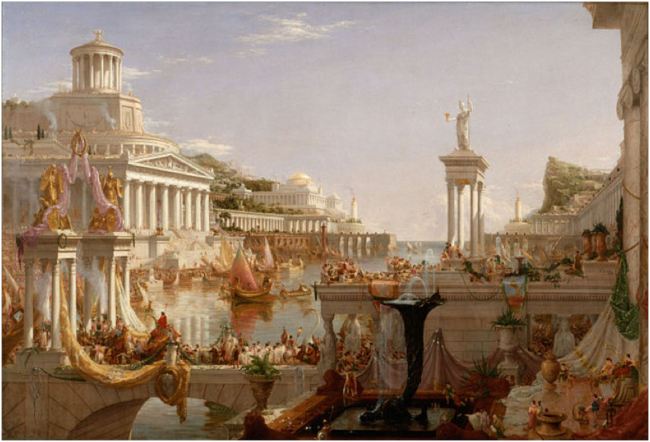 But after this perspective of the pinnacle of “civilization,” Cole’s historical vision darkens rapidly. In the fourth painting of the series, Destruction, completed in 1836, chaos and violence, fires, smoke, destruction, and a storm have overwhelmed the scene of the previous painting. If I were to place us along Cole’s continuum, this fourth painting seems to match the present state of the world most closely. In the final painting of the series, Desolation, all traces of human life have vanished, and nature is once again taking over the landscape. We may be heading that direction. 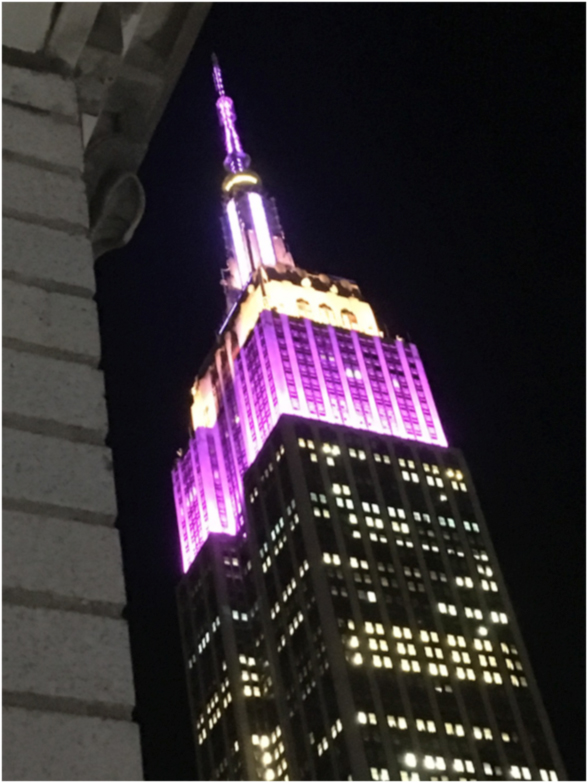 “In these paintings,” writes Elizabeth Kornhauser, the curator of the exhibition, “the artist addressed the dangers faced by the young nation under the expansionist policies of President Andrew Jackson, which led to drastic ecological, social, and economic changes, and he challenged the American public to consider the moral value of maintaining the sublime aspects of the landscape.”

In his painting View from Mount Holyoke, Northampton, Massachusetts, after a Thunderstorm —The Oxbow, completed in 1836 – the same year as the last two paintings of his The Course of Empire series – Cole “called on the American public to stop destroying God’s pure creation—the wilderness,” writes Kornhauser. The large painting, about four feet tall and six wide, shows a sinuous oxbow bend in the river. On the far side, the forest has been mostly cleared for farms; clearcuts and wisps of smoke on the hills show that the process is continuing. On the near side, intact forest still covers the ridge, with dark rain falling in the background. Cole painted a tiny self-portrait into this painting, in the bottom center foreground, sitting at his easel but facing toward us, and the wilderness. 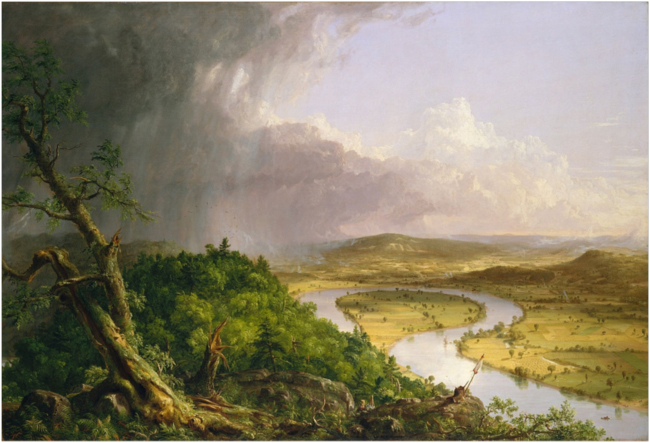 View from Mount Holyoke, Northampton, Massachusetts, after a Thunderstorm—The Oxbow. 1836. The Metropolitan Museum of Art.

Cole’s mentoring and inspiration of a generation of American landscape painters who like him celebrated the beauty and spiritual value of nature and “scenery” left an enduring – if unfinished – legacy in our national psyche. I’ve written here before about Frederic Edwin Church (1826-1900), perhaps Cole’s most talented and celebrated student, and about Church’s inspiration by the thought of Alexander von Humboldt (1769–1859). I’ve also written about Edward Bierstadt (1824–1906), another 19th century American landscape painter associated with the Hudson River School, who learned from and extended Cole’s work to depict the Colorado Rocky Mountains and California’s Yosemite as national treasures, sublime and spiritual landscapes worthy of our care and conservation. And it is interesting to note the overlap of Cole’s life with Ralph Waldo Emerson (1803-1882), Henry David Thoreau (1817–1862), John Muir (1838–1914), and John Burroughs (1837–1921), whose writings expressed views similar to those presented by Cole in his art.

Cole was a visionary, whose art reflected his personal journey, crossing and re-crossing the Atlantic at a time when the damage being caused by the emerging Industrial Revolution was clear in England and just beginning to be felt in the New World of America. He issued his prophetic warnings of the ecological and social costs of this dramatic shift in the relationship of humans and nature in his paintings and writing. As the Metropolitan Museum’s website about the exhibition says, “Cole’s abiding passion for the American wilderness resulted in his fervent visual warning in these paintings to his fellow American citizens of the harsh ecological cost of unchecked development of the land.” As a nation we didn’t heed his warning very well, although it radiated into our American culture through his influence on many other painters and writers. Their vision and their environmental warnings are still supremely relevant today.

As we parted on that cold February morning in Manhattan, Thomas Cole had the last words: “American Scenery is a subject that to every American ought to be of surpassing interest; for, whether he beholds the Hudson mingling waters with the Atlantic, explores the central wilds of this vast continent, or stands on the margin of the distant Oregon, he is still in the midst of American scenery. It is his own land; its beauty, its magnificence, its sublimity – all are his; and how undeserving of such a birthright, if he can turn towards it an unobserving eye, an unaffected heart!” 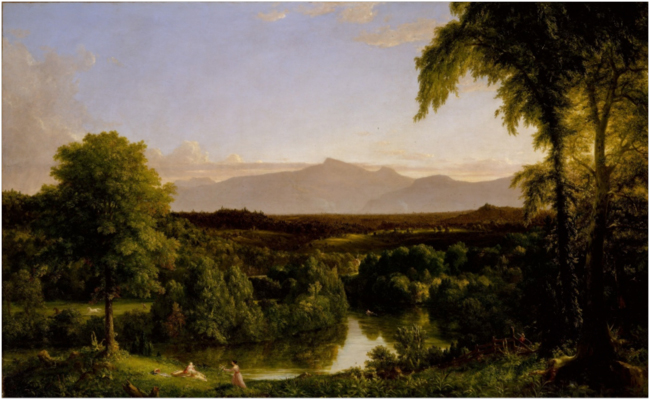 A modern translation of Cole’s word “scenery” would be “landscape.” He was, after all, one of the founders of American “landscape” painting. But ecologists have taken on that word also, and there is now a well-established sub-field in ecological science called landscape ecology. It deals with the distribution, patterning, and functioning of ecosystems on medium and large spatial scales. Landscape ecologists work under the premise that humans are embedded in ecosystems, dependent on them, and influence them for better or worse according to their choices. Cole understood that ecological concept perfectly. 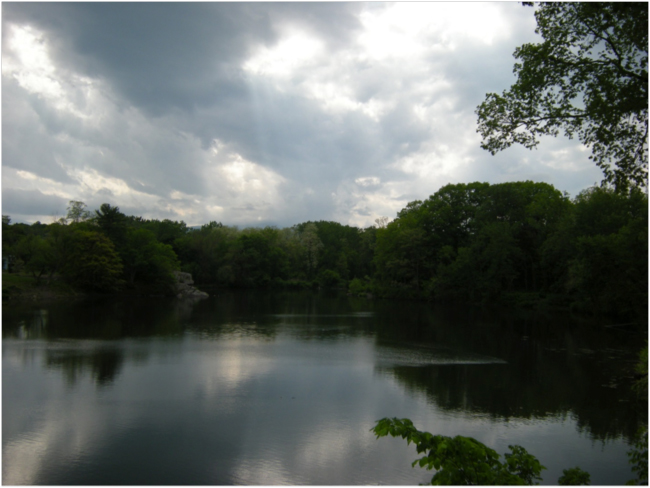 Cole continued: “There is in the human mind an almost inseparable connection between the beautiful and the good,” expressing his conviction that we need an environmental ethics derived from the beauty of nature and its ecological wholeness. More than a century later Aldo Leopold, another foundational figure in ecological philosophy, would call this a “land ethic.” Cole and Leopold were on the same wavelength in their aesthetic and ethical perceptions.

With a warm handshake and deep look into his eyes, I thanked Thomas Cole for our fascinating conversation, and said goodbye, until next time.