You are here: Home » Blog » Biodiversity » Monarchs and Hawks at Cape May

Monarchs and Hawks at Cape May

October 7th, 2017. After years of making a faithful fall pilgrimage to Cape May, New Jersey, to watch the migration of hawks and monarch butterflies, my consulting travel schedule overruled the annual tradition in 2014, and I haven’t been back since then. This year I was finally able to return again.

One of the blessings of trying to observe natural phenomena is that we are not in control – nature is. We can hope that the hawks or butterflies will be at their peak, but all of us are caught up in a complex system we can’t control or hardly even predict, and that experience of being embedded in a complex ecological world is humbling – or should be. In 2011 on almost the same date, as I sipped my morning coffee, I watched a steady flow of monarch butterflies – an average of one every 30 seconds according to my informal tally – heading south past the ocean-facing balcony of my 5th-floor room at the Ocean Holiday Motor Lodge in Wildwood Crest, New Jersey, just north of Cape May. This year, nothing. Monarchs and hawks take advantage of cold fronts pushing strong winds that carry them south, but this year former Hurricane Nate, now a tropical depression, was lollygagging up from Louisiana, spinning a strong flow of unseasonably warm and humid air to Cape May on steady breezes from the south. Sipping my coffee on the balcony of Room 512, I was sweating in shorts and T-shirt, and not seeing any butterflies.

But I could imagine what it would have been like a week earlier, in the aftermath of another passing front, when the Cape May Bird Observatory’s Monarch Monitoring Project reported: “Wow! What a weekend in Cape May. This has been the biggest year since 2012. We saw an influx of migrating monarchs on Friday and Saturday, September 29 and 30th, with a departure of most on Sunday morning Oct. 1st. Our driving census for Saturday was 279 per hour. A point count in the dunes was up to over 700 per hour.” That rate of migration would be several multiples of my 2011 Ocean Holiday point count of 120 monarchs an hour. Wow is right!

The parking lot below the lighthouse at Cape May Point was two-thirds full, and the Cape May Bird Observatory’s hawk watch platform was relatively busy on this unseasonably warm and tropically humid Saturday in October. There was a slow and sporadic flow of hawks passing overhead, but ten minutes was enough to confirm what the lack of monarchs had already told us. Birds and butterflies go with the flow, and not against it. There were still just enough migrant hawks though, especially peregrines, to make spending a little time on the platform worthwhile. 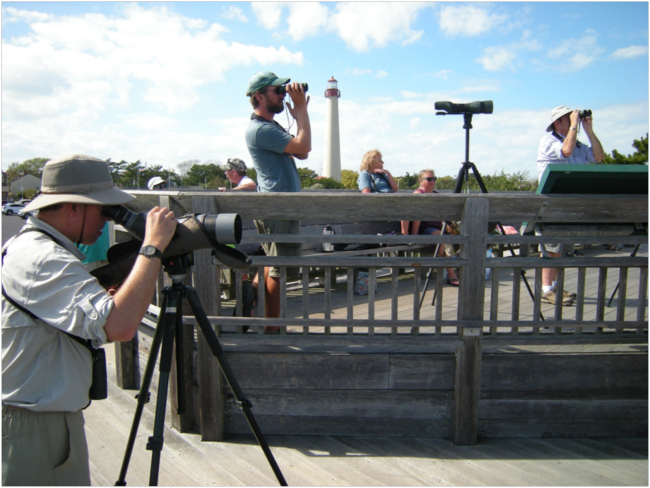 Peregrine coming in! The CMBO Hawkwatch Platform on Saturday, 7 October.

To me the more interesting “count” was not of the birds or butterflies, but of the number of people interested in both. That was especially clear at the 2 PM demonstration of monarch butterfly tagging by the Monarch Monitoring Project associated with the Cape May Bird Observatory, in a picnic shelter beside the hawkwatch platform. Around a hundred people gathered to hear about the project, which has been monitoring the fall monarch migration at Cape May since the early 1990s.

The project uses counts of butterflies observed on a road transect to come up with an average daily rate of migrating monarchs. This census provides an estimate of the size of the population of butterflies heading to their overwintering area in Mexico from anywhere northeast of Cape May, a pretty good chunk of their North American range. The Cape May count is one indicator of the overall status of the monarch population. Although it fluctuates dramatically, mainly because of year-to-year climatic factors, the data from Cape May unfortunately suggest a slow downward trend.

Monarchs migrate to Mexico from a much larger area than that supplying the migrants to Cape May. To get an overall picture, ecologists base their assessment of the total monarch population on the area of overwintering sites in the mountains of Michoacán. Butterflies there are far too dense to count, but the area of the roosts represents an estimate of the total population. WWF Mexico and the Comisión Nacional de Areas Naturales Protegidas (CONANP), the Mexican national authority for protected areas, have been monitoring the size of these overwintering roosts since the mid-1990s. Their data also show a downward trend, which bottomed out in the winter of 2013-2014, when less than one hectare – an area only slightly larger than a football field – was occupied by overwintering butterflies. 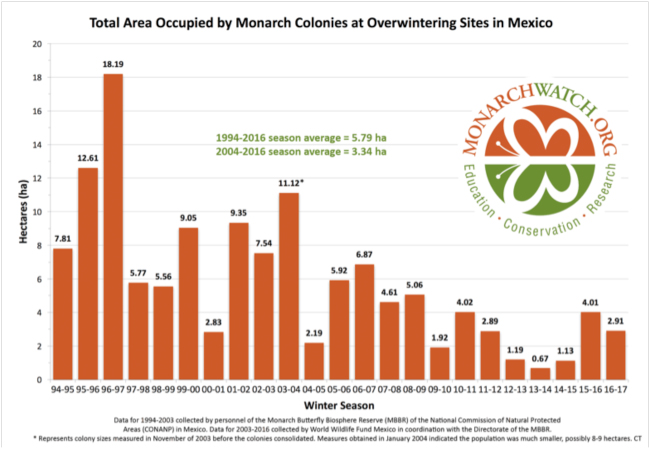 In 2012 a group of monarch experts published a paper titled: “Decline of monarch butterflies overwintering in Mexico: is the migratory phenomenon at risk?” They concluded that the answer was “Yes,” writing that “Three factors appear to have contributed to reduce monarch abundance: degradation of the forest in the overwintering areas; loss of breeding habitat in the United States due to the expansion of genetically-modified-herbicide-resistent crops with consequent loss of milkweed host plants, as well as continued land development; and severe weather.”

But since that depressing assessment, a corner in monarch conservation may have been turned. In the winters of 2015-2016 and 2016-2017 the overwintering roosts were several times larger than at their low point, although still small compared to decades ago.

With respect to the threats to monarchs, data from WWF Mexico and CONANP show that the threats to forests in the overwintering reserves in Michoacán, especially from illegal logging, have gradually been brought under control and are decreasing. And although the sterilization of the agricultural landscape across the U.S. Midwest from expanding herbicide use continues apace, more and more monarch lovers are planting milkweeds in “butterfly gardens” in urban and suburban areas in a backchannel rebellion, as I have here in Falls Church, Virginia. Speaking of which, I now appreciate why common milkweed is called a “weed” – since I first introduced it to my garden in 2010 by transplanting a few plants from a powerline cut, now their feathery seeds have drifted from pods to find all corners of my lawn, and little milkweeds are almost as common as the ubiquitous dandelion.

At the monarch tagging demonstration, after a brief talk about monarch biology and migration, the big group broke up and huddled around five picnic tables where staff members or volunteers from the project demonstrated monarch tagging on butterflies that had been netted earlier in the day. The tiny circular tags used by the project and many other monarch monitoring groups are available from Monarch Watch, an organization dedicated to monarch conservation. Each tag has a unique number identifying that butterfly; taggers record where and when it was captured so it’s migratory journey can be tracked if, where, and when the tag is ever seen again. The tag is attached to the bottom of the right hindwing after some scales are gently scraped off with a fingernail to provide a firm attachment on the underlying membrane of the wing. The tags are so light they don’t affect the butterfly’s flight. Tags from more than 70 monarchs from Cape May have been recovered in the overwintering areas of Mexico, a journey of about 2,500 miles that may take a couple of months. Most butterflies reach the Mexican roosts by early December. Some may travel much faster, depending on the weather. One tagged Cape May monarch was recaptured in North Carolina about 500 miles away three days later, probably having ridden a front and thermals in one fast leg of the journey. 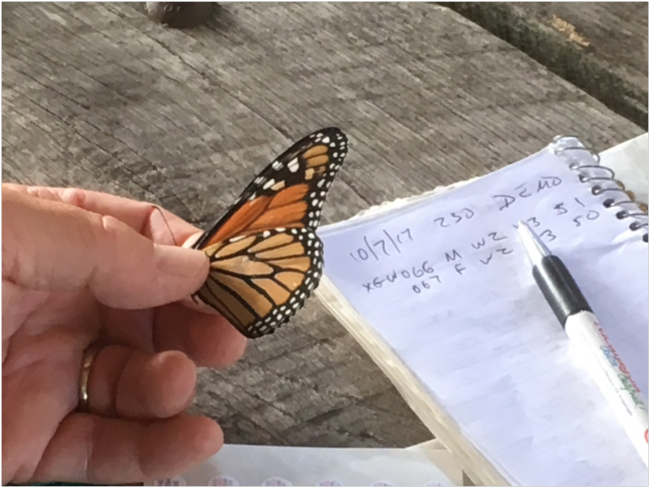 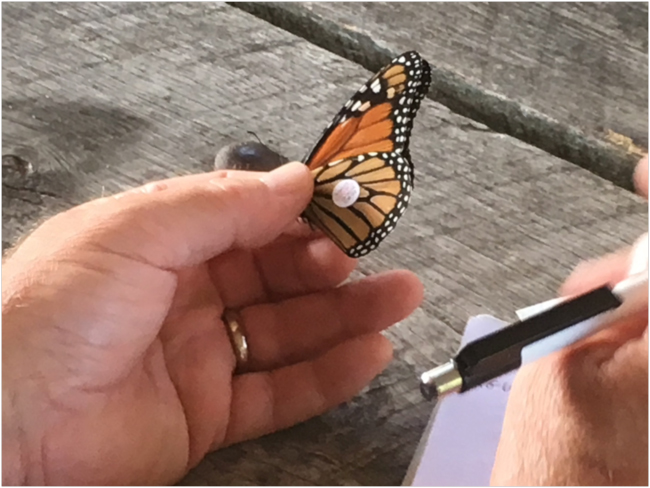 Tagged and ready for release 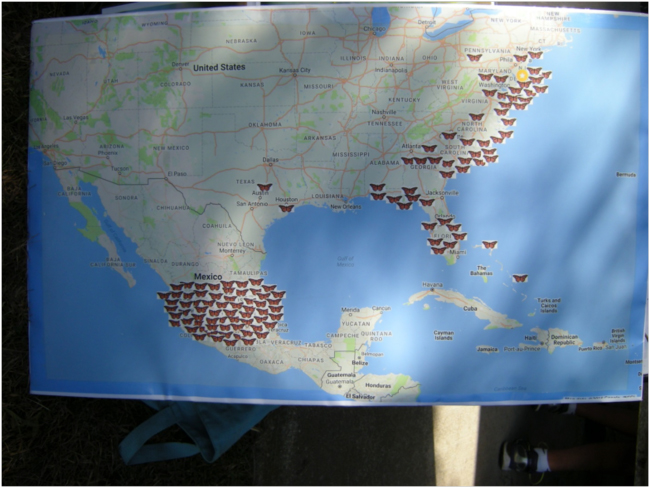 On Sunday the tropical breath of former Hurricane Nate still hung over Cape May, and monarchs were still scarce and not moving much. But at the hawkwatch platform, for reasons not clear to anyone, peregrine falcons were going by at a steady clip. Several of them passed during the half-hour I was there in the late afternoon. A young peregrine stooped suddenly and missed an unwary pigeon by a foot. The drama was over in a few seconds, but the image of that sudden surprise will make me smile until next year. The message echoed back to that of the whole weekend. Nature is dynamic, we can’t control or predict it. We just have to be there and watch. Watch intently. Doing that is humbling. It immediately puts us into a much bigger world, the surprising community of creatures we share the planet with.

Now, about two weeks later, the amazing citizen-science monarch monitoring network Journey North is reporting a large, very late migration. In their weekly update they write: “Observers across the north continue to report peak migration. Unusually warm fall temperatures are resulting in the latest migration we’ve ever recorded. Peak migration reports spanned from Ontario to Texas, a distance of nearly 1,500 miles. We typically receive late sightings of single butterflies, but this year the late observations are among the largest of the season. Never have sightings so large and so late been reported from Canada – and cold temperatures are coming.” 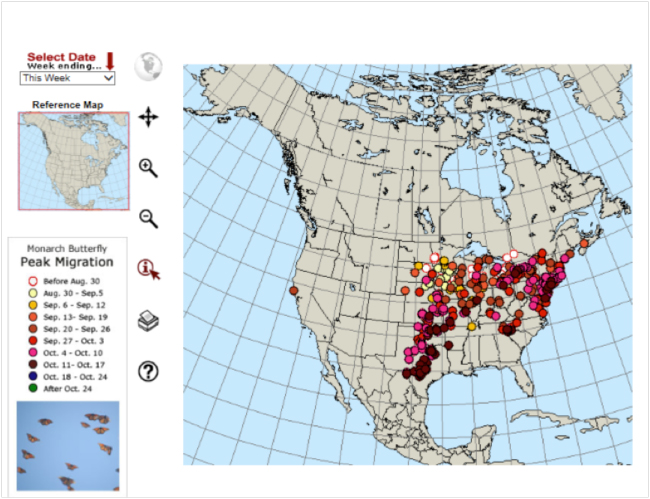 Climate change may explain why monarchs waited so long to move south this year. The National Oceanic and Atmospheric Administration’s climate assessment for September reported that “the nationally averaged temperature was 66.3°F, 1.4°F above the 20th century average, and ranked among the warmest third of the historical record. Near-record warmth was observed in parts of the Great Lakes and Northeast.” Butterflies were probably just dallying in the north because of these late warm temperatures. And this year’s late, geographically-large peak of migration may be a hopeful sign for monarchs. Chip Taylor, a leading monarch ecologist and director of Monarch Watch wrote in a blog in July that: “In sum, this looks to be a good year for monarchs – with a stronger migration in most regions and a good prospect that the overwintering population will increase from the 2.91 hectares of last year to 4 hectares or better this coming winter.”

For the Aztecs of pre-Columbian Mexico, butterflies represented migrating souls and their travels between the worlds of life and death. Now it’s almost Halloween, the night before All Hallows’ Day, celebrated in Mexico as the Día de los Muertos, the Day of the Dead. Driven by their evolutionary imperative, monarchs begin arriving at their winter roosts in the mountains of Michoacán around this date. It’s no wonder that people in Michoacán, mixing ancient indigenous traditions and more recent Catholic ones, associate the miraculous arrival of the butterflies with the return of the ancestors. The ecology of monarchs, with their migratory life history and metamorphic life cycle, fit right into the traditional cultural and spiritual imagery. 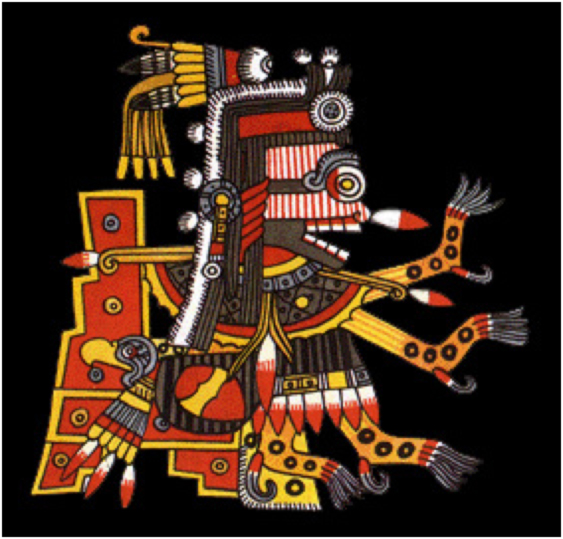 We are all travelers in time and space. My fall pilgrimage to Cape May reinforced a feeling of kinship with fellow wanderers and pilgrims of other species, monarchs and peregrines among the most iconic.