You are here: Home » Blog » Environment » Peregrination to Cape May for Hawks and Monarchs

Peregrination to Cape May for Hawks and Monarchs

October 14th, 2013. This was my annual pilgrimage to Cape May, New Jersey, which I’ve written about in past years.  I call it a “pilgrimage,” because it is a journey – although not too far, really – that for me has a ritual, sacred aspect.  I come here to tap into a bigger picture and a bigger pattern of life and the world.  Sometimes I get so focused on the daily duties and hassles at home, or the struggles and stresses of work, that I just need to clean that out of my mind from time to time. Watching the annual migration of hawks and butterflies here does that. That’s why I come every year I can. 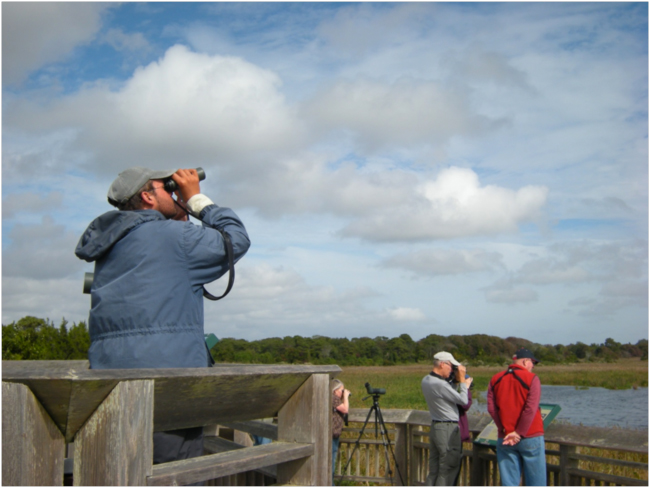 One week earlier I was driving around in the mountains of central Honduras, looking at forests and watersheds with Luis Caballero, with whom I was working on an assessment of climate change vulnerability and its relationship to biodiversity and ecosystem services.  Today I was standing on the hawkwatch platform at Cape May Point with a bunch of fanatical birders, watching the annual migration of hawks that passes here each fall.  There was a strong wind from the north, and a storm that had brought some heavy rain and wind over the last few days was finally clearing out. Not the best conditions for migrating hawks, but there were a few moving through.  A sharp-shinned hawk sailed by.  Higher up an immature bald eagle cruised south. Suddenly a pair of peregrine falcons dove on a group of ducks on the pond in front of the platform, and the ducks launched off the water in a splashing panic, which created an excited response from the gathered birders.

Both the English name of the peregrine falcon and its scientific name, Falco peregrinus, mean “wandering falcon,” referring to the migratory habits of many northern populations of the species. In Spanish, the translation of “pilgrimage” is “peregrinación.”  I’m inclined toward the Latin intuition of the meaning of this word.  Wandering journeys are always – even if they don’t start out with that intention – spiritual quests for those who undertake them, whether humans, birds, or butterflies.

Speaking of wandering journeys, monarch butterflies passed occassionally, fighting the wind.  Some hunkered on branches on the leeward side of the junipers near the picnic shelter, trying to warm up in the half-sun that broke through the clouds now and then.  A female carried a tag on her left hindwing. She was marked here yesterday by the Monarch Monitoring Project, and was lingering, waiting for better weather to cross the wide mouth of the Delaware Bay and head toward Mexico. 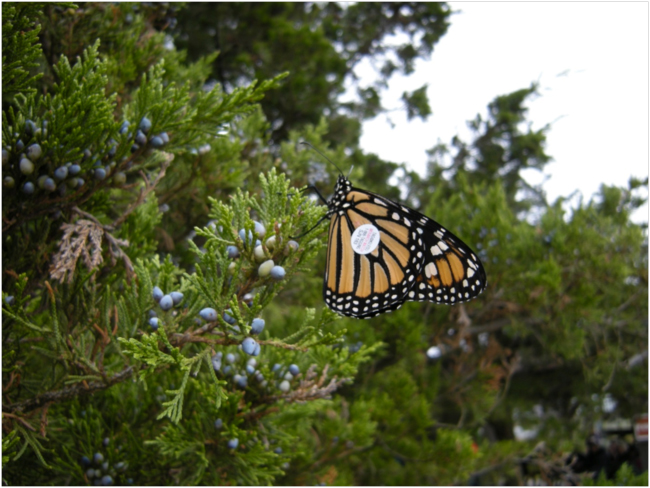 I talked to the director of the Cape May Monarch Monitoring Project, and also to this year’s intern, who conducts the daily counts and maintains the online database for the project.  Their report: the numbers of migrating monarchs are low this year.  Not the lowest ever, but low. 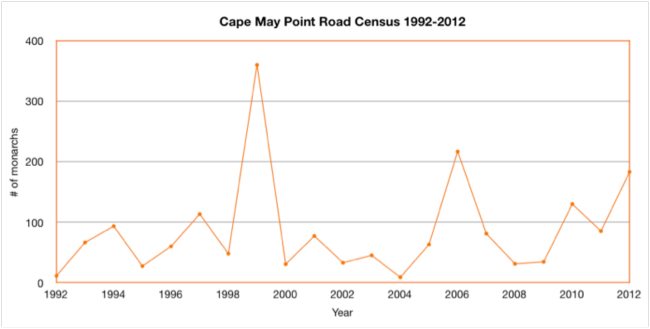 Cape May Monarch Monitoring Project data: average number of monarchs seen per hour for that year over the entire season

The Monarch Monitoring Project conducts a census of passing monarchs on a standard transect, and so can compare numbers from year to year.  Looking at the data on their website, it appears that monarch numbers at Cape May have been climbing back up from a record low in the fall of 2004.  That was the year when, in late February, I had visited the monarch winter roosting sites in the oyamel fir forests of Michoacán, Mexico.  That year the ground under some roosts was a carpet of dead butterflies, killed by unusually cold storms that blew through the mountains.  I helped Chip Taylor, a monarch expert at the University of Kansas, and his staff from Monarch Watch, sort and measure several gunny sacks full of dead butterflies, and look for tagged individuals. 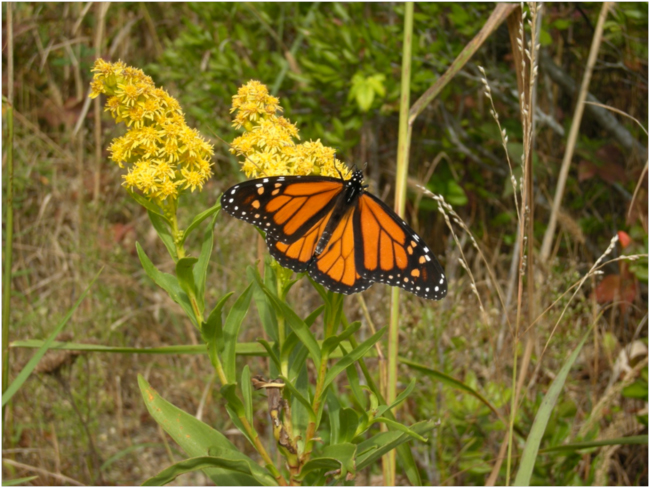 Barbara Kingsolver’s novel Flight Behavior  was published last year. I finally read it this summer.  In the novel, when the eastern migration of monarch butterflies ends up on a mountain in Tennessee instead of progressing to Michoacán, a young housewife’s life takes on a new direction and meaning. At first I found the story hard to get into, but when I finally made the breakthrough into the spell Kingsolver was creating, I was hooked.  The novel combines the science of climate change and the biology of monarchs with a spiritual quest and a love story of sorts.  Don’t miss this book, whether you are a scientist or a romantic. Or both.

My own personal efforts to support monarchs in their annual migration started in the summer of 2010, when I dug up some milkweed plants along a local bikepath, and replanted them in my garden.  As I described it then, it was my “field of dreams of monarchs” – as in the movie “Field of Dreams,” I somehow had the vision that “if you plant it, they will come.”  And they did. That year hungry monarch catepillars gobbled up nearly all the milkweed I planted, and one of the larvae spun a crysalis in plain view, and emerged as a butterfly on the morning of September 16th, while I was watching and photographing her.  In all, 18 larvae grew up in my garden, and flew off to Mexico in 2010.  Since then: nothing!  Not a single monarch larva has been seen in my garden in the past three years, despite the fact that the milkweed is now spreading and taking over, so that I have to weed it back from my corn, tomatoes, and peppers.  What this points out to me is the highly variable, spatially ephemeral, nature of monarch populations. They wander. Their numbers go up and down. And, so far, they survive.

The Japanese poet Matsuo Bashō, most famous for his haiku poetry, wrote in the introduction to his peregrinational, end-of-life journey Oku no Hosomichi (Narrow Road to the Far North): “Every day is a journey, and the journey itself home.” We are all wanderers, seeking home. And we all find it, here on Earth, although we may have to move around a bit to realize that wherever we are, this is our only, lonely, home planet.  Peregrinations, pilgrimages, are journays of moral and spiritual significance, journeys to “holy” places.  Monarchs at this time of year are aiming for their holy refuge in the mountains of Michoacán.  The hawks are seeking their refuges in the south, their seasonal home during the northern hemisphere winter.  I make an annual trip to Cape May.

For my previous posts on hawks and monarchs, see: