You are here: Home » Blog » Biodiversity » Cape May Hawks and Monarchs

Cape May Hawks and Monarchs

Friday October 12th, 2012. We drove north from Washington toward New York in heavy Friday traffic on Interstate 95, across upper Delaware Bay at Wilmington, and then down through the New Jersey Pinelands on a sunny, breezy mid-October day. Oaks, maples, sassafras, sumac turning to a fall palette of amber, saffron, vermilion, ochre, burnt umber. The weather map in the Washington Post this morning showed the “big picture”: a cold front pushing down from the northwest across the region, snow over Hudson Bay. It was a great day for driving to Cape May, the tip of the New Jersey peninsula south of New York and east of Philadelphia, famous for concentrating hawks and other migrating birds, and monarch butterflies, like a funnel as they move south on their annual fall migrations. 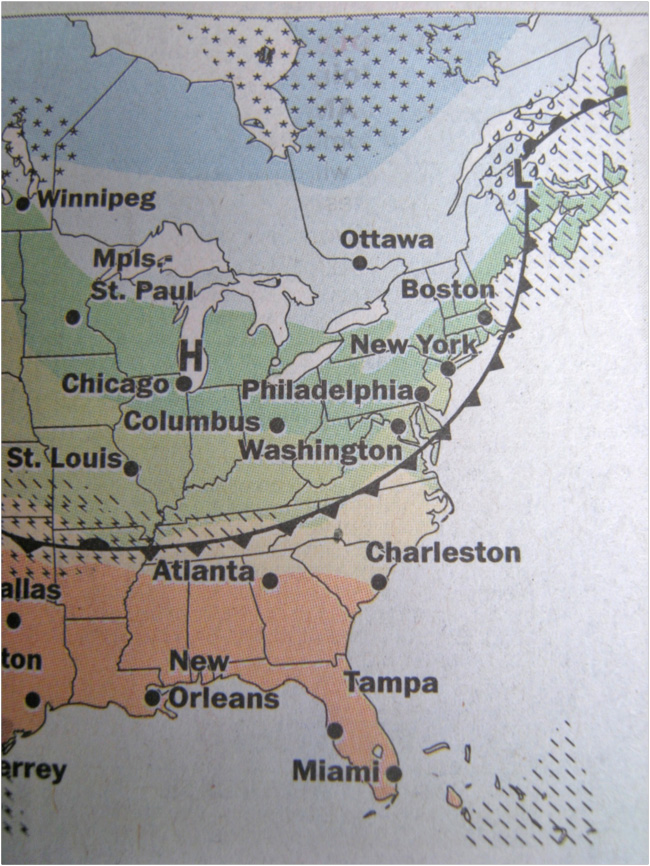 Saturday morning was calm and sunny at the hawk watch platform at Cape May Point when we turned our binoculars skyward. Clouds of swallows circled the pond, and an occasional gull winged by. The bushes were popping with Yellow-rumped Warblers. But there were no hawks. Nada. 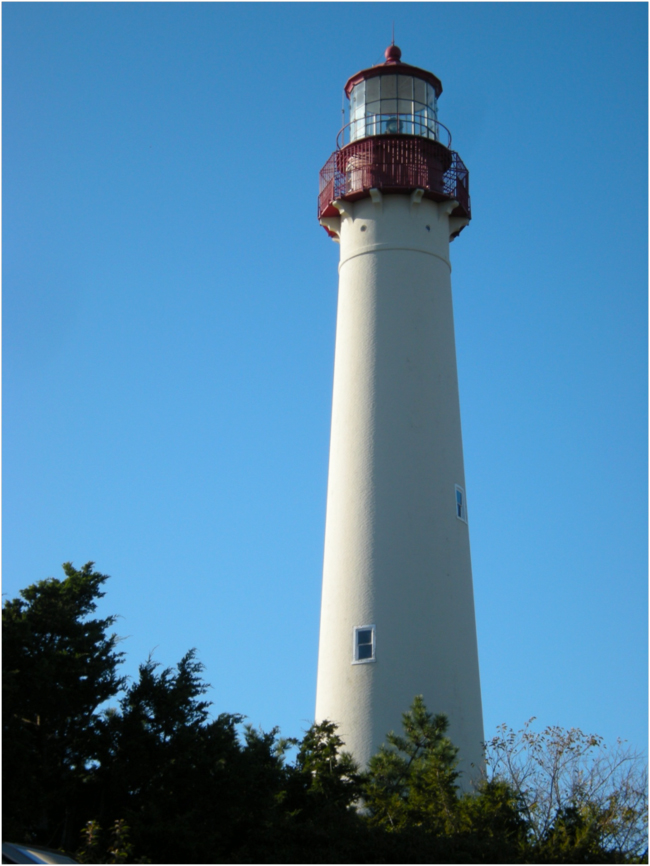 We looked at the count, posted on a board by the official hawk counters from the Cape May Bird Observatory, which tracks hawk numbers passing here each fall from September to November. Yesterday, Friday, as the cold front was passing through, a huge flight of some species was observed: 1847 Sharp-shinned Hawks, 324 Cooper’s Hawks, 1003 American Kestrels, 442 Merlins.

Today, they were mostly all gone, already off along the Virginia shore and southward toward their respective winter destinations and destinies. By the end of the day the official CMBO counters tallied 383 Sharp-shinneds, 51 Cooper’s, 6 Kestrels, and 7 Merlins – very low compared to the high numbers of Friday. 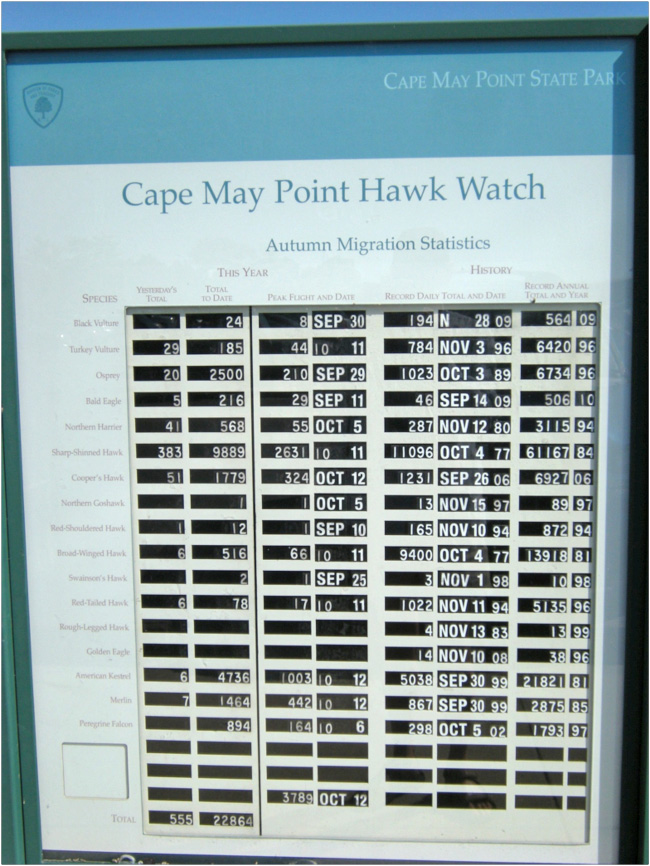 It’s always exciting to see a river, a flood, of birds going over this platform – I’ve seen that in many years past. But this was OK too. With no hawks, we were just as connected to the real migration as with a skyfull. We could imagine them flowing by yesterday in those winds that were blowing us, too, down the Cape May Peninsula. We could imagine them today, safely across the Delaware Bay, resting and loitering and moving on southward, as we loitered and rested here, after a summer of rushing and working and feeding. Ah, fall in Cape May!

The Cape May Monarch Monitoring Project has been watching the monarch butterfly migration here since 1992. Migrating monarchs get funneled to Cape May by the geography of the northeast coast just like hawks do. Some people from the project were demonstrating monarch tagging to a small crowd in the picnic shelter beside the hawk watch platform on Saturday. After the demonstration I spoke with Dick Walton, the director of the project. Dick said that this year seemed to be a good one for monarchs. The daily census has so far recorded an hourly average of around 180 monarchs at Cape May Point, and looking back through their data over the past 20 years, that average has only been exceeded twice, in 1999 and 2006. It is more than double the 2011 average of 85 monarchs per hour, and beats the 2010 average of 130. So at least in northeastern North America, monarchs seem to have reproduced well this year, and a large overwintering population is on the move toward the refuges in the mountains of Michoacán, Mexico. 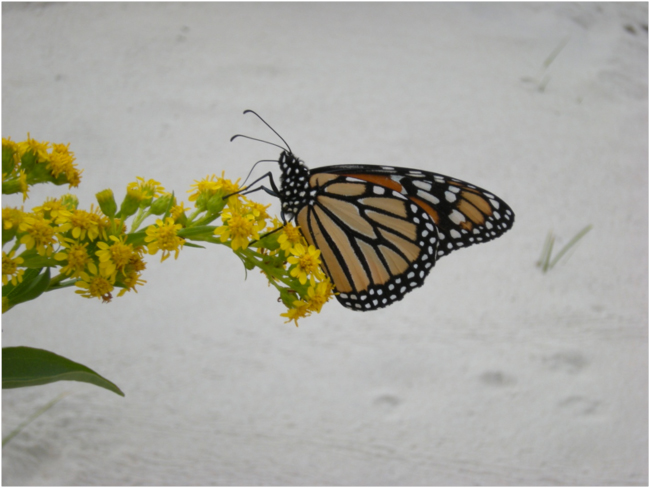 I started my annual “monarch log” to record observations in my yard in Falls Church, Virginia, on Monday, 23 July, with this entry: “late afternoon, male patrolling above milkweeds. Not landing, touching or tasting them, but perching on high vegetation and watching.” My interpretation of this behavior was that the male was watching and waiting at a likely place for a visiting female to mate with.

The log continued: “Wednesday, 25 July – another male, same kind of behavior, on a HOT (near 100 degrees) afternoon.”

Then: “Thursday, 26 July – about 11 AM, hot and sunny, female landing, tasting leaves of milkweed, and I thought I saw some egg-laying – that is, abdomen tip touched to underside of leaves while she clung to the edge.”

And: “Tuesday, 31 July – no caterpillars or chewed leaves visible… so I don’t know if the 26 July female was laying eggs or not.”

The milkweed I planted two years ago, which hosted such an active monarch population then, had spread this year, and lots of healthy plants promised a feast for monarchs. But the monarch “field of dreams” was deserted and sad. In September, when there had been so many hungry monarch larvae on my milkweeds two years ago, there were none. What happened to the monarchs in Falls Church this year? 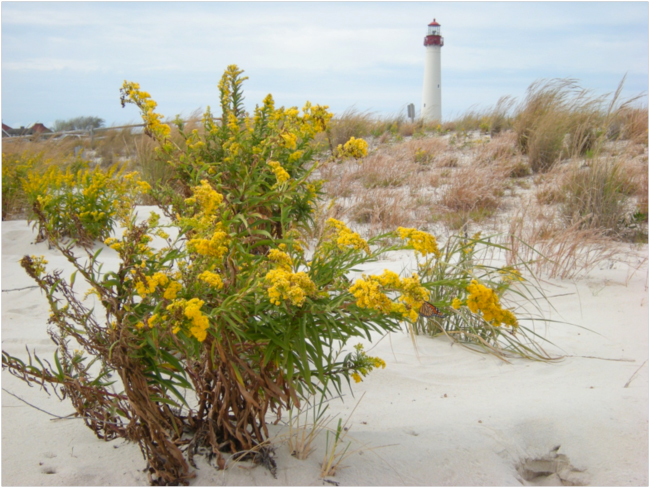 In ecology, and in life in general, a lot is due to “chance.” Living systems combine processes and relationships that are well understood with events that are intrinsically non-deterministic, sporadic, and random. This makes it very difficult to understand the behavior of complex ecological systems, much less predict them.

Lots of hawks on Friday; almost none on Saturday, Sunday, Monday. Lots of monarchs in northeastern North America this year; no monarch caterpillars on the milkweeds in my garden. A glorious weekend at Cape May. Another year passing in this surprising corner of Earth. Let’s love and take care of what comes to us by chance, even what we don’t understand.