You are here: Home » Blog » Biodiversity » Islands of Biodiversity in the African Sky: Golden Monkeys and Irish Potatoes

Islands of Biodiversity in the African Sky: Golden Monkeys and Irish Potatoes

September 2014. The view from my east-facing window at the Gorillas Hotel in Musanze before dawn was promising.  Even though Mount Muhabura was enveloped in clouds, the rest of the sky was clear.  After a quick breakfast we left for Kinigi and the headquarters of the Volcanoes National Park, where, each morning, groups of high-paying international ecotourists leave with their guides to visit groups of mountain gorillas.  Gorillas are the gold mine of tourism in Rwanda. This is the easiest and safest place in Africa to have close encounters with habituated family groups.  We weren’t going to see gorillas this morning, but I was excited anyway.

I was here to conduct an environmental threats and opportunities assessment for the US Agency for International Development (USAID), working under a contract with ECODIT, a small consulting firm based in Arlington, Virginia.  I had travelled to Musanze yesterday, via the Rugezi Swamp, with Emmanuel and Serge, two of the Rwandan consultants on the assessment team. The Rwanda Development Board, which manages Rwanda’s national parks, had given us permission to join a group that would track another of the charismatic primates found in the park, the golden monkey. 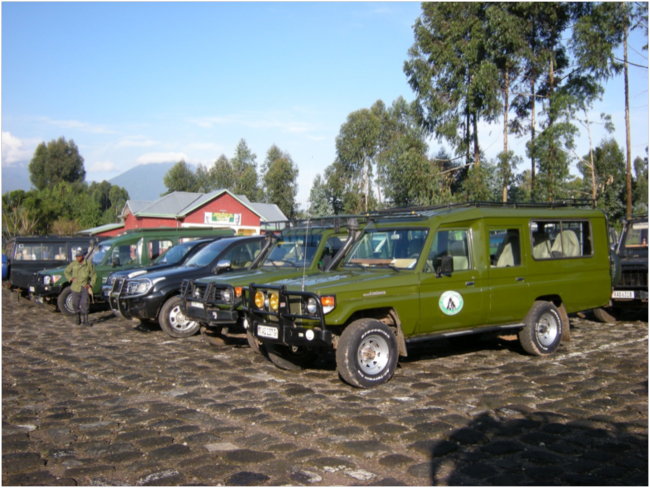 The parking lot at the Kinigi headquarters was jostling-full of big tour company Land Cruisers and similar vehicles, and groups of mostly upscale-looking tourists from all over the world waited around in the sun sipping coffee for their tracking groups to be organized and depart.  We were assigned to a golden monkey tracking group that included a large contingent of high school students from Brisbane, Australia. They were here in Rwanda working with World Vision, a Christian relief and development organization, for which they had raised $100,000 Australian dollars as a class project; this trip was a reward for their work. Our guides, Prosper and Fernando, were enthusiastic and knowledgeable – it turned out they had been trained by Serge, one of my Rwandan consulting team members, who had worked here in Volcanoes for the Dian Fossey Gorilla Fund International for five years. 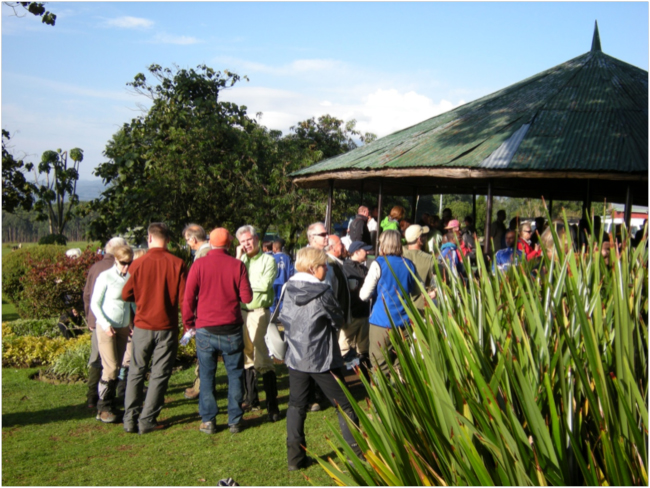 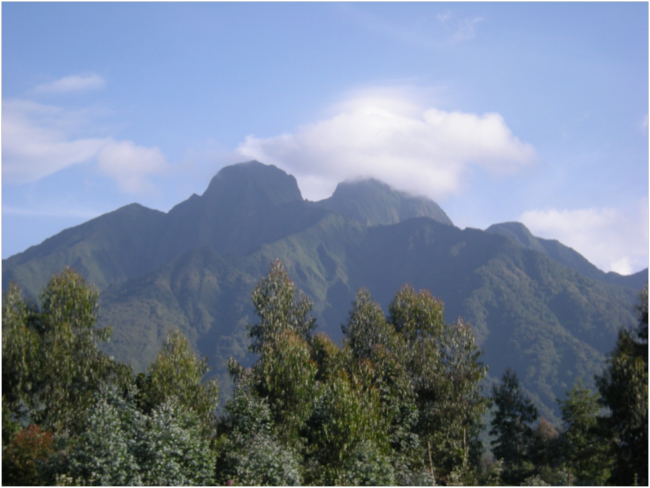 We finally left with our group, walking up toward the volcano called Sabyinyo – the closest of the seven Virunga volcanoes – on a sunny, pleasant morning.  Sabyinyo means something like “crooked teeth” in Kinyarwanda, the local language, and indeed the top of this mountain, almost 12,000 feet high, is toothy and jagged, not rounded like its younger and less eroded neighbors. We walked for a mile or so through intensively-cultivated fields.  The main crop was potatoes – called “Irish potatoes” here to distinguish them from sweet potatoes, which are a common traditional crop.  On the edges of the potato fields and in household gardens scarlet-flowered climbing beans grew up bamboo sticks, and maize lofted its wide grassy leaves. 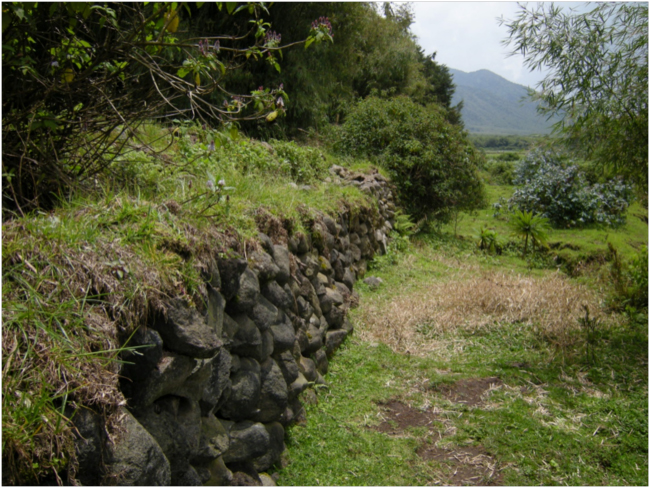 The perimeter wall of Volcanoes National Park above Kinigi Village

About the time when it got warm enough to shed an outer layer of clothing, we reached the edge of the national park, marked by an imposing wall of black volcanic stone.  The downhill, farm-facing side was nearly vertical, but behind it was a rambling rampart of rocks, meant to deter buffalo from coming out of the park into the surrounding fields. Volcanoes is what some people call a “hard-edged” park; there is no buffer zone, only a sudden transition from farmed fields to wild nature.  You can see this boundary on Google Earth as a sharp line.  Inside the perimeter wall a dense forest of tall bamboo started immediately.

A armed ranger – for the buffaloes, which can be very dangerous – met us there, and we followed a narrow path through the cool, moist bamboo thicket. Some of the stems were two or three inches in diameter, and it was quite dark under the bamboo canopy even on this sunny morning. After a half-hour climbing up through the bamboo we reached a small sunny clearing.  A group of trackers who had come early to find the troop of habituated golden monkeys we would visit met us there.  They had been in radio contact with our guides Fernando and Prosper, informing them of the location of the monkeys this morning, after they had awakened and started moving and feeding.  This was clearly a sophisticated wildlife tourism operation, which can virtually guarantee encounters with either gorilla or golden monkey groups. 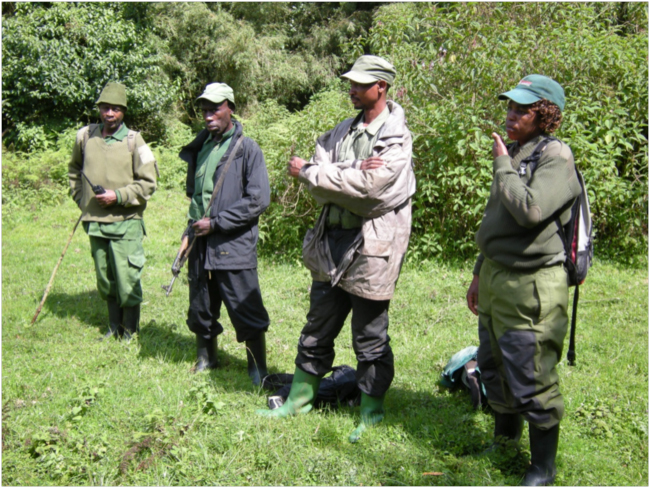 Rwanda’s biogeography blesses it with a rich mix of species from the Congo Basin rainforests to the west and the East African savannas to the north and east. Because of its mountainous topography and location at the Congo-Nile crest, climate changes through millions of years have caused the ranges of moist forest and dry savanna species to shrink and expand, and periodic isolation of animal and plant populations in “islands” of suitable habitat. This has led to the evolution of a large number of unique species whose ranges are restricted to the Albertine Rift crest, called Albertine Rift Endemics (AREs) by conservation-biologist cognoscenti. The eastern mountain gorilla (Gorilla beringei), golden monkey (Cercopithecus kandti), L’Hoest’s monkey (Cercopithecus l’hoesti), the Ruwenzori colobus (Colobus angolensis ruwenzori), and Grauer’s swamp-warbler (Bradypterus graueri) are among the dozens of AREs found in Rwanda. 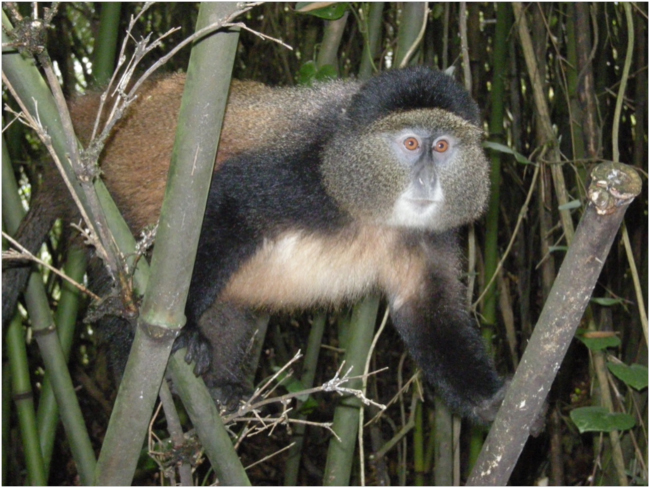 We left our backpacks and walking sticks in the meadow, and plunged into the trackless bamboo forest following the trackers and guides, dropping down into a steep ravine to the north.  They knew the feeding track of the golden monkey troop, and were positioning  us to be right where they would pass in a few minutes.  We came to the bottom of the ravine, and soon started to hear monkeys jumping through the bamboo overstory.  The first wave of the feeding troop passed over us. It reminded me of scenes from the movie Crouching Tiger, Hidden Dragon, with monkeys leaping from one tall, swaying bamboo trunk to another like Shaolin warriors. And then, suddenly, the troop was all around us, descending from the canopy, moving along the ground, digging up bamboo shoots, seemingly oblivious to our presence.  They sat and peeled the sharp white shoots and munched them like carrots or breadsticks, only a few feet away.

From time to time some of the monkeys would make a low, grunting, pig-like “ghrugh-ghrugh” sound.  One of the trackers near me would answer with the same sound, and I asked him about it, what it meant. In golden monkey language it is a contented, “it’s OK, relax” vocalization, he told me.  For the most part it was a relaxed encounter between our two primate species, after my initial surprise at being surrounded so closely by feeding monkeys who seemed almost oblivious to our presence.  “Ghrugh-ghrugh!”  Only at one point was some consternation caused when a monkey passing above us peed on one of the Aussie World Vision teenagers. 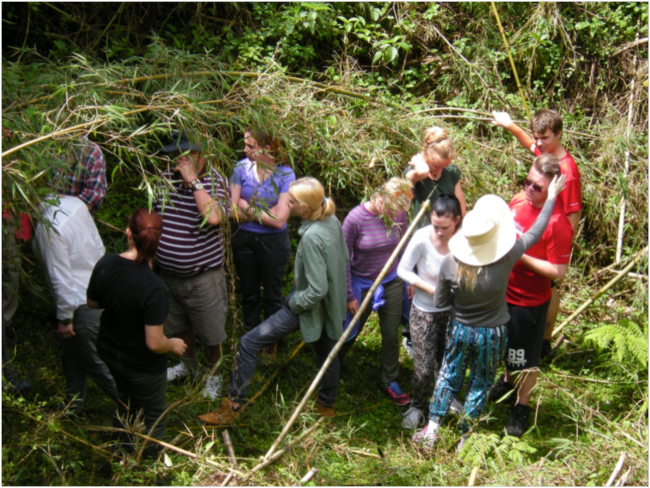 A golden monkey’s view of the Aussie teens

We followed the group downhill, and in an opening in a ravine they continued to pass by and over us.  Above the ravine here there were two matted platforms in the tops of bamboos, bent over, broken off, overgrown with vines. These seemed to be grooming stations, where groups of juvenile monkeys gathered and picked through each other’s fur, looking for ticks and burs, combing the long, beautiful golden mantles, belly fur, and armpits of their peers with their primate fingers. This social grooming was mostly a mellow, sunny, relaxed social ritual, but sometimes when a new individual would arrive there was jabbing, sparring, wrestling, tussling, rumbling – until everyone sorted out their social station, relaxed, and settled into grooming again.

Rules established by the national park to protect the monkeys specify that tourist groups can spend no more than one hour a day watching one of these habituated monkey groups.  The idea is that the monkeys might be distracted from their normal feeding or other social behavior by the weird, ground-bound primates following and gawking at them.  Our guides enforced this rule rigidly, and in one hour we had to leave.

I left feeling spellbound by the encounter.  It was unimaginable in advance and magical in the moment – something in that “once in a lifetime” category.

We picked up our knapsacks and walking sticks in the meadow, and dropped down through the bamboo zone.  It was only mid-morning when we climbed over the rock wall, out of the park, and into the potato fields.  By now the harvest was in full swing, with big groups digging potatoes and bagging them for transport and sale.  “Hello!” called the kids in their high voices; “Good morning!” This area is the main area for commercial production of “Irish” potatoes in Rwanda, supplying the whole country and with exports to neighboring countries – Tanzania, Uganda, and the Democratic Republic of Congo. 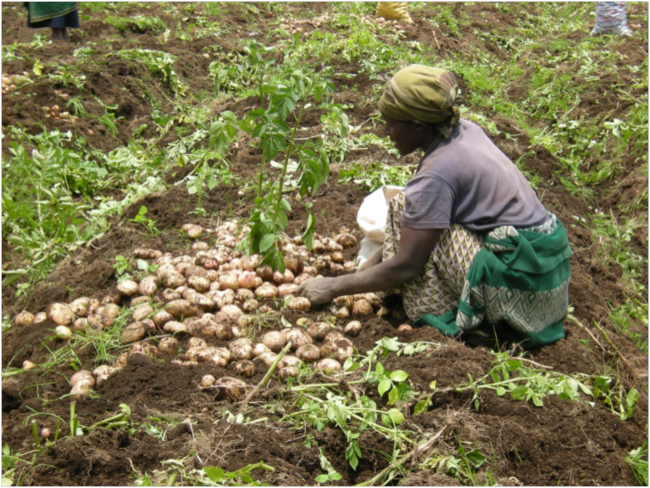 It seems so strange, all of the improbable connections. This island of endemic African biodiversity, home to mountain gorillas and golden monkeys, is also an island of Irish potatoes in central Africa, themselves the product of domestication half a world away in the high Andes, and staple food of my Irish ancestors who were forced to emigrate to America when the potato blight struck in the 1840s.

A big black storm had been brewing over Muhabura Volcano and slowly moving toward us as we hiked back to Kinigi. Just as we reached our vehicle the rain struck, preceded by strong, gusty winds. It poured – not quite as hard as I’ve ever seen in my life, but almost. There were bits of ice, hail, breaking on the windshield.