Islands of Biodiversity in the African Sky – The Nyika Plateau

April 2013. In a previous story I wrote about the archipelago of mountain ranges that scatters across eastern Africa between Mount Kilimanjaro in Tanzania and the Drakensberg Mountains of South Africa.  These East African mountains are a Galapagos of speciation and evolution, each range a biodiversity “hotspot” from the point of view of unique, endemic species – those found  no where else on Earth.

One of these mountain islands rises in the miombo woodlands of northern Malawi, now protected as the Nyika National Park. The “core” of the area is a plateau of Afromontane grassland at around 2,000 meters in elevation, and this area was protected by colonial authorities starting in the 1940s. The park boundaries were expanded in 1978 by Malawi’s first president, Hastings Kamuzu Banda, to include a belt of woodlands below the grasslands.  From an ecological perspective that was important because it secured the ecological linkages between the grasslands and woodlands.  But there were many villages in the woodlands, and many people were forced to move when the park was expanded. Their descendents settled, and still live, in a crowded belt around the boundary of the park.  And in many cases they are still bitter about the move, and still consider the woodlands inside the park boundary to be their traditional lands and resources.

As we drove toward Chelinda Lodge in the middle of the park late on a very wet afternoon in March, Sydney – “like in Australia,” was the way he explained his name – the driver for the Malawian consulting firm that was working with us on this evaluation of USAID biodiversity projects, pointed to an old road heading into the woodland.  His primary school had been up there, he said.  The village where he spent his young years had been nearby.  His relatives are among those now resettled into the belt of crowded villages ringing the park.  He seemed calm and philosophical about it all, but I wondered what he really thought.  I would never know, because whatever he thought it would be tempered by the typical, gentle politeness of Malawians. 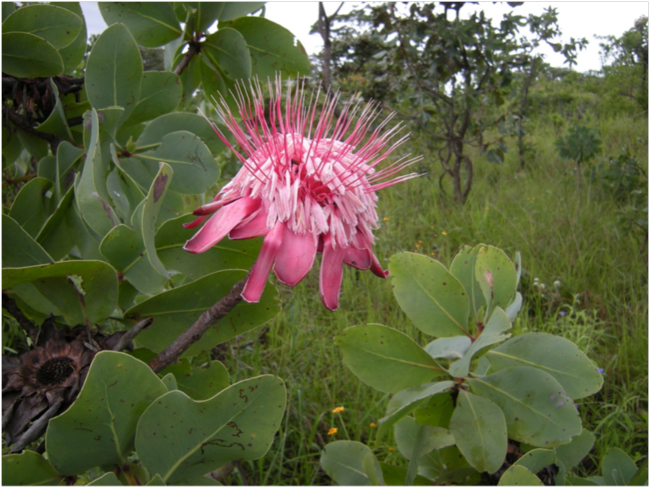 The road between the Thazima Entrance Gate and Chelinda was in terrible shape now, at the end of the rainy season, muddy and slick, with deep ruts and puddles filled from yesterday’s heavy rain.  In the thick wet miombo woodland just above the park gate a bushy Protea species, Protea angolensis, with pink flowers was common. For one long section the road forms the Malawi-Zambia border, and we could look off across the grasslands of Zambia’s sister national park, also called Nyika. This is the main route for tourism in the park, and its terrible condition was anything but tourist-friendly.  We couldn’t imagine that many international tourists would be willing to brave this mud track to see a few zebra, eland, and roan antelope, even given the unique scenery.  At one moment the Kulera Project vehicle ahead of us suddenly skidded up and onto the roadcut, precariously propped with one back wheel in the air. We joked later that with some pushing from the Evaluation Team, things were soon back “on track.” 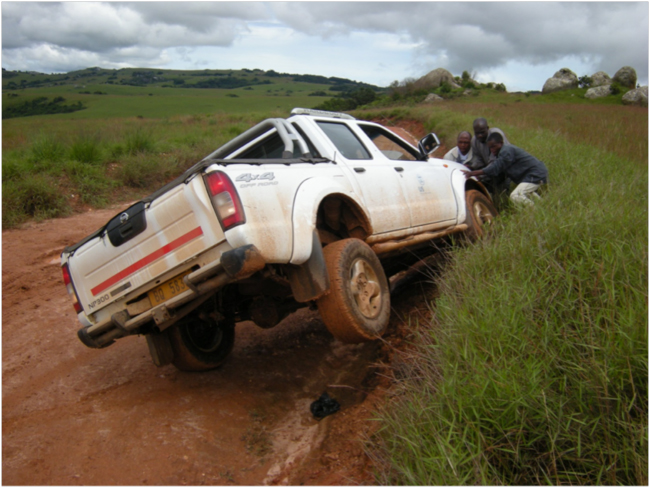 Getting back on on the road after spinning out

A night spent at Chelinda Lodge, a rustic, almost chalet-style lodge in the middle of the park, was an “endemic,” unique experience in itself.  We went to sleep in our pine-log cabins by a crackling pine fire that took the chill off the cold night, the smell of pine smoke a surreal artifact of the huge plantation of Pinus patula, an introduced  pine from Mexico, that was planted here in the middle of these Afromontane grasslands by colonial-era foresters.

Also surreal was waking up at 5:30 AM to drive the muddy roads around Chelinda, looking for animals with a bright electric spotlight: roan antelope, eland, bounding reedbuck, and zebra, each with its signature color of eyeshine. Most strange of all were the silver spots streaking and dipping in the spotlight – eyeshine of flying nightjars. As dawn came the antelope emerged around their bright yellow eyes into solid brown shapes. We could begin to see in the dawnlight the white ocean of fog below, surrounding this island of grass.  At Chosi Peak, the third-highest point in the park at 2,383 meters, we stopped for a chilly rustic breakfast of coffee, fruit, and cake before heading back to Chelinda.  It was barely 7AM.

According to the Bradt Guide to Malawi, the Nyika Plateau is home to three endemic butterfly species, one chameleon, one frog, and one toad, as well as endemic subspecies of a number of birds.  It is known for orchids:  over 200 species are found here, 11 endemic. An endemic subspecies of the plains zebra, Equus burchelli crawshayi, is found here, apparently isolated after they wandered up from the plains of Zambia or Tanzania long enough ago to have evolved subspecific-level differences. The “Crackling Cloud Cisticola,” Cisticola ayresii,  found nowhere else in Malawi, lives here.  I love to imagine that tiny, sparrowlike bird flitting contentedly and thoroughly at home, as the “crackling clouds,” these black thunderstorms we were experiencing, sweep the open grasslands. 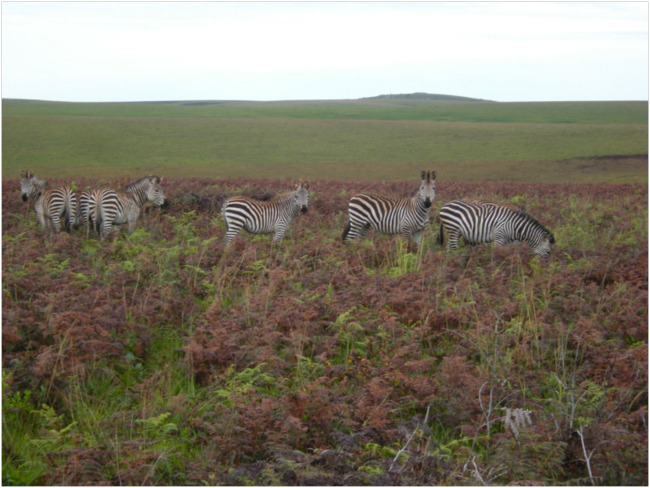 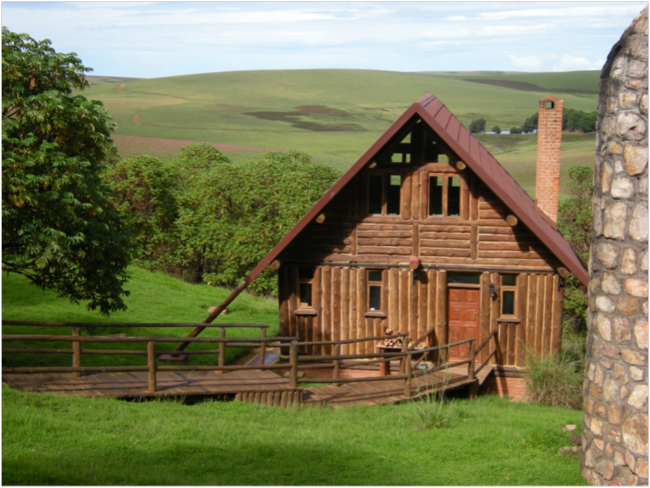 A cabin at Chelinda Lodge

After our somewhat surreal sojourn to the grassland heart of the Nyika Plateau, we descended to visit the villages clustered around the boundary of the national park. We passed the ghost locations of Sydney’s school and natal village, elephant dung on the road here now.  We crossed out of the Thazima Gate into customary village lands.

Matupi Village, one kilometer from the southern boundary of the park

Talking to the residents of Matupi Village, and Nkhamayamaji Village, the gulf opened up in my mind.  These sincere, hardworking people, respecting the boundaries of the national park to a degree I can hardly believe, whose land was taken with the blessing of their traditional leaders at the request of Malawi’s first president to expand the national park. The zebra, eland, roan, and reedbuck, roaming the fringes of a colonial plantation of non-native pines near an expensive, otherworldly tourist lodge that only a desperate tourist would go to if they knew the condition of the road to get there.

What is the way forward to close this gulf between the biodiversity of the Nyika Plateau and the aspirations of the Malawians who live in these beautiful, simple villages on the edge of park?  This is a laboratory for learning how to move toward a world where unique biodiversity can coexist with human aspirations.  It will be a tough puzzle to solve, but let’s get started learning.