Islands of Biodiversity in the African Sky – Mulanje Mountain

April 2013. An archipelago of mountain ranges scatters across eastern Africa between Mount Kilimanjaro in Tanzania and the Drakensberg Mountains of South Africa.  Most of these mountain blocks rise 2,000 meters or more – some to over 3,000 meters – above surrounding lowlands that average a few hundred  meters in elevation.  The mountains intercept Indian Ocean monsoon moisture coming from the southeast and force it up, creating rain and a wet microclimate on their eastern and southern flanks, and a rainshadow climate on the lee sides to the northwest.

The northern section of this mountain chain is called the “Eastern Arc,” stretching from the Taita Hills in southern Kenya, through the Pare, Usambara, and Udzungwa Mountains of Tanzania.  Similar mountains reach across Malawi from north to south.  These East African mountains are a Galapagos of speciation and evolution, each range a biodiversity “hotspot” from the point of view of unique, endemic species – those found  nowhere else on Earth.  Scientists believe that the forests cloaking these scattered ranges have existed here for over 30 million years, and were once connected to the forests of the Congo Basin and West Africa. As climate changes washed across Africa, these ranges acted as islands in a sea of alternating drier and wetter climates.  In wetter periods, forests spread across the lowlands and connected species living in the mountain forest islands. When the climate dried the forests shrank back to their moist mountain refuges and populations of species that had once interbred became genetically isolated. Many of these mountains support a unique type of high-altitude grassland and heathland in their higher elevations. 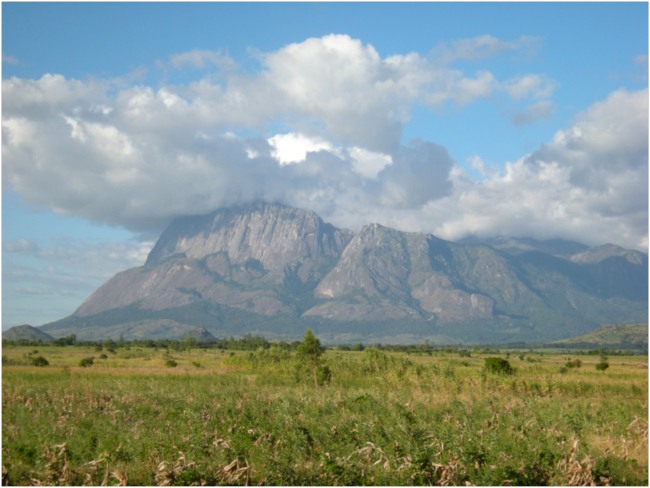 Mulanje Mountain is one of these mountain islands, rising in a bend of southeastern Malawi with Mozambique to the south and east. We were visiting the Mulanje area because one of the two USAID-funded projects we were evaluating works in communities bordering the Mulanje Mountain Forest Reserve. The Forest Reserve was proclaimed in 1927 by colonial authorities, and its protected area status has been maintained after independence. The project is called MOBILISE – Mountain Biodiversity Increases Livelihood Security, an it is being implemented by a Malawian NGO, the Mulanje Mountain Conservation Trust.

Like other East African mountains, Mulanje has its share of species found nowhere else.  Perhaps the most notable is the Mulanje Cypress, Widdringtonia whytei, which was declared the national tree of Malawi by the country’s first president, Hastings  Kamuzu Banda.  Often called the “Mulanje Cedar” by people in the area, this species is a member of the plant family Cupressaceae, the cypresses, to which redwoods, junipers, and cedars also belong.  The Mulanje Cypress is one of four species of “African cypresses,” all restricted to the eastern and southern Afromontane, and it is very closely related to Widdringtonia nodiflora, the Mountain Cypress, which is also found on Mount Mulanje.  Its closest relatives other than Widdringtonias are the Alcerce, Fitzroya cupressoides, of the Andes of Argentina and Chile, and Diselma archeri of Tasmania.  The biogeography of these trees shows clearly that they have been riding the mountains of the wandering fragments of Gondwana, the great southern mega-continent, since it broke apart about 200 million years ago. 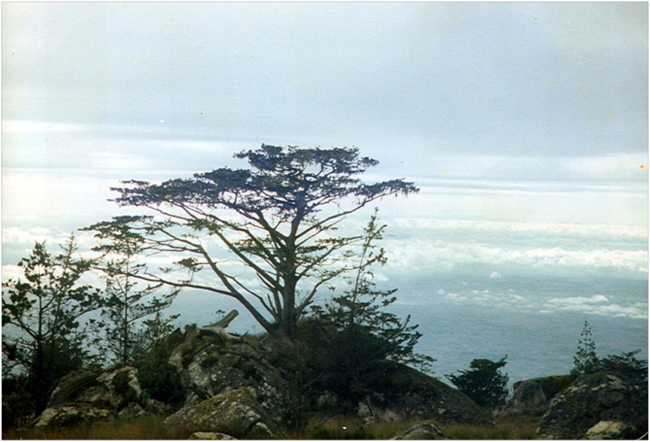 Despite is ancient pedigree and Gondwanan survivor status, the survival of the Mulanje Cypress is now threatened because of a combination of its unique and valuable wood, its relatively small population restricted to Mulanje Mountain, and its finicky reproductive ecology.  It is listed as “endangered” on the IUCN Red List.  It’s wood is straight-grained and resinous, easy to work, and resistant to water, insect damage, and rot.  It is, or was, in high demand for building fishing boats on Lake Chilwa, not far to the north, and even on Lake Malawi.  Mulanje Cypress loggers,  operating at first legally under permits from the Forest Department, and now mostly illegally, have cut the large old trees in the cypress groves on the mountain.  The first assessment of the status of Mulanje Cypress since 1994 was conducted by the Mulanje Mountain Conservation Trust a few years ago.  The study found that cypress stands currently cover an area of approximately 850 hectares, and that about 600 hectares had been lost only in the last 15 years, a decrease of around 40% in that short time.

At the lodge where we stayed on the flank of the mountain above Mulanje town, a craftsman was selling hand-carved boxes made of cypress wood.  He buys the wood from the Forest Department, he said, when they auction it periodically after confiscating it from the illegal cutters. The craftsmanship of the boxes was beautiful; the smell of the wood was heavenly. 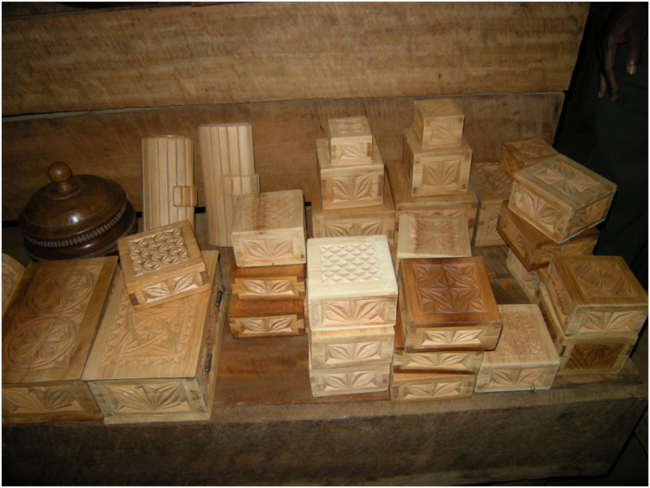 Ecologically, the Mulanje Cypress maintains itself in a delicate relationship with fire.  Paradoxically, this fire sensitive tree needs periodic fires at long intervals to enable it to become established and compete against other evergreen forest trees. Its seedlings germinate and grow best in recently burned areas, and don’t tolerate shading – but they are killed by fires.  If fires are too frequent, not enough young trees survive to replace the old ones that are cut or die; if fires are too infrequent, baby Widdringtonia  whytei can’t make it.  The ideal fire frequency for the Mulanje Cypress seems to be once every few hundred years.  Conservation scientists working with the Mulanje Mountain Conservation Trust are trying to understand this delicate fire ecology so it can be mimicked and used in conservation of the cypress groves on the mountain. The rapidly increasing human population around the base of the mountain has increased the frequency of fires that spread to high elevations where the cypresses grow. Firebreaks on the mountain may help; controlled burning may help; outplanting of seedlings grown in nurseries may help. 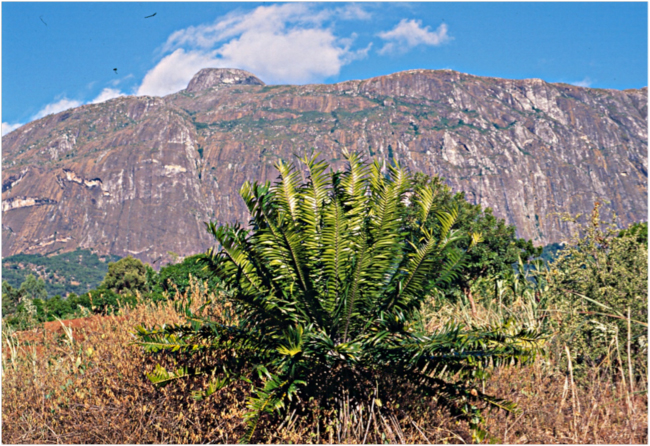 Another endemic species, the Mulanje Cycad, Encephalartos gratus, is severely threatened by distruction of its natural habitat in the foothills of Mulanje Mountain. A recent study discovered that the also-endemic Mulanje Tiger Moth feeds only on this cycad. The moth and cycad are bound in a coevolutionary dance with extinction in their small remnant habitat here. The fate of both species depends on conserving the cycad. Mulanje Mountain Conservation Trust is growing cycads by the hundreds – they are easy to grow from seed – for outplanting by anyone who wants them. 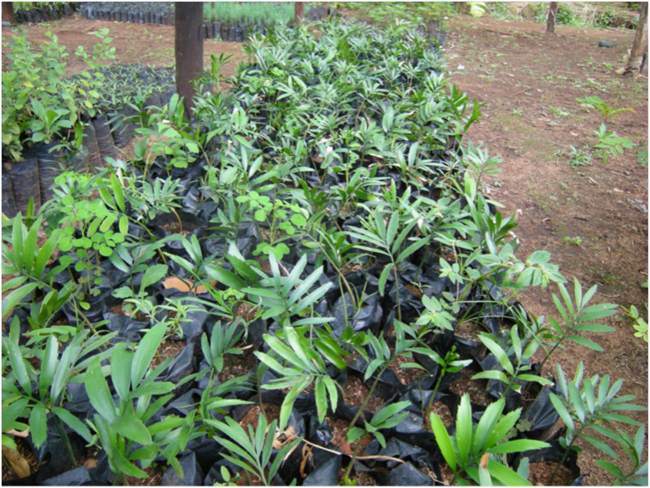 The striking Mulanje Tiger Moth echoes the colors of the Monarch butterfly of my own home continent, their bright orange-and-black “tiger” coloration a warning to potential predators to think twice and stay away.  The Monarch backs up its warning colors with a body full of toxic glycosides that it gets from its larval host plants, milkweeds.  It turns out that the Mulanje Tiger Moth also stores away glycosides from the cycad to enforce its warning coloration. When I try to think about the meaning of this amazing case of convergent coevolution, my head just starts spinning. 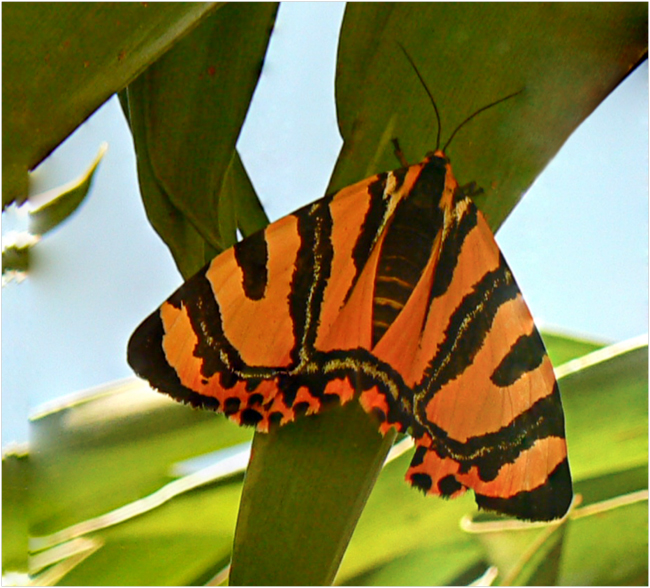 Two tree species besides the Mulanje Cypress are apparently endemic to Mount Mulanje, as are a chameleon, two geckos, a rodent, and three butterfly species.  But the poor local communities living around Mulanje Mountain don’t have the luxury of worrying about the global value of the unique biodiversity of this place, which so captures the interest of well-off conservationists living on other continents.  The mountain is far more important to these local residents as the source of ecosystem products and services than as a global biodiversity “hotspot.” 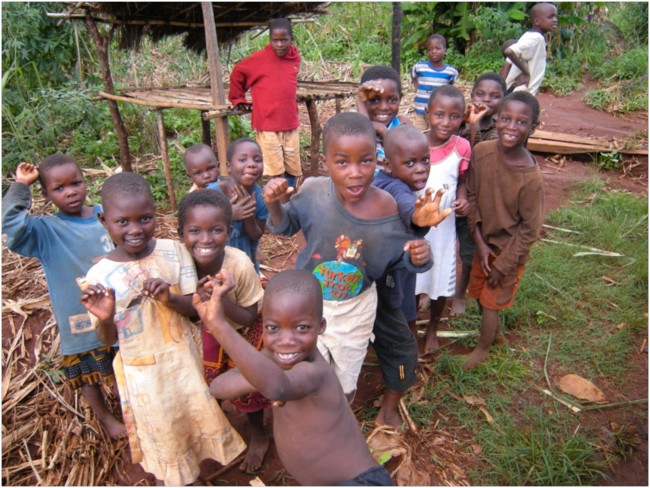 In an era of climate change, the hydrological services provide by the biodiverse grasslands and forests on the mountain are especially valuable and important.  Mount Mulanje is a “watertower” rising above the woodlands and plains, feeding the rivers that nourish the farming villages below. On a day when we drove around the southern flank of the mountain in the rain, waterfalls were pouring off it everywhere.  In the thirsty, dusty dry season, the permanent streams flowing from the mountain are the lifeblood of these communities on its flanks. 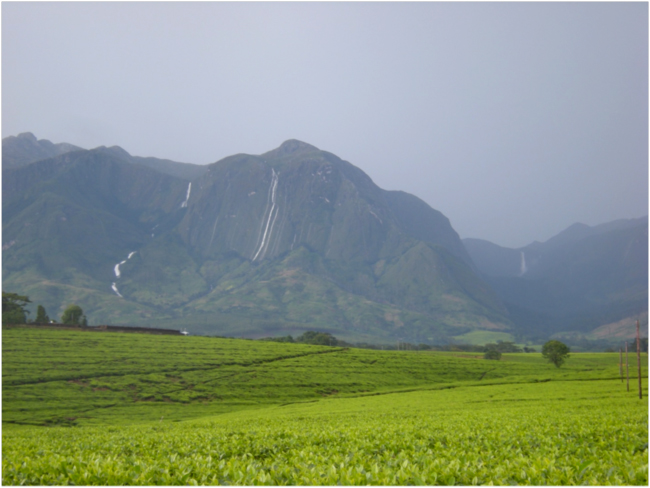 But how do we connect the cypress, the cycad, the moth, and the other endemic species with these essential ecosystem products and services that local people recognize and value?  This is the big question. The unique, endemic biodiversity of Mulanje Mountain is the source of is waterfalls and rivers. All those leaves, those plants, those ecological communities, coevolved from their hundreds-of-millions-of-years evolutionary journey together, are the source of the wood, the fruits, the mushrooms, and the water that local people depend on.

The bright-faced children. The cypresses, the cycads, and the moths.  All of them are part of the same “village.”  Can these various villagers coevolve their way to a shared future?  This is the big question for me right now. 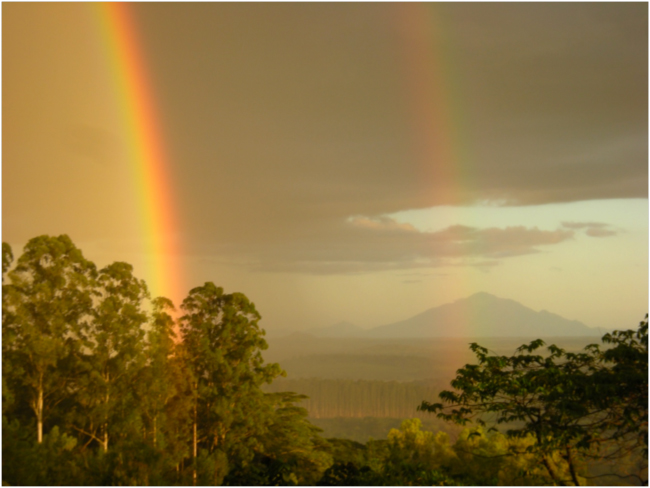 For earlier stories about monarch butterflies, read Field of Dreams of Monarchs and A Pilgrimage to the Monarch Butterfly Overwintering Refuges in Michoacán, México.