June 2012. The Udzungwa Mountains rise steeply above the valley of the Kilombero River, their eastern face almost an escarpment. These are one of the mountain blocks of the ancient Eastern Arc Mountains, which stretch from the Taita Hills in southern Kenya, and include the Pare, Usambara, Uluguru, and Udzungwa Mountains of Tanzania. Scientists believe that the forests cloaking these scattered ranges have existed here for over 30 million years, and were once connected to the forests of the Congo Basin and West Africa.

As climate changes washed across Africa, these ranges acted as islands in a sea of alternating drier and wetter climates. In wetter periods, forests spread across the lowlands and connected species living in the mountain forest “islands.” When the climate dried the forests shrank back to their moist mountain refuges and populations of species that had once interbred became genetically isolated. The Eastern Arc Mountains are, in an evolutionary sense, a Galapagos of mountain-islands, where processes of speciation have pumped out new species on each of these mountain blocks, with sibling species on the other ranges. Because of their unique geological and evolutionary history, the Eastern Arc Mountains are a global biodiversity “hotspot,” with high species diversity and high levels of endemic species – species found in a restricted range, and nowhere else. 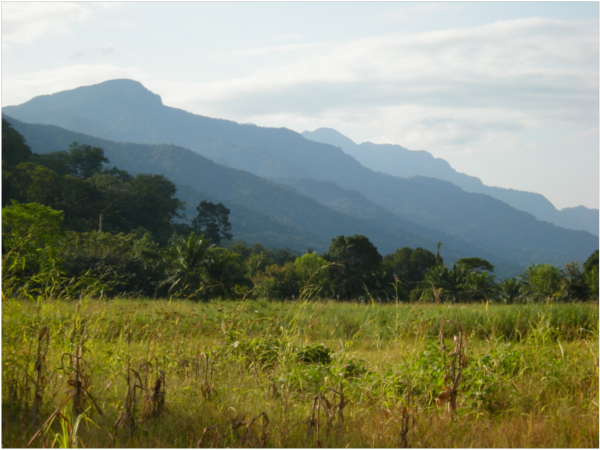 Udzungwa Mountains from the road in to Hondo Hondo

We had skirted the dry, rain-shadowed northwestern side of the Udzungwas on our way up the Ruaha River Gorge to Ruaha National Park a few days earlier. The Udzungwas are protected in the Udzungwa Mountains National Park. Tonight our four-person team of biologists and social scientists was settled below the steep eastern front of the mountains, sipping sundowners on the lawn at Hondo Hondo, a tented eco-lodge near the Mang’ula entrance to the national park. As we enjoyed our respective libations, a large troop of Udzungwa red colobus monkeys, one of the endemic species of this range of the Eastern Arc, fed on fruits high in the forest canopy at the edge of the camp. Human punk rockers with purple mohawks of a former era have nothing on these brashly redheaded primates. When the light faded to a certain level, the troop rapidly left the food tree, scrambling along big branches to a night roost in another huge tree. 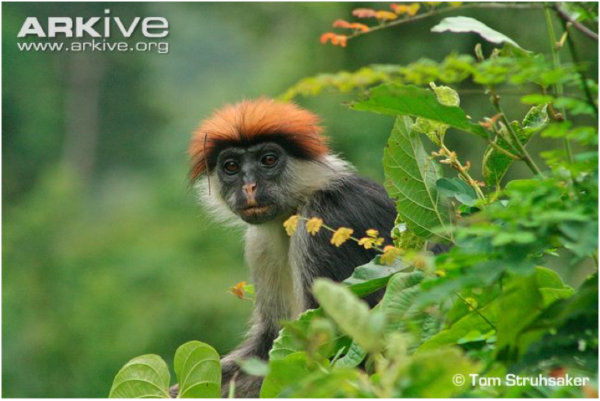 Our purpose here was to understand the challenges of conserving these unique mountain forests and species, and the unique wetlands lying below them, while also supporting the livelihoods and development of the people living in communities at the edge of the valley and mountains. So after breakfast we drove south along the mountain front and out into the Kilombero Valley – the largest freshwater wetland in East Africa, which was designated as Tanzania’s third Ramsar Site – a Wetland of International Importance according to the United Nations – in 2002. We stopped in Ifakara and met with the Chief Executive Officer of the Kilombero District and her staff to talk about the issues and problems. Then we drove south to the Kilombero River, where a gate blocked the trucks, cars, and bicycles waiting for the ferry to cross from the other side. When the ferry finally arrived on this side, discharging its motley load of pedestrians, bicyclists, trucks, and SUVs, we walked down the sloping road to the river’s edge to the small boat belonging to Sokoine University of Agriculture’s Kilombero Wetlands Project. Professor Pantaleo Munishi, a member of our assessment team, was in charge of that project. We headed out on the boat for a short tour of the river and wetlands. 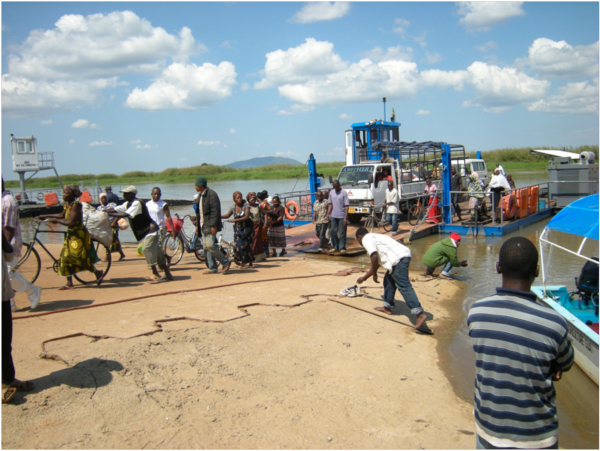 On the river in the Kilombero Wetlands Project boat 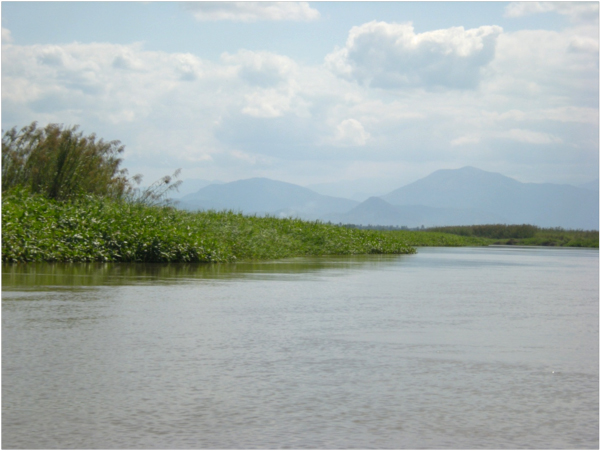 Udzungwa Mountains from the Kilombero River

From the river we could see the distant Udzungwas, at whose foot we had slept. The water in the river was down many meters below the banks now, a month or more into the dry season. We were tuned to the birds everywhere along the banks — flashy Malachite, Pied, and Giant Kingfishers, and White-fronted and Little Bee-eaters – but most especially to an endemic species, the Kilombero Weaver, Ploceus burnieri, found only here in this wetland and nowhere else on Earth.

Kilombero Weavers were flitting everywhere in the tall reeds along the river. We were surprised by their local abundance, knowing of their rarity and uniqueness. Kilombero, and other inland valley wetlands in Tanzania, may have acted like the wetlands equivalent of the mountain islands of the Eastern Arc, persisting through cycles of climate change, acting as refugia for wetland species, and pumping out endemic species through the process of allopatric speciation. As our boatman dodged the sandbars in the river I thought I caught a glimpse of another of the endemic species found here, the Kilombero Cisticola, clutching a tall swaying reed – but could not be a hundred percent sure. After our tour of the river and wetland we drove back to Hondo Hondo for another evening of watching the Udzungwa red colobus troops go to their roosts at sundown. “Hondo Hondo” means “hornbill” in kiSwahili, and several species of hornbills are common here, their distinctive flight pattern and calls defining the place. Elephants passed through in the night, arousing the camp staff to chase them off, and alarming our citified Tanzanian team member Zakiya, who was afraid even to peek out of her tent to see what the commotion was about. In the morning, after breakfast, we travelled a few kilometers north to Mkula Village, where our assessment team member Zakiya, with the help of the Community Conservation Warden from the Udzungwa Mountains National Park, had arranged a rendezvous with the local government water engineer, Mr. Assenga, in charge of the irrigation works that USAID was proposing to expand as part of its “Feed the Future” Program. We had learned already, from the Head Warden and staff of Ruaha National Park a few days earlier, about the environmental “train wreck” of irrigated rice expansion in the Usangu Wetlands, supported by international donors in the late 1980s and early 1990s, which dried up the Great Ruaha River, and so we wanted to see the situation here in the Kilombero Wetlands for ourselves. We turned off the main road that runs from Mikumi to Ifakara, down into a crowded, bustling village. Another morning was starting, and chickens and children ran between the brick and thatch houses. Breakfast cooking fires were dying down, and people were heading off to the day’s tasks. Mkula is sandwiched in a narrow strip of densely inhabited land between the national park and the gigantic private Kilombero Sugar Company estate, owned by a South African company, Illovu Sugar, which sprawls toward the Kilombero River. Mr. Assenga, the Ward Water Engineer, led us back up across the main road, where we followed a cement-lined irrigation canal a hundred meters through the forest to a concrete dam across a small, clear stream rushing down from the mountains. Here water was diverted into the village irrigation works. Assenga tossed out statistics: how much water this diversion dam was designed to take from the stream, how many hectares of rice this was designed to irrigate. Their hope, he said, is to increase the irrigated area by 150%, from 100 hectares to 250 hectares. If the District Water Engineer who designed this irrigation works in 1979 was right, there should be enough water, Assenga said. We wondered what hydrological monitoring data that water engineer used, more than thirty years ago, to design the capacity of this system. We were skeptical, to say the least. No water monitoring equipment was in evidence today. 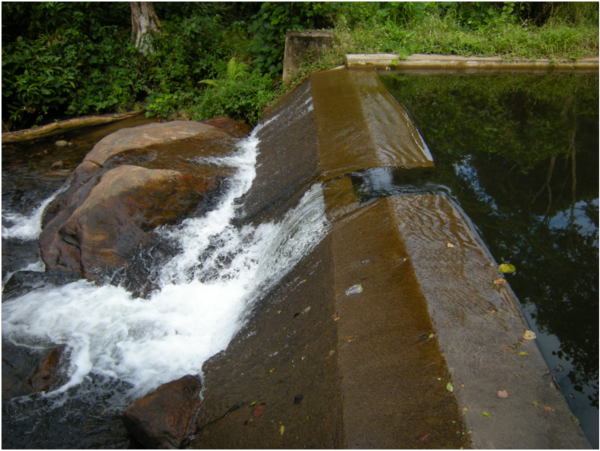 From the dam, we followed the diversion canal back through the village and out into the ricefields. The harvest of the previous wet season crop was nearly completed, and the hulling mill in the village was busy, with big bags of rice being filled for transport to market. Muddy fields were flooded for the second planting, and groups of women were transplanting rice seedlings. After it floods these fields, nourishing rice, what water is left is supposed to flow back to the Kilombero River, traversing the sugarcane plantation, which also extracts water for irrigation of sugarcane. We wondered how much, if any, water was left for the Kilombero Wetlands, and the Kilombero Weavers, after this assault. 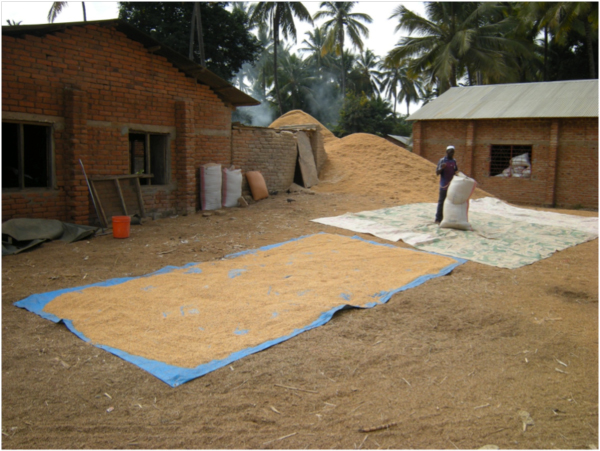 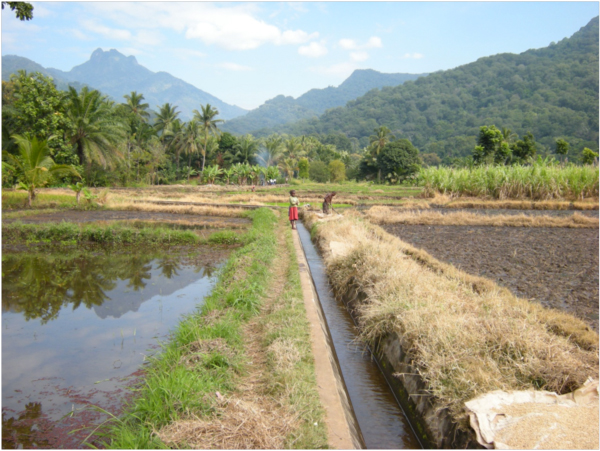 Looking north along the mountain front, the new ricefields were a beautiful emerald green. “Does the village pay for the water?” we asked. Yes, was the answer – they pay an annual fee to the Rufiji Basin Water Office of about 108,000 Tanzania shillings. About $80 a year, that is, for enough water to grow two crops of rice on 100 hectares. Water, in other words, is essentially free here.

But what is the true cost, and value, of this “free” water? The staff of the Udzungwa Mountains National Park are working in all the villages along this mountain front, including Mkula, to try to keep the watershed forests intact. Villagers need firewood to cook. The forests in the park, bordering these villages, are under intense pressure. International donors and conservation organizations, such as the World Wildlife Fund, have tried to work with these communities to develop agreements, plant fuelwood trees, and introduce more efficient cookstoves. This is part of the “cost” and value of this “free” water from the Udzungwa Mountains. “We really need at mechanism for payments for ecosystem services,” said Joram Ponjoli, the Udzungwa National Park Ecologist, at our meeting with him the previous day. We agreed, and we saw an opportunity here. If USAID is proposing to help Mkula Village expand their rice cultivation, this is the perfect opportunity to help establish the principle that water is not “free,” and that rice farmers should pay for the protection of the watershed above them, within the Udzungwa National Park, through a payment for ecosystem services mechanism. The cost of protecting these mountain forests, and thereby maintaining their unique biodiversity and the ecosystem service they create – flows of clean water – should be rolled into the price of rice and passed along to consumers. It is not a “free” externality. Is this some crazy idea invented by tree-hugging conservationists? No, in fact, look no farther than New York City for the model for such a payments for ecosystem services scheme. In the early 1990’s, faced with the choice between spending around $6-8 billion to build a new water treatment plant or around $1.5 billion to pay landowners in the Catskills watershed to protect the forest lands that provided clean water, New York made a simple economic choice: protect forests! This is capitalism at its best – a capitalism that, finally, is informed by the view that the ecosystem services like clean water, created by biologically diverse, fully functioning ecosystems, should not be treated as “free” economic externalities, but should be rolled into the costs of doing business. We left Mkula and drove north through Mikumi and on toward Dar es Salaam on a hot morning, all these thoughts from the previous days swirling in our heads, worried about the problems, hopeful about the opportunities. 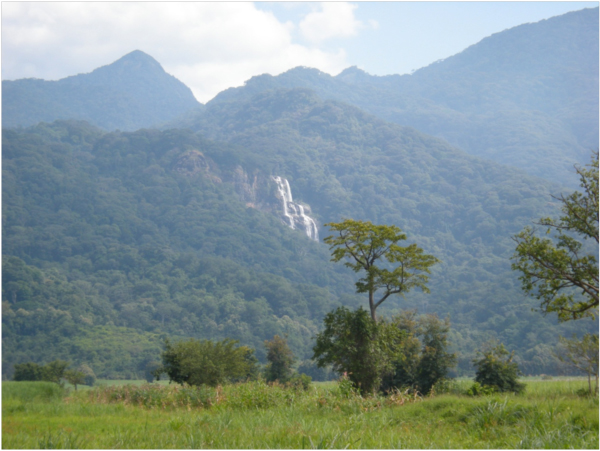