You are here: Home » Blog » Education » Following Up on Following John Muir to the Monkey Puzzle Forests of Chile

April 2016. I’ve written several stories before about two previous trips to Chile with my son Jonathan, during which we reconstructed the route taken by John Muir in 1911 in his little-known quest to see forests of Araucaria araucana, the monkey puzzle tree. Those trips took place in the austral summers of 2012 and 2013, and after the last one we started planning for a small workshop that would bring together some of the key people who could help us take the next steps in gaining recognition and protection for the historically and ecologically important site Muir visited. Finally, on April 4-5 the workshop happened. It was organized with help from our forest science colleagues from the Universidad de Concepción (Dr. Aníbal Pauchard), and the Universidad Austral de Chile (Dr. Mauro González), and held at Suizandina Lodge in Malalcahuello, Chile, with the support of Suizandina’s director (Sergio Pérez). 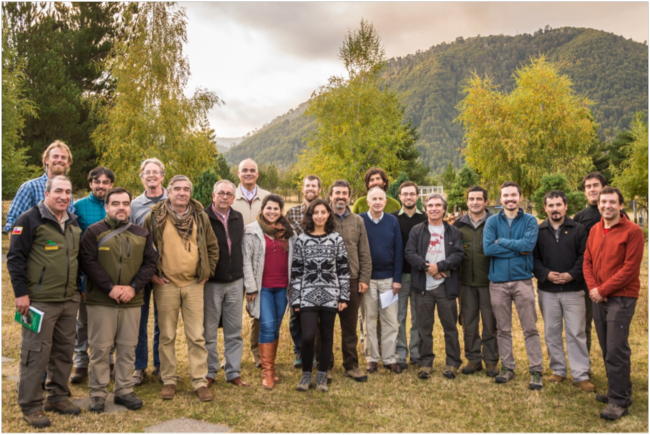 The first day of the workshop was filled with presentations and discussions. A diverse group of 23 people attended, including representatives of CONAF, the Corporación Nacional Forestal, which manages Chile’s protected areas and forestry sector; of AF-Chile, the private commercial forestry company that manages the land on which the Muir site is located; academic ecologists and historians; university students; and leaders of a few Chilean conservation organizations. Jonathan and I kicked off the day with a presentation about Muir’s trip and our reconstruction of his route. That was followed by eight talks, ranging from forest ecology to history and conservation policy in Chile. To give you a “flavor,” titles included: Ecology, Biodiversity, and Threats to Araucaria araucana Forests; Fire and the Ecological History of Araucaria Forests; Historical Perspective on Protected Areas in Chile: A Framework for the Muir Site; Private Protected Areas in Chile; History of the Malleco National Reserve; and Heritage Routes in Chile. Participants also enjoyed a videotaped presentation about the John Muir Papers, the archive of his letters and journals at the University of the Pacific in Stockton, California, which had been prepared as a special contribution to the workshop.

A few points of interest and conclusions from the day: Chile’s unique Araucaria forests face threats from land use change, climate change, and invasive species, and are under-represented in the national system of protected areas. Araucaria forests exist in a dynamic relationship with fire, climate, and human land uses such as grazing. Private protected areas in Chile offer a lot of flexibility in terms of what they are called, and how and for what purposes they are managed. One category of private protected area is an “área de alto valor de conservación” – an area of high value for conservation. International certification bodies such as the Forest Stewardship Council recognize and reward forest owners who protect lands with “high conservation values,” including forest areas with high cultural and historical value. Seventy percent of the land owned by the commercial forestry company, including the Muir site, is native forest, and thirty percent is plantations of non-native species, mainly Eucalyptus. A group of nature and ecotourism operators in Malalcahuello is interested in getting the Muir site opened for limited access so that it can be added to one of the existing national “Rutas Patrimoniales” – “Heritage Routes” – in the Araucanía Region. Then they can start marketing trips to the site to groups of specialized clients, such as Sierra Club members from the U.S. who are interested in John Muir and his legacy. The regional office of the National Tourism Service of Chile, SERNATUR, is very supportive of the idea of making the Muir site part of a national tourism “Heritage Route.”

A site visit to the Muir site was the plan for the second day of the workshop, and the weather couldn’t have been more perfect. After a clear night, the fields around Suizandina were covered in a thick, sparkling frost, but the day promised to be bright and clear. Nineteen people packed into six vehicles for the trip. We stopped several times to explain to the group how Jonathan and I reconstructed Muir’s route, matching his descriptions and sketches to locations we were passing near Laguna Malleco and the entrance to Tolhuaca National Park. A passable 4-wheel-drive road through the forestry company land let us drive to within about a kilometer of the Muir site, and the walk from there was not difficult. We were grateful to AF-Chile, the forestry company that owns the area, for facilitating access to the site. 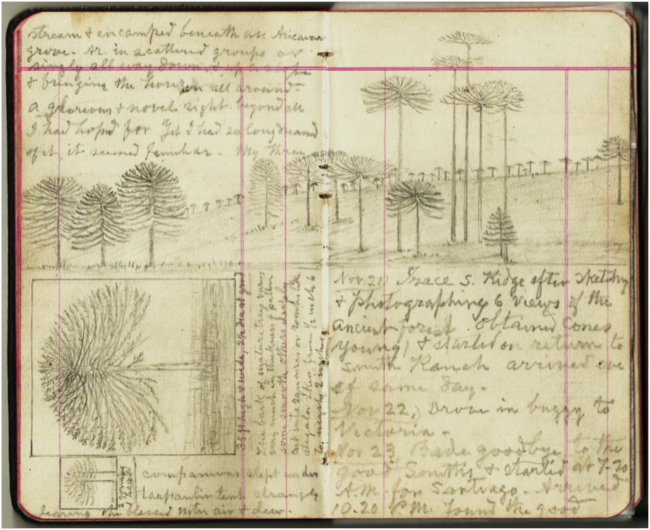 Muir’s journal with sketches from the site, 21 November 1911 (courtesy of John Muir Papers, Holt-Atherton Special Collections, University of the Pacific) 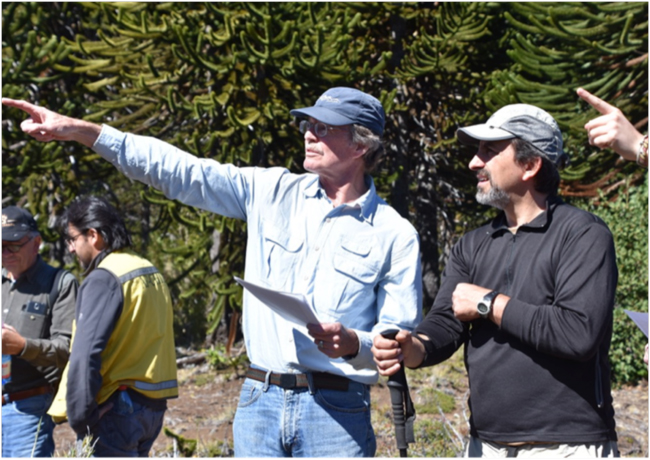 Ecologically, the site presents a striking contrast to sites at similar elevation in the region, such as the Sanctuario El Cañi near Pucón, about 75 miles south. Our forest ecologist colleagues are interested in further studies to understand the fire history and forest dynamics that led to the current forest condition at the site. Some of the fire ecologists in the group discovered old fire scars on several of the biggest Araucaria, including one of the “Big Five” old trees that Muir sketched. Their “reading” of the forest landscape was that the forest Muir saw had only scattered old trees with an open understory because of a stand-replacing fire that must have happened at least several decades before his visit, which must have killed all but the biggest, most fire-resistant Araucaria, and left fire scars on a few of them. Studies have shown that fires in Araucaria forests in this region of Chile were large, intense, and widespread in 1851 and 1897 because of a combination of drought and the mass flowering and die-off of the native bamboo (Chusquea coleu), which created fire-prone fuel loads. After Muir’s visit in 1911 it seems likely that there was little or no fire, because of the diverse stand of younger Araucaria now growing, but grazing must have been very intense since 1911 to suppress the regeneration of Nothofagus species, coigüe and lenga, due to the fact that cattle eat their seedlings. I was excited to be here, finally, with some forest ecologists who could interpret the ecology of the site for me.

But equally delightful, and a highlight of the day for me, was taking Harry Smith, the spry 80-year-old great-grandson of the Canadian immigrant to Chile who hosted and guided Muir in 1911, to the place where his great-grandfather camped with Muir. When we finally met Harry in 2013, he shared his treasure-trove of historic family photos with us. I think Harry too was delighted and moved to be joining us on a visit to this place that linked his family history with that of John Muir.

Harry Smith, great-grandson of Muir’s host in 1911, Filipe Smith, at the Muir site

For me, the workshop was a long time in the making, and it exceeded my expectations. We now have a list of “next steps” to take to gain the recognition and protection we think the site deserves. I thought again of what Muir wrote to his friend Henry Fairfield Osborn in late November, 1911, waiting in Buenos Aires for a ship that would take him to Africa, the second leg of the last major journey of his life: “All I came to seek I’ve found and far, far more.” It seemed to me a fair summary of our long-planned little workshop. 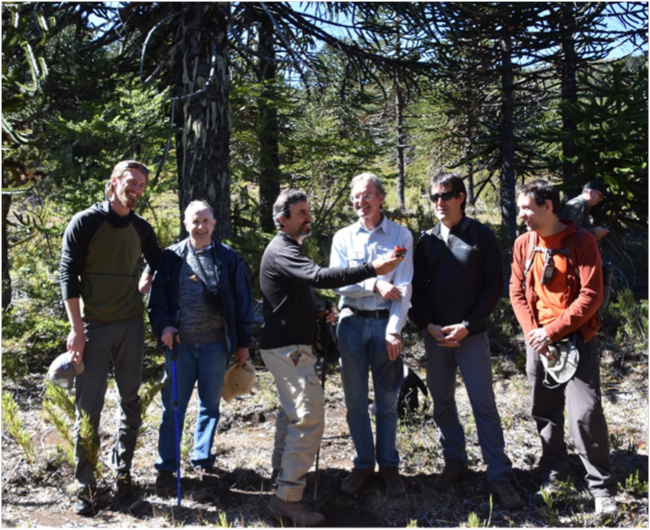