You are here: Home » Blog » Biodiversity » Following Muir’s Route in Sketches and Photos

February 2013. Marcelo Mila, the Mapuche leader of the group now living at the old Smith fundo of Ontario, first took us to see the view to the southeast, over the gentle valley of the Río Quino.  The view matched one of Muir’s sketches, made on the morning of 19 November, 1911.  Muir wrote: “I wandered through broad wheat fields a mile or two from the ranch house and obtained magnificent views of eight great white volcanic cones, ranged along the axis of the mountains. Spent the day sketching them. Sketched all in outline.”

On the left is Sierra Nevada, and on the right is Volcán Llaima, which Muir labelled correctly.

Sierra Nevada and Llaima from the old Smith fundo at Ontario.

We then went to the other side of the gentle ridge, giving a view to the north and west.  From here, except for some big trees blocking parts of the view, we could see the views shown in three of Muir’s connected, panoramic sketches: Volcán Tolhuaca and Lonquimay to the east; the lower broken country of ridges, mesas, and peaks that Muir labelled the “Araucaria region” to the northeast; and Volcán Callaqui to the north.

Muir got the names of both of the peaks in this sketch wrong: on the left is Volcán Tolhuaca, and on the right is Lonquimay.

View of Volcán Tolhuaca and Lonquimay from Ontario

Sketch of the horizon to NE of the Smith ranch at Ontario, connecting to the left of the sketch of Tolhuaca and Lonquimay above in a panorama.

The photo below shows the view from fields a mile or so from Ontario today.  The rugged low peak in the center of the sketch, above which Muir wrote “Araucaria region” is Cerro las Cabras, to the south of Laguna Malleco in Tolhuaca National Park.

Ontario sits on the gentle ridge between the Río Quino to the south, and Río Traguën to the north.  Muir, Philip Smith, and their companions camped at the headwaters of the Río Quino in the Araucaria grove. Following the ridge up from Ontario would lead exactly to the meadow above Laguna Malleco from which Muir sketched the slope of the valley to the NE, and then climbed up the steep ridge to the south that they could see was “fringed with the long sought for Araucaria.”  Muir and his hosts must have ridden for half a day to that point, after an early start from Ontario.  Google Earth puts the distance at about 15 miles, a good long ride, but possible. 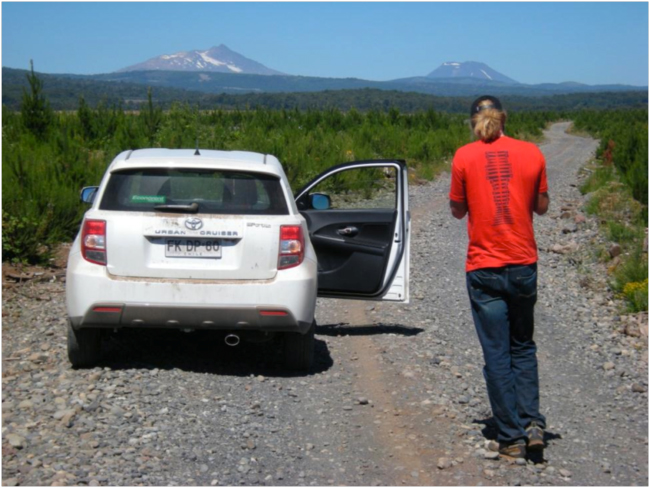 Making our way from Ontario through commercial timber plantations toward Laguna Malleco with the help of Google Maps and I-Phone, roughly on the route the Muir party rode. Volcán Tolhuaca and Lonquimay on horizon to the east. 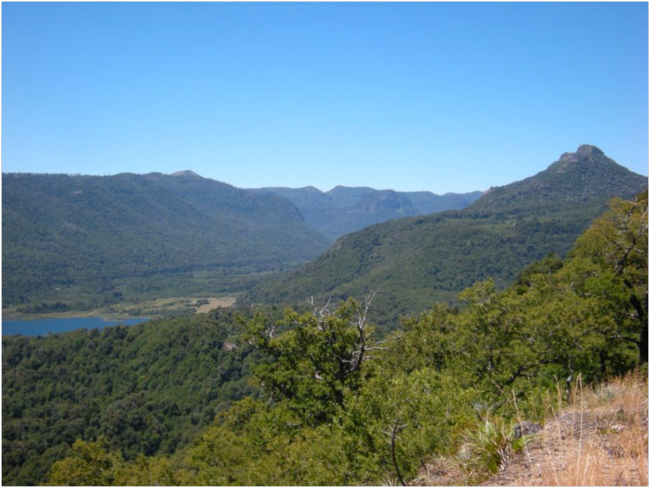 View looking NE from rocky hill called “La Reina” at the S-curve on the road before it drops down to Laguna Malleco and the headquarters of Parque Nacional Tolhuaca.

In the photo above, Cerro Amarillo is the peak 1/4 of the way along the skyline from left; it can be seen above the ridge in Muir’s sketch below. Cerro las Cabras is the peak on the right skyline; it is clearly shown in Muir’s sketch from the Smith “fundo” at Ontario, above.  On that sketch, he wrote “Araucaria region” above Cerro las Cabras and the broken country near it.

Muir’s sketch of the ridge to the NE of what he labels as “Big mdow [meadow] above Lake.”

Muir’s sketch above shows the ridge north and east of Laguna Malleco, on top of which is the flat open area called Prados de Mesacura. It was used for cattle grazing in the 1800s, and probably when Muir visited also, although by then it was officially part of the Reserva Forestal Nacional Malleco. We think Muir made this sketch at midday, after riding from Smith’s ranch at Ontario for five or six hours, starting at six in the morning. The “big meadow” he must have sketched from is now filled in with head-high ñirre, Nothofagus antarctica.  He may not have seen the lake from where he sketched, and only realized they were “above the Lake” when they saw it as they climbed up the ridge to the south. 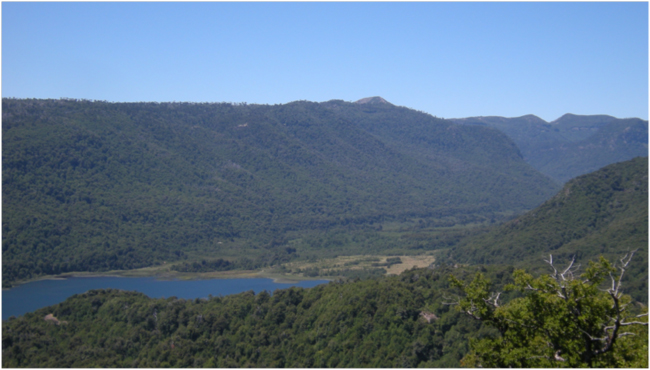 View of the Mesacura Ridge looking NE from La Reina, showing the features Muir sketched, including the peak called Cerro Amarillo, 2/3 of the way from the left on the skyline.

On the same page of his journal as the sketch of the Mesacura Ridge above, the text wrapping around the sketch, Muir wrote “Came in full sight of a ridge 1000 ft hi bordering the S. side of a glacier meadow top of which was fringed with the long sought for Araucaria.” 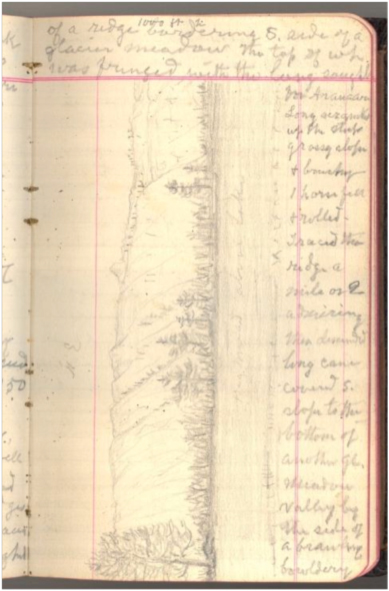 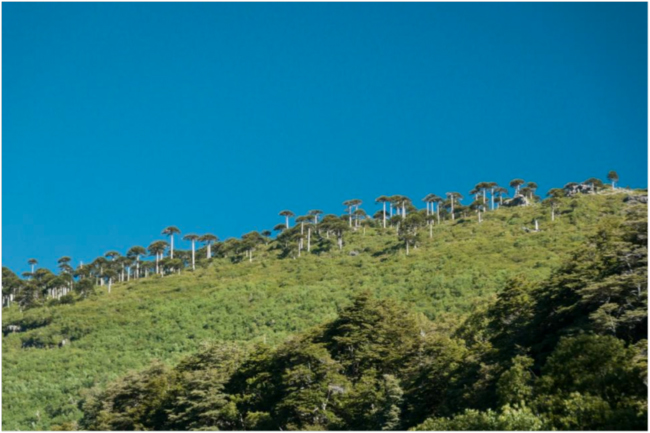 View of “Muir’s Ridge” looking south from the valley near Laguna Malleco showing “fringe” of Araucaria mentioned in journal (Photo by J. Byers)

The journal entry continues: “Long scramble up the steep grassy slope and brushy. 1 horse fell and rolled. Traced the ridge a mile or two admiring… 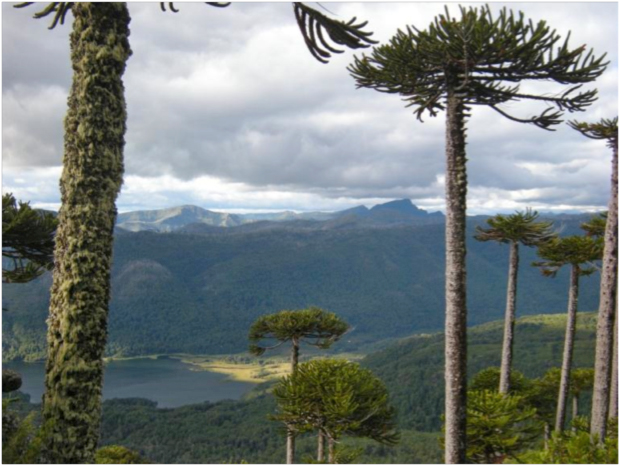 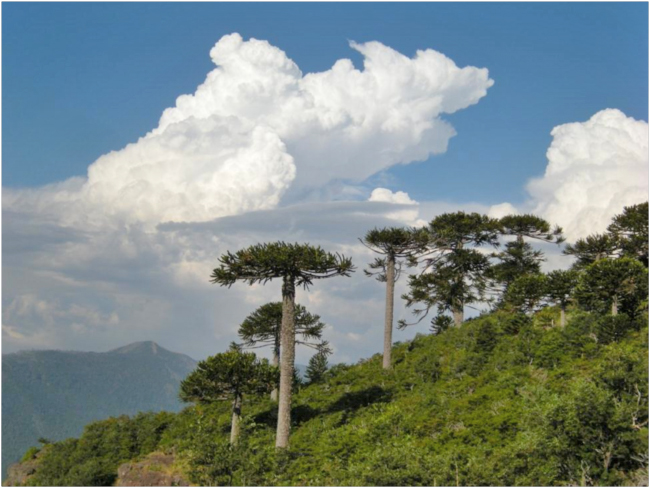 Views from Muir’s Ridge: top, looking north and down on Laguna Malleco; above, looking east to Cerro Amarillo. 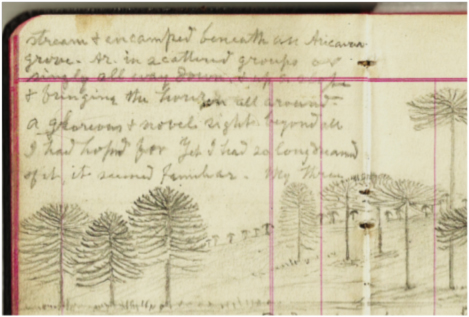 “then descended long cane-covered S. slope to the bottom of another glacier meadow valley by the side of a brawling bouldery stream & encamped beneath an Araucaria grove. Ar. in scattered groups and fringing the horizon all around. A glorious and novel sight, beyond all I had hoped for. Yet I had so long dreamed of it, it seemed familiar.” 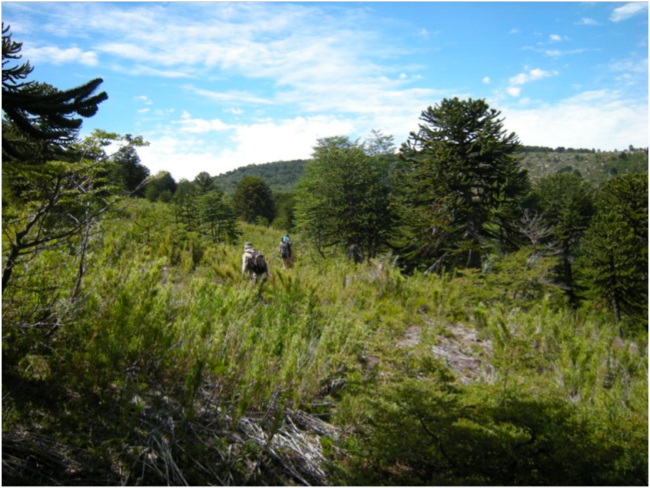 Isaías Cófre and Jonathan Byers descending the “long cane-covered S. slope” to the Muir campsite by the headwaters of the Río Quino. 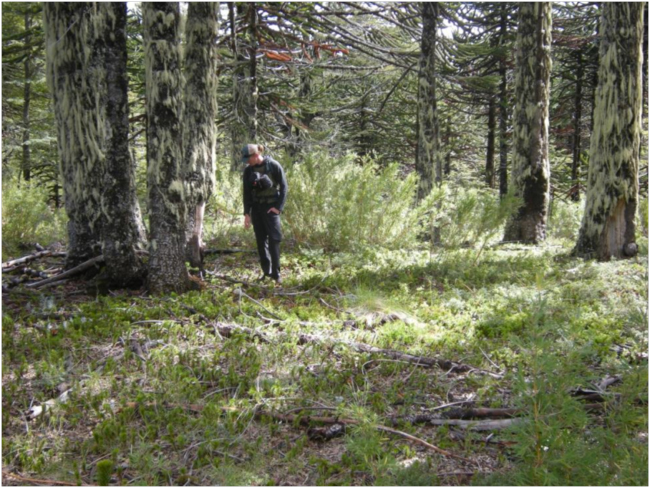 A circular grove of old Araucaria about 10 meters from the stream, probable site of the Muir party’s camp on the night of 20 November, 2011. The ground was covered with a thick carpet of baby Araucaria seedlings.