The morning was sunny, but the humid clouds hanging on the higher hills around Nakuru suggested that rain was coming later.  We passed through farm country around Njoro, turned onto a smaller road through Edgerton and headed up into the lush rolling hills.  Our destination was the headwaters of the Mara River.

The Mau Escarpment, a range of hills and low mountains on the western side of the Great Rift Valley rises up to above 3,000 meters in a few places, and is the catchment and watershed for rivers draining southwest toward Lake Victoria, and south toward the basin of saline Lake Natron.  Short rivers flow east, maintaining the closed-basin lakes in the bottom of the Rift Valley: saline Lake Nakuru, famous for its flamingoes, and freshwater Lake Naivasha.

Kenya is largely an arid and semi-arid country.  Only 20% of its land receives enough rain for rainfed agriculture, and these forests were the natural vegetation of that 20%.  Ninety percent of the original forests have been converted to cropland.  The Mau Forest, remnants of which still cover these highlands, is the largest remaining area of montane forest in Kenya.  It is one of five areas that are often called the “five water towers,” the others being Mt. Kenya, Mt. Elgon, the Aberdares, and the Cherengani Hills.

The Mau Forest is fiercely contested land.  Former politicians have carved out timber plantations to enrich themselves and their families, taken huge areas out of forest reserves and given them to politic al cronies for farms, resettled members of their own tribes to gain political leverage, thrown out members of other tribes, and displaced the small community of original forest-dwelling inhabitants of the area, the Ogiak.  In the aftermath of the violence following the 2007 presidential election, a “Mau Task Force” was set up to try to tackle some of these issues, and that evolved into the Interim Coordinating Secretariat for the Mau.  Solutions are complex and won’t come quickly, so there is a debate about whether the ICS should be transformed further into a more permanent management authority for the Mau. 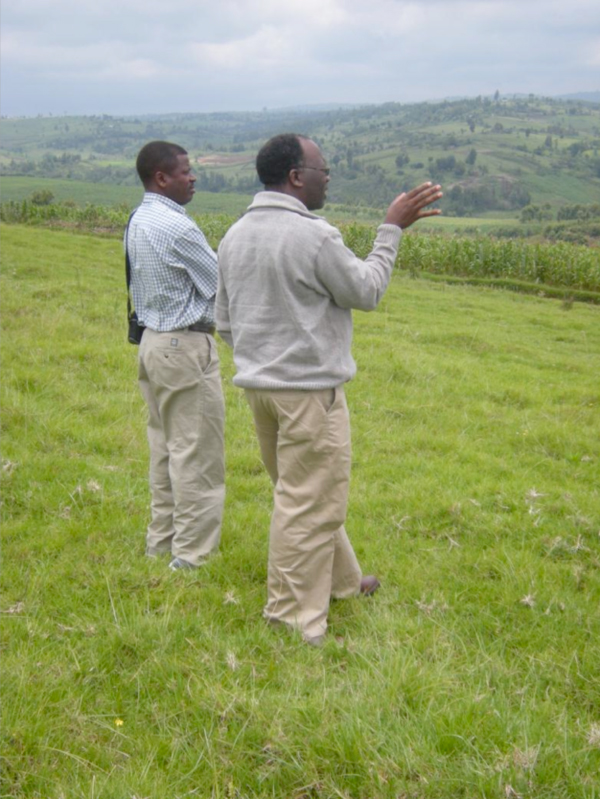 We were visiting the forest with Fabian Musila, a natural resource enterprise specialist with the USAID-funded ProMara Project, which is working between communities and the national government to try to unlock some solutions for the forest and its people.  At first the road passed through large farms – maize and  potatoes seemed to be the main crops.  There was very little forest left.  Some of these areas were the ones “excised” from the original Mau Forest Reserve as political payoffs.  The red soils were deep and uniform, and the road an obstacle course of ruts and mudholes after so much rain. 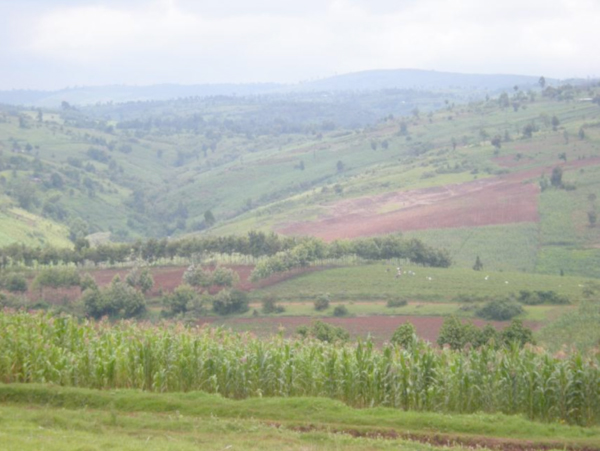 Farms in the lower Mau 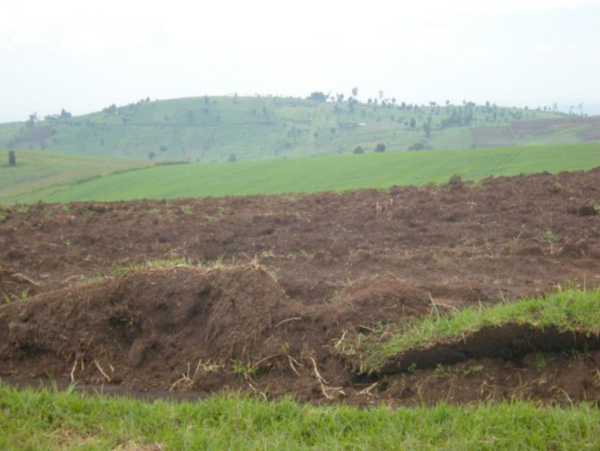 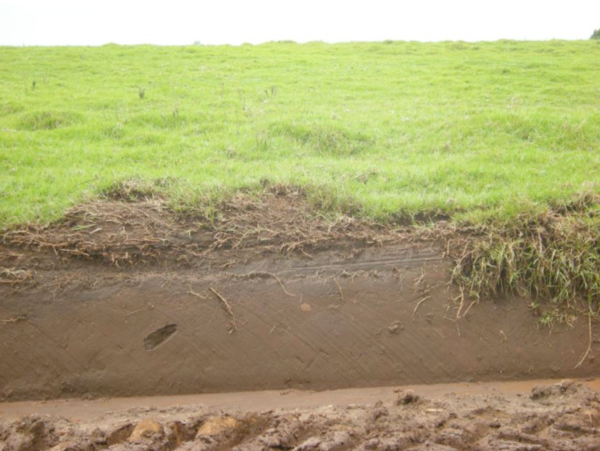 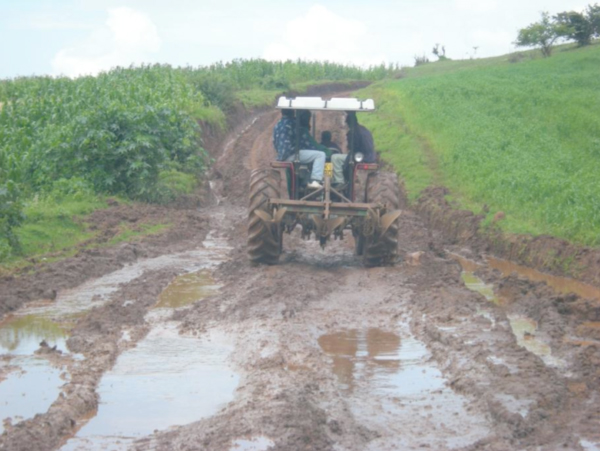 We passed plantations of cypress, eucalyptus, and pine, leased to Timsales – a business owned by the Kenyatta family.  As in Jomo Kenyatta, the first president of independent Kenya.  Firewood cutters with huge loads of neatly stacked wood on the backs of bicycles careened down the muddy road.  Finally, on the top of a ridge, we saw the first significant patches of native forest, with a few shambas taking bites out of the forest edge.  We began to see the big Hagenia abyssinica that are one of the characteristic trees of these high elevation forests.  Finally we reached a large marsh, headwaters of one of the two main upper branches of the Mara River. 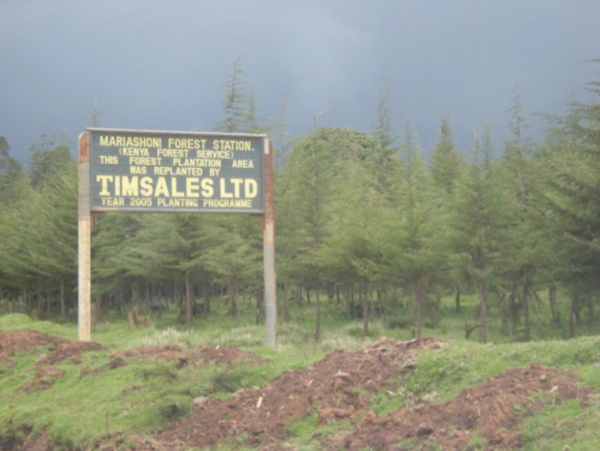 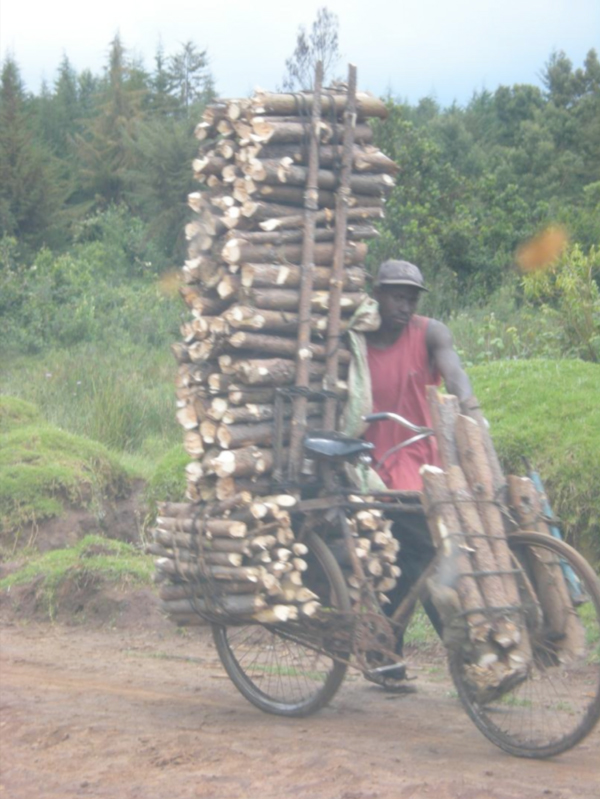 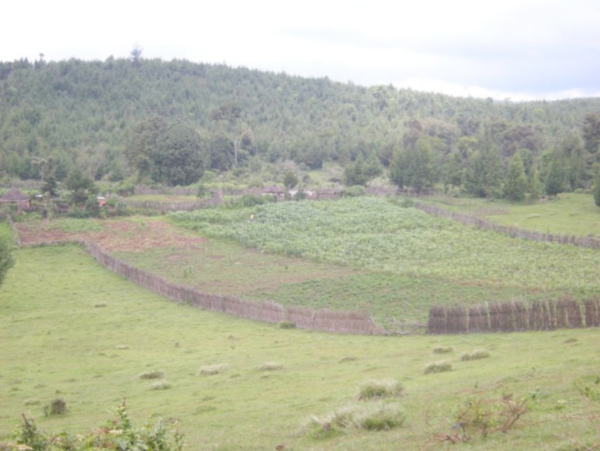 Shamba at the edge of indigenous forest

The Mara flows southwest, through the Masai Mara National Reserve, and crosses into the Serengeti in Tanzania, finally flowing into Lake Victoria.  In some ways, this transnational river is the key to the spectacular annual migration of wildebeest, zebra, and antelopes that makes that part of the world so famous among safari-ing tourists.  The dramatic footage of wildebeest leaping off of high banks to swim the river, some grabbed by waiting crocodiles, that are a staple of African wildlife films – those scenes are all shot along the Mara. 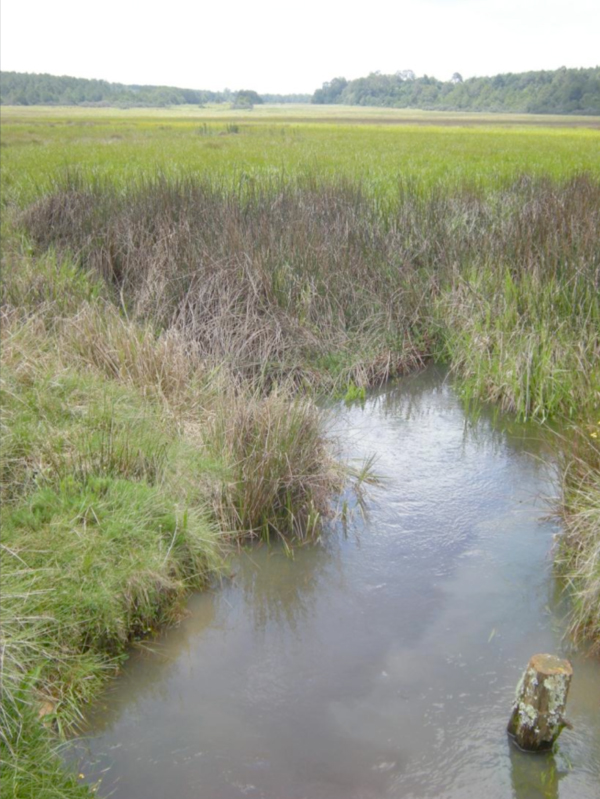 Headwaters of the Mara River 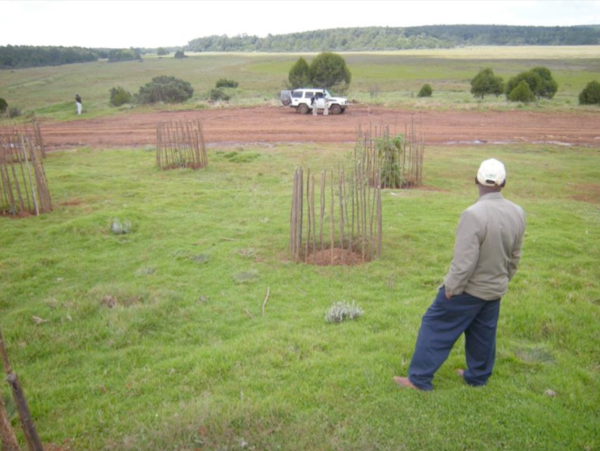 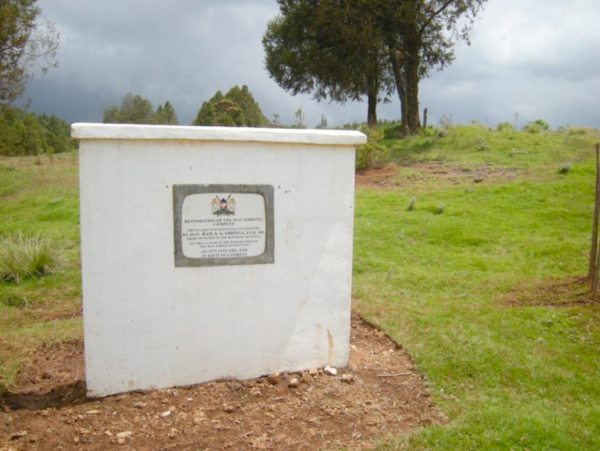 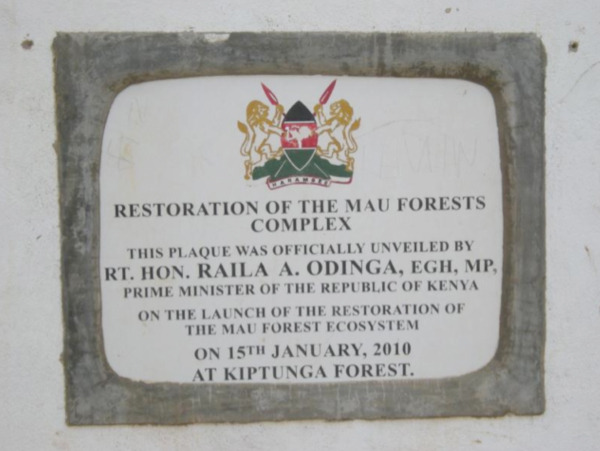 Just above the marsh, a large area had been replanted with native trees, and the restoration project dedicated in January, 2010, by the Prime Minister, Raila Odinga, himself.  As we drove down from the headwaters, we stopped to wait while a log truck was loaded.  Passing through tall native forest a bit farther on, a flash of black and white crossing the road caught our eye.  When we stopped, the forest on both sides of the road was a scramble of black-and-white colobus monkeys, a large troop of at least a couple dozen individuals. 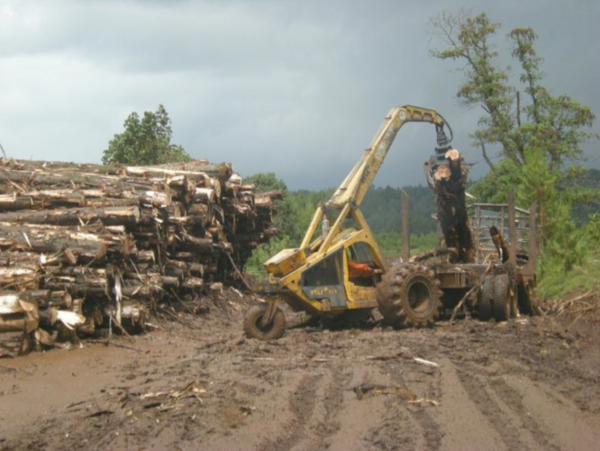 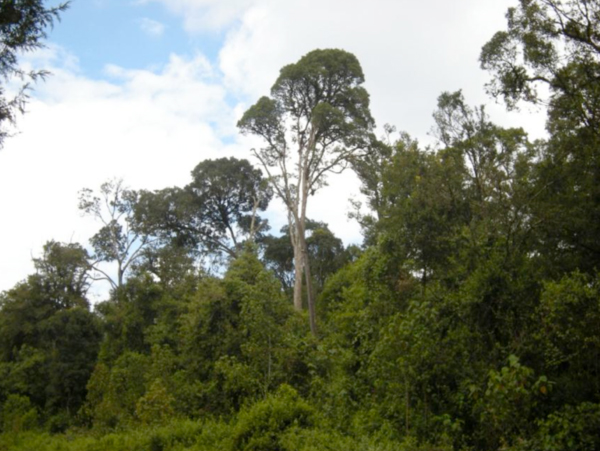 Tall trees of the native forest 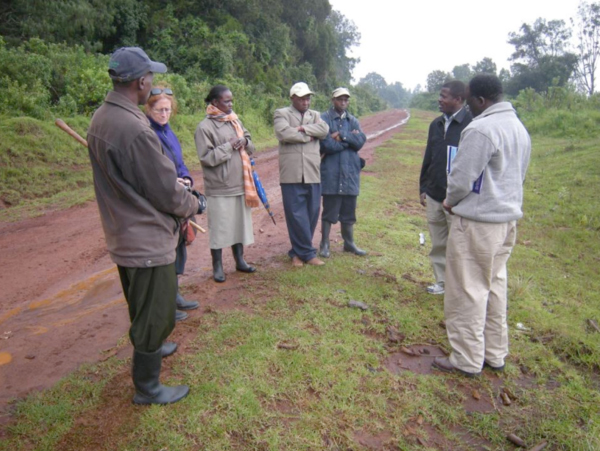 We finally reached a large clearing. Waiting for us in the cold drizzle were half a dozen members of the Kiptunga Community Forest Association, a group of local community members formed to work with the Kenya Forest Service in resolving forest resource use conflicts.  They had obviously been here awhile, and looked a bit chilled.  After talking for half an hour about what they do, we walked with them through another replanting area.  Then we headed down, out of the forests, back to the farm country, and eventually back to our hotel in Nakuru, overrun with hundreds of Chinese tourists here to visit nearby to Lake Nakuru National Park.  I wrote up my notes over a cold Tusker, wondering where on the scale of hope to despair the day should fall.