In late September I made an Indian summer pilgrimage to the “Range of Light,” as John Muir called the Sierra Nevada. In My First Summer in the Sierra, published in 1911, Muir wrote: “When we try to pick out anything by itself, we find it hitched to everything else in the Universe.” I have always depended on that quotation as one of the best expressions of a systems view of the world. Muir is, of course, one of the founding fathers of our American concept of nature and of nature conservation. What I didn’t know until I read the environmental historian Donald Worster’s insightful biography of Muir, A Passion for Nature, was how “hitched” his views were to the deeper currents running in American society in the late nineteenth and early twentieth centuries. Worster writes that Muir was a spokesperson for “… liberal ideas in ethics and religion that were challenging the orthodox notions of salvation for the few, of innate human corruption, of a fallen world. Early on he began to strive for a more positive, hopeful view of human nature, along with a more positive view of nature. The revolutionary movement that challenged those older, more 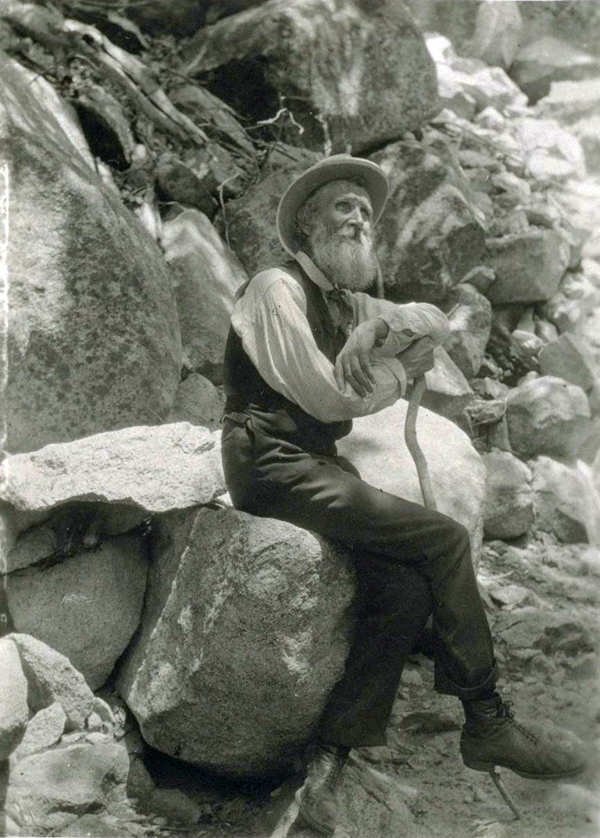 pessimistic attitudes toward nature and human nature emphasized the fused ideals of liberty and equality.” Far more “liberal” than most of his contemporaries, however, Muir argued not only for the liberty and equality of all social classes and races, and for the emancipation of women, but extended those principles to all non-human species, and all of nature. 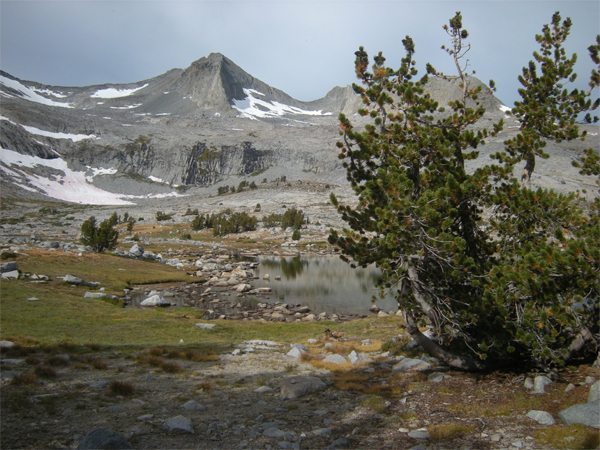 Worster writes that Muir was “a liberal also in his religious views.” He imagined “… an active, creative force dwelling in, above, and around nature. Continuously animated by that divine force, every part of the natural world was in constant flux – the earth moving under foot, glaciers flowing down mountainsides, plants and animals evolving and spreading. Always the flux was purposeful. Always it moved toward beauty. Always and everywhere it was holy.”

Part of my motivation for wanting to reacquaint myself with, and learn more about, John Muir stemmed from feeling a bit of guilt. In March and April I travelled to Ukraine, to conduct an assessment of biodiversity conservation needs in that country for the U.S. Agency for International Development. I was fascinated to learn about the national system of protected areas in Ukraine, many of which were established during the Soviet era. The system of “zapovedniks,” or nature preserves, that were established during that era are protected areas set aside for scientific research and some educational visits only. Zapovedniks are closed to local people and recreational users. Nature and biodiversity, it seemed to me, was seen under that system as the property of science. The trouble is, I reasoned, if normal, local people can’t even enter those nature preserves, and experience the beauty and freedom of those places, why would they care about maintaining those natural places in the long run? This idea seemed to fit with what we found in Ukraine – lack of a broad public constituency for conservation. How different from our experience in the U.S., I thought – in some large part thanks to John Muir, who argued that we should set up national parks precisely to give everyone equal and liberal access to the aesthetic and spiritual values of wild nature.

So, based on that reasoning from my own culture-bound experience, I wrote in our report on the assessment: “One of the main challenges faced in Ukraine is that the traditional perspective on biodiversity conservation (perhaps dating from the Soviet era) is one of “nature protection.” That is, biodiversity is seen as something to be “protected” from humans, in certain restricted places, rather than “conserved” in multiple-use landscapes, where it can be used and managed in a sustainable manner for various human benefits (products, services, and non-material values). There has been, apparently, no equivalent in Ukraine of John Muir, one of the founders of nature conservation in the U.S., who extolled the aesthetic, spiritual, and recreational virtues of wild nature. Nor do there seem to be, in Ukraine, NGOs that are equivalent to the Sierra Club (founded by Muir) or The Wilderness Society in the U.S., which can take that theme to civil society and create a broad constituency for conservation.” One of my Ukrainian colleagues on the assessment team, Alena Tarasova, seemed offended by that interpretation and commented: “I do not agree. We have very rich history of conservation. But it was mostly about creating protected areas.”

Alena’s comment was the source of my feeling of guilt, and I wondered if I really understand Muir well enough to be saying what I had said. I am glad that guilty feeling led me to read Worster’s excellent biography, and, in part, provided the motivation to want to walk again in the mountains that inspired Muir. I respect and accept that the zapovednik system of protected areas in Ukraine and throughout the former Soviet Union was sophisticated, and well-intentioned in its own cultural and historical context. Maybe now is the time to reconcile and fuse these ideas about nature conservation, and even involve even other models and examples from across the globe.

So much for philosophical ramblings! Ah, but the Range of Light can speak for itself when it comes to moving “… always toward beauty.” 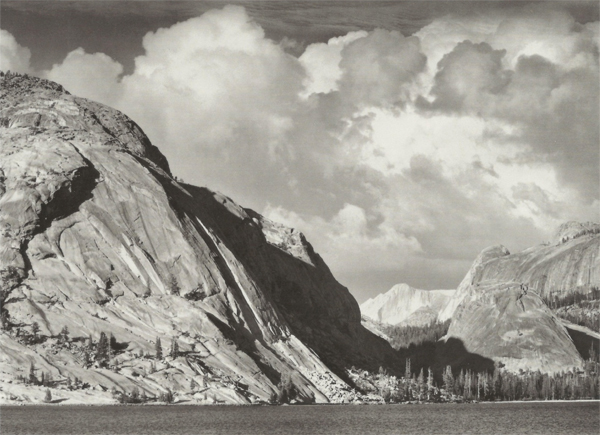 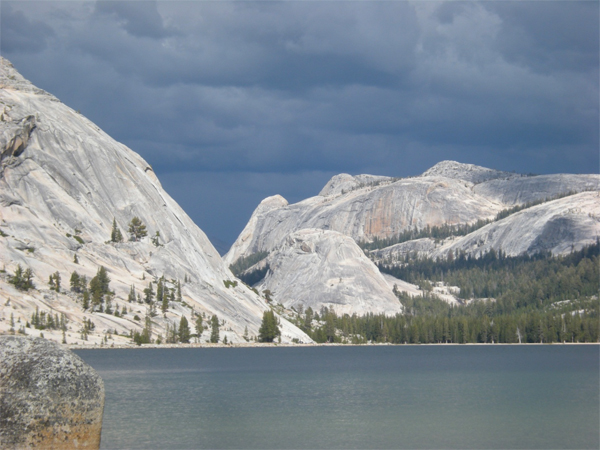 In terms of Muir’s “glaciers flowing down mountainsides,” my trip to Yosemite involved backpacking into the upper watershed of the Toulumne River with a glacier-monitoring team to have a look at the Lyell and McClure Glaciers at the time of year of minimal snowpack, when any long-term changes in the glaciers should be most obvious. After two days of hiking and climbing off-trail, we camped on a sharp ridge between the glaciers at about 11,700 feet in elevation, more than a thousand feet above the treeline here. This was the site of a weather station established a couple of years ago for this glacier-monitoring project.

Part of the “program” was to find the exact locations from which photographs of these glaciers were taken in the past. At our campsite on this ridge we were within a hundred meters of the place from which G.K. Gilbert, a founder of the science of geomorphology in the U.S., took a photo of the Lyell Glacier in 1908. Repeating historic photos of glaciers and snowfields is one method of documenting, and eventually better understanding, the effects of our human activities on the global climate. 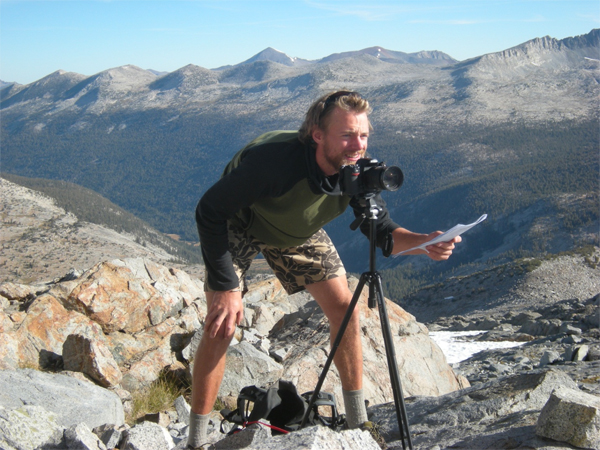 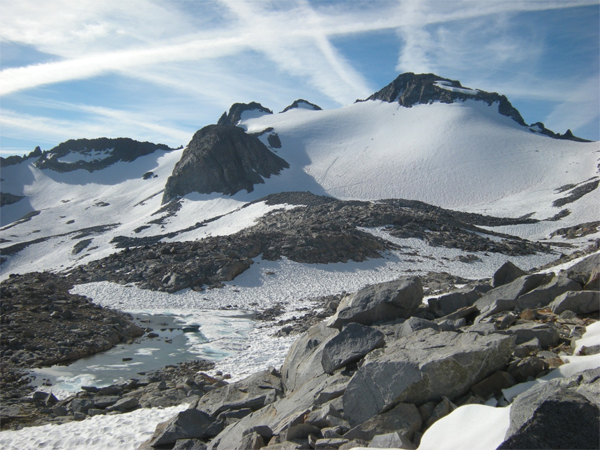 Glaciers sculpted the Yosemite landscapes in which Muir delighted. Walking in these landscapes now, once covered by thousands of feet of ice in places, we can imagine, and also delight in, the dramatic changes that this place has experienced. But much more than that, understanding the changes that our addiction to fossil fuels may be having on these mountain glaciers is of serious practical importance. And that story is “hitched” to a philosophical and political fight that John Muir eventually lost, and which broke his heart: the story of Hetch Hetchy. The Hetch Hetchy Valley of the Toulumne River, the next major drainage north of the Yosemite Valley of the Merced River, was for Muir the physical and spiritual twin of Yosemite. It is also within Yosemite National Park. The city of San Francisco proposed a giant dam at Hetch Hetchy in 1903, and after a decade-long battle against the dam, led by Muir, it was approved under the administration of Woodrow Wilson in 1913 and was completed in 1923. It is owned by the City and County of San Francisco, supplies drinking water to approximately 2.4 million people in the San Francisco Bay area, and also produces hydroelectric power. What was lost under the reservoir of the dam was another of Muir’s cathedrals of nature.

The glaciers we were surveying lie at the head of the major tributary of the Tuolumne River feeding Hetch Hetchy, the Lyell Fork. The drinking water of San Francisco and much of Silicon Valley, is “hitched” – in Muir’s term – to the state and fate of these glaciers. That’s why it’s important to monitor their health, and why we were camping on the rocks at 11,700 feet. 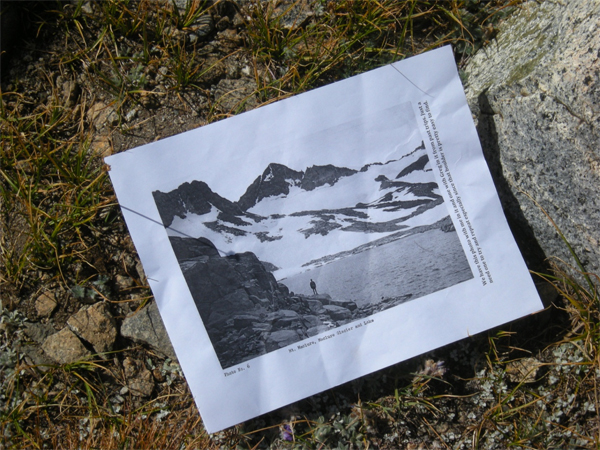 Historic photo of Mt. McClure and McClure Glacier from the lower tarn 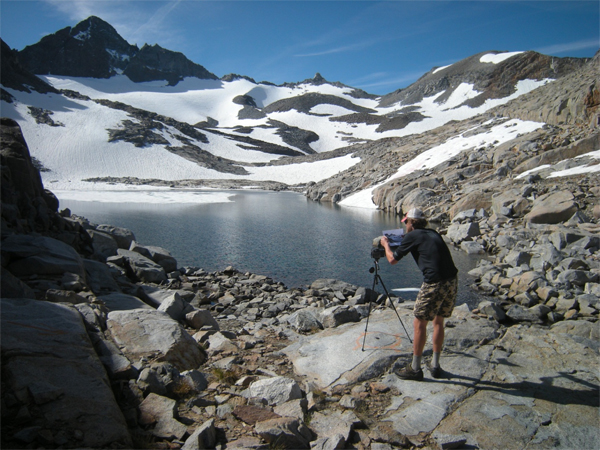 Repeating the historic photo of Mt. McClure and McClure Glacier from the lower tarn

I learned from Greg Stock, the Yosemite National Park geologist and a member of the glacier-monitoring team, that the San Francisco Public Utilities Commission recognizes the “ecosystem service” being provided by the Toulumne watershed in the park, and in fact is financially supporting a significant amount of monitoring, management, and public education in the park. This is a good example of a financial mechanism that supports the provision of an ecosystem service – in this case the flows of clean water that come from natural mountain ecosystems. Even if this case does not fit exactly the definition of a “payment for ecosystem services,” it is an arrangement to financially compensate the managers of the ecosystems that provide the watershed “service” for at least a tiny portion of their costs of maintaining and managing those ecosystems. 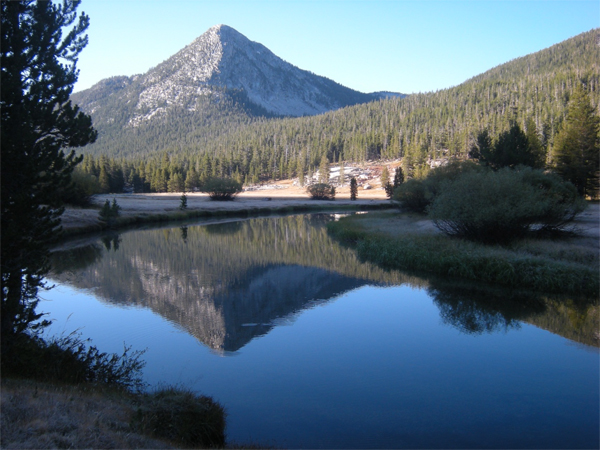 Morning reflection from campsite on Lyell Fork of the Toulumne River