You are here: Home » Blog » Biodiversity » Turtle Beaches on the Gulf of Fonseca

Turtle Beaches on the Gulf of Fonseca

September 2013. The Olive Ridley, Lepidochelys olivacea, the smallest of the sea turtles, comes ashore to lay eggs on the Pacific beaches of the Honduran Golfo de Fonseca. September is the peak nesting month. We wanted to see them if we could, or at least to learn something about the efforts by local fishing communities to conserve the turtles by transplanting eggs to protected nurseries, where they are safe from human turtle-egg collectors and a host of natural predators – lizards, raccoons, and birds.  These communities are trying to develop turtle tourism here, and we wanted to support their efforts and learn how it was going. 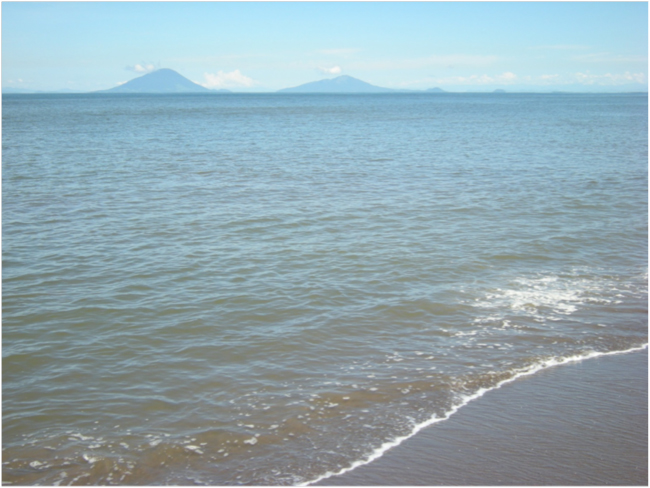 Beach near Cedeño, with Isla El Tigre on the left horizon

The tortuga golfina, as it is called in Spanish, is is a flagship species of this convoluted coast, where Sir Francis Drake sheltered near Isla El Tigre in 1578, waiting to pounce on the Spanish galleons carrying silver and gold from Peru to Mexico. Turtle eggs are a popular local delicacy, often eaten as snacks by men while drinking.  Popular lore considers them an aphrodisiac, and for that reason they can command a high price – up to 20 lempiras an egg, or about one US dollar, we were told.  We asked our driver if he had ever tried them. “¡Por supuesto!” was the answer. “Of course!” We asked his opinion of their reputed properties. “¡Levanta los muertos!” he said. They can “raise the dead!”

The Olive Ridley is found worldwide in tropical oceans, with major nesting populations in the eastern tropical Pacific, including here in Honduras. Nesting occurs in nearly 60 countries worldwide. The species is not on the verge of extinction globally, and is listed on the IUCN Red List of threatened species as “vulnerable.”  There have been large declines in the numbers of these turtles arriving to nest in many parts of the world, however, including here.  The species is listed on Appendix I of the CITES, the Convention on International Trade in Endangered Species, forbidding international trade in any products such as skins, eggs, meat, or shells. The national Secretariat for Natural Resources and the Environment of Honduras, in charge of protecting biological diversity, has placed a moratorium on all turtle egg collecting for the entire month of September, the peak nesting month.

We arranged a visit to one of the community-based turtle nesting camps through Victor, a local ecotourism entrepreneur.  Victor had led us on a wonderful birdwatching trip to Cerro Guanacaure on an earlier trip to Honduras.  He picked us up at the rambling Hotel Gualiqueme in Choluteca early on a Sunday morning, and we drove through the municipality of Marcovia, past giant fields of sugarcane, to the coast at Isla El Venado.  Just past the town of Monjarás, the front tire on the passenger side suddenly blew out on the rough road.  We changed it in record time, stared at by local kids living nearby and attacked by hungry mosquitoes, which we assumed were carrying dengue fever, a dangerous tropical virus that is endemic here in Honduras.

El Venado is a barrier island, backed by mangroves, at the southern end of the 20 kilometers  of beaches that stretch from Punta Raton to Punta Condega.  The island and its fishing community are in the multiple-use protected area of Punta Condega-Las Iguanas, and maintain one of the community-based turtle protection camps. A few days later we also visited another fishing community, at Isla El Eden, which manages a similar turtle conservation center.

We were served a hearty breakfast at the turtle center, where a class of biology students from the university in Tegucigalpa was struggling awake after a night of patrolling the beaches and looking for nesting turtles.  After breakfast, Don Enrique, the director of the center – Victor referred to him familiarly as “Don Kique” – took us across to the island and turtle nursery in a skiff.  One turtle had come ashore last night on the six or eight kilometers of beach patrolled by this community group.  We didn’t see any turtles, but Enrique explained the process of patrolling, tagging nesting females, and transplanting their eggs to the nursery for protection.  He demonstrated how he digs a “nest” for transplanting the eggs with his hand.  It should be about an arm’s length deep – 25 centimeters – and enlarged at the bottom like a vase.  He is the one who gently places the eggs in their new nests, he said.  He has a lot of practice and it takes a gentle touch. 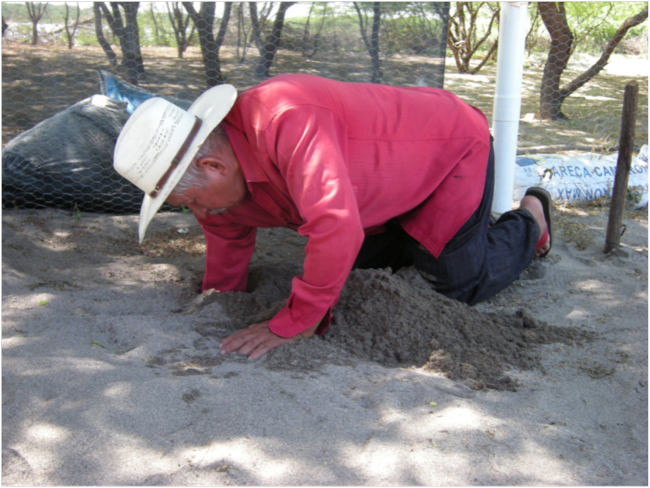 The nursery nests are partially shaded by greenhouse fabric, which also breaks the force of heavy rains and keeps the nests from washing out.  Temperature is carefully monitored, and if it gets too high the sand over the nests is sprinkled with water to cool them.  If all goes well, they hatch in about six weeks and the baby turtles emerge, each nest into a small corral of wire fencing that will protect them until they are carried to the surf and released to face the uncertainties of life in the big ocean. 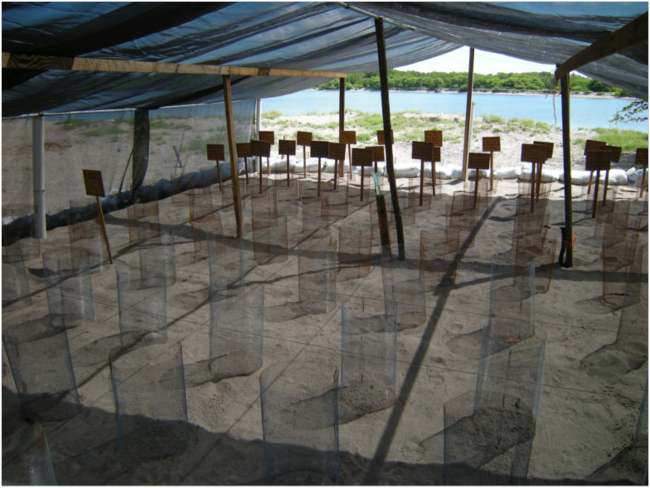 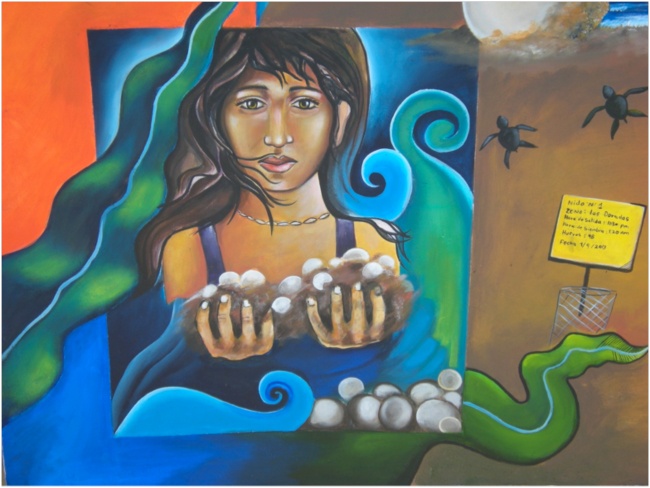 Detail, mural at the turtle nursery at Isla El Eden 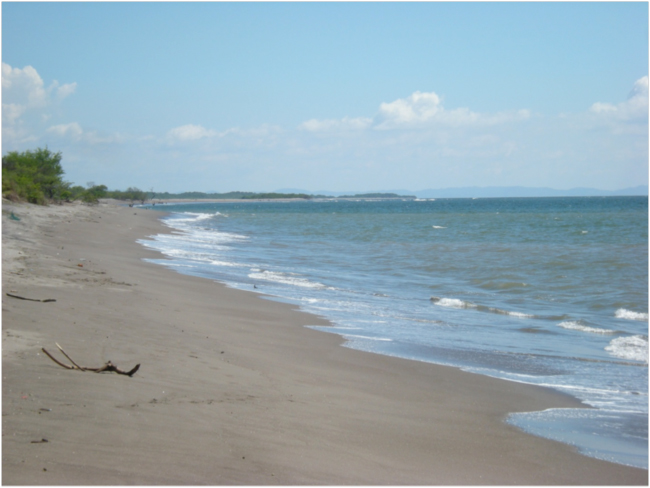 After visiting the turtle nursery and walking on the surfswept beach we toured the mangrove channels behind Isla El Venado in the skiff, finally reaching a point where we could look across the mouth of the Choluteca River.  It was midday by then, and hot under the intense tropical sun.  Time for lunch back at the center, a huge plate of fried fish and plantains.  The big porch, set up on pilings at second-story level, was hung with hammocks, and the final item of business was an afternoon siesta in the shade, cooled by the passing breezes.  I may have dreamt of turtles, but if I did, I don’t remember. 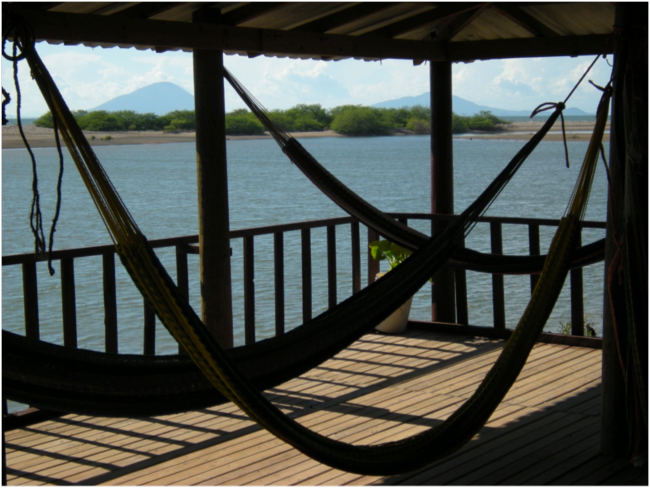 Hammocks at the turtle camp at Isla El Venado