You are here: Home » Blog » Biodiversity » Mangroves in Mozambique: Green Infrastructure for Coastal Protection in an Era of Climate Change

Mangroves in Mozambique: Green Infrastructure for Coastal Protection in an Era of Climate Change

20 September 2012.  After wading across the low tide mudflats at the Port of Angoche, and into knee-deep water to climb into the fiberglass boat, the big Yamaha outboard wouldn’t start.  While we bobbed lazily in the hot sun and I fretted about how nothing in Africa ever goes as planned, the boat skipper removed the rusty sparkplugs and cleaned them in the bailing bucket with a little boat gas and an old toothbrush. Ten minutes later we were bouncing through the swell, heading seaward toward the mouth of the Angoche estuary, flying past the flocks of canoes and dhows sailing these waters. Nothing ever goes as planned, but everything works out in the end.

Cremildo Armando, the marine coordinator of the CARE-WWF Primeiras and Segundas Program, was our guide this afternoon, and we were going to Ilha dos Búzios, an island where Cyclone Jokwe, in March 2008, had destroyed a hundred houses in a small coastal village. We didn’t go ashore, but passed slowly up and down the mangroveless beach in front of the former village. This was Lesson #1 of the importance of maintaining the fringe of mangroves that surround and protect all of the shoreline here around Angoche, and the whole coast of Mozambique: “Ten-Thousand Mangroves Could Save A Village!” 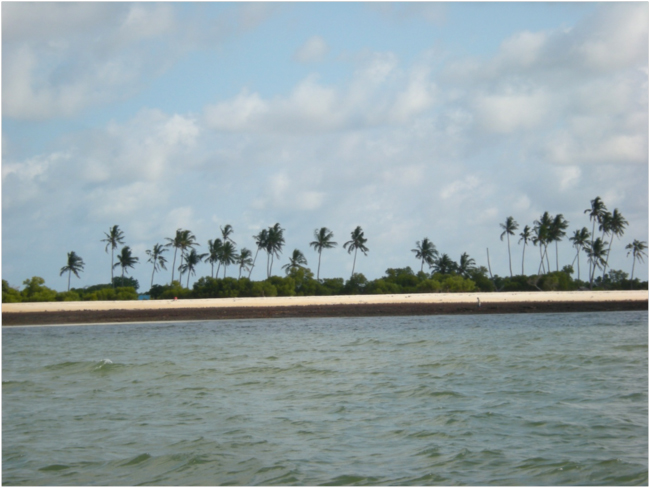 Nine species of mangroves grow on Mozambique’s 2,500 kilometer-long coast, which reaches from Tanzania to South Africa.  Mangroves grow on coastal mudflats and sandy shores on all of Earth’s tropical coasts, in intertidal swamp forests that link land and marine ecosystems. These unique salt-tolerant forests provide a range of ecological functions, from trapping sediment and building coastlines seaward to serving as nurseries for the young of a host of marine species.

After seeing dos Búzios, our skipper turned back up the estuary. We threaded between gently sailing dhows with black sails and men in tiny canoes fishing with handlines, and cruised along the shoreline of a sandy finger of land that points away from the old Portuguese center of the town of Angoche toward Potone Forest and inland. The high-density, low-income Angoche “suburb” of Inguri occupies this sandy peninsula, and by some estimates almost 30,000 people live here, no higher than a few meters above sea level. From the water we could see the bustle of boats landing passengers and cargo at various beaches along the shore. We could see some mangroves – but also areas where the mangroves were thin and degraded.

Then we turned south, passed through a channel between islands, and went deeper into the vast web of estuaries that back the northern islands of the Ilhas Primeiras e Segundas. After cruising along many kilometers of shoreline with nearly intact mangroves, we turned into a narrow, river-like channel, and for twenty minutes twisted our way through a watery pass only five or ten meters wide, enjoying the close-up view of the fine, healthy mangroves on both sides.

Cruising through mangrove-lined channel opposite Angoche

When we popped out of that mangrove channel, we were directly opposite Inguri, and turned right, heading back to Angoche.  Along the near shore we passed several small dhows, loading up mangrove poles to sell as building materials.  Mangroves are being harvested here in what, as far as we could learn, was a completely unregulated and unmanaged way.  What’s the tradeoff between these free construction materials and cyclone protection, or productive local fisheries? 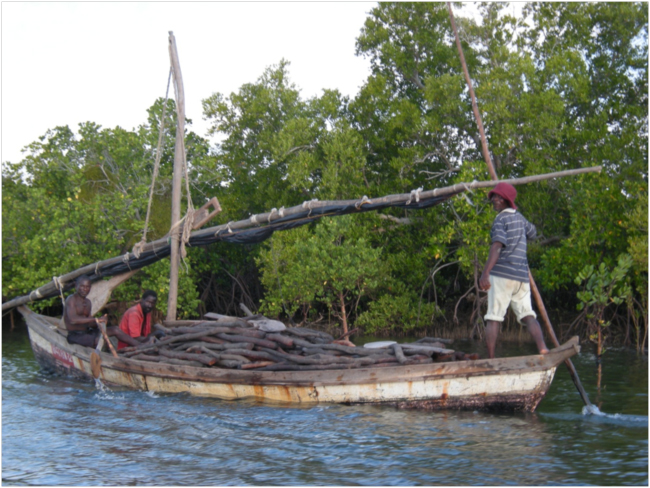 Dhow with load of mangrove poles opposite Angoche

Around the world, as countries try to come to grips with the threat posed by the rising sea levels and the increase in intensity of cyclones, floods, and other extreme weather events predicted by models of global climate change, there is much discussion of improving coastal infrastructure as an adaptation measure. Mangroves are a soft, living infrastructure – not concrete seawalls and floodgates, but “green infrastructure” created by these amazing, biologically-diverse ecosystems. A recent study in the Red River Delta of Vietnam showed that mangroves reduced waves to less than 20% of their heights on coasts with no mangroves. The residents of Inguri – and other poor residents of Mozambique’s coastal villages – will be the first to suffer the effects of storm surges and flooding, and they can’t pay for “hard” infrastructure to protect their communities.  They can benefit from mangrove conservation. 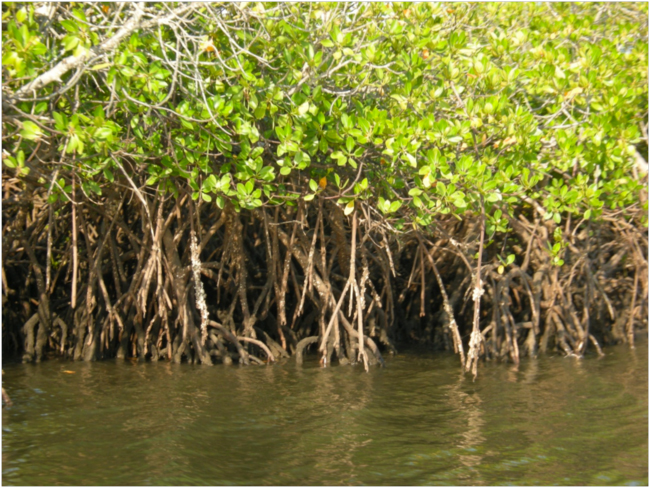 It is also possible to restore mangroves to areas where they once existed.  We saw mangrove restoration getting started in two places near Angoche. Although planting mangrove “droppers” – the already-sprouted dispersing seeds of these trees – is easy and effective for some species, the silvicultural science of how to restore each of the main species in its proper intertidal zone is not complete.  More pilot work on mangrove restoration is needed, and these efforts need to be linked with the social and economic development of the coastal communities of fisher-farmers here. 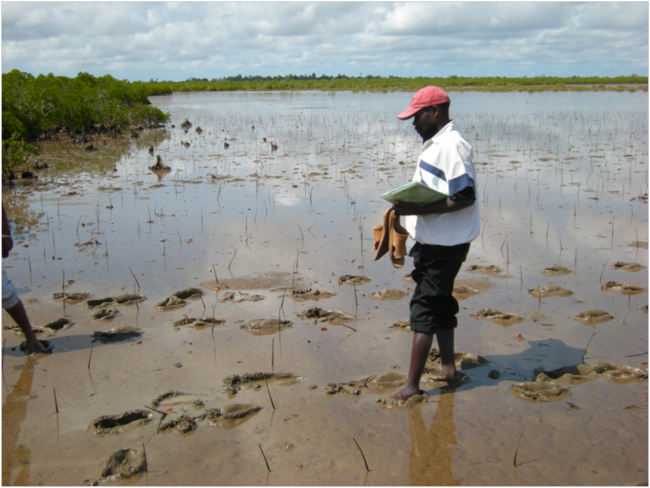 Mangrove conservation and restoration is important for resilience to climate variability and change. The physical protection from cyclones, winds, waves, and storm surges provided by mangroves, and their ability to trap and hold sediment and thereby build land, are ecosystem services provided by these intertidal forests. And mangroves provide another ecosystem service: the trees, and the highly organic mud in which they grow, store and sequester carbon from the atmosphere, and thus help to slow the global warming caused by our species’ unrepentant fossil fuel use. 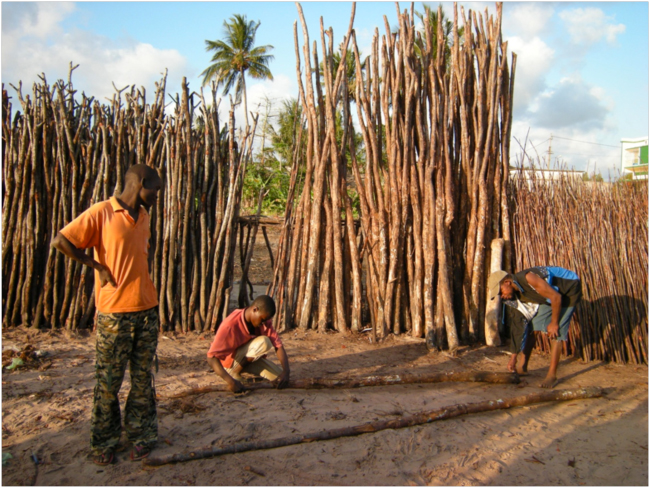 The sun was getting low, the water westward a blinding silver mirror, as we returned to the port.  The tide was higher, and we could run in much closer to shore, so our wade through the mudflats to where we parked was much shorter this time. We drove into Inguri, and went to the market where mangrove poles, like those we had seen being cut and loaded onto dhows, are sold: the “Home Depot” of Inguri.  We went to the same beaches we had seen from the water, and now saw them from landward. We looked more closely at the few remaining mangroves. A passing boy stopped and posed, smiling happily. 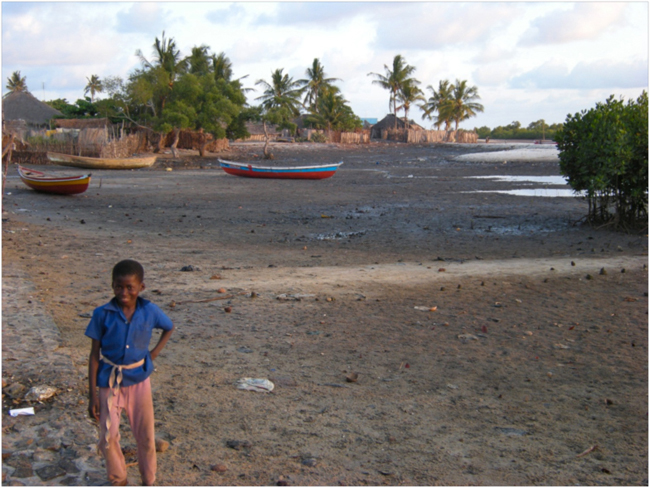 Note: The Ilhas Premeiras e Segundas was approved as a national marine reserve by the Council of Ministers of Mozambique on November 6, 2012. It is the largest marine reserve in Africa, with an area of 10,400 km2. For more information see: http://primeirasesegundas.net/2012/11/14/primeiras-segundas-archipelago-is-officially-named-a-protected-marine-reserve/