You are here: Home » Blog » Biodiversity » Fire Scar on a Triassic Tree

Fire Scar on a Triassic Tree

November 2013. Fire scars on trees have fascinated me since I first learned to recognize them.  Maybe because of their metaphorical quality: fire burns through the forest, but this tree survives with only part of its bark burned and cambium killed. The eager cambium under the surviving bark begins to grow over the scar, covering it year after year with a healing curl of new wood, while it is adding growth rings to the undamaged part of the trunk under the unburned bark.  Fire scars are a metaphor for survival, resilience, growth, and endurance in the face of the challenges life always brings, to trees or people.

Fire scar on a lodgepole pine in Colorado

I was introduced to fire ecology because of my studies of a tiny, red and yellow moth, brightly colored yet well camouflaged on blankeflower, Gaillardia aristata, a fire-dependent wildflower of the Colorado Front Range.  That’s a different story, which I wrote about last June.  During the years I was doing research on the Colorado Firemoth, Schinia masoni, I learned to recognize and appreciate fire scars from Merrill Kaufmann, a U.S. Forest Service fire ecologist, and Laurie Huckaby, a specialist in reconstructing the fire history of Colorado forests from tree rings and fire scars.

I remember going into the summer foothills of the Colorado Front Range west of Fort Collins with Laurie and Merrill on a fire-scar sampling expedition a decade ago. Merrill demonstrated his skill, acquired with long practice, using a chain saw to make a slice through a fire scar at the base of a tree without toppling or killing it.  It involved some tricky chainsawing, including plunge cuts – not recommended for amateurs.  Laurie used a simpler technique, extracting a pencil-sized core from the regrowth of wood around the fire scar and into the pre-fire trunk with an increment borer – a sort of hand-cranked, hollow drill.  This core could later be sanded smooth to count the growth rings since the scar and date the fire.

Cross section of a fire-scarred ponderosa pine; healing curls of wood can be seen at top left and right growing around the scar face where the fire killed the cambium (photo courtesy of L. Huckaby)

After learning all about fire scars from those experts, I finally recognized the treasure that was being used as a doorstop at my old family home in New Mexico. It was a fossilized section of a tree trunk that my dad and I had found on a hike together in the early-1980s in southeastern Utah. With my newly-acquired search image for fire scars, I did a double take when I next visited my dad: that looks exactly like a fossil fire scar! 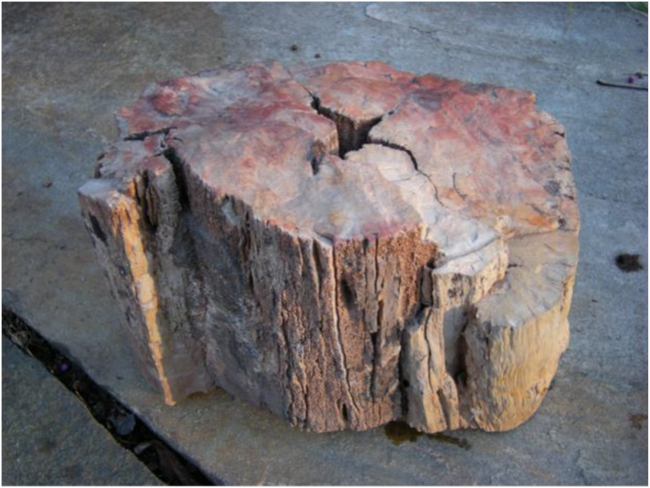 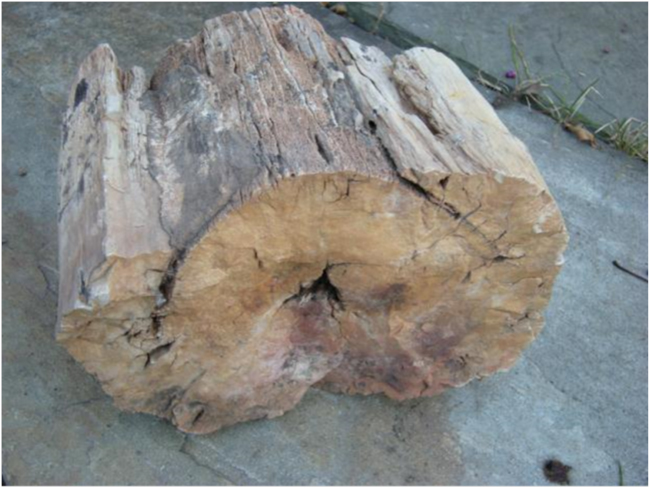 Lower side of the fossil tree trunk

The fossil wood served as a doorstop until about two-and-a-half years ago, when I lugged it with me to northern Virginia, where I live, after a decline in my dad’s health forced him to move out of the old house. Since I first recognized it as a possible fire scar a decade ago, I had thought about getting it cut and polished, hoping I could see the inner details of the fossil wood. But I hadn’t done that. Exactly why the coincident forces finally motivated me to do so, I’m not really very sure.  Dad died on November 27th, 2012.  Maybe that, and the symbolism of fire scars, led me to make a series of phone calls that eventually led to Mike, the owner of Easy Stone Center in Vienna, Virginia.  He normally cuts granite, marble, and other decorative stone, but he was willing to try sawing my fossil wood, with the caveat that he couldn’t be responsible if it shattered and was destroyed in the attempt. The fossil trunk went into his big diamond saw, and proved to be very hard, cutting beautifully and intact.

I took the two halves to another company that polishes granite countertops.  When polished, I could see even with a hand lens that the wood structure was surprisingly well preserved. Rays and cells of the ancient wood were still clearly visible.  And they showed exactly the same structure as a modern fire scar, with healing curls of wood growing over the face of the scar.

Cross section of the fossil tree trunk with the fire scar, with the fossilized healing curls of wood at top left and right, and a whitish, scar-associated band at the lower left

I knew the fossil wood was from the Chinle Formation, a geologic formation dating from the Late Triassic, deposited between about 209 and 225 million years ago, which is widely exposed in parts of northeastern Arizona, including the Petrified Forest National Park, and also near the Bears Ears in southeastern Utah where my dad and I had been hiking when we found it.

The Bears Ears: the bluffs that form the two mesas are topped by Wingate sandstone of Jurassic age; below them the Triassic Chinle Formation is exposed

Had anyone else ever seen a fire scar on a fossil tree?  I searched the internet and found nothing, and so decided to call the Petrified Forest National Park and try to talk to someone who might know.  My sleuthing led me to the park’s paleontologist.  No, he had never heard of such a thing as a fossil fire scar, but he suggested that I call a retired paleobotanist, now living in Albuquerque, New Mexico, who is the world’s expert on fossil plants of the Petrified Forest and the Chinle Formation.  I did.  He had never seen or heard of a fossil fire scar either.

The possibility that my dad and I had, by chance, stumbled onto the first fire scar fossil ever found became more and more intriguing. When I sent pictures of the specimen to these paleontologists, they told me that although they had looked at thousands of petrified logs, they hadn’t noticed any potential fire scars – and wouldn’t have noticed if they saw them because they didn’t know what a fire scar looked like. This was revealing: what we see is conditioned by what we are looking for, and what we are looking for is conditioned by what we know how to look for.  Without a “search image” – some knowledge of a pattern to look for – we may look at things without seeing something that may be there. That made sense to me.  I didn’t see a fossil fire scar in the piece of fossil wood from Bears Ears for twenty years, until I knew what a fire scar looked like.  Only then could I see the same pattern in the fossil wood.  Paleontologists, who are well-trained to see other patterns in ancient landscapes and fossils that are invisible to me, had no search image for fire scars, and so never recognized them even if they saw them.

It seemed that a very improbable course of events had put a piece of fossil wood with a fire scar in front of me.  I’m still wondering about the odds of that. Upon realizing that this piece of wood that had serendipitously fallen into my hands was, apparently, the first fire scar ever seen in a fossil tree, I began to think that it was a story worth telling to the scientific world.

Various further improbable connections led me to my co-authors of a scientific article describing this specimen. I worked through a network of contacts until I found a paleobotanist at the National Museum of Natural History in Washington, D.C., who took high-resolution digital microscopic photos of the specimen. He turned out to be from my hometown of Los Alamos, New Mexico; his younger sister was a high school classmate.  I “googled” for research on wood anatomy and tree growth. Modern trees that survive fires are known to grow faster after the fire, probably because the fire kills other plants and neighboring trees that compete for water, light, and nutrients, and also releases a pulse of nutrients from the burned vegetation that stimulates tree growth.  My search turned up a Spanish ecologist and wood anatomy expert who was eager to test the methods she uses with modern trees on this fossil wood.  Her analysis of the perfectly-preserved fossil wood showed the scarring event recorded in a narrow band of small, compressed cells stained with iron oxide, and larger cells reflecting faster growth after the fire, exactly as in the post-fire growth release of modern trees. We have submitted a paper to the leading journal of “paleo” research, documenting this fire scar on a fossil tree, the first ever reported. 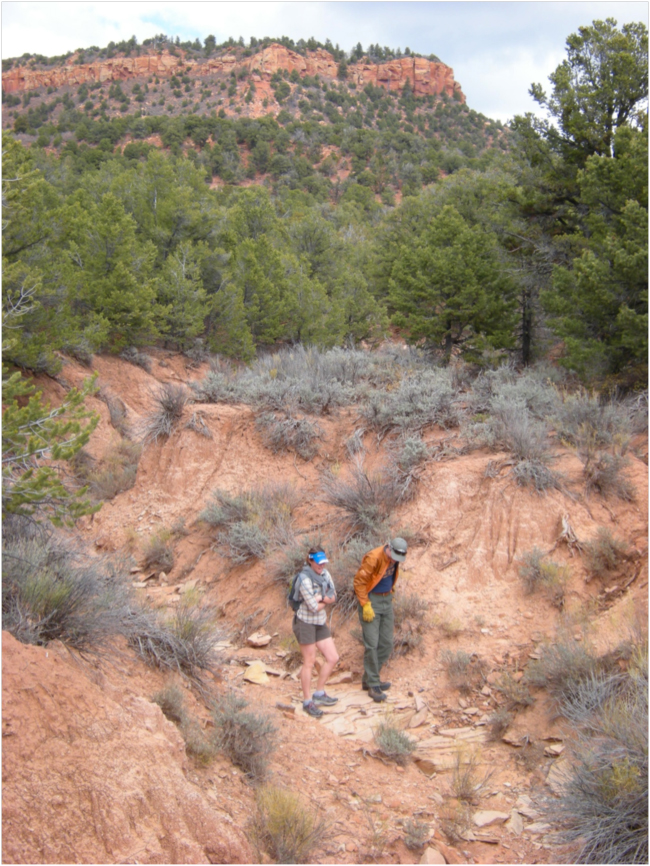 Two weeks ago I went back to Bears Ears, to reconfirm the location where my dad and I had found this specimen approximately thirty years ago.  I camped with my daughter and her husband at Natural Bridges National Monument, just as I had with my  parents then.  We spent a day below the Bears Ears, locating the contacts of each of the geologic members of the Chinle Formation.  In the area where I remembered finding the fossil with my dad, in the lowest stratum of the Petrified Forest member, we found more fossil wood that had exactly the same outside coloration as the specimen with the fire scar. It was a somewhat surreal, déjà vu day. Our searching confirmed the location of the specimen, which will be deposited in the National Museum of Natural History of the Smithsonian Institution in Washington.

I think of this piece of ancient wood, and the paper describing its significance to science, as a memorial to my dad, who found it, and safeguarded it for decades because to him it was beautiful and interesting.  Without that intuition of his, we still would not know that in the Late Triassic, 210 million years ago, fires sometimes raged across the landscape of Pangean forests, shaping their ecology and evolution, as fire still does in our own era, and that some trees survived those fires to heal and continue to grow.

The western bluff of the Bears Ears in afternoon light