The Freetown Peninsula is one of the only parts of coastal Africa, and the only place in West Africa, where mountains meet the coast.  When Portuguese explorer Pedro de Cintra sailed past this coast in 1462 he imagined he saw the shape of a lion in some of these mountains, and called the place Serra Lyoa, the Lion Mountains.  Starting in the mid-1500s, and especially in the late 1700’s when slaves from West African rice-growing tribes were in high demand in the slave-dependent colonial economies of the Caribbean and southern United States, small ports on this coast did a brisk business in human beings. Even after British anti-slavery activists founded Freetown as a settlement for freed slaves in 1787, the slave trade continued.

Freetown perches on steep slopes on the north end of the anvil-shaped peninsula. The flat side of the anvil faces the tropical Atlantic at 8 degrees north latitude.  The Banana Islands, once the base for British Navy ships that intercepted slave ships and freed the captives, lie just off the southern tip of the anvil. Forests cover the 37 kilometer-long chain of hills that parallel the coast.  With an area of approximately 17,000 hectares, or 170 square kilometers, this is the only remaining piece of the Upper Guinean Forest ecosystem in the western part of Sierra Leone. The Upper Guinean Forest is a biodiversity hotspot, full of unique and threatened species, including pygmy hippos, forest elephants, chimpanzees, and many other rare and endangered primates and birds. 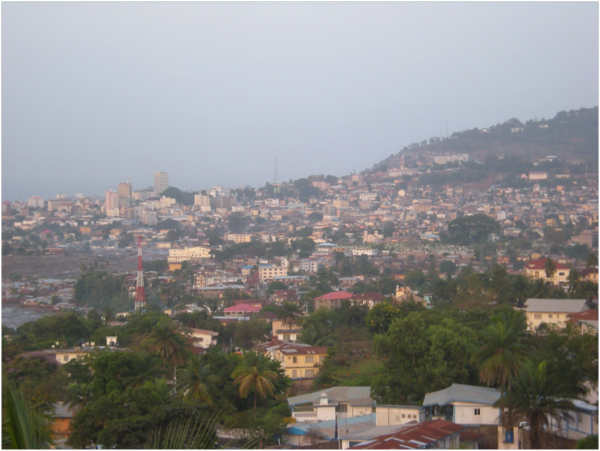 I had the good fortune to see these forests and the communities living below them – and and to experience the exuberant chaos of Freetown – on a recent trip to assist the STEWARD Program with a monitoring and evaluation system.  STEWARD stands for Sustainable and Thriving Environments for West African Regional Development. This program attempts to link the conservation of biodiversity and forests with community social and economic development. It is funded by the U.S. Agency for International Development (USAID), and implemented by the U.S. Forest Service International Programs and its partners in Sierra Leone, Guinea, Liberia, and Ivory Coast. 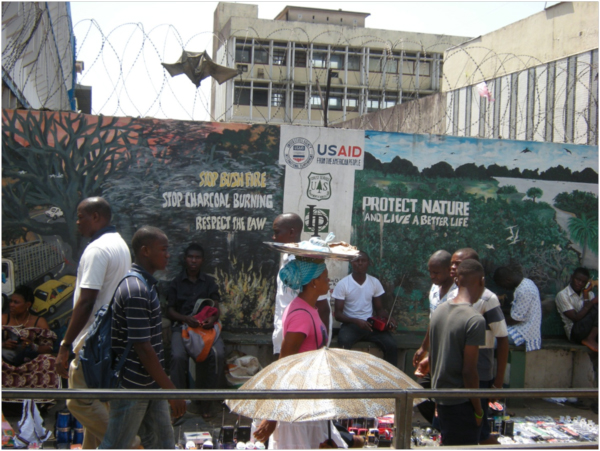 There must be some relationship between the dark colonial slave history of Sierra Leone and the bloody civil war that raged from 1991 to 2001. Sierra Leoneans I met seemed practical and resilient, but guarded.  Although Freetown is bustling with activity and movement, it seems a stretch to cast this in too positive a light.  It is a dirty, chaotic, poor city. The electricity goes off several times a day for the fraction of the population connected to the grid.  Backup electrical generators and trucked-in water are the norm. Trash, sewage, and stray dogs share the roadsides with throngs of walkers everywhere. Traffic is unregulated and gridlocked. A hopeful future can sometimes seem far away.

But with a car, the pristine beaches and fishing villages of the coast of the peninsula are only an hour away once you escape the traffic of town.  There, the noise and grit of Freetown fade, and feel far away. The clean ocean, green hills, and coastal communities feel benevolent and healthy.

On a Saturday morning we drove south along the coast from Freetown to Sussex Beach, where the WAPFR Project was sponsoring an “Environmental Beach Festival,” with participation of the coastal communities that border the western edge of the Western Area Peninsula Forest – that last remaining piece of the Upper Guinean Forest in western Sierra Leone.  These coastal communities have names like Lakka, Sussex, Bawbaw, Tokeh, York, Black Johnson, John Obey, Bureh, and Kent. The project – “Conservation of the Western Area Peninsula Forest Reserve (WAPFR) and its Watersheds,” is funded by the European Union, and implemented by a German NGO called “Welthungerhilfe,” with a local Sierra Leonean partner NGO, the Environmental Forum for Action (ENFORAC). 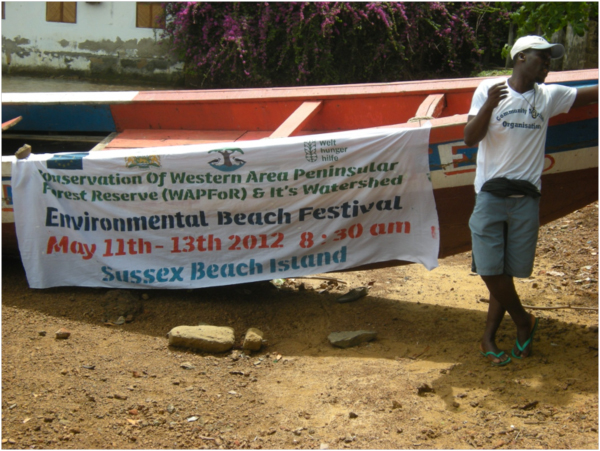 From the town of Sussex we were ferried in a big local fishing canoe across a narrow inlet to the long sandspit north of town where the festival was being held. Food was being served from palm-thatched shelters on the beach by groups from the participating communities.  Before he dashed off to join a sand soccer game, we talked briefly with Jochen Moninger, the German director of the WAPFR Project. After a long walk north on the completely deserted, pristine beach, I ate lunch with my colleagues from the STEWARD Program at a table in front of the food stand of the Lakka Beach Boys Association.  A filet of fresh grilled barracuda with a spicy marinade that reminded me of Jamaican “jerk”, with rice and cold Sierra Leonean “Star” beer – high tide waves washing almost under our feet – goes on my list of “best meals ever.”

After lunch we took the boat back to Sussex, and drove south to John Obey, where we had reservations to stay at a community-run ecolodge called Tribe Wanted.  This lodge was the brainchild of Ben Keene, who also developed a community-based ecolodge in Fiji. Its simple, rustic structures reflect a noble idea: linking culturally and ecologically sensitive guests with a rich local community and environment.

Sixty-one watersheds drain the hills of the Western Area Peninsula.  The forests covering the steep slopes provide an essential ecosystem service: regulation of the hydrological cycle, stabilizing the flow of water from the rainy to the dry season, preventing erosion and landslides, and maintaining the quality of water in the small rivers reaching the coast and coastal communities. Only four of these watersheds are currently used to supply water to chronically water-short Freetown.  Altogether these watersheds are essential to around 1.5 million people, about 20% of the population of Sierra Leone.  And the forest that protects them is under siege, as was obvious on our drive south from Freetown.  Poor people need building materials – poles and boards; and fuel for cooking – wood and charcoal.  All are free for the taking from the forests. 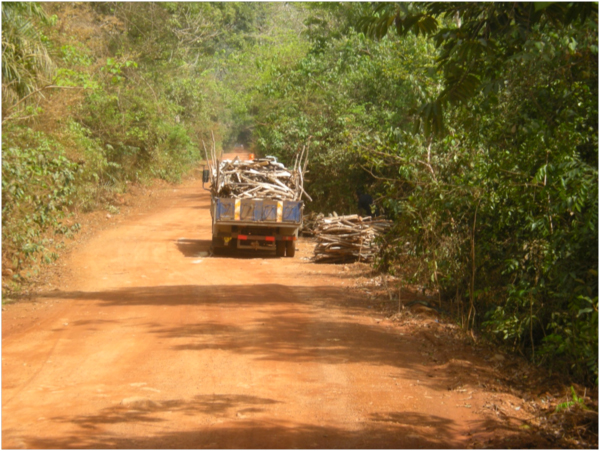 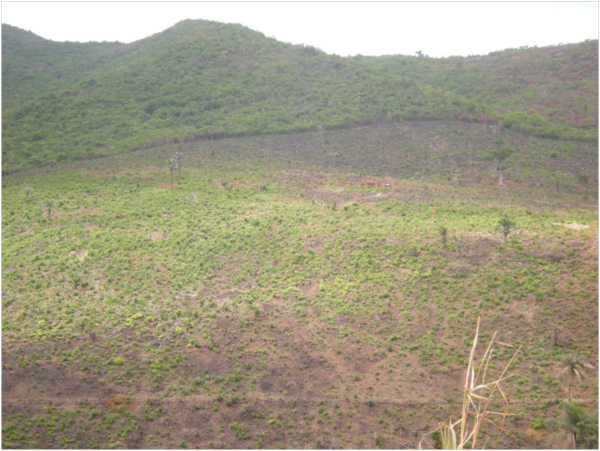 Clearing of the forest near Freetown 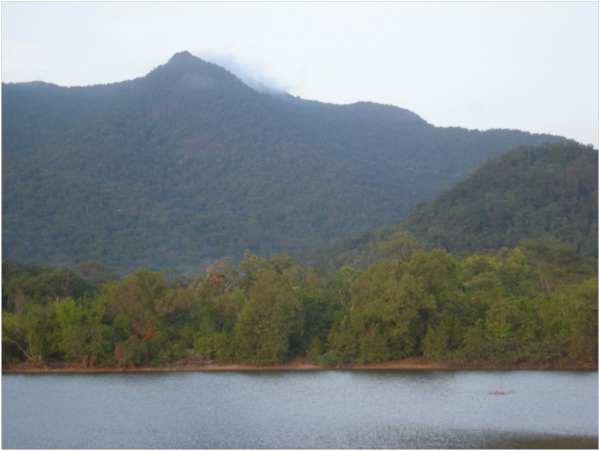 The WAPFR Project has been working with the poor coastal communities to increase their understanding of the value of the forests and watersheds above them, guarantee their rights to forest uses and benefits, develop agreements about boundaries, and monitor and enforce agreements about forest and watershed protection. The STEWARD Program is supporting similar objectives on a larger, regional scale in the four countries in which it is working. 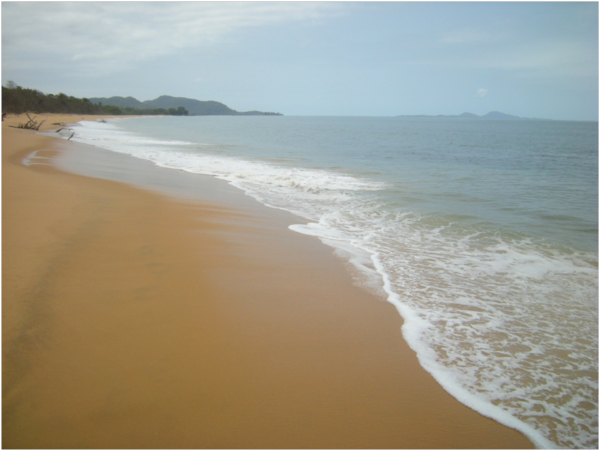 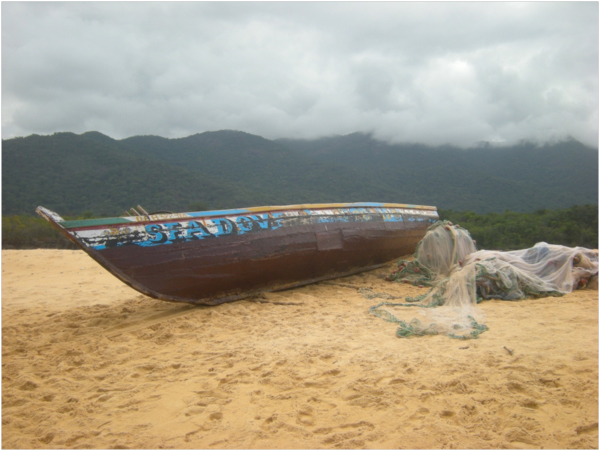 The Sea Dove and her nets on John Obey Beach, below the Western Area Peninsular Forest 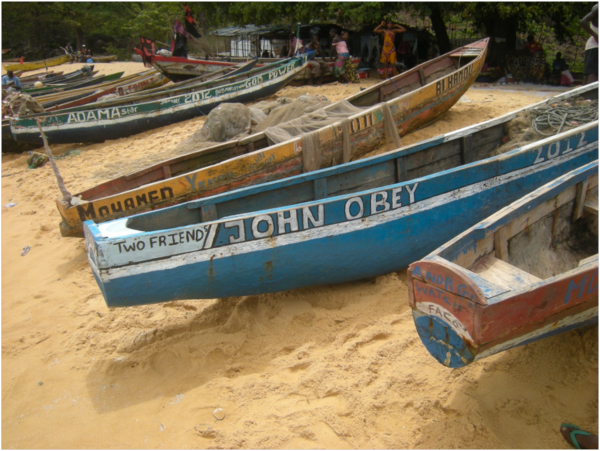 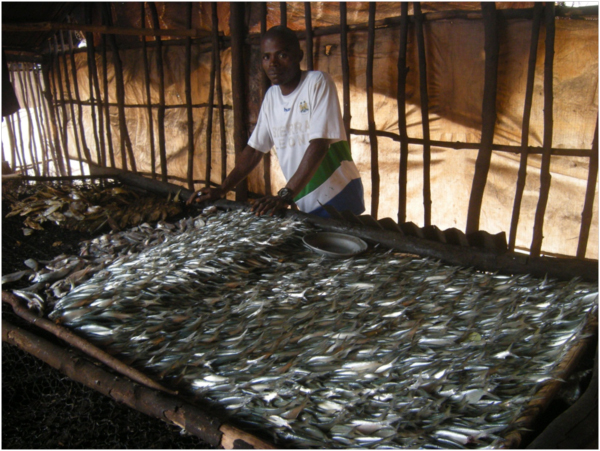 Elijah Eccles in the sardine smoking hut at John Obey 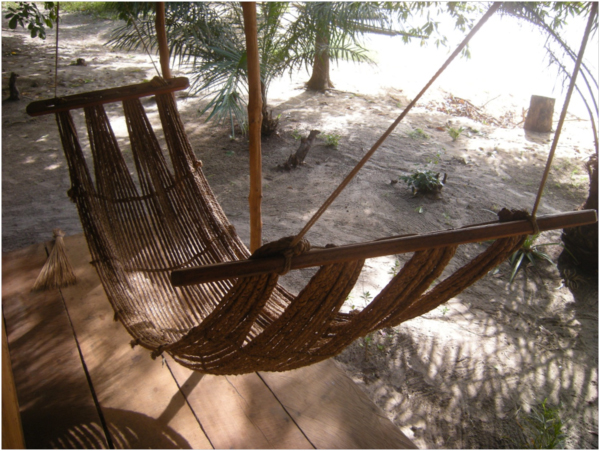 Back to Freetown on a Sunday afternoon, my spirit refreshed, ready to tackle the challenge of understanding, monitoring, and evaluating how a small amount of U.S. aid can help to shift the trajectory of development here in Sierra Leone from uncontrolled exploitation and degradation of the country’s forests and other ecosystems to a sustainable path.  A daunting challenge, to say the least.  But somehow, in the images I carried from the weekend of the thriving, natural-resources-dependent community of John Obey, my mood shifted from dark to light, heavy to hopeful.