We were off early from the Ngiri Guest House at Lewa for an all day trip to visit two community conservancies whose formation has been supported by the Northern Rangelands Trust (NRT).  We drove through Isiolo and on to Archer’s Post, where we crossed the muddy Ewaso Ngiro River – its red muddy water carrying the soil we had seen washing from those bare, unplanted wheat fields on the sides of Mt. Kenya near Nanyuki in the heavy rains of two days ago.  Mt. Kenya is the catchment and headwaters of this river, which flows northeast across the arid northern savanna and bushland, a ribbon of lifegiving water for the traditional Samburu, Boran, and Rendille pastoralists of the area.  And for wildlife: elephant, kudu, gerenuk, Grevy’s zebra, and all the rest. 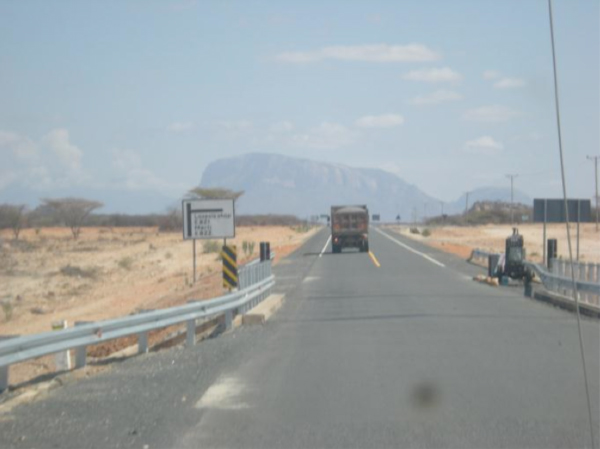 North of Archer’s we were on a smooth, wide-shouldered two lane highway just completed by a Chinese contractor.  The massive block of Lolokwe, a mountain that rises a thousand meters above the surrounding plains, loomed to the north. The pavement ends fifty miles north, but they are working to connect with paving coming south from the Ethiopian border.  We turned off to the southeast before hitting the end of the pavement on a rough sandy track through arid bushland.

It hasn’t rained here since last December, said Peter Leshakwet, NRT’s regional coordinator for the greater Sera area. Eight months without rain.  What a contrast to the forest and farm belt of the mountain, where two days ago we were in a torrential downpour. After an hour of rough driving, the driver finally stopped and locked the hubs of the Land Cruiser. We fishtailed through the sand, crossing a wide dry riverbed toward a thick oasis of doum palms (Hyphaene thebaica).  As we drove into the palm grove we saw the simple stone headquarters of the Sera Conservancy, and waiting for us in front were half a dozen community representatives. Most were Samburu, but Sheikh Dabaso Ali was from the Borana tribe. 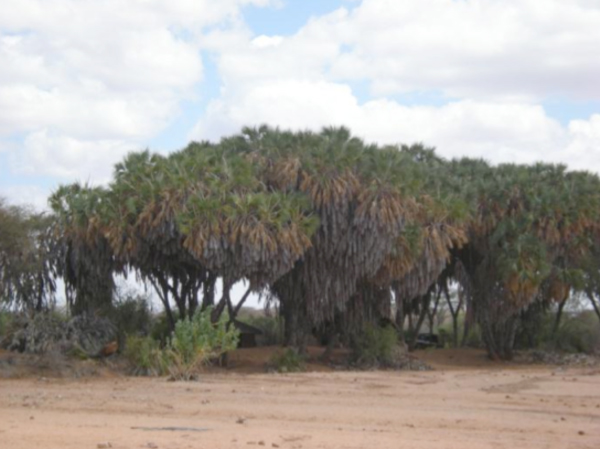 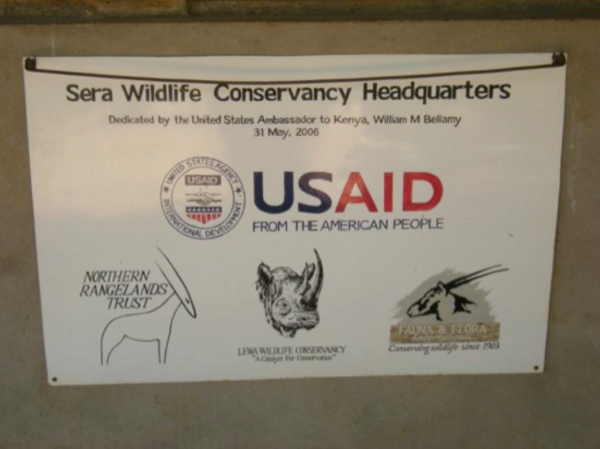 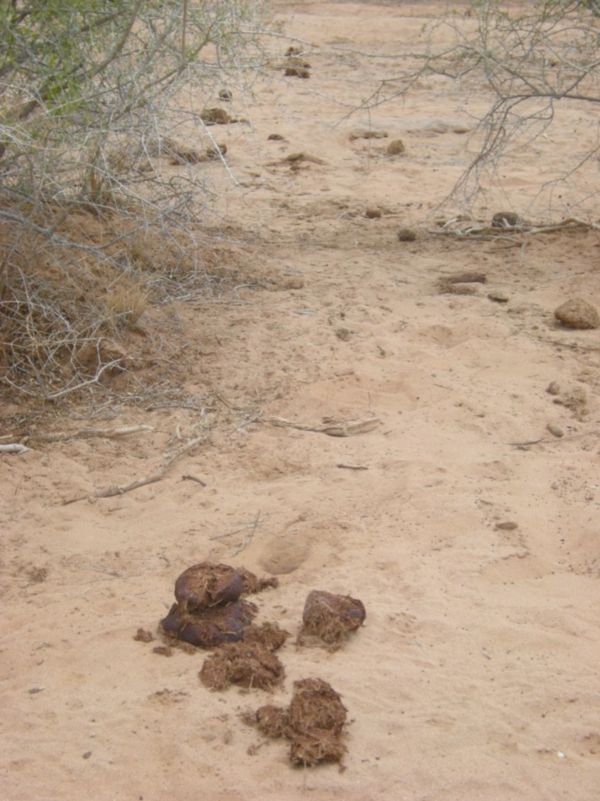 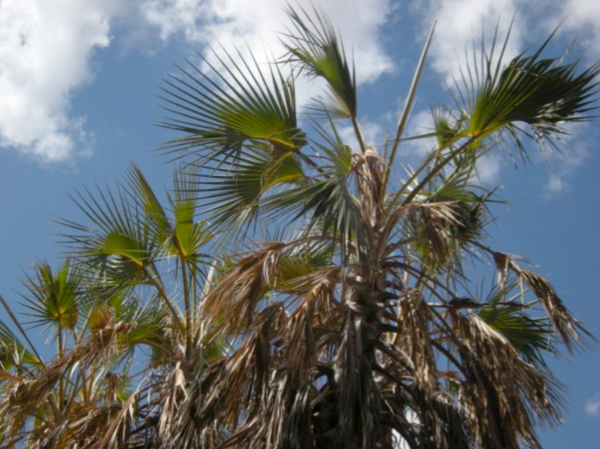 This conservancy lies at the junction of territories of three traditional pastoral groups – those two, plus the Rendille.  In the rough and tumble scramble for grazing resources for their herds of cattle, camels, goats, and sheep, traditional pastoralists often vied for territory by raiding the camps of other tribes and stealing livestock.  In fact, cattle-raiding was seen as a young man’s job in many of these societies.  But in the last decade, with an influx of displaced Somalis into the area, bringing with them lots of automatic weapons from the fighting in Somalia, cattle raiding got a lot more dangerous.As we talked about wildlife, pastoral livelihoods, and how hard it was to live in this drought prone environment, the main benefit these men saw from forming the community conservancy was security:  security from armed Somalis, who enter the area armed with automatic weapons; security from rebellious young men of other tribes, also armed and stealing cattle.The patrols and radio system the community has set up can observe suspicious movements, and intercept poachers and cattle rustlers.  In fact, they told us, what they are doing is merging the traditional pastoral communication system, in which elders managed livestock movements and negotiated with neighboring clans and tribes, more or less keeping peace and keeping stock and people alive during hard times, with modern technology – radios, meetings of community representatives, cooperation with the national police.

Recently, they said, stolen cattle have been returned to their owners and the thieves punished.  Security for people means security for wildlife, they say.But the traditional pastoral economy is a rough life, and many of these men do not see their children staying in the traditional bomas in the bush.  When they grow up, most move to towns looking for other work.  These tribes are investing heavily in their children’s education – in fact they said, the average pastoralist will spend three-quarters of any cash they earn on school fees, uniforms, and other costs of education.  And they are looking for ways to diversify their economic base.  Wildlife tourism is one possible option.

A huge fraction of the income from international wildlife tourism in Kenya flows to three areas: Amboseli, Masai Mara, and Lake Nakuru.  Diversifying the geographic base for wildlife tourism in Kenya would bring tourist dollars to more poor communities in these pastoral areas.  At the moment, the Samburu area is a bit remote, and the infrastructure less developed than in the wildlife meccas. But the area is being slowly discovered by more adventurous and demanding tourists, who may have been to Amboseli or the Mara and are tired of the lines of minivans waiting to see a lion or cheetah.

At Sera, the community has constructed a small permanent waterpoint – just a pool in some rocks along the seasonal river where they pump water up from the same underground flow that the doum palms are tapping here.  That has attracted a group of 18 elephants to hang around this place – otherwise they would have moved long ago in search of water for drinking.  We saw their wrinkly prints in the noon sand of the riverbed, they were here this morning, or maybe last evening.  The Sera group is now in negotiations with a tourist operator to open a simple tented camp for wildlife tourism here near their headquarters.

On the way back to Lewa in the late afternoon we stopped just off the Chinese road at the office of the Kalama Community Wildlife Conservancy, which was established in 2002, and now has a high-end lodge on its land, Saruni Lodge, owned by an Italian investor.  The Kalama Conservancy “logo” shows a pastoralist woman milking an elephant.  Traditionally, cattle or camels were the wealth and source of life for the people, converting grass and forage inedible to humans into delicious milk and meat.  Although they shared their land and water with wildlife, the idea that wildlife were a source of life and wealth takes awhile to get used to.  But slowly, in these northern rangelands, the idea seems to be taking hold.  There are now 18 community wildlife conservancies on pastoral lands stretching north from Lewa to Marsabit, and according the NRT, the demand for assistance from pastoralist communities in forming conservancies just grows and grows. 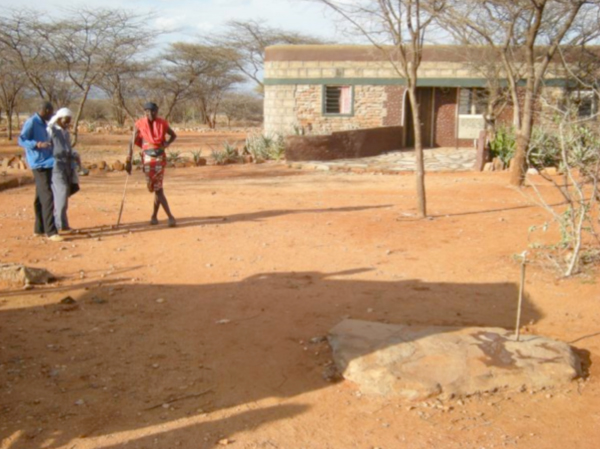 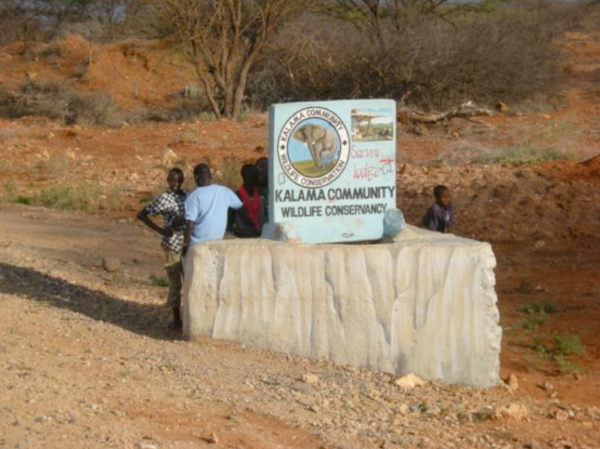 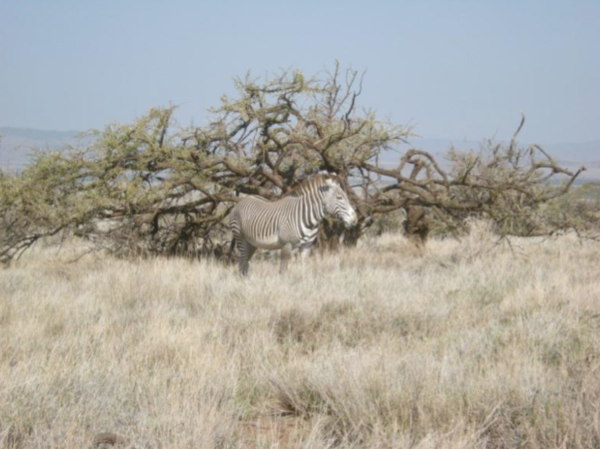