About 8:30 on Sunday morning the boat pulled up in front of Lamu House.  We scrambled down the steps and climbed in with our gear, joining two staff members of the USAID-funded SECURE Project and two staff from the Kibodo Trust, for the three hour trip north to Kiwayu Island and Mkokoni village in the Kiunga Marine National Reserve.  The reserve is adjacent to the Boni and Dodori National Reserves, also managed by the Kenya Wildlife Service, which conserve examples of coastal dry forest ecosystems with abundant wildlife.

With a 140 horsepower outboard, the 25 foot blue and white fiberglass speedboat shot across the water.  The tide was high, so slipping through narrow passes between mangrove-fringed islands was no problem.  At several points we passed open channels to the ocean, and we banged and bounced across the big swells, wind ripping at our hair and clothes, hanging on like rodeo riders.  This now relatively pristine area is the site of the proposed Lamu Port.  Kevin Doyle of the SECURE Project pointed out a communications tower rising above mangroves on the horizon, where he said there is a small US Navy post that is mainly here to watch for Somali pirates offshore.  We made good time, and before noon were landing through the gentle surf in front of the remote Kiwayu Safari Village, a rustic, high-quality lodge near Mkokoni village, where we would stay. At this point we were about 40 kilometers from the Somalia border. 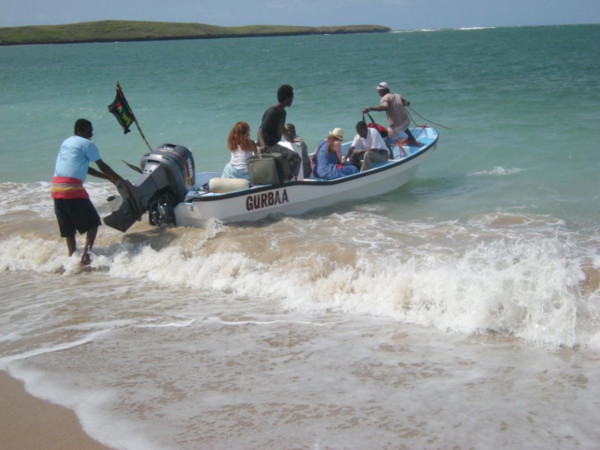 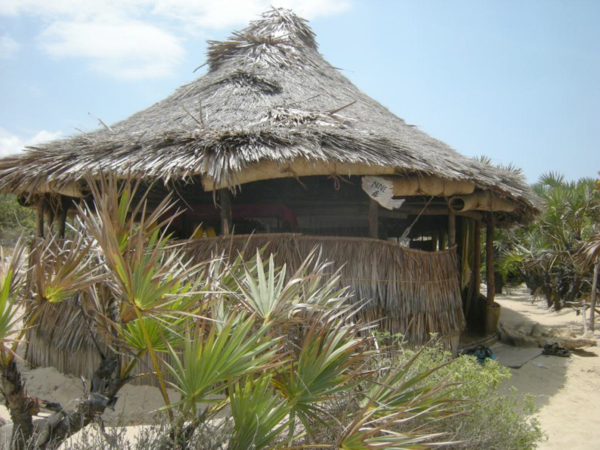 The beaches of the Kiunga area, protected by fringing reefs and coral islands, with extensive seagrass beds in lagoons, nearby mangrove forests, and little coastal development, are prime habitat for sea turtles.  Five species are found in the area.  Green (Chelonia mydas), Hawksbill (Eretmochelys imbricata), and Olive Ridley (Lepidochelys olivacea) turtles nest and feed along this coast, while the Loggerhead (Caretta caretta) and the Leatherback (Dermochelys coriacea) feed and migrate through.  The nesting species are the most exploited, for meat, oil, and eggs.  Degradation of nesting habitat from coastal development and capture in fishing nets also threaten sea turtles. 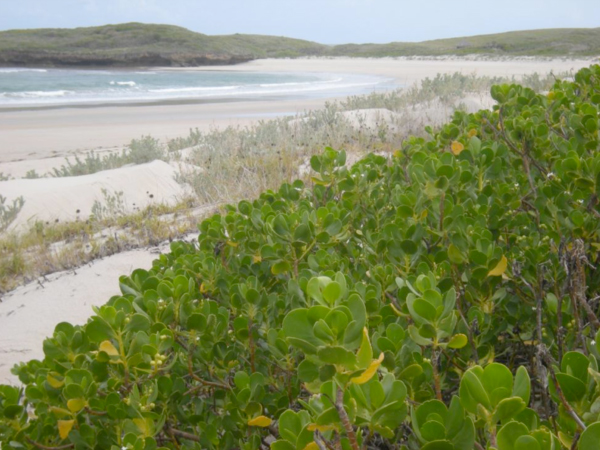 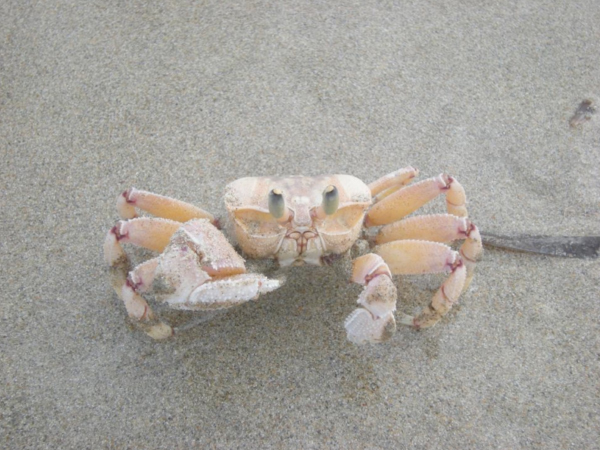 On Monday morning we hiked to the top of the high dunes behind the beach, guided by Camilla Pelizzoli, whose parents established Kiwayu Safari Village as a coastal safari camp in 1973.  She remembers when elephants wandered on the beach and African wild dogs roamed the dunes.  The old, stabilized, thickly-vegetated dunes act as sponge for rain during the rainy season, absorbing fresh water and feeding it into sweetwater springs in the sandy hollows, and spilling some inland to feed seasonal pans and waterholes at the edge of the Boni and Dodori forests. In the bottom of one of the hollows where the water table comes close to the surface, a well and small pumphouse feeds water to the Kiwayu lodge and parts of the community of Mkokoni.  As we passed, a Kenya Wildlife Service ranger was washing the dust off an old Land Rover – perhaps not the most essential use of water in this environment.  In various places cut palm leaves from the low-growing dune palms were drying.  These are the raw material for mats and thatched roofs of which local houses, and the bandas of the Kiwayu Safari Village, are made.

View from the high dunes 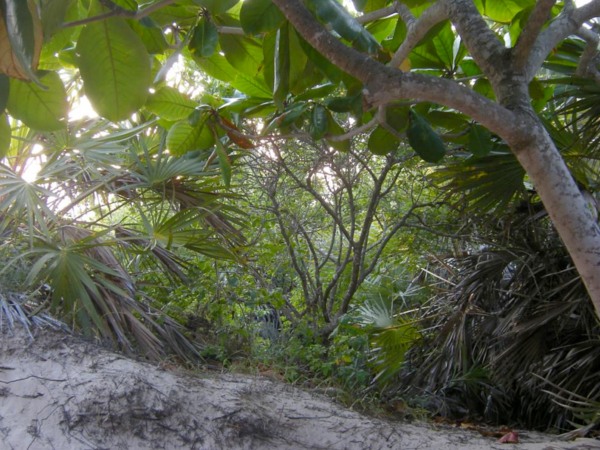 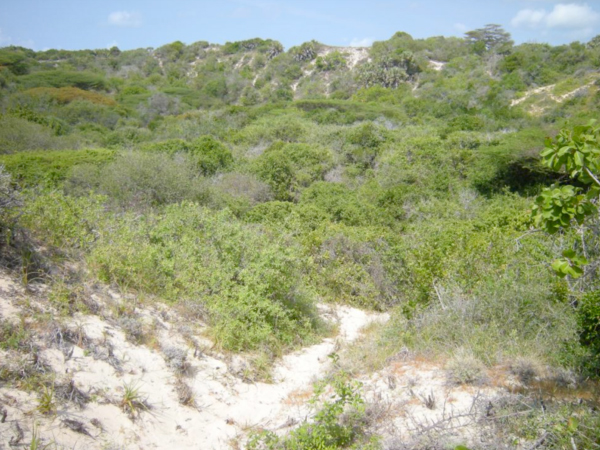 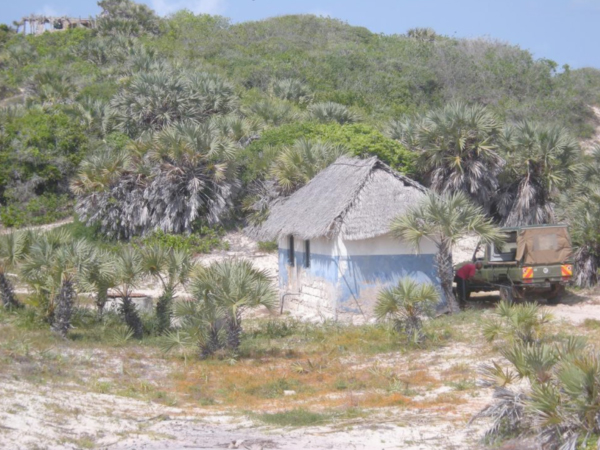 Well and pumphouse, washing the truck

Overlooking the Dodori National Reserve from the high dunes

After returning from the dunes we walked down the beach to Mkokoni, a small village whose residents make a living mainly from fishing and working at “KSV,” as the Kiwayu lodge is called.  At one point we passed a long wall, recently build of coral blocks, enclosing a parcel of land owned by a white family.  No one quite seems to know how community land suddenly got sold to a white person not from the area, but it happened after the last election, and everyone thinks it had something to do with a payoff from the local Member of Parliament who was elected.  After building the wall, the landowner installed a diesel-powered desalination plant, and piped some of the water to a water point in Mkokoni where community members can come for water.  This must have eased some of the tension, but still no one is sure what plans the owner has for the property.  A big beach resort, maybe? 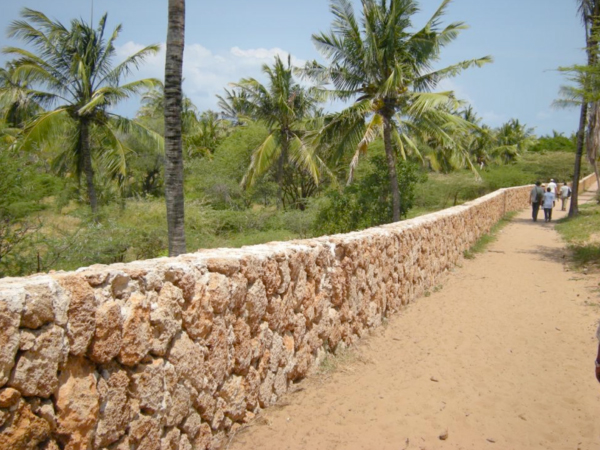 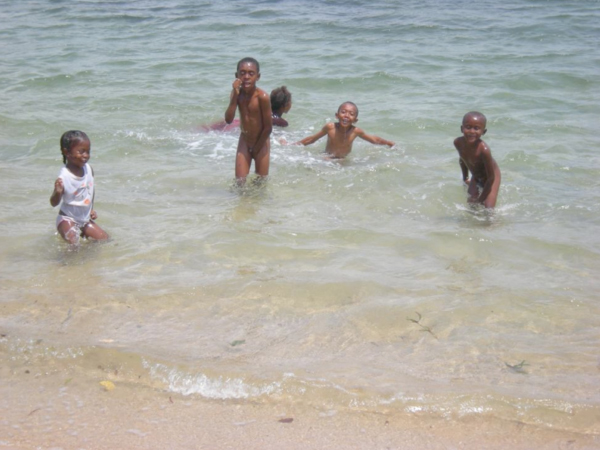 For more photos of the Kiunga Marine Reserve beaches and dunes, go to the gallery.