Athman Seif, director of “MaMa,” the Malindi Marine Association, met us at the Malindi Airport after the short flight from Lamu.  He would be our host and local guide for the next couple of days as we learned a bit about the dry coastal forests and coral reefs of this area.

These unique dry coastal forests, which formerly occupied a nearly continuous strip from southern Somalia to northern Mozambique, are now highly fragmented and occupy only a small fraction of their original area.  In Kenya there are now over 100 patches covering an area of about 660 square kilometers.  The Arabuko-Sokoke Forest near Malindi, now protected in a National Forest Reserve, is said to be the largest remaining patch, at around 400 square kilometers.  On the south coast,  a number of small forest patches called “kaya,” protected for historical and spiritual reasons by local people, also contain examples of this forest type.  For some reason likely having to do with isolation from forests that covered larger areas in the long-distant evolutionary past, the coastal dry forests contain lots of “endemic” species – species with narrow distributions found nowhere else. In Kenya’s coastal forests, about 43% of around 4,000 plant species are endemic; 21% of around 250 reptiles; and eleven endemic birds and the same number of endemic mammals can be found. In the Arabuko-Sokoke Forest, the Sokoke Scops Owl (Otus ireneae) and the Golden-rumped Elephant Shrew (Rhynchocyon chrysopygus) are two examples of local forest endemics.  The Golden-rumped Elephant Shrew is the largest of the African elephant shrew family, about the size of a small rabbit, and is only found in these coastal dry forests. 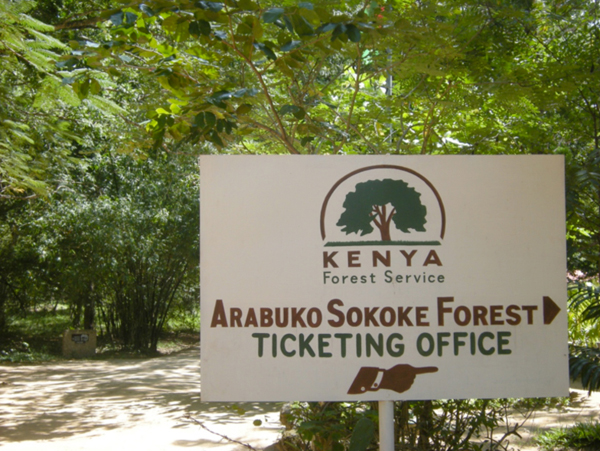 On our way to visit the Arabuko-Sokoke Forest, we stopped at the Kenya Forestry Research Institute’s Coastal Eco-region Research Center in Gede to visit Dr. M.T. E. Mbuvi, a scholarly scientist who has been studying forests and their conservation for decades.  If you fly over the forest, he said, it looks intact, but in fact it is degraded and the species composition has changed.  High-value trees, such as Afzelia quanzensis, Brachystegia spiciformis, and Brachylaena huillensis have been selectively cut and depleted in certain areas. Afzelia  is a favorite wood for window and door frames, shutters, furniture, and boat building because it is  hard and easy to work, it polishes beautifully, is durable, and is resistant to termites and borers on land, and even to boring mollusks, sometimes called “shipworms,” in seawater. Muhuhu, Brachylaena huillensis, is a favorite of woodcarvers.  The woodcarving industry in Kenya generates an income of over

$10 million each year for 60,000 carvers and their dependents, but it has also contributed to the decline of favorite carving species such as muhuhu and ebony (Dalbergia melanoxylon).

After checking in at the forest headquarters, we were soon passing through an electrified fence built to keep the roughly 300 elephants that live in Arabuko-Sokoke in the forest, and prevent them from wandering out onto shambas where they would very likely cause conflicts with local farmers.  In fact, Dr. Mbuvi had told us, this was becoming a problem – elephants were starting to destroy vegetation around one of the main waterholes in the forest, and would likely begin to change the structure of the forest itself if not allowed to move more widely.  A corridor to let them move all the way to Tsavo East National Park is needed, he said.  As we drove down the sandy track, the forest closed in, and we started to see big Afzelia and Brachystegia trees.  We finally reached the waterhole, where a stairway had been built around and up a large baobab to give a better view.  From the platform halfway up the tree, the effects of elephants on the vegetation was obvious. 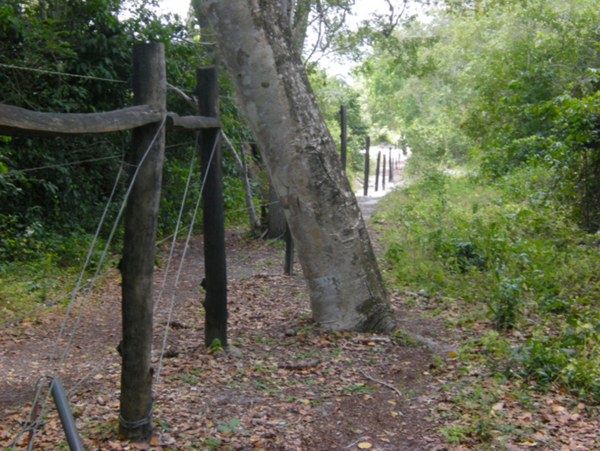 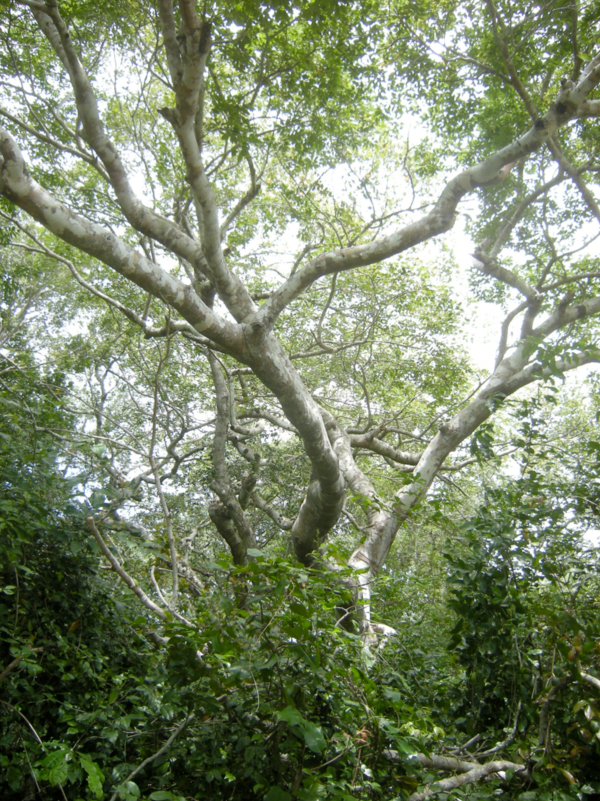 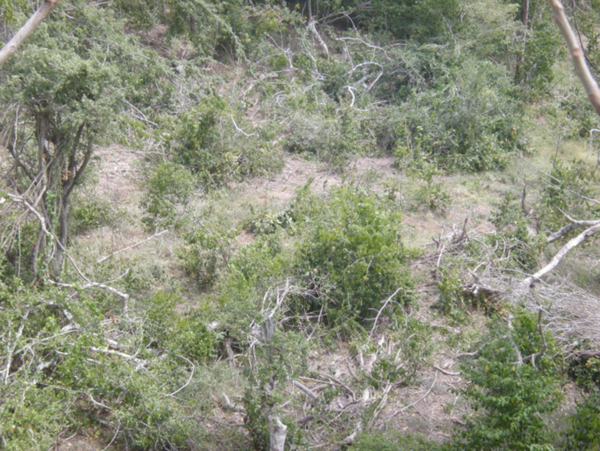 Elephants like to pull down trees to eat tender leaves!