You are here: Home » Blog » Biodiversity » The Art of Ecology: Sketching with Cole and Church

The Art of Ecology: Sketching with Cole and Church

May 2015. Even now, in the second decade of the 21st Century, our view of the relationship between humans and nature, and our identity as a society, is shaped by the artists of the Hudson River School, which was the dominant artistic vision among American artists from 1825 to 1875. “To read the present through the past seems especially instructive at this moment in the nation’s history. The nineteenth century offers many clues for Americans and for citizens of other cultures as to political, spiritual, and philosophical attitudes that are still part of the fabric of American culture,” Barbara Novak wrote in her 2007 preface to a new edition of her classic study of the Hudson River School, Nature and Culture: American Landscape and Painting 1825-1875.

I wanted to try to understand this perspective, to look through this window on the past, to better understand how this old foundation of American nature conservation might inform our challenges and choices today. So I took a trip to the territory of Thomas Cole and Frederick Edwin Church, in the Hudson River Valley just east of the Catskills Mountains. I stopped at Thomas Cole’s home at Cedar Grove, in Catskill, New York, and at Frederic Church’s grand hilltop mansion, Olana, not far south of Hudson. After contacting and convening their spirits, we packed and set off together for the creeks and mountains to the west, to revisit some of the places they had sketched… Like the lunch with Gifford Pinchot at Grey Towers that I described recently, of course, our trip together was imagined… but nonetheless real. 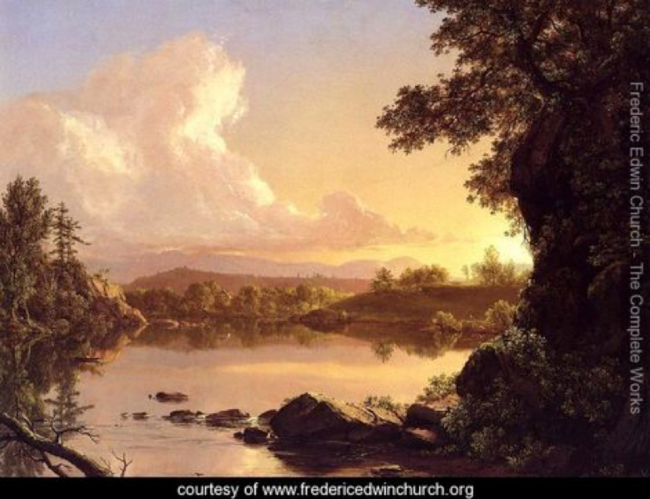 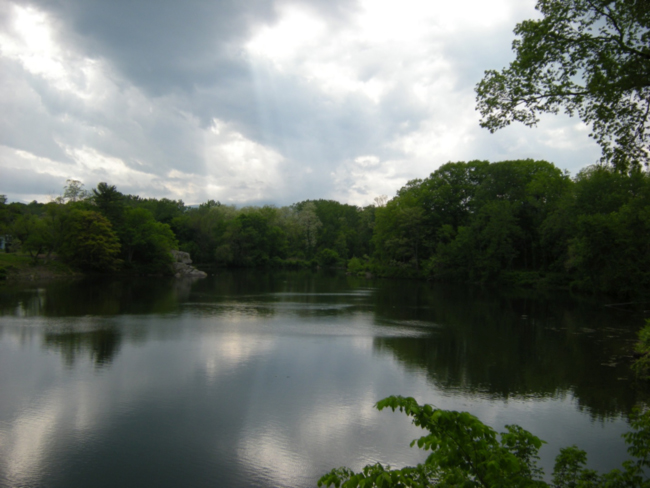 Thomas Cole (1801–1848) was born in England, but emigrated to the United States with his family in his teens. He moved from Ohio, to Pennsylvania, to New York, and in 1927 began to paint Catskill Mountain landscapes from Cedar Grove, a farm in the Hudson River town of Catskill, New York. He married the niece of the owner of the farm in 1836, and settled in, establishing his studio and reputation there as the founder of the Hudson River School of landscape painting. He died at the relatively young age of 47 in 1848. Cedar Grove is now a National Historic Site. His most famous pupil, Frederic Edwin Church (1826–1900), was born in Hartford, Connecticut, to a well-to-do family. His father was a jeweler, and later an official of the Aetna Life Insurance Company. Frederic displayed a talent for art at a young age, and the family’s wealth allowed them to send him to study with Cole at the age of 18, from 1844 to 1846.

Frederic Church was a fanatical fan of the great German explorer and geographer Alexander von Humboldt (1769 – 1859), and followed Humboldt’s footsteps to Ecuador on two painting trips, in 1853 and 1857. One result of those trips was his grand masterpiece, Heart of the Andes, now displayed in the Metropolitan Museum of Art in New York. Church unveiled this painting at a grand showing in New York in 1859, and one afternoon at the showing he met his future wife, Isabel Carnes, whom he married in 1860. They eventually built and settled at Olana, a mansion designed in a fantastical Middle Eastern style on a hilltop overlooking the Hudson Valley just south of Hudson, New York. Olana is now a New York State Historic Site. 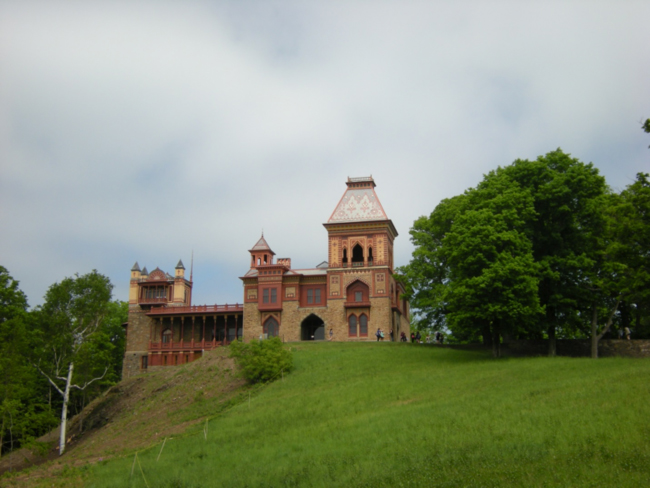 Some surprising coincidences of dates show the ferment of the times: In 1859 The Origin of Species was published; Frederic Church displayed his painting Heart of the Andes to great fanfare in New York, and was poised to travel to Berlin to show the painting to Alexander von Humboldt. But before he could do so, Humboldt, inspiration to both Darwin and Church, died. All around them European and American culture was in a state of ferment. Political, economic, and scientific revolutions were underway, seeking their footing. Philosophy and art were struggling to keep up with the times, and to translate the cultural meaning of the dynamic new discoveries of exploration and science. New encounters with the nature and cultures of the Americas and Asia challenged and stressed Old World, Eurocentric, Christian worldviews.

Barbara Novak, whose analysis of the Hudson River School is still the definitive work on its wider cultural importance, wrote that “When writing about American landscape painting of the nineteenth century, I was concerned to move the borders of a narrowly defined art history outward to include a broad array of contextual matters – philosophical, religious, literary, scientific, social – as they were borne toward the great thunderclap of 1859, when The Origin of Species appeared.”

Scientists, philosophers, and writers – Humboldt, Rousseau, Darwin, Wallace, Emerson, Thoreau, Whitman, Twain, and Muir – and Thomas Cole, Frederic Church, Albert Bierstadt, and other painters of the Hudson River School – responded, and began to collectively create a new worldview. All of these men were quietly giving up on the mainstream Christian religion of their day, and shifting their spiritual worldview to “nature.” But their inclinations and intuitions went against the grain of the dominant culture, and so they expressed their views subtly and politely in their writing and art.

Scholars of the Hudson River School often talk about how the painters associated with the school sought to visually portray the view that God was immanent in the world: that what we see in landscapes and skyscapes and luminous light is the same as the “God” of the dominant Christian religion of the time. Barbara Novak elaborates on the cultural context: “In the early nineteenth century in America, nature couldn’t do without God, and God apparently couldn’t do without nature. By the time Emerson wrote Nature in 1836, the terms “God” and “nature” were often the same thing, and could be used interchangeably …most religious orthodoxies in America obligingly expanded to accommodate a kind of Christianized pantheism. Ideas of God’s nature and of God in nature became hopelessly entangled… the early nineteenth century entertained contradictions it did not attempt, or perhaps dare, to resolve.” Emerson, in his 1841 essay Circles, wrote: “We can never see Christianity from the catechism – from the pastures, from a boat in the pond, from amidst the songs of wood-birds, we possibly may.”

But – and here the painters had an advantage over the writers of the time, perhaps: visual images speak for themselves. One can paint a sunset or a mountain scene or a waterfall, and convey an emotional meaning and message that doesn’t need an explication in words. 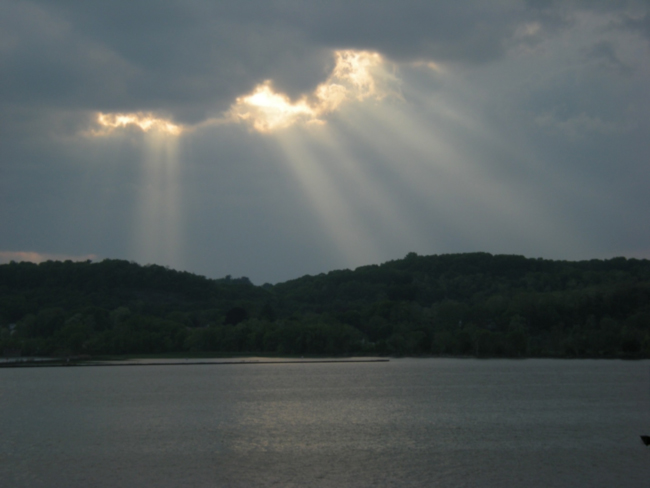 Afternoon view across the Hudson after sketching with Cole and Church. May 2015.

Aaron Sachs, an environmental historian at Cornell University, and author of The Humboldt Current, an insightful analysis of the influence of Alexander von Humboldt on science and popular culture of the 19th century, compares and contrasts the “worldviews” of writers David Henry Thoreau and his older mentor Ralph Waldo Emerson, and painters Frederic Church and his teacher Thomas Cole: “Even more noticeable than the shift from Emersonian Transcendentalism to Thoreauvian Humboldtianism, meanwhile, was the parallel passing of the artistic torch from Thomas Cole to Frederic Church, which took American art from the shores of the Hudson to the flanks of Ecuadoran volcanoes. In volume 2 of Cosmos, when Humboldt quotes one of his literary colleagues on the difference between older works of art, “interwoven with allegorical allusions,” and more modern pieces, some of which make us feel “as if we could breathe the free air of nature, or feel the reality of the mountain breath and the valley’s shade,” he could easily be referring to the contrasting paintings of Cole and Church. Cole was to some extent a Humboldtian painter, as Emerson was a Humboldtian philosopher, but his depiction of nature was generally subservient to his social message.. In stark contrast… Church’s vegetation, like Humboldt’s, stood primarily for itself rather than for any divine blessing or reprimand.”

With his increasing recognition and popularity, a commission from a wealthy patron allowed Cole to paint The Course of Empire, a series of five large paintings made from 1833 to 1836 that depicted a single location across centuries, as a civilization conquers and overwhelms nature, then collapses. Cole wrote about the painting, explaining that “the philosophy of my subject is drawn from the history of the past, wherein we see how nations have risen from the savage state to that of power and glory, and then fallen and become extinct.” The message of The Course of Empire was a warning against America’s unbridled expansion and the materialism of his time, and a depressing vision for the future. Cole became an outspoken critic of unrestrained development and a proponent of nature conservation, writing that “I cannot but express my sorrow that the beauty of such landscapes are quickly passing away, the ravages of the axe are daily increasing. They cut down the forests with a wantonness for which there is no excuse, and leave the herbless rocks to in the glimmer in the burning sun.”

A cultural anthropologist or environmental historian would tell us that we can’t really understand our own reaction to climate change and other environmental issues we face now, in the Anthropocene – the geological age of human dominance of Planet Earth – without understanding the roots of our cultural, societal reactions in the middle of the 19th Century. The artists, scientists, and writers of that day looked over the abyss of the Anthropocene, into which we have now plunged. Barbara Novak explains how the Hudson River School painters saw their American Eden being threatened by human enterprise and greed: “The new significance of nature and the development of landscape painting coincided paradoxically with the relentless destruction of the wilderness in the early nineteenth century. The ravages of man on nature were a repeated concern in artist’s writing, and the symbol of attack was usually “the axe,” cutting into nature’s pristine – and thus godly – state.” 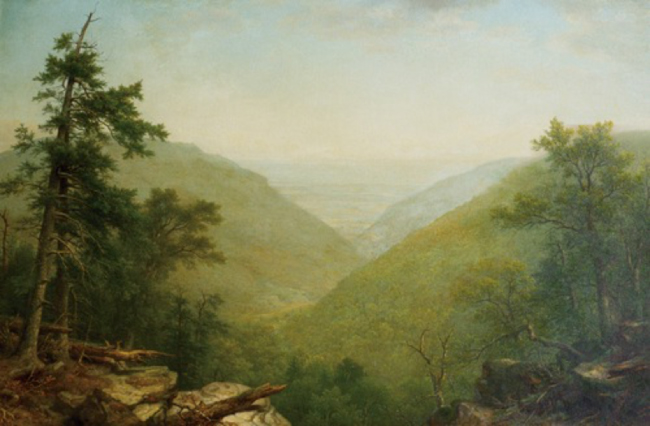 Kaatarskill Clove, a dramatic valley cutting eastward to the Hudson Valley from the plateau ridge of the Catskills, painted by Thomas Cole and his fellow Hudson River School artist and friend Asher B. Durand, was subjected to clear-cut logging in the early 19th Century. Their artistic portrayal of the scene eventually led to the protection of this landscape as part of the Catskill Park and Forest Preserve. We stopped at a small parking area along New York State Route 23A and photographed the scene that my companions had sketched and painted from almost this same location from the 1830s to 1860s.

From the parking area we hiked a mile up a rocky trail to a viewpoint for Kaaterskill Falls, which they had often sketched and painted. 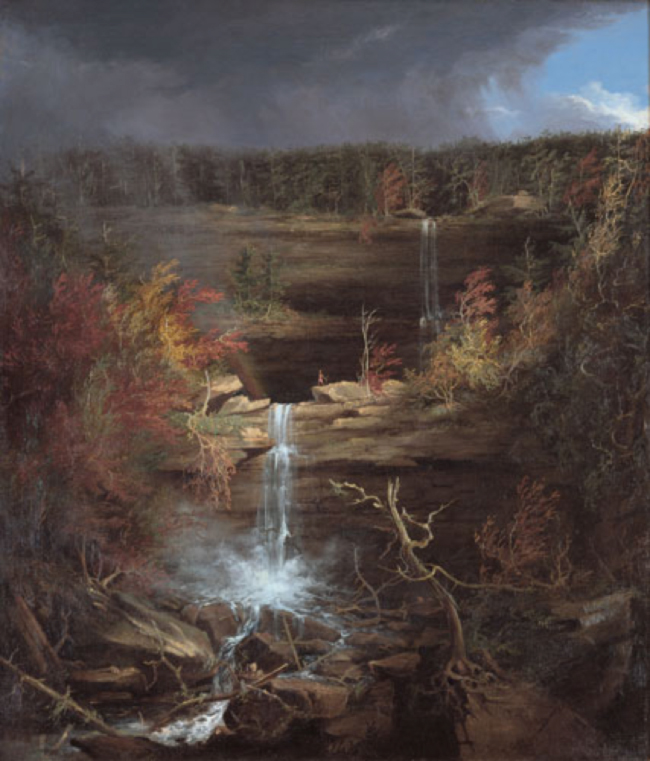 Falls of the Kaaterskill. Thomas Cole. 1826. 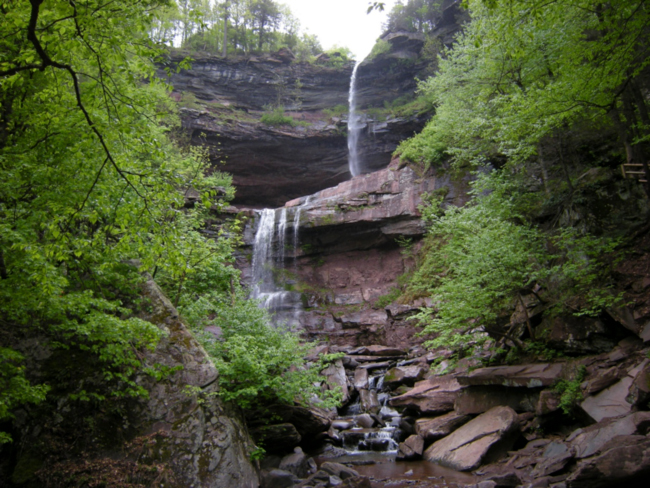 From a trailhead on North Lake, we walked to the rim of the Catskills escarpment that drops dramatically to the Hudson Valley to the east, and clambered over rocks and through pines and hemlocks toward the high viewpoint from which Cole and Church had drawn much inspiration. 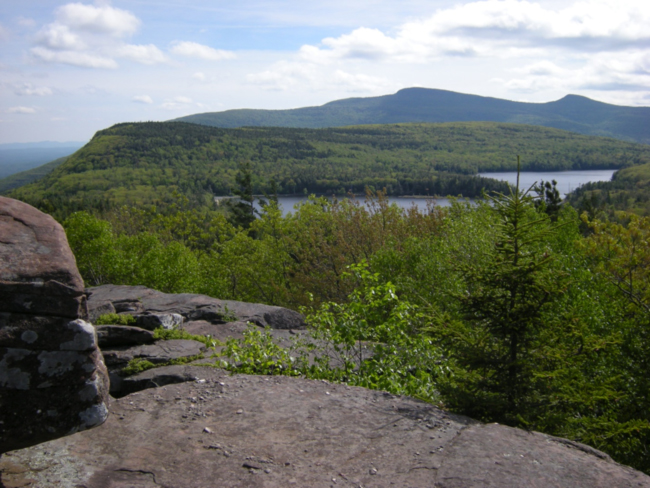 A view of the two lakes and site of the former Mountain House, Catskill Mountains afternoon. May 2015. 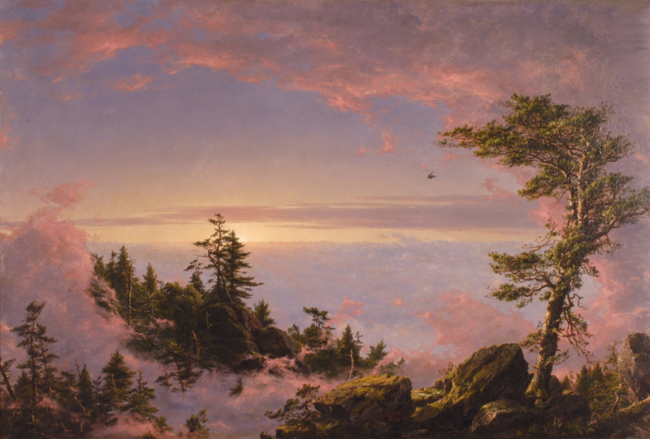 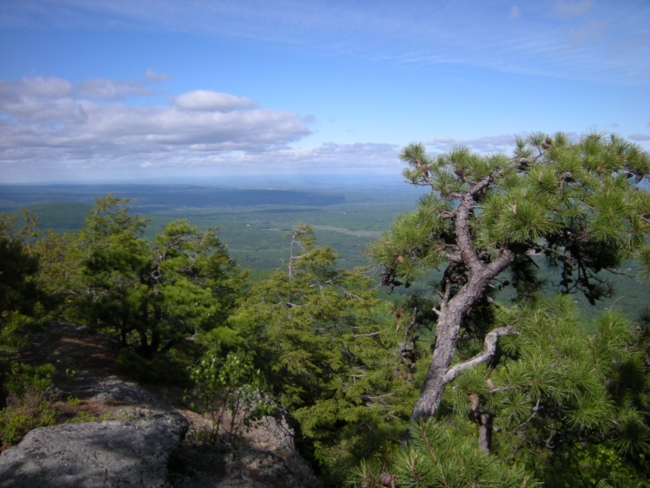 Afternoon view of the Hudson Valley from the Catskill ridge. May 2015.

What all of the artists of the Hudson River School did “say” in their works was that they found the world they lived in wondrous and beautiful. And through that message, which resonated strongly with the popular culture of their era, they were able to influence the values and behavior of the wider society in which they painted, and to influence the future of nature conservation in America.

Spending a couple of days wandering with them along the Hudson and west up Catskill Creek, through Kaaterskill Clove, under the falls, along the lakes, and up the ridges, I saw that it is, still, a wondrous and beautiful world, still luminous and transcendent. 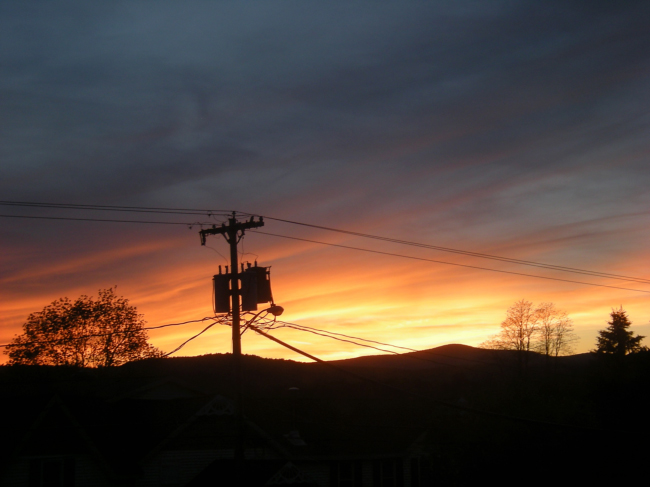