July 12th, 2012. If they are blood relatives, the connection is distant, and untraceable.  But they are some of my intellectual and philosophical ancestors, and this past weekend I made a pilgrimage of sorts, to Philadelphia, to visit the old haunts of the Bartrams, John and William, and John James Audubon.  It has only slowly dawned on me now, days later, how profound this short journey was for me. 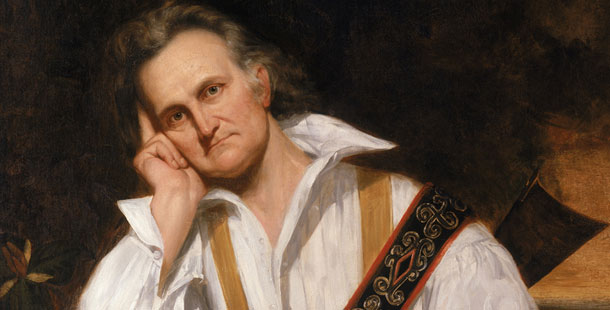 Bear with me, if you will. And if you can, please try to think of this as a 21st Century “blog” that wandered off into a time warp, and became more of a 19th Century essay.  Ah well, that was part of the journey.

On Sunday, July 8th, it was finally starting to show signs of cooling down, after a record-setting ten-day heat wave that scorched the eastern U.S.  The day was overcast and hazy.  We followed the directions to Bartram’s Garden, printed from their website.  Along Paschall Avenue the neighborhood was pure African-American. The old rowhouses were rundown, half were boarded up. Turning off of Lindbergh Boulevard we suddenly plunged down a small road into a wooded enclave along the Schuylkill River. To the west, giant power pylons stalked across the meadow toward the highrise skyline of the Philadelphia financial district across the river. To the east, the smokestacks of a sprawling Sunoco refinery rose in the haze, one tower flaring an orange plume of flames.

We entered Bartram’s Garden, and parked along the road behind the old house.  Time seemed to warp around us, and we stepped into the arcadian farm of Quaker naturalists John Bartram and his son William.  John Bartram (1699-1777), a third-generation Pennsylvania Quaker, purchased this property in 1728. Today his “garden,” the first botanical garden in North America, had a rough, ramshackle air, which seemed to make stepping into this time warp even easier on this hot and hazy afternoon. 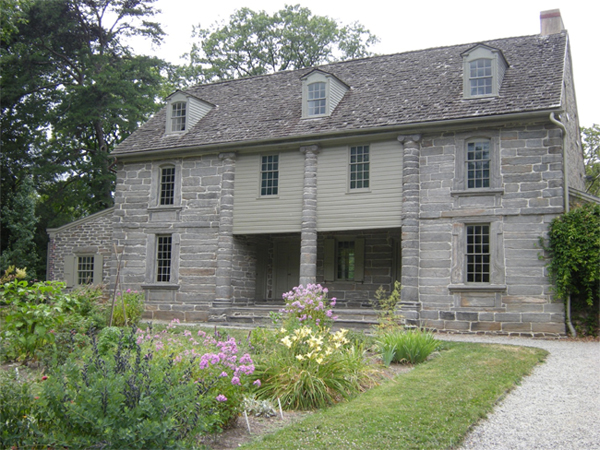 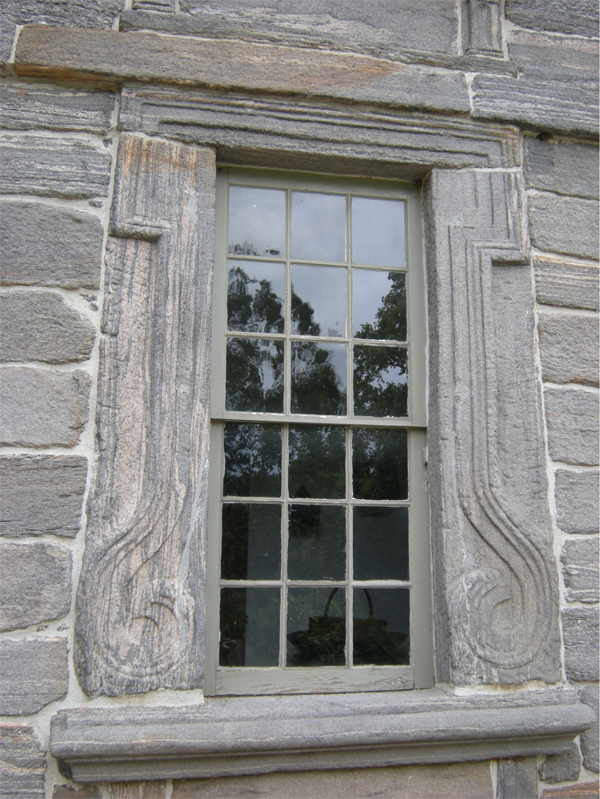 John Bartram, Quaker, farmer, botanist, horticulturalist, and stonemason, was also the co-founder, with Benjamin Franklin, of the American Philosophical Society.  Founded in 1743, the American Philosophical Society was dedicated to “natural philosophy.”  Its mission was “to pursue equally all philosophical Experiments that let Light into the Nature of Things, tend to increase the Power of Man over Matter, and multiply the Conveniencies or Pleasures of Life.”  Here at Bartram’s Garden, under an arbor, John and his son William entertained friends and discussed natural philosophy: Benjamin Franklin, George Washington, Thomas Jefferson, John and John Quincy Adams, Charles Willson Peale, and most of the other notable men and women of the era.

William also surely visited here with the young German explorer and naturalist Alexander von Humboldt (1769-1859), who travelled to Philadelphia as a guest of the American Philosophical Society, and President Thomas Jefferson himself, in the spring of 1804. Von Humboldt was on his way home to Europe after a five-year exploration of the Orinoco and Amazon, the Andes, and Mexico.  Charles Willson Peale, the prolific portrait painter who made portraits of all the famous men of his day, and opened a museum of natural history, accompanied Humboldt on stagecoach trips between Philadelphia and Washington to visit Jefferson in the White House, and other prominent men and women of the nation’s capital.  Dolly Madison wrote that all the women of Washington were enamored with the handsome and loquacious Humboldt, fresh from his exotic Latin American adventures.

Von Humboldt has been described by Aaron Sachs, in his insightful historical analysis The Humboldt Current, as “the first ecologist,” because of his foundational view of the interconnectedness of all phenomena on Earth.  Humboldt’s influence permeated American thought and art in the middle of the 19th Century, through Henry David Thoreau, Ralph Waldo Emerson, John Muir, Herman Melville, Edgar Allen Poe, Frederic Church, and others. 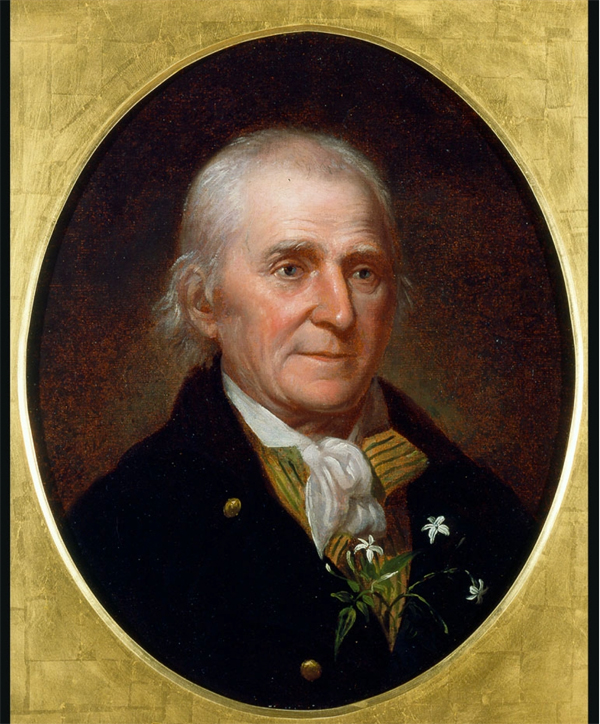 In some ways William Bartram came out of a similar historical, cultural, and political context as Alexander von Humboldt, roughly a generation earlier.  “Armed with the knowledge gained through the empiricism of his father’s world, William Bartram came to represent the spirit of a new age. In his book Travels, William achieved a balance between the 18th Century standard of objectivity and science and the new emphasis on the subjective and spiritual which was to characterize the Romantic movement of the early 19th Century.  Travels not only had a great influence on contemporary European writers including Coleridge, Wordsworth, and Chateaubriand, but also later generations of naturalist writers like Henry Thoreau of Walden Pond and John Muir, founder of the Sierra Club.”  (So said an informational sign at Bartram’s Garden) The book referred to above, Travels through North and South Carolina, Georgia, East and West Florida, was William Bartram’s reflections on a four-year journey that began in 1773 through the southeastern colonies and southern territories of the emerging United States.

In a trip to the colony of Georgia in 1765, William and his father John had observed “severall very curious shrubs” growing along the Altamaha River. In the travels described in his book, William collected seeds from these small trees.  He later described them as a new species, in a new monotypic genus in the tea family (Theaceae), which was named Franklinia altamaha, in Linnean scientific nomenclature, for his family friend Benjamin Franklin and the river where they grew. (The Bartrams were correspondents with the famous Swedish botanist Peter Kalm, protégé of Carl Linneaus, founder of the modern scientific system of plant taxonomy, and they described and named many species of American plants.) Seeds of this species were grown at Bartram’s Garden, and the first Franklinia in Philadelphia flowered in 1781. Franklinia altamaha was a local endemic only found in an area of two or three acres near Fort Barrington, Georgia, and it became extinct in the wild in 1803.  The species now survives only in cultivation, descended from the plants grown from seed at Bartram’s Garden. 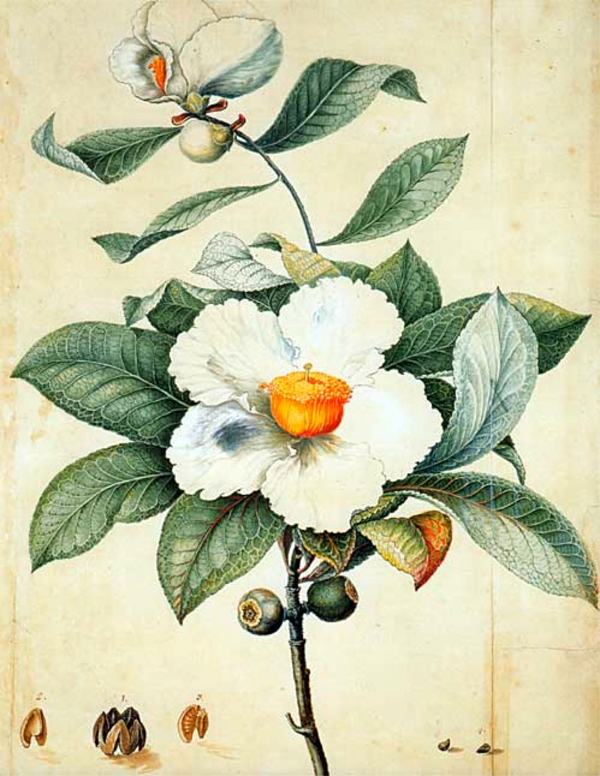 The Bartrams also described, collected, and propagated Hydrangea quercifolia, the Oakleaf Hydrangea, another native of the southeastern US.  For several years I had admired this ornamental plant, found in a few plantings in my town, for its seasonal virtues: showy sprays of white blossoms in June, fading to pink and then copper as the summer advances, and then an autumn show of scarlet leaves, some bleeding to wine and rich purple. Finally two years ago I planted five of these plants along my front fence, and I am always reminded of the Bartrams as I enjoy their seasonal show.  I smiled when I saw big hedges of Hydrangea quercifolia at Bartram’s Garden. Probably the plants in my yard are their descendants. 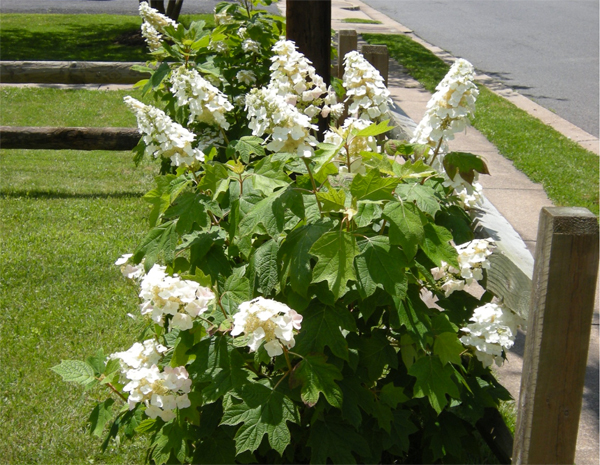 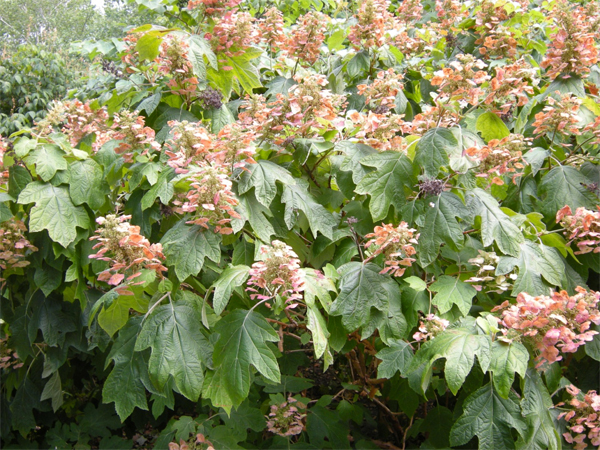 Another American naturalist ancestor, John James Audubon (1785–1851), lived for three of his most formative young years, from 1803 to 1806, at Mill Grove, about 25 miles northwest from Bartram’s Garden, up the Schuylkill River near Valley Forge. The historic house at Mill Grove is now maintained as a museum by the National Audubon Society.  Audubon was sent here at the age of 18 by his father, a French sea captain and owner of a plantation in Haiti, to oversee the family’s lead mine on the property.  The young Audubon instead roamed the nearby woods and fields from dawn to dusk, reveling in the wild, unfamiliar nature of this new world, observing, hunting, fishing, and collecting specimens.  Audubon was a gifted marksman, shooting birds that he then skinned and stuffed.  He was also an artist, and he sketched those specimens. His sketches are the beginning of the first “field guide” to North American birds.  In the days before binoculars and spotting scopes, the only way to get an accurate view of the details of a bird’s anatomy and plumage was to hold a dead one in your hand, and drawing or painting those specimens was the best way to communicate that knowledge, and beauty, to a wider audience.

Audubon’s bedroom at Mill Grove was described by the younger brother of Lucy Bakewell, the daughter of the owner of the neighboring farm who would become his wife, as virtual museum of natural history, filled with bird’s eggs, stuffed birds and squirrels, rock specimens, and bird drawings.  It was here at Mill Grove that young Audubon found his passion and avocation, leading finally, after long struggle, to his lasting contribution as the founder of ornithology and avian conservation in America. 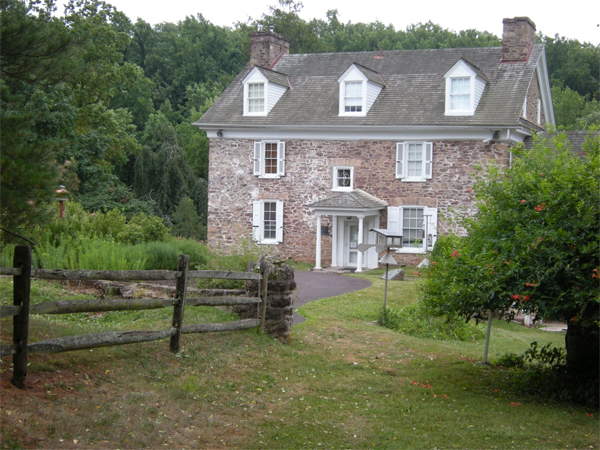 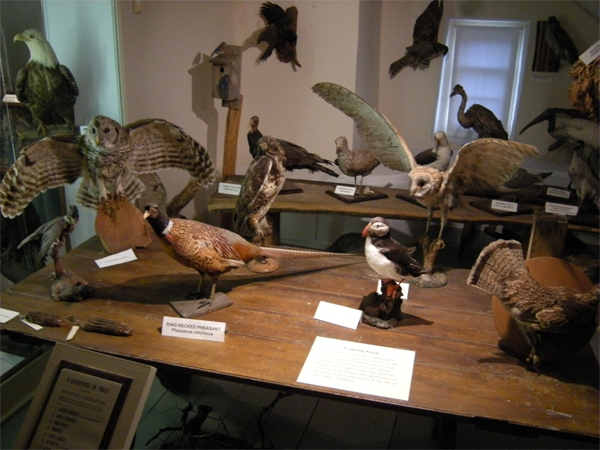 One of the plates in Audubon’s masterwork, Birds of America, shows the Black Oystercatcher, Haematopus bachmani.  The Black Oystercatcher is the only oystercatcher of the Pacific Coast, and for several young summers I watched them hunting on intertidal rocks in Middle Cove, Cape Arago, Oregon, when I was doing fieldwork for my Ph.D. thesis.  Audubon’s ecologically-tuned eye portrayed this species as a predator of limpets. A decade later I returned to Cape Arago to conduct a study of camouflage in Lottia digitalis, the limpet species pictured by Audubon in the Black Oystercatcher plate in Birds of America.  This common intertidal limpet exhibits a striking color polymorphism – some limpets have snowy white shells, and others brown shells. The white-shelled limpets are found attached to the white plates of goose barnacles, while the brown-shelled limpets rest on the rocks around the barnacle colonies.  The obvious evolutionary-ecological explanation for this camouflage dimorphism was that a visually-hunting predator was selecting for shell color.  The prime suspect: Haematopus bachmani, the Black Oystercatcher. 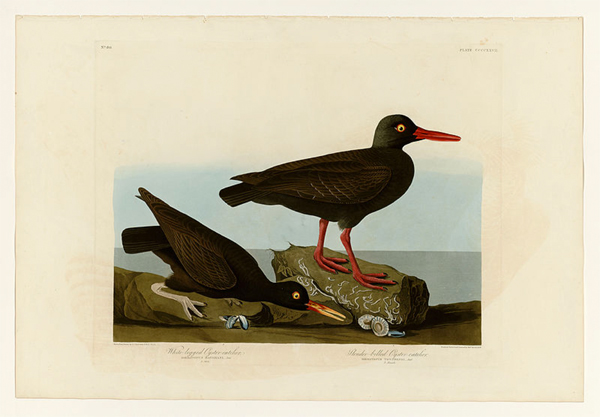 My interest went beyond the predator-prey relationship.  I wondered whether the limpets knew, or cared, where they rested when not feeding.  It seemed logical that they would know and care, if evolution had anything to do with it.  So I asked them.  How do you ask a limpet where it wants to be?  Simply move it to the opposite habitat, wait, and watch what happens.  After a few low tide cycles in Middle Cove, moving brown limpets to white barnacles, and white limpets to brown rocks, the answer was unambiguous.  Virtually all of the white-shelled limpets crawled back onto the white barnacles, and the brown-shelled limpets crawled back onto the brown rocks.  I imagine them feeling irritated at the curious naturalist who disrupted their lives to ask this obvious question. My answer: It was not my fault! Audubon made me do it!

These curious natural philosophers and naturalist-artists of Philadelphia, John and William Bartram and John James Audubon, were some of the first ecologists, in the Humboldtian tradition. They spent their lives seeking patterns of interconnection in the natural world around them. The more I learn about how these men of the turn of the 19th Century saw the world, the more I think how much we need their worldview now.  Their vision of a world of interconnection and interdependence suggests the possibility of a harmonious relationship between humans and nature. Their inclination to embrace both the rational and emotional – head and heart, science and art – suggests a balance that is missing today in our self-centered, greed-stricken, politically polarized society.  It’s time for the time warp to wrap around, and connect us with the revolutionary ecological worldview that was taking root in our own backyard just after the American Revolution.

An ecological worldview is, after all, all about time-warp: everything is connected to everything else, in time and in space. We still have a lot to learn from these revolutionary early-ecologist ancestors.