20 September 2012. A large crowd of people were gathered in Saja Village when we arrived at about 9 AM on another sunny morning. Our silver 4X4 Ford “Everest” looked as out of place among the thatched huts as a snowcapped Himalayan peak or a shiny spacecraft from another planet. We’d followed a track from the main road through forest and cassava fields to get here, seldom traveled by vehicles with four wheels, but mainly by motorbikes, bicycles, and feet. 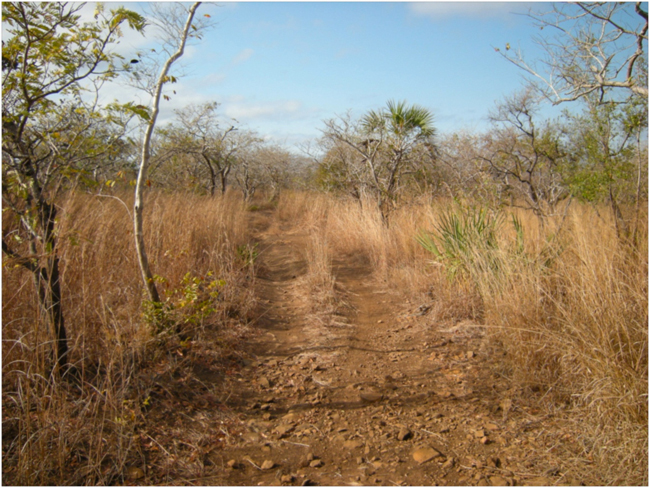 The road to Saja Village

The people were enthusiastic, greeting us with handshakes and smiles. They were here for an orientation meeting, to learn about becoming a demonstration village for a “Farmer Field School” in the CARE-WWF Primeiras and Segundas Program. 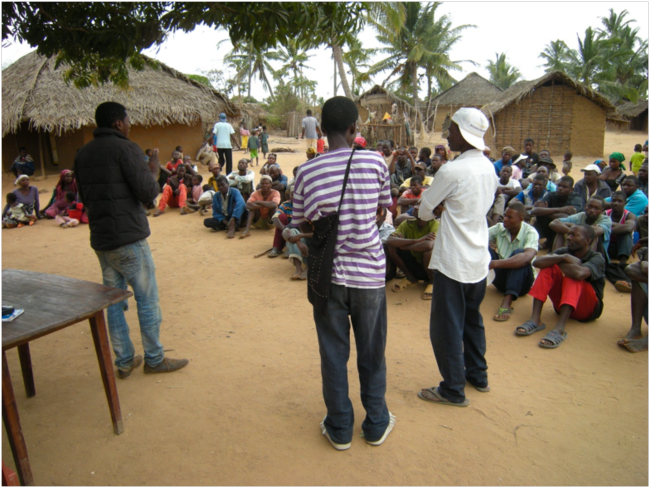 The Farmer Field School will demonstrate new farming techniques and improved crop varieties that can help these subsistence farmers grow more food on the land they have already cleared, and maintain its soil fertility, so that they won’t have to continue the traditional, endless cycle of “slash and burn” agriculture.

So-called “slash and burn” farming may sound bad, and it has a bad reputation recently. But in fact, this traditional farming system is based in sound ecology, and was sustainable for many millennia, until overwhelmed recently by rapid human population growth. In traditional swidden, or “slash and burn,” agriculture, farmers cut a field into forest, and burn the branches and wood from the forest trees. The stored nutrients from the trees and branches provide the nutrients – the fertilizer – for the crops planted in the generally nutrient-poor soils where this type of farming developed. After a period of time, maybe five or ten years, the crops grown in these burned forest fields used up the nutrients, yields dropped, and farmers moved on, clearing new fields into forest, and letting forest recolonize and overtake the old fields. For millennia in the coastal and miombo forests of southeastern Africa this was a sustainable system, with both forest and human communities in balance. 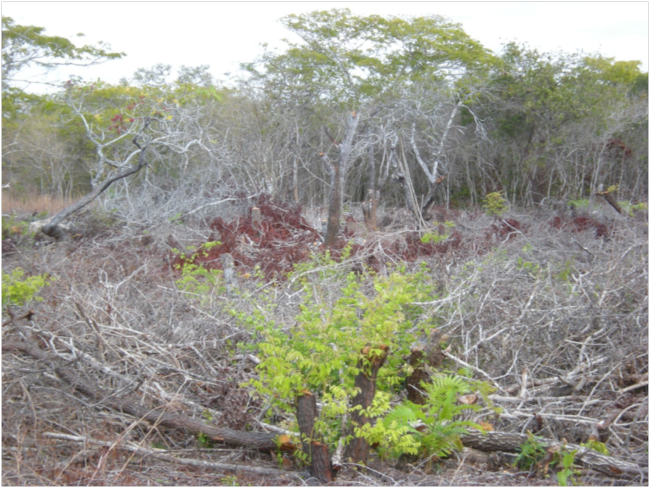 Trees cut for a new cassava field in Potone Forest, drying before being burned.

Now, however, rapid population growth has increased the demand for food, and subsistence farmers clear more and more forest, at a rate far faster than the forest can grow back and re-store the nutrients needed for another cycle of farming. Something has to give to maintain a balance. Population growth has to return to zero, its normal state throughout most of human history. And agricultural and forest lands have to stabilize – conversion of forest to farms has to stop. That means that each farm has to produce as much food as ever, or even more, by maintaining or increasing the fertility and productivity of that piece of land. 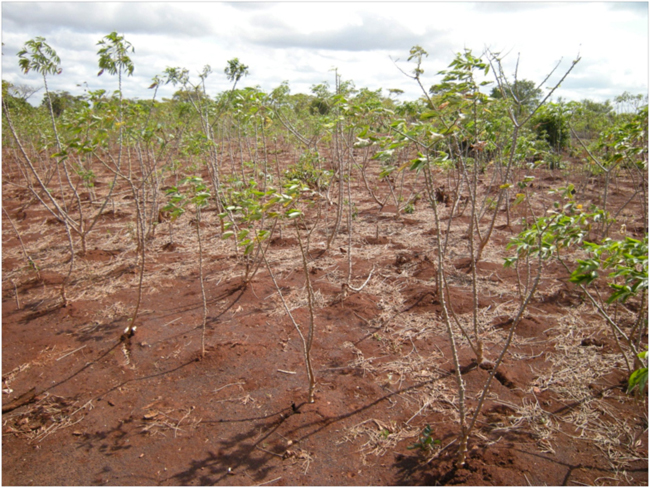 Fortunately, there are many techniques for doing exactly that. These days the suite of such techniques is being called “conservation agriculture,” and includes: composting agricultural residues and returning them to the soil; minimum tillage; cover crops including nutrient-fixing legumes; tree crops of fruits and nuts, such as the ubiquitous local cashew; crop diversification and rotation; pest, disease, and drought resistant varieties of crops; integrated pest management; and no burning of fields, or nearby forest. Some of these practices have precedents in traditional African agriculture, but many are new, because they were not needed when swidden agriculture was in balance with nature, and worked.

Thus the need for Farmer Field Schools to teach villages like Saja these new techniques and introduce improved crop varieties. In these Farmer Field Schools, we see the face of effective biodiversity conservation in a poor country like Mozambique: feed people and conserve forest at the same time. And what better marriage of experience and missions could there be than an alliance between CARE and WWF to facilitate this new “look” at blending the old challenges of conservation and human development?

The meeting took place under and around a big tree in the middle of the village. The CARE-WWF team that discussed the problems and solutions with Saja residents was experienced, and the level of enthusiasm was high. At the end of the meeting, an election was held to select the farmer whose farm would receive support to become a demonstration of these new techniques. 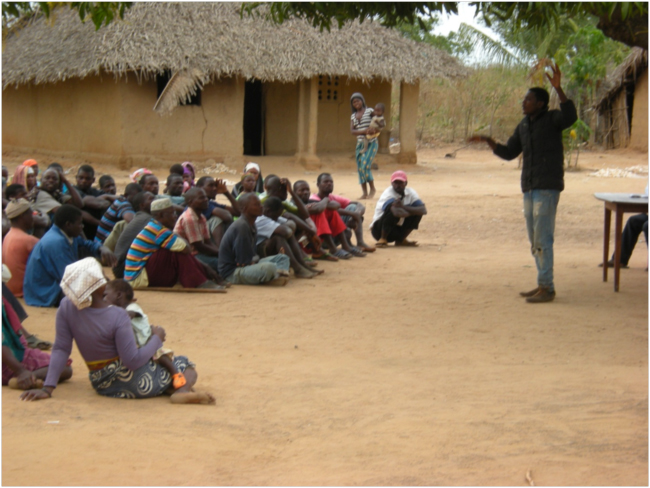 Saja is a neighbor village of Nametoria, the village we had visited earlier in the middle of the Potone Forest. Potone – pronounced with three syllables, and sometimes also spelled “Potoni” or “Patone” – is a relatively large and intact remnant of Mozambique’s unique and threatened coastal forest ecosystem. Coastal forests have been largely destroyed, fragmented, and degraded not only in Mozambique but in Kenya and Tanzania as well. For that reason, Potone was of special interest for biodiversity conservation to WWF, and the Primeiras and Segundas Program. Potone is considered a sacred area by local residents, and the diversity of its native plants attracts traditional healers who collect plants for their pharmacopeia. Saja is on the edge of Potone, and its agricultural expansion cuts into sacred forest, shrinking it from the outside in. 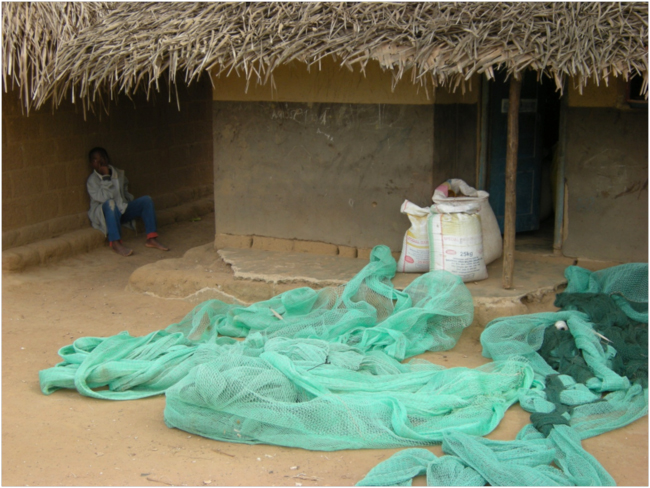 Like most of these coastal villages, Saja sits at the ecotone between land and sea. Backed by coastal forest, where staple crops like cassava grow, it is only a short walk to the mangroves that fringe the estuaries that finger into the land here. Saja’s farmers are also fishers, and as we wandered through the village we saw piles of fishing nets side by side with piles of drying cassava. Cassava is starch, calories only; fish are protein. People need both, and especially children. We noticed too many toddlers here with the telltale distended bellies from a lack of protein in their diets, which will stunt both their physical and mental potential – and that of the country of Mozambique as a whole. 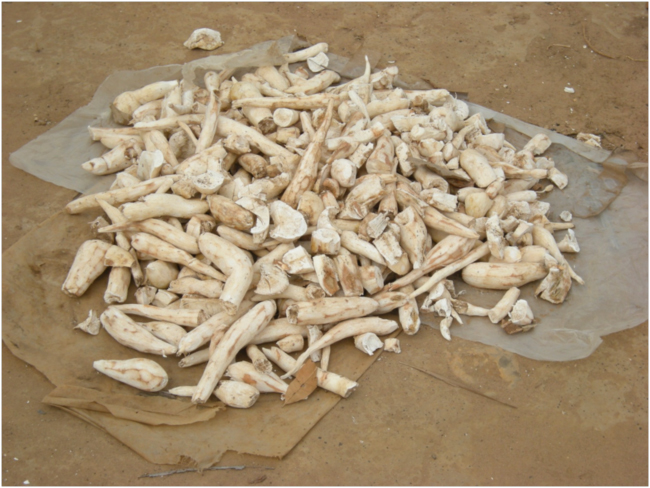 The CARE-WWF Primeiras and Segundas Program recognizes the need to maintain the linkage between the land and sea here, to support these villages of fishing farmers – farming fishermen and women – in an integrated way. To support them in a way that recognizes and supports the ecological integration of their livelihoods. 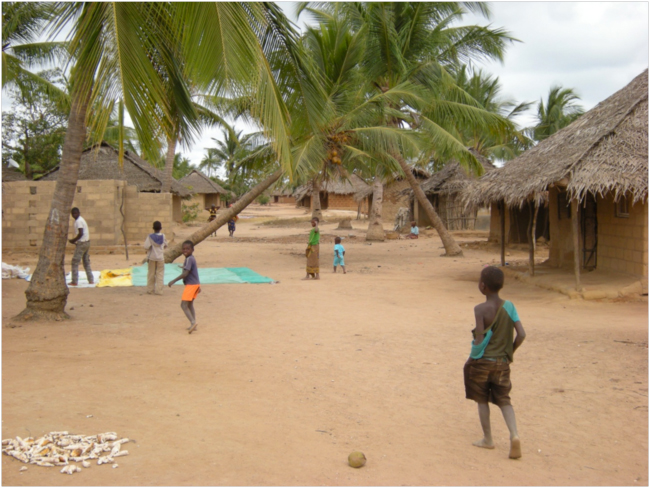 After shaking hands again with a substantial part of the village population, we drove back through the cassava fields, past new fields being cleared into the Potone Forest, and back to the main road to return to Angoche. There is hope here, yes. And hope needs a lot of help, it doesn’t just happen. There is a lot of work to be done here to help these villages once again come into balance with the environment that supports them. As we drove away from this meeting, taking our out-of-place Ford Everest out of this humble village, we felt humble, and honored, to have seen and understood something more about the hope and the struggle at work here in Saja.