Friday 21 September 2012.  We sat in the shade of an old spreading mango tree in Namutoria Village and talked with community for an hour or so.  About thirty community members, and five forest guards in green army-style uniforms sat on roots of the huge tree, or on the ground.  We – Sabino, of the CARE-WWF Primeras and Segundas Program; Felisbela, a member of our assessment team; and I – the guests of honor, had plastic chairs. I counted 21 men and eight women.  Five of the women were older, probably the mothers of the three young women who sat together, one nursing a baby; they looked to me to be maybe 14 or 15 years old.  Under a nearby cashew tree a gang of kids, three, four, or five years old, played, some swinging on a little swing hung from a branch, some drumming on a metal pot while others danced to the rhythm, some wondering in and out of the group to come over and consult with their mothers.

Felisbela presided over the meeting, asking the questions we wanted to answer. The people were very shy and reticent.  Most looked uncomfortable, or even blank, almost drugged even, like their thoughts were far away, or maybe really pissed off.  I wasn’t sure I could read the expressions on these faces across this cultural gulf, but that’s how I would have interpreted their meaning in a town meeting in my country. Two men did most of the talking. One turned out to be the young village headman, and the other older man accompanied us later to the sacred forest; he must have been the village liaison with the traditional spiritual leaders in the area.  Felisbela deliberately called on some of the women to speak.  One, who also later came with us to the forest, laid out the village’s priorities with an angry expression: water, school, health clinic.  Several other speakers echoed those needs.

This village is located nearly in the middle of the Potoni Forest – sometimes also spelled “Potone” or “Patone” – a relatively large and intact remnant of Mozambique’s coastal forest ecosystem. Coastal forests have been largely destroyed, fragmented, and degraded not only in Mozambique but in Kenya and Tanzania as well. For that reason, Potoni was of special interest for biodiversity conservation to the Primeras and Segundas Program. Felisbela asked: What about problems with forest conservation?  Poaching? No, no… Oh, well, maybe a little bushmeat, but only for the pot, for local consumption, nothing to worry about. Charcoal making? No. The only “problem” with the environment, conservation, or biodiversity that was mentioned by the community was uncontrolled fires, which start during the dry season from people clearing fields or smoking out bees to get honey, and sometimes burn huts and villages.

This village seemed about as desperate and poor as any I have ever seen. I really couldn’t help but wonder why they stay here, in the middle of this forest, where in the dry season the nearest well is about three miles away.  No wonder their number-one priority is “water.” But why would they settle here, so far from water, in the first place?

When the meeting was over, three of the older women and the older man who had spoken a lot, apparently the ceremonial leaders of the village, all climbed into the 4X4 Ford “Everest” with us, me driving. Yikes! The last time I drove on African bush roads was at least ten years ago! But as soon as I started driving that morning in Angoche, on the left side as they do here, it all came back and felt perfectly natural, a flashback to my year in Zimbabwe in the late 90’s when I drove all over the country and on many a rough road.

We drove back toward Angoche, and stopped at the camp of the community forest guards where we’d stopped earlier on the way to the village.  I hadn’t noticed then, but off to the side of the camp was a fence made of palm leaf mats surrounding a large, spreading, now leafless tree with yellowish bark.  Flags of red cloth were posted around the enclosure, and a gate through the fence was closed with a faded yellow cloth.  This was the tomb of Tumanya, a “royal ancestor” of the ancient past. The tree, which they called “nruale,” supposedly sprouted from Tumanya’s navel three days after he was buried here. Nruale means “the ones who came,” they said. None of my botanical contacts, including one who works at Kew, the Royal Botanic Gardens in London, and is a specialist in the flora of this region of Africa, could identify this tree from my description or photos – and I didn’t think to collect possible evidence of its scientific identity in the form of seeds or fruits.

Before leaving Angoche, Sabino had directed us to a small general store on a side street where we bought a meter of white cloth, a meter of red cloth, a box of matches, four candles, and a packet of incense sticks.  These were to be our offerings to Tumanya, the presiding spirit of Potoni Forest. 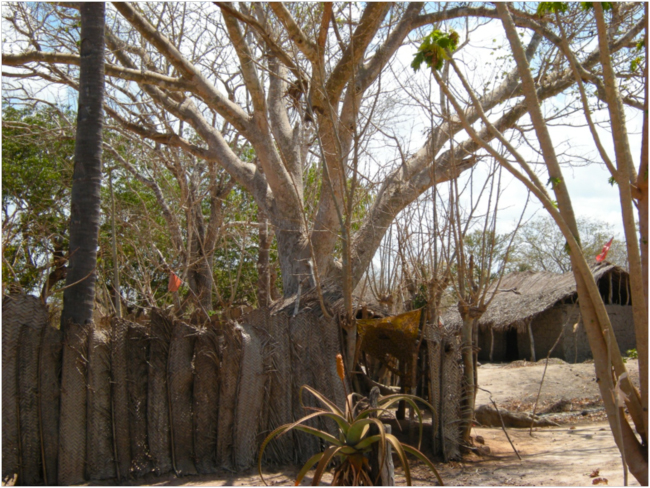 We took off our shoes, passed through the gate, and crawled toward the buttressed roots under curtains of red and white cloths, like the ones we had brought. The women began to sing and shake rattles, and every so often the man blew a whistle, letting the spirit of Tumanya know we were approaching.  The smell of incense wafted among the cloths as we sat in the sand.

The shrine at Tumanya’s tree, our gifts of cloth on the ground 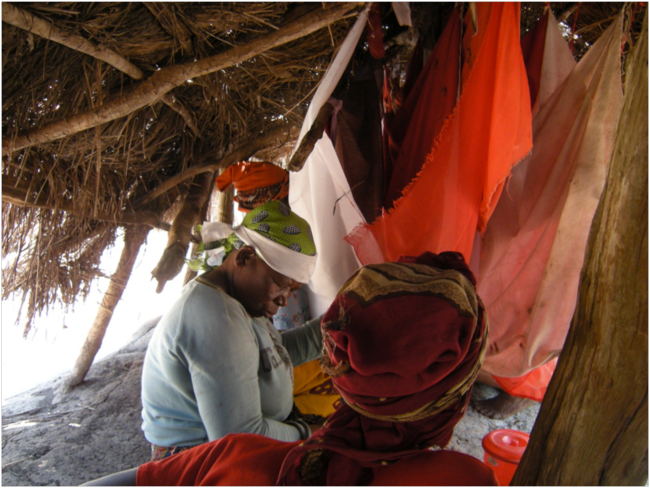 Announcing our presence at Tumanya’s tree

After this greeting to the spirit, we all jumped back in the Ford 4×4 and Sabino pointed to a footpath leading from the back of the camp into the tall dry elephant grass among the leafless trees of the dry-season miombo forest.  I could see two faint tracks of flattened grass on either side of the sandy path, where another vehicle had driven sometime in the last month or two.  I drove slowly, enjoying this view of undisturbed forest, with bigger and more diverse trees than we had seen before, bright and dry in the morning sunshine. 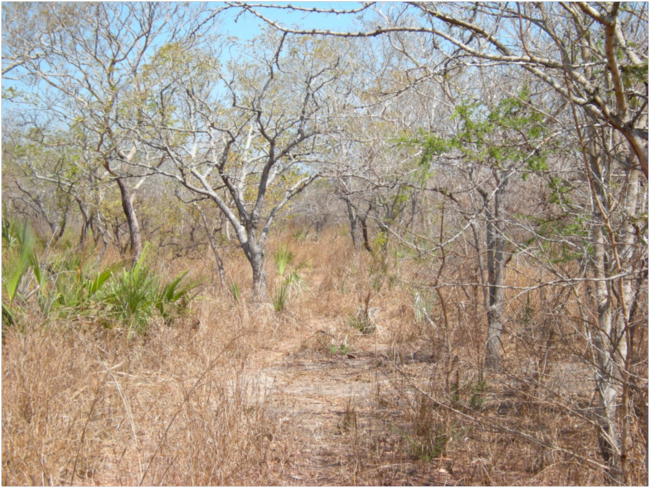 The road to Tumanya’s sacred place

After about a kilometer, we could see a red cloth flag in a small clearing ahead, and the ceremonial crew ordered me to stop here. 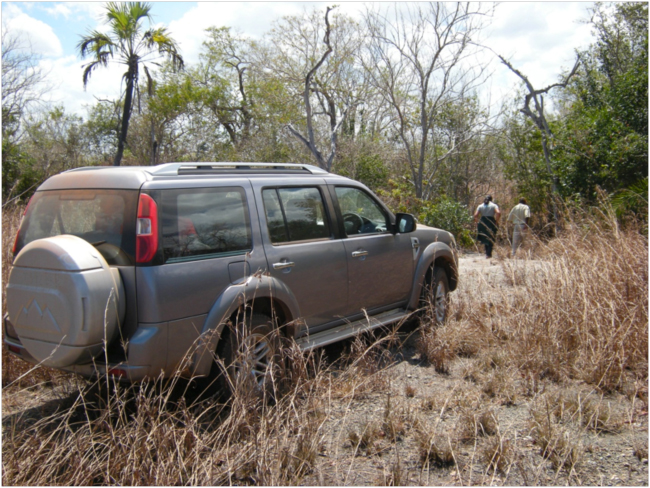 We all piled out, took off our shoes once again by the flag, and they led the way along a path of burning hot sand that wound counterclockwise around a giant termite mound covered with vines, bushes, and small trees. On the far side was another fence with a gate closed by cloth, and a steep short path leading up to a dirt platform in front of a small thatched shrine room dug into the side of the termite mound. We passed under more layers of hanging cloths, where the ceremonial chorus was sitting in the sand singing, rattling, and whistling to again announce our presence to the spirit of the forest.

This time the song lasted longer, and the thin older woman in the red blouse became very agitated and began jerking – apparently going into a trance as Tumanya’s spirit possessed her. She jerked around and grabbed Sabino’s hand, which she held for a long time while the singing and ululating continued. Then she pivoted and shook my hand for half a minute, turned again and shook Felisbela’s, and then all the others present. This was the greeting from the spirit through the spirit medium.  We were, apparently, welcome here in this sacred place.

I didn’t feel a bolt of lightning or a surge of power or anything like that – just a cool, thin hand.  But the singing was repetitive and meditative; I found it calming, purging me of all other places and times.  I was right there, in that moment, my mind wandering nowhere else.  Finally another woman in the ceremonial group pushed me to a corner of the altar cave, where the man lit a stick of incense and handed it to me, indicating by gestures where to place it in the sand. Two candles were burning in the alcove, whose centerpiece was a small stone shaped somewhat like an axe head, but with a phallic appearance, wrapped in pieces of white and red cloth.  After ten or fifteen minutes of singing, the medium started coughing, and the woman who had pushed me forward started hitting her on the back with a rattle, then hugged her from behind and slowly calmed her, bringing her out of her trance. 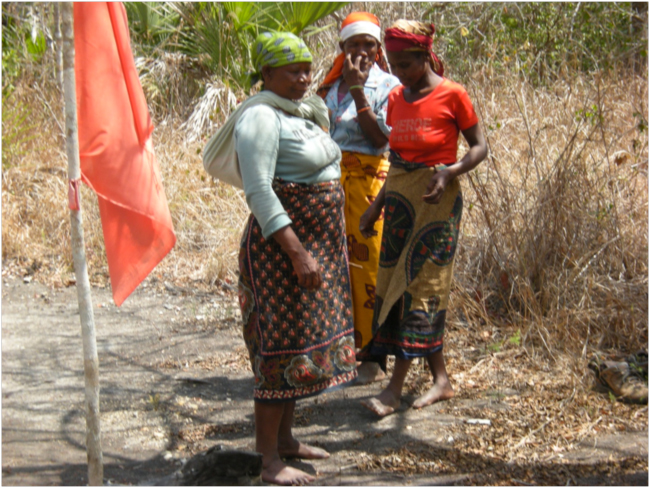 The singers to call the spirit

The ceremony over, we descended from the shrine and continued around the other side of the mound, still counterclockwise, until we reached the flag where we had left our shoes.  We climbed back in the hot 4X4, and retraced our track through the woodland.  At one point Sabino called for me to stop, and jumped out to crack off a branch of a medicinal plant. 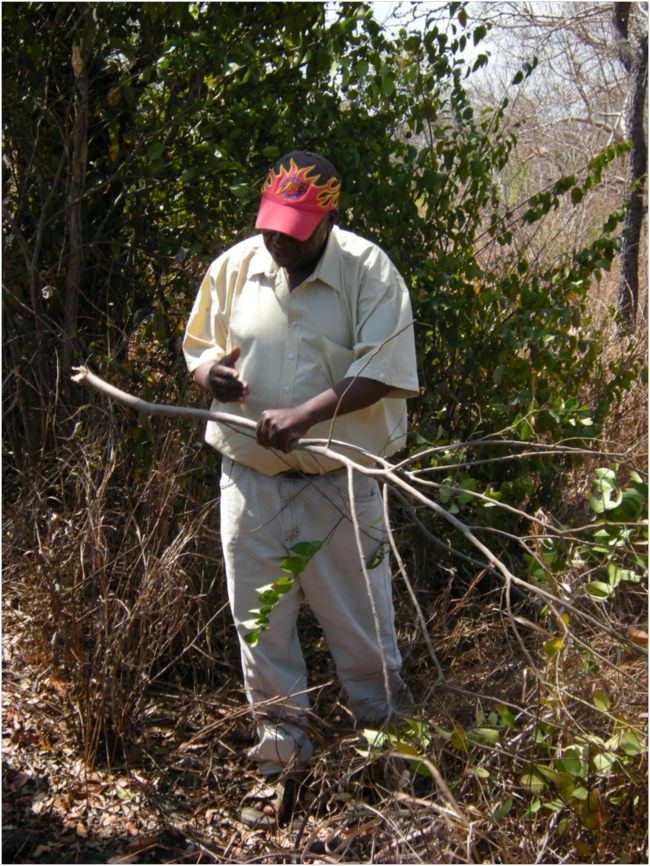 Because Potoni Forest is considered “sacred,” and protected by traditional spiritual beliefs, it is full of native plants, and is thus a well-known gathering area for traditional medicinal plants – whose efficacy may also be enhanced because of the sacredness of the forest, according to traditional healers.  This situation in Potoni was similar to the sacred forests I studied in northern Zimbabwe in 1997. In these places, conserving nature and conserving culture go hand in hand, with each supporting the other.

Some of the plants we saw for sale in the Xipamanine Market in Maputo may have come from Potoni, or other sacred forests in Mozambique, or even neighboring countries. Studies have shown that trade networks for traditional medicines can reach far across national borders.

As we drove, Felisbela was translating what our village hosts were telling her.  Back in the Portuguese days, they said, the colonists were trying to build a road from Angoche to Moma, through this sacred forest. But their machines kept breaking down, and the trees they cut in the path of the road grew back overnight. “They didn’t want to talk to Tumanya,” they said.  But finally, in frustration, they decided they would make an offering to his spirit, and build a “mosque,” a shrine, near the sacred termite mound we had visited.  After that, they said, the machines worked, and the cut trees stayed cut. 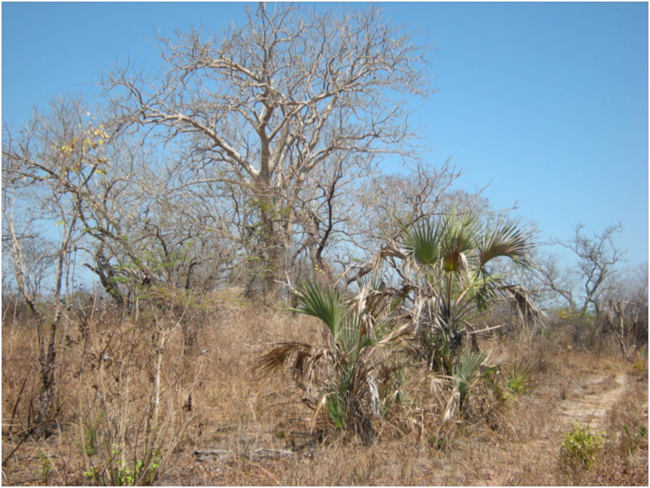 To read more about culture and conservation in Zimbabwe’s sacred forests and elsewhere in Africa, visit: