You are here: Home » Blog » Biodiversity » Searching the Black Forest for Fire Scars on Halloween

Searching the Black Forest for Fire Scars on Halloween

October 31st, 2013. In my last story I described how my dad and I found a piece of a fossil tree trunk thirty years ago with what turned out to be the first fossil fire scar ever reported or described. I went back to southeastern Utah a few weeks ago to revisit the site where we found it, in an exposure of the Petrified Forest Member of the Late Triassic Chinle Formation below the Bears Ears buttes in southeastern Utah.  Since I was in the vicinity – relatively speaking – I decided to drive a few hours on south to the Petrified Forest National Park in Arizona, where vast deposits of Triassic logs are exposed.  It is the largest collection of fossil wood found anywhere. What better place to look for more examples of fossil fire scars? 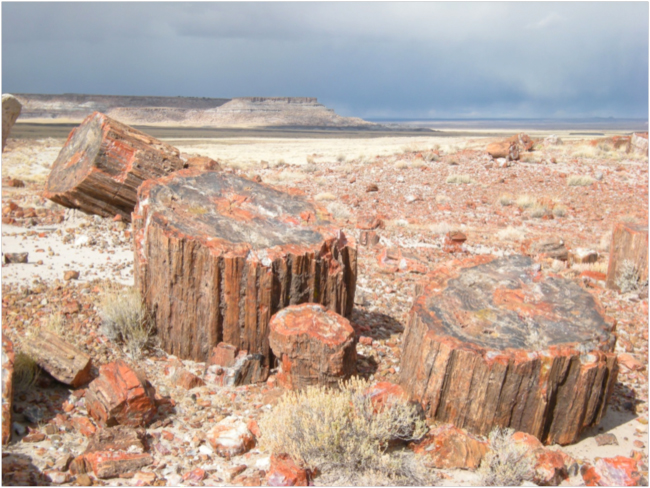 I mentioned in the previous story that I had talked to the paleontologists most familiar with fossil wood of the Petrified Forest, and found that although they had looked at thousands of petrified logs, they hadn’t noticed any potential fire scars – and wouldn’t have noticed if they saw them because they didn’t know what a fire scar looked like.  So, wandering around in the Petrified Forest searching for the telltale pattern of a fossil fire scar seemed like a worthwhile way to spend a week.  We had the full support of the park paleontologist, Bill Parker, who approved our research permit to conduct this reconnaissance and advised us on our search strategy. 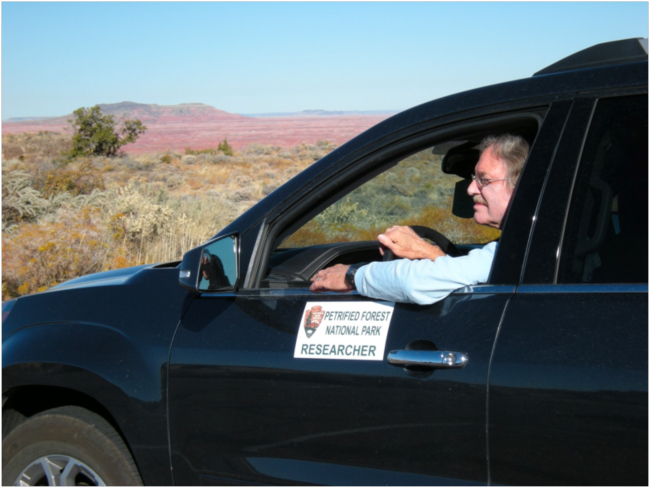 The Petrified Forest has a complex stratigraphy, exposing a range of geological layers of the Late Triassic Chinle Formation spanning more than 15 million years.  Five main “forests” – deposits of fossilized logs – are found in the park.  We started our search at the southern end, in what is called the Rainbow Forest.  The wood here is almost completely replaced with minerals, and warm colors, from mustard yellow to poppy red, predominate in this fossil-wood rainbow. In the Long Logs area east of the park museum, a historic structure built by the Civilian Conservation Corps, we wandered off-trail to the east, in search of our search-image – a fire-scar pattern on a fossil log. 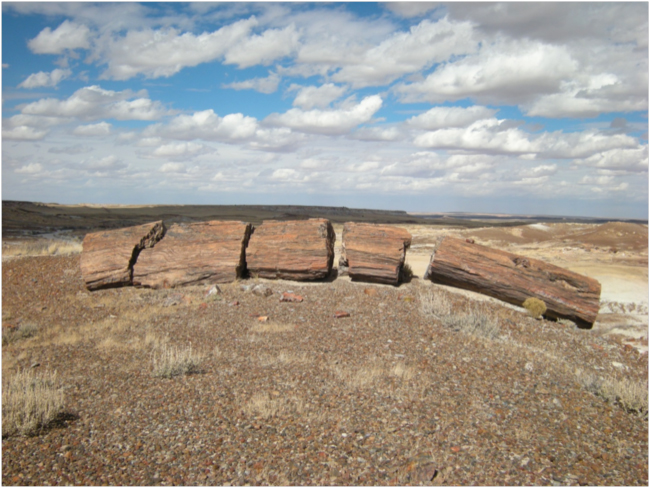 The sun was intense, but the late-October wind was sharp, and we were bundled up to keep warm.  In the first afternoon of searching in this area we managed to find two fossil logs with the “suspicious” pattern that suggested a fire scar. 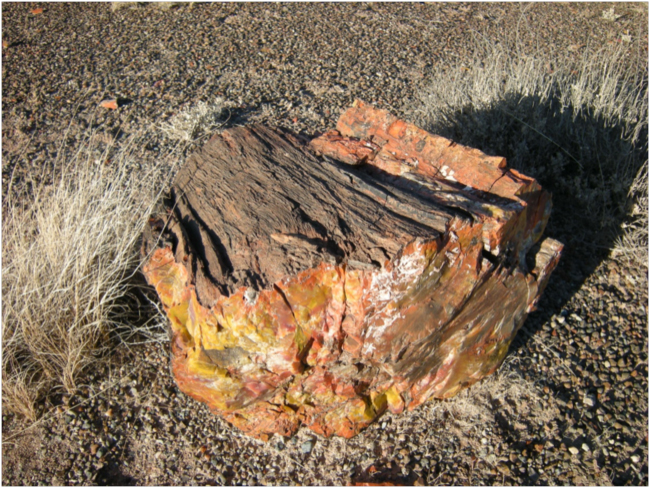 The next day we went farther north to the Crystal Forest, and there found four logs that seemed to have healing curls and scar faces.  In each case, we took multiple photographs and a reading of the location with a handheld Garmin GPS unit. 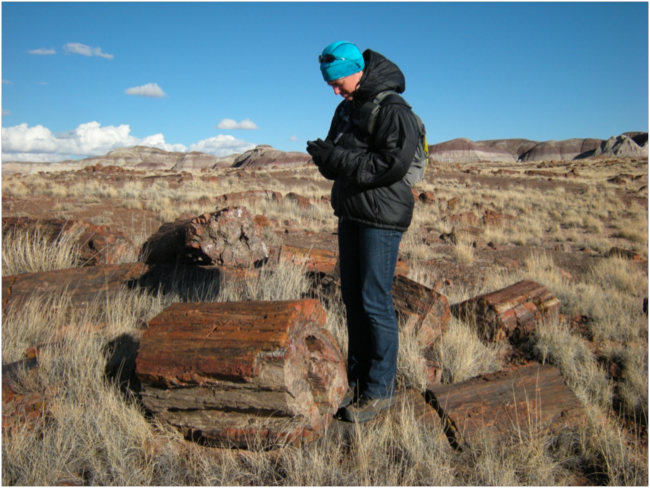 The following day we searched the Jasper Forest, still farther north, and also the log-jammed gullies in the badlands of the Blue Mesa.  We found no suspicious examples in those areas. 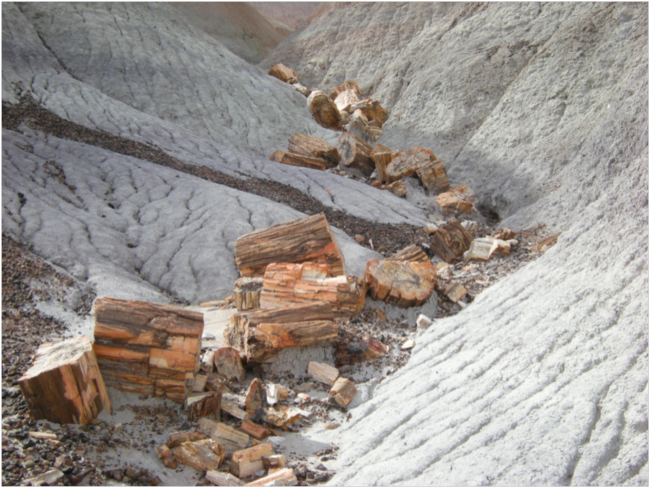 On our last day in “PEFO” – the geological shorthand for Petrified Forest – we drove to the northernmost section, and parked at the historic Painted Desert Inn. This classic Pueblo-style structure, now a national historic site, was also constructed by the Civilian Conservation Core in the late 1930s, on a point overlooking the Painted Desert.  Our destination was a few miles farther north into the foot-travel-only, “wilderness” section of the park.  We dropped steeply down off of the rim, and hiked out across the flats to Lithodendron Wash, the meandering valley of an ephemeral river whose name in Latin means “Stone Tree.”  Our destination was the Black Forest, named for the black fossil wood found there. The wind had finally died down, and it was a pleasant day for a late fall hike in the high desert. It was October 31st, Halloween.

Crossing Lithodendron Wash on the way to the Black Forest

The Black Forest is an exposure of the Petrified Forest Member of the Chinle Formation, of exactly the same age as that below the Bears Ears buttes in southeastern Utah where the fossil fire scar I’d found with my dad came from.  We were eager to see this “forest” and compare it with what we’d seen elsewhere in the park. After hiking for an hour or so we scrambled up a gully leading from the broad wash onto the top of a layer where fossil logs spanned gullies and draped across ridges.  We were in the heart of the Black Forest. 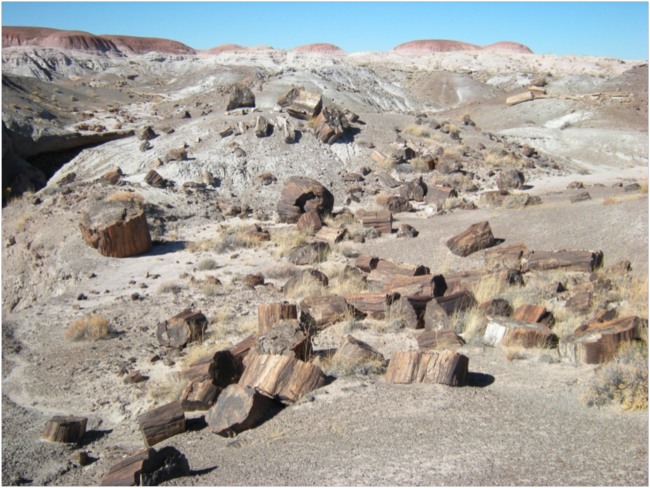 Within a few minutes Anya spotted the first probable fire scar.  Healing curls seemed to crawl around a scarface of fossil wood with a much different texture.  There were two matching pieces of a section of fossil trunk, and the pattern spanned both.

Nearby was another section of the base of an ancient tree about two feet in diameter and three feet tall, with a pattern that looked almost exactly like a modern fire scar. When we lifted the section upright, we were even more amazed.  The color of the upper part of the possible scar face had hints of amber and honey, as the resin-filled exposed xylem of modern fire scars often does, and the lower part was black and whitish, looking very much like charcoal and ash from a recent fire. But this was a stone tree, 210 million years old. 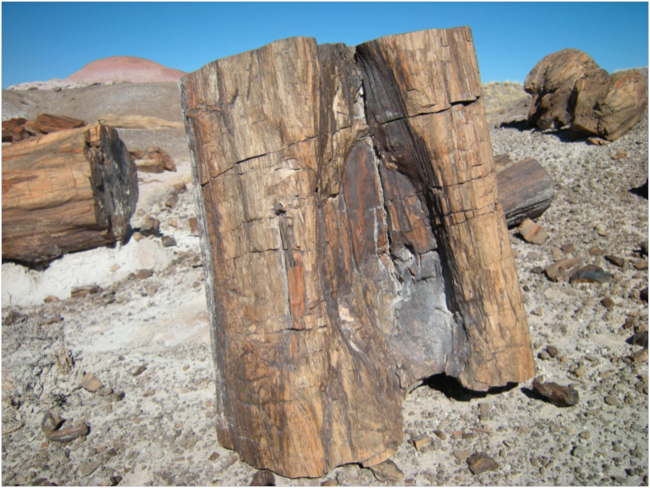 We searched for more, and only found those two examples. But we left the Black Forest convinced that we had probably found two fire scars on fossil trees here. It was a satisfying conclusion to our brief reconnaissance for more evidence that fire played an ecological and evolutionary role in forests of the Late Triassic.

For my previous post on the first reported fossil fire scar, read Fire Scar on a Triassic Tree.