You are here: Home » Blog » Education » Not Man Apart: Genealogy of an Ecological Worldview

Not Man Apart: Genealogy of an Ecological Worldview

… Integrity is wholeness,
the greatest beauty is
Organic wholeness, the wholeness of life and things, the divine beauty
of the universe. Love that, not man
Apart from that, or else you will share man’s pitiful confusions,
or drown in despair when his days darken. 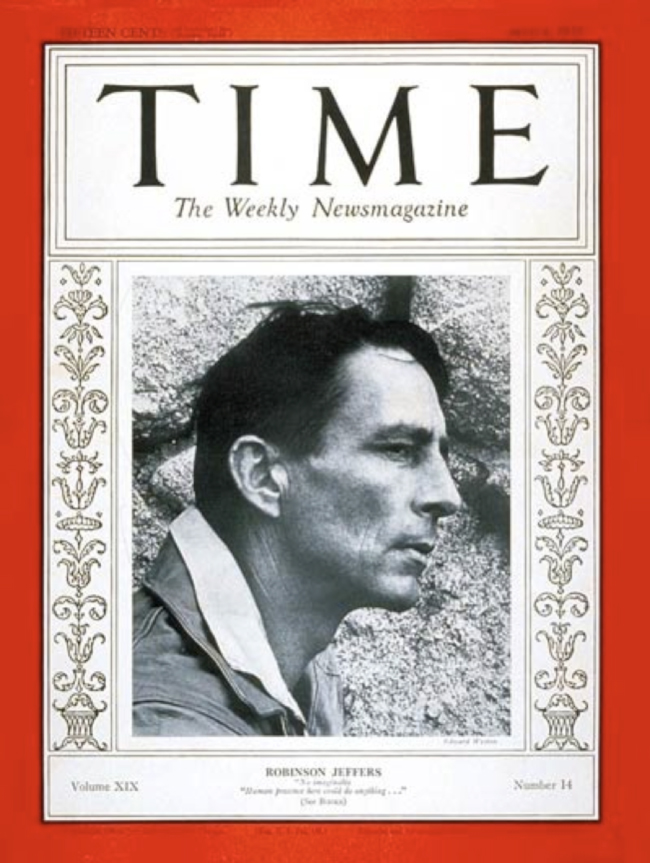 I first became aware of his phrase “not man apart” from the title of the Sierra Club’s large format book of photographs of the Big Sur Coast, with excerpts from Jeffers’s poetry, when I got my hands on the Ballentine paperback edition in 1969. About that time David Brower left the Sierra Club to found Friends of the Earth, and Not Man Apart became the title of the FOE newsletter, which I read faithfully for many years.

The point of view suggested by that phrase resonated with me. I read Jeffers’s poems while in college in California, and made many trips to the coast that had inspired him. But I never visited Tor House, his hand-built home on Carmel Point on the Monterey Peninsula, so on a recent trip to California I decided to make a pilgrimage to what he called his “inevitable place”. 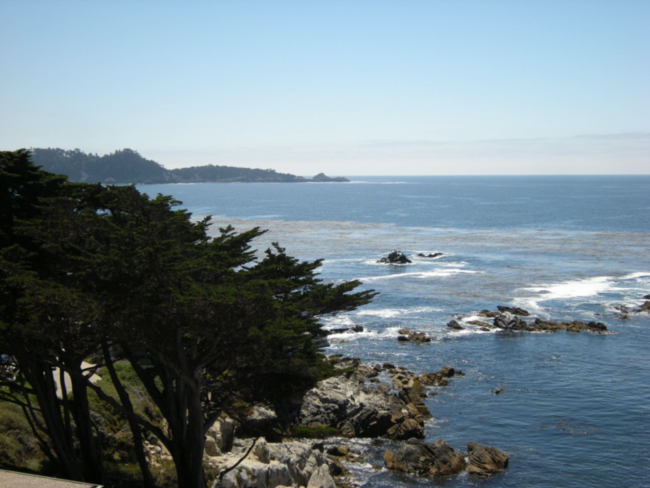 On a sunny Saturday morning we fought our way through the traffic pouring into the area for the final weekend of the Concours d’ Elegance, an elite car show for collectors of the world’s most expensive cars (Jeffers would have been dismayed, perhaps disgusted). But the streets around Tor House were quiet. The low-key tour started at 1 PM, and the only other participants were two elderly women from Oregon who had barely heard of Jeffers, but had heard that the house and grounds were worth seeing. Our loquacious tour guide was willing to elaborate endlessly on the house and its construction, on Jeffers, his wife Una, the scandal their affair and divorce from her former husband and marriage to Jeffers created, and anything else possibly of interest or somehow related. 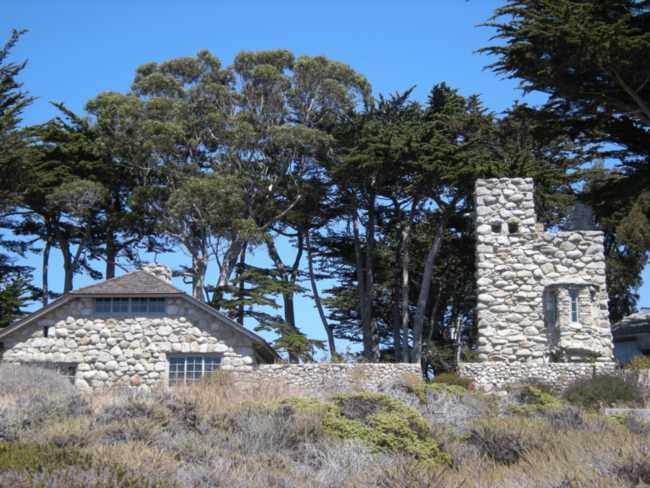 This pilgrimage to Tor House and its “Hawk Tower” was one step in some genealogical research into the sources of my ecological worldview. A number of my ecophilosophical ancestors – from John Muir to Robinson Jeffers and Edward Ricketts – were Californians. I was seeking some of my intellectual and poetic kinsmen – relatives not by blood, not sharing genes, but sharing a common way of experiencing, feeling, and understanding the world of humans and nature. Jeffers was a major influence and inspiration for his slightly younger Monterey neighbors, Ed Ricketts, and his friend John Steinbeck, so this was a natural first step in tracing the genealogy I was interested in.

Edward F. Ricketts was a polymath marine ecologist who wrote the first ecologically-oriented field guide to the Pacific intertidal zone, Between Pacific Tides. Ricketts took a new approach in this book, describing ecological communities and their physical environments, rather than working taxonomically from flatworms to chordates as academic marine biologists had done previously. Stanford University Press finally published Between Pacific Tides in 1939, after some opposition from academic reviewers. But Ricketts’s approach provided a guide to the Pacific shore for curious, non-academic, lay naturalists, and the book eventually became one of the top-selling titles in the Stanford University Press catalogue. Ed was a close friend of John Steinbeck, and Steinbeck cast Ricketts as “Doc” in his novel Cannery Row. They travelled together on a collecting expedition around Baja California and the Gulf of California in 1940, memorialized in the book Log from the Sea of Cortez. 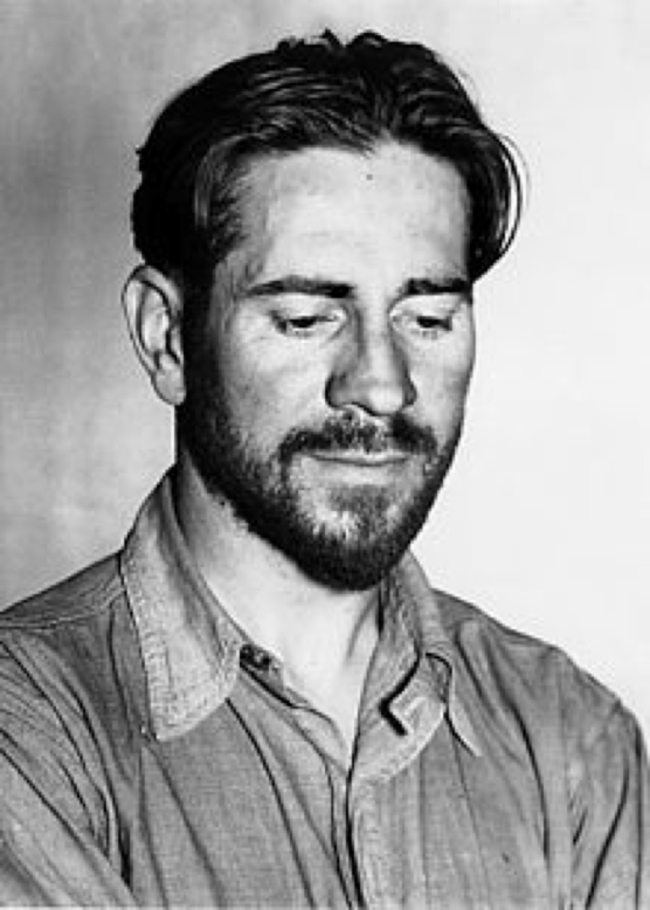 Edward F. Ricketts in 1939, the year Between Pacific Tides was published

We rushed from the tour of Tor House to a 3:30 PM tour of Ricketts Lab, now sandwiched between the Monterey Bay Aquarium and a multi-story hotel on the thronged tourist strip of Cannery Row. It’s façade is preserved pretty much as it was in Ricketts’s day, and its interior only a little changed physically. It is now owned by the City of Monterey, having been recently acquired from private owners who bought and protected it over the decades since Ed Ricketts untimely death in 1948. 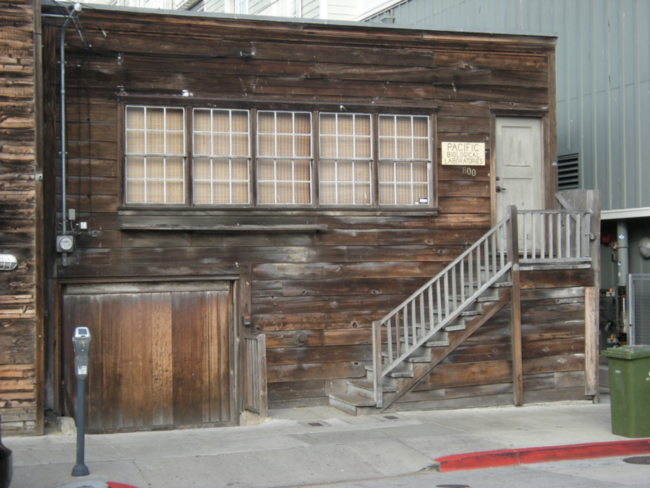 Ricketts was interested in philosophy and very serious about it. Besides his marine research, he worked hard on three philosophical essays, drafts of which he shared with friends, and which he hoped someday would be published as a book. They were finally published posthumously in 1978 in The Outer Shores, edited by Joel Hedgepeth. The titles of these three essays give a sense of Ricketts’s wide interests: “Non-teleological Thinking,” “The Philosophy of Breaking Through,” and “A Spiritual Morphology of Poetry.” It is in “The Philosophy of Breaking Through” that Ed best articulates – although in a somewhat contorted way – the influence of Jeffers on his thinking:

“But in some of Jeffer’s poems, the thing is stated clearly, with full conscious recognition, and with that exact economy of words which we associate with scientific statements:

Humanity is the mold to break away from, the crust to break through, the coal to break into fire,
The atom to be split.

These ideas use words only as a vehicle. But however unsuited to word expression, such a thing objectively seems to exist, even collectively, and it characterizes, is influenced by and influences or at least indexes a trend reflected philosophically in holism – that the whole is more than the sum of its parts, that the integration or relation of the parts is other than the separate sum of the parts.”

Thankfully for us, Steinbeck was able to take Ed’s brilliant but complicated ideas and distill them down to their pithy, poetic essence in Log from the Sea of Cortez and Cannery Row. 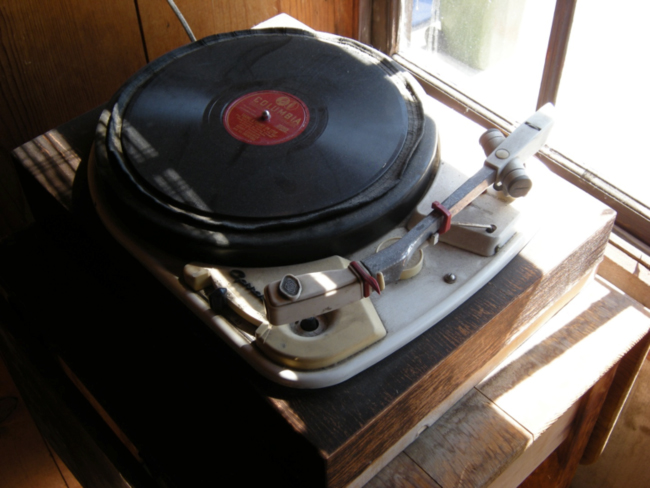 In the preface to the Double-Axe and Other Poems, published in 1948, Jeffers says that all of his previous work has been an effort “to present a certain philosophical attitude, which might be called Inhumanism, a shifting of emphasis and significance from man to not-man; the rejection of human solipsism and recognition of the transhuman magnificence. [Inhumanism is] the devaluation of human-centered illusions, the turning outward from man to what is boundlessly greater. The attitude is neither misanthropic nor pessimistic, nor irreligious.” As far as I can understand it, Jeffers’s term “inhumanism” means a non-anthropocentric worldview, a holistic worldview, what Ed Ricketts called “breaking through.”

For as long as I can remember I have always had a strongly-felt intuitive sense that the world is a wide and wondrous place, way beyond our grasp of it or influence on it, and that everything is connected to everything else. But what I wonder is how I came to have such an intuition in the first place? I hold Ed Ricketts partly to blame – but that’s a later chapter in the story. 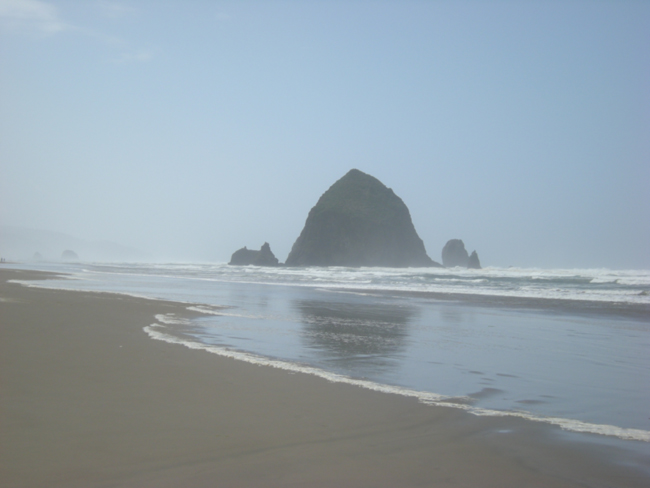 I think it started at around five years old with my grandfather, Harry Sweeney, who took me to the tidepools of Haystack Rock at Cannon Beach when we visited him in Oregon, as we did most summers as I was growing up. Those tidepools gave a glimpse into another world. It seemed to me a huge, beautiful, non-human world of scuttling hermit crabs, purple, orange, and brown sea stars, snails, camouflaged fish, and flower-like anemones. It was like a trip to another planet. Grandad had a technique for boiling, salting, and drying a few starfish we’d collect, and for the rest of the year they lined my bedroom windowsill, pentamerous radial suns shining their magical memories on me in New Mexico until the next summer. 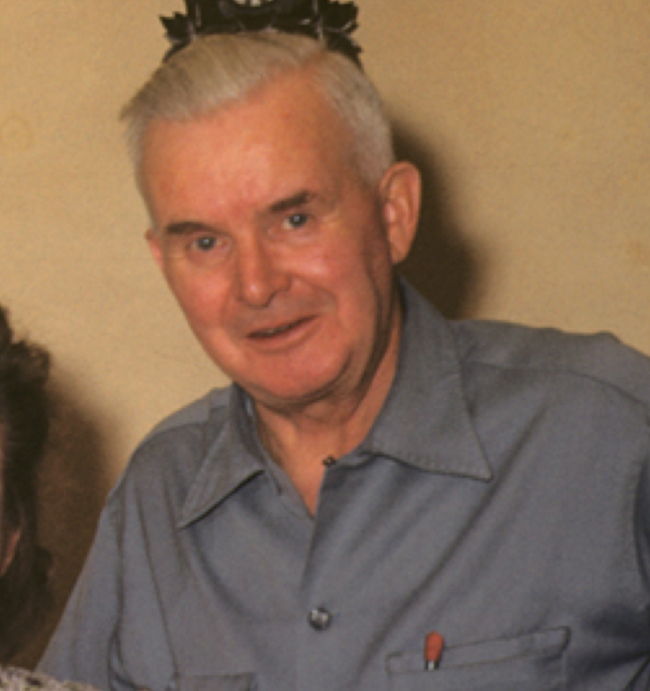 Decades later, after I got a Ph.D. in ecology, I remember blurting out, when someone asked me “Well, how did you come to be an ecologist?” that it was all because of my grandad, Cannon Beach, and the tidepools at Haystack Rock. Later I thought: Did I really mean that – that I became an ecologist because of those experiences at five years old? And when I thought harder and deeper about it, all I could come to was: Yes! 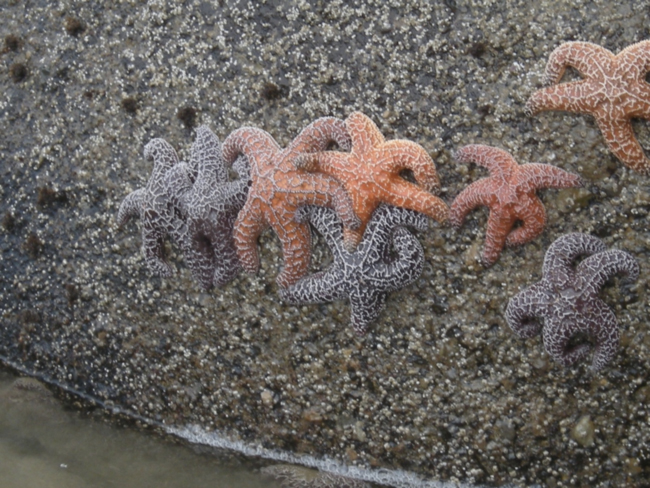 How? I was a land-locked kid growing up in northern New Mexico, but I’d visited Oregon tidepools almost every summer, and one summer of my high school years my Portland relatives sent me an announcement about a marine science camp sponsored by the Oregon Museum of Science and Industry, on the coast in Charleston, on Coos Bay. I applied, was accepted, corresponded with the director, and asked him what I should do to get ready for camp. He suggested reading Between Pacific Tides. The librarian at the Los Alamos Library dutifully ordered the book through interlibrary loan, perplexed, I’m sure, about why I would want such an obscure title, although I don’t remember her treating me like I was crazy. It arrived from somewhere, and I read it from cover to cover. The poetic, Latin scientific names of dozens of obscure intertidal creatures I’d never seen imbedded themselves in my brain: Diaulula sandiegensis, Hermissenda crassicornis, Pisaster ochraceus, Pollicipes polymerus, Acmaea digitalis, Anthopleura xanthogrammica, Strongylocentrotus purpuratus. I saw them all in the bright cold tidepools the following summer. I therefore hold Ricketts partly to blame for leading me toward my later doctoral research on one of those species, Tegula funebralis, the black turban snail.

A common theme running through the thought of Jeffers and Ricketts, and their ecophilosophical ancestors and descendants, is “transcendence.” They all were seeking a worldview that puts humans into nature, into an ecological context.

Starting with Alexander von Humboldt (1769-1859) the emerging science of the day was giving thoughtful people a roadmap to a non-anthropocentric, non-theistic worldview – a vision of how to give up the idea of a God, and his biblically-ordained, human-centered Universe. Of course, Galileo and other early scientists had already started the process centuries earlier, meeting their own resistance from The Church.

In Volume I of Cosmos, published in 1845, Humboldt wrote: “In considering the study of physical phenomena…, we find its noblest and most important result to be a knowledge of the chain of connection, by which all natural forces are linked together, and made mutually dependent on each other… Nature considered rationally, that is to say, submitted to the process of thought, is a unity in diversity of phenomena; a harmony, blending together all created things, however dissimilar in form and attributes; one great whole animated by the breath of life.” Aaron Sachs, in his far-reaching work on the influence of Humboldt, The Humboldt Current, says: “What Humboldt wanted his listeners and readers to worship was not whatever force might have been responsible for the cosmos, but the cosmos itself, the beautiful whole that could not exist without each of its parts, the overall community of which human beings were members.”

Ralph Waldo Emerson, Henry David Thoreau, and John Muir inherited and expanded Humboldtian ideas. In My First Summer in the Sierra, published in 1911, Muir wrote: “When we try to pick out anything by itself, we find it hitched to everything else in the universe.” I have always depended on that quotation as one of the best expressions of a systems view of the world, the holistic, Humboldtian, “greater than the sum of the parts” view that Ricketts referred to as “breaking through”. 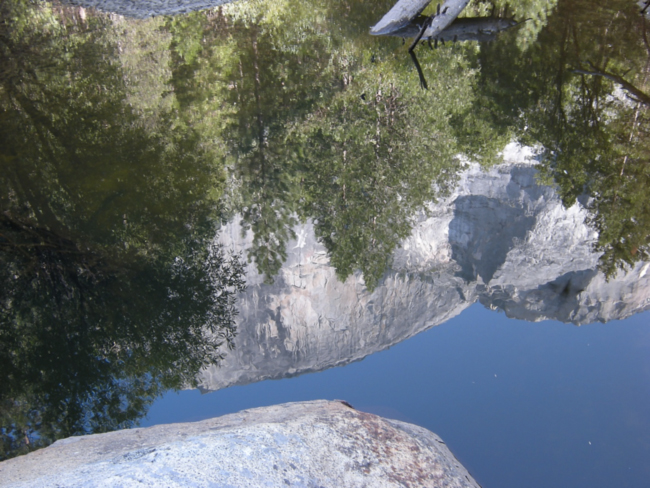