After a week of rushing from meeting to meeting in Belgrade, talking with government officials, scientists, and non-governmental organizations about the country’s plans for using renewable energy, using energy more efficiently, managing forests, and integrating economically and politically with Europe, I was eager to escape the bustle of the city and put my feet on some leafy ground in a Serbian forest.  I finally had the chance.  Leaving “Beograd” – which translates as the “White City” – on a grey, overcast morning, we drove southwest toward Mt. Avala, a prominent hill about twenty kilometers from the city.

Novi Beograd, “New Belgrade,” looking across the Sava River from the Kalemegdan Fortress

Avala has been a “protected area” in some form or another since 1859, when Prince Miloš Obrenović of Serbia decreed it a “monument of nature” and ordered it to be fenced.  This early conservation effort is noteworthy, given that in the U.S., Yosemite Valley was only set aside by the U.S. Congress as a state park in 1864, and Yosemite National Park was authorized in a large area surrounding the valley in 1890. Mt. Avala was declared a national park in 1936, but in 1946 its status was reduced to a “public property of general benefit” and placed under direct management of the Government of Serbia.  More than 70% of the area is now protected forest, managed by Srbijasume, the State Forest Management Enterprise. 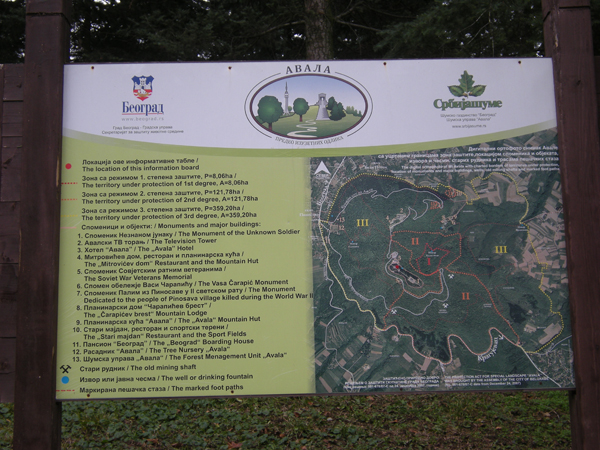 When we arrived at the top of the mountain, after winding up the narrow road through the forest, we looked around for information to orient us to the trails that would take us into the protected forest zones.  A sign provided a basic map, and a rough translation from Serbian to English, but it wasn’t really enough to get oriented.  Our semi-English-speaking driver, Borko, suggested that we buy a ticket and take the elevator to the observation platform of the newly rebuilt tower of Radio Television Serbia, near the top of the mountain, from which we could get a 360-degree, bird’s-eye view, and orient ourselves visually to the whole area.  This tower was bombed and destroyed in 1999 during the NATO campaign against Serbia during the Milošević era, and rebuilt and reopened in 2010. We paid our dinars and zoomed up in the fast elevator to the viewing platform, where the windchill from a strong wind encouraged us to figure out our hiking plan quickly.

Space-age elevator platform at the base of the tower 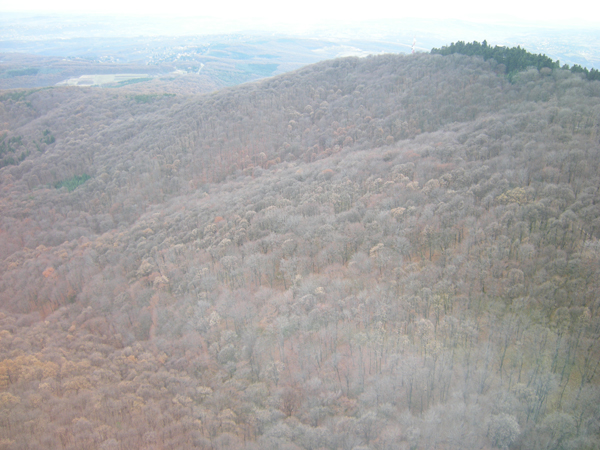 The core area of protected forest spread out below us, and below it we could see the red tile roof of the “Mountaineer’s House,” Čarapićev Brest, a restaurant. Glimpses of the trails that we had seen on the map could be seen winding through the now leafless forest, and one of those trails, we knew, started at Čarapićev Brest.  Our plan was set.  We drove there, and warmed up with world-class cappuccino, sitting by a blazing fire in a big fireplace.  The fire was surrounded by a contraption of welded tubes, connected to copper pipes, which captured the heat from the fire in a water-filled radiator system, and carried it to normal-looking radiators elsewhere in the restaurant.  This was my first glimpse of the importance – and ingenuity – of wood heating in Serbia. The importance of wood fuel for heating homes and public buildings in Serbia was something I had been discussing in meeting after meeting all week in Belgrade. And here I was, warming up before a hike in a protected forest, in front of a glorious, glowing fire!  This was my idea of “hands-on” research! 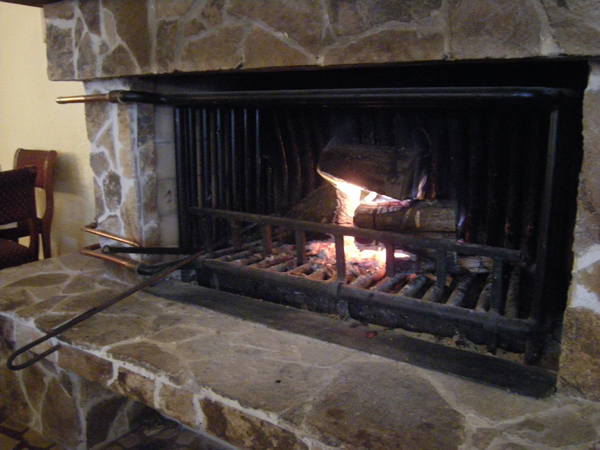 After warming up we set out on a steep trail from the restaurant through a relatively young forest of mixed oaks. There were three species here: Sessile Oak (Quercus petraea), Turkey Oak (Quercus cerris), and Hungarian Oak (Quercus frainetto). 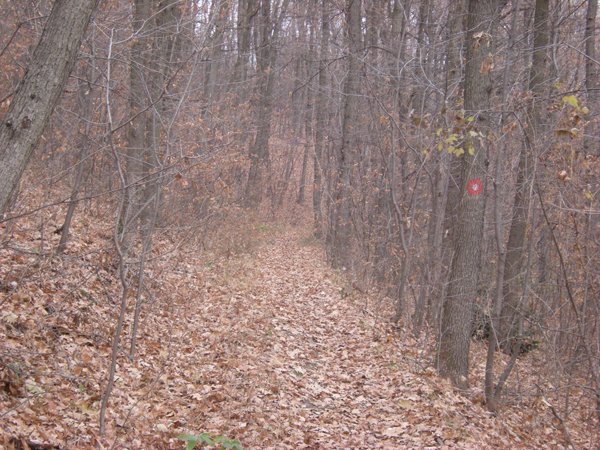 The trail climbed steeply to the top of Mt. Avala, passing under the new TV transmission tower, and dropped down again into the core protected zone of mature, mixed-species forest. 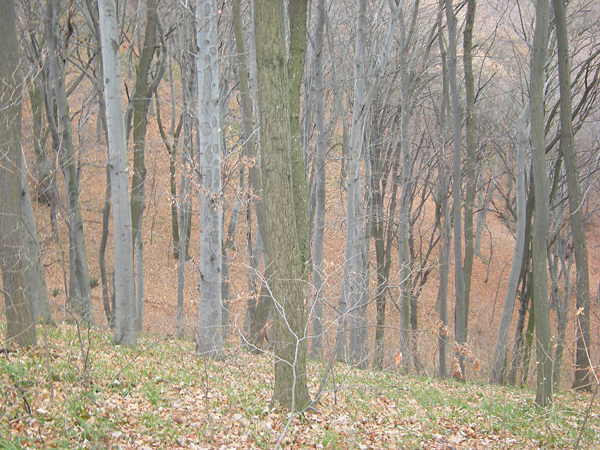 We started to notice the marked trees here – beeches with clear, white-numbers on their smooth, grey trunks.  Forest scientists were studying growth rates of this forest.  The trees were of medium age, and widely spaced; the stand was open, and there were few young trees. Although this was a mixed-species forest, it was not obviously a mixed-aged forest, and I wondered how natural it was, really.  Maybe some natural factor was missing here that would create the conditions for natural regeneration of the mix of species in this type of forest? 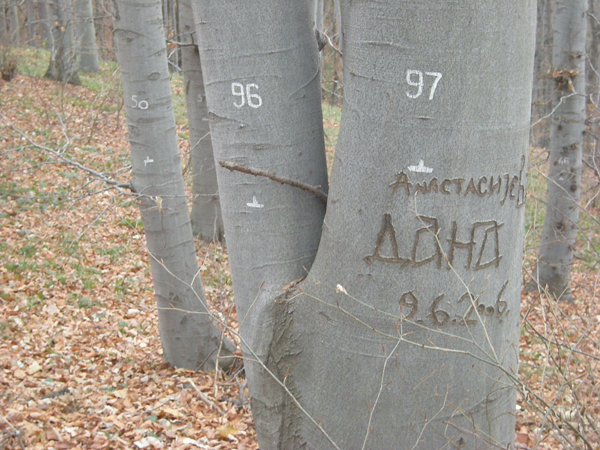 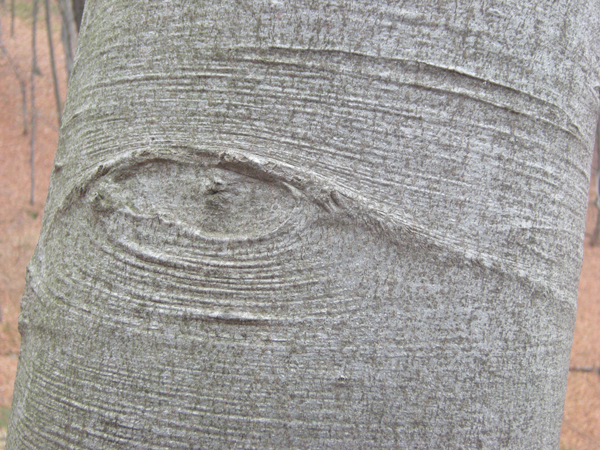 On the way to Mt. Avala I had noticed many small stands and roadside depots selling firewood.  All of the previous week during meetings in Belgrade I had been hearing the “buzz” about the results of a just-completed study of “Wood Energy for Sustainable Rural Development in Serbia,” funded by the U.N. Food and Agriculture Organization, which produced some results that the forest experts we interviewed called “surprising.”  This study showed that wood fuel is a larger component of the national energy balance than was previously estimated by the government, by a factor of several times.  Prior to this FAO-funded study, the Serbian Government agency responsible for national forest management said that wood contributed only 2-3% of Serbia’s total energy use, but this study showed that the real contribution of woody biomass is more than 13% of Serbia’s total energy use!  The study showed that wood energy is very important in Serbia, and needs to be viewed as an important component of a national energy strategy. Some people told us that they thought that the importance of wood energy was previously “hidden” or “underestimated” as a contribution of total energy for political and economic reasons.  There are very strong vested interests in Serbia to continue the use of dirty, low-quality lignite coal – of which Serbia has significant deposits – and to expand the use of natural gas, imported from Russia. But if, as the new figures suggest, wood fuel from Serbia’s forests provides approximately two-thirds of the energy for space heating nationwide, Serbian economic and energy security could benefit from limiting the use of domestic coal and imported natural gas – a threat to those vested interests.

Firewood depot on road between Mt. Avala and Beograd

Solid wood fuel is less expensive for home space heating than natural gas or electricity. Thus, people are turning back to wood for heating in this time of economic crisis, and the use of wood fuel is increasing.  We found firewood for sale for between 3,800 and 4,000 Serbian dinars for a cubic meter of stacked wood – about $50 – on the road from Mt. Avala to Beograd.

Firewood for sale on road from Mt. Avala to Beograd

Srbijasume, the State Forest Management Enterprise of Serbia, is charged with the actual management and oversight of the harvesting of state-owned forests that make up 53% of the forests of the country, and oversight of harvesting from private forest lands that cover 47% of the territory as well. On state forest land, the harvesting sector was privatized in 2003, and 250 small contractors harvest timber and fuel wood from those forests. Harvesting by these companies is not completely regulated, and harvesting of wood from private forests even less so. The Srbijasume Forest Extension Service has only 300 people to mark trees to be cut, on both state and private land.  This is not adequate, and this bottleneck is one of factors contributing to unregistered – or so-called “illegal” – logging.

Even our key informants in the Directorate of Forests of the Ministry of Agriculture, Forestry, and Water Management had told us that about one-half of the wood that was cut and sold in Serbia was “legal,” and one-half not.  This wasn’t really causing any significant forest degradation, they said, and they recognized that it was the result of the lack of capacity of the State Forest Management Enterprise to provide timely, adequate oversight of forest harvesting. They seemed not to be very concerned about this issue.

Firewood for sale at wood depot on road from Mt. Avala to Beograd

Nevertheless, on the local level – that is, the road from Mt. Avala to Belgrade – this issue of “illegal” logging is a sensitive one.  When I jumped out of the car and took a few pictures at one of the largest of the wood fuel depots we passed, the owner rushed out yelling “Hey, what’s going on here!” in Serbian. I smiled and quickly put my camera away, as Borko, the driver, intervened, saying: “Oh, this is my friend from America who is interested in how people live in Serbia.  Don’t worry!”  The owner calmed down, and as we drove away Borko joked that he was my “bodyguard” in this “study” of wood fuel use in Serbia.  I laughed, but clearly there are some strong sensitivities here.  At the end of the day I gave Borko an extra tip for his “protection” during my informal research on firewood economics in Serbia.