You are here: Home » Blog » Environment » Documenting Forest Change at the Muir Site

February 2013. Returning to the site where Muir camped and sketched, we followed the route he described, as we had last year. It was a hot summer day, and the thousand-foot climb to the ridge, which Muir described as steep but grassy, is now grown up in colihue, Chusquea coleou, a native bamboo that can form nearly impenetrable thickets. The top of the ridge below the scattered Araucarias is a tangle of brushy ñirre, Nothofagus antarctica, and bamboo. It was slow, sweaty going, but we made it to the Muir campsite in about three hours. Luckily there were nice pools of water in the stream, the headwaters of the Río Quino, to fill our water bottles. We were glad to have the company of Isaías Cófre, a CONAF park ranger at Parque Nacional Tolhuaca, on this trip to the Muir site. Isaías has lived in the Tolhuaca-Malleco area all his life, and has an intense passion for conserving it. 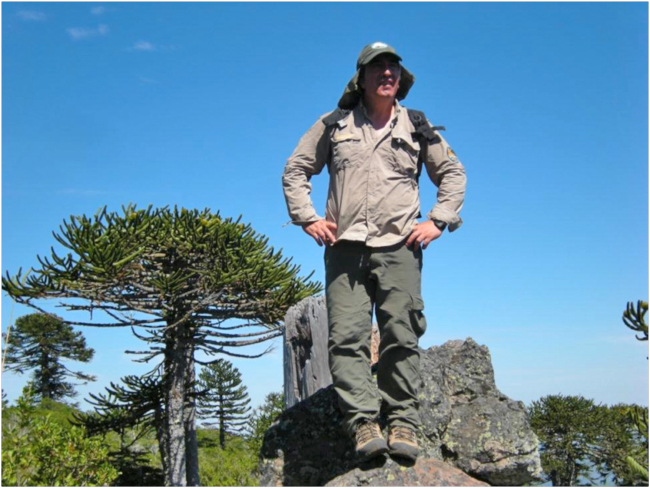 The forest surrounding the Muir campsite today is a thriving, multi-aged stand of Araucaria araucana, in contrast to the open forest of old trees in his sketches. We assume that Muir was sketching what he saw as accurately as he could, and that the young trees that now make it impossible to see the exact views he sketched were not there a century ago. To confirm this, we needed to do some limited tree-coring of young Araucaria, count the growth rings to determine their ages, and confirm that they were not much more than tiny babies a hundred years ago. Our colleague Mauro González, a forest ecologist from the Universidad Austral de Chile in Valdivia, will be processing the core samples and determining ages of these trees. Mauro is an expert on the dynamics and fire history of Araucaria forests, and has a permit from CONAF, the Chilean government forest agency, to core Araucaria for research purposes. 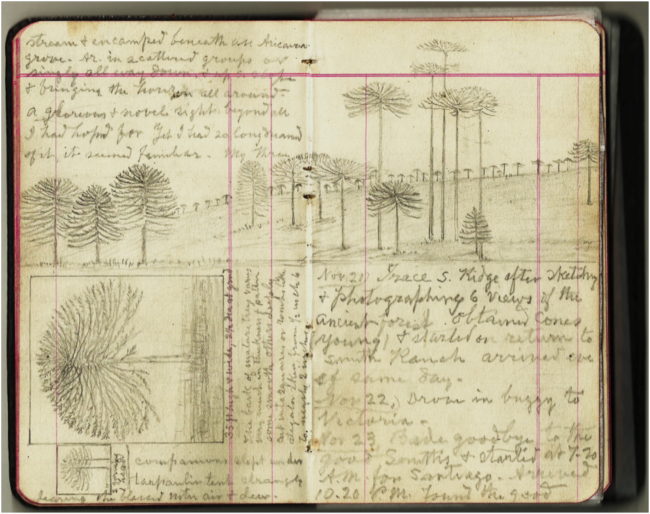 Muir’s sketches made near camp on the morning of 21 November, 1911, showing in the main sketch a group of five big old umbrella-form Araucaria and an open forest understory

Photo taken from approximately 100 meters up the slope to the south of the campsite, showing the “Big Five” umbrella-form Araucaria that were visible in Muir’s sketch, and the dense understory of young Araucaria that exists now. 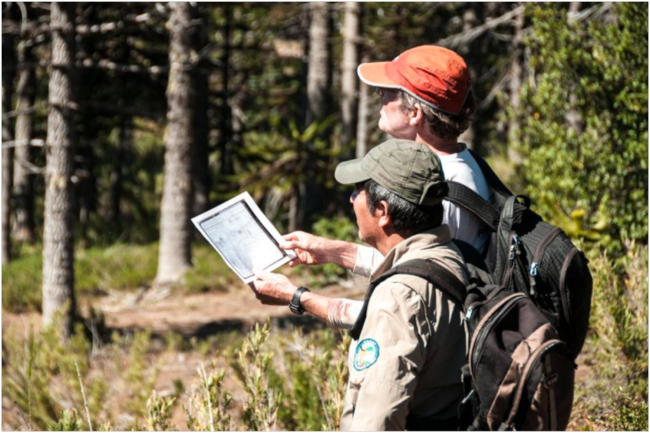 Isaías and Bruce looking for the view in Muir’s sketch (Photo by J. Byers) 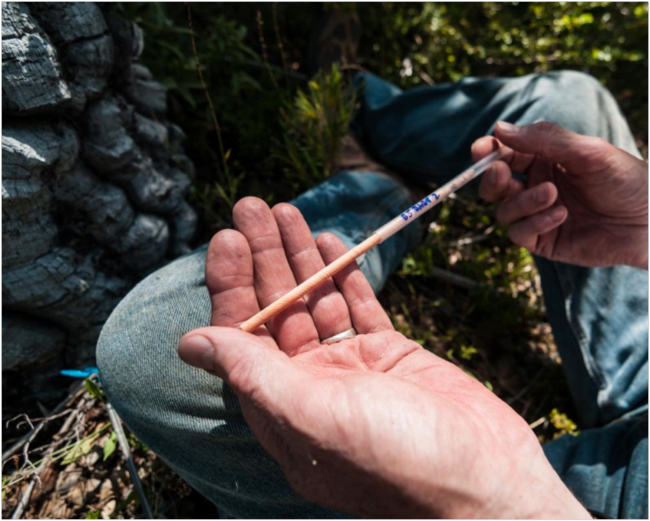 Core being inserted into a labelled plastic straw for protection 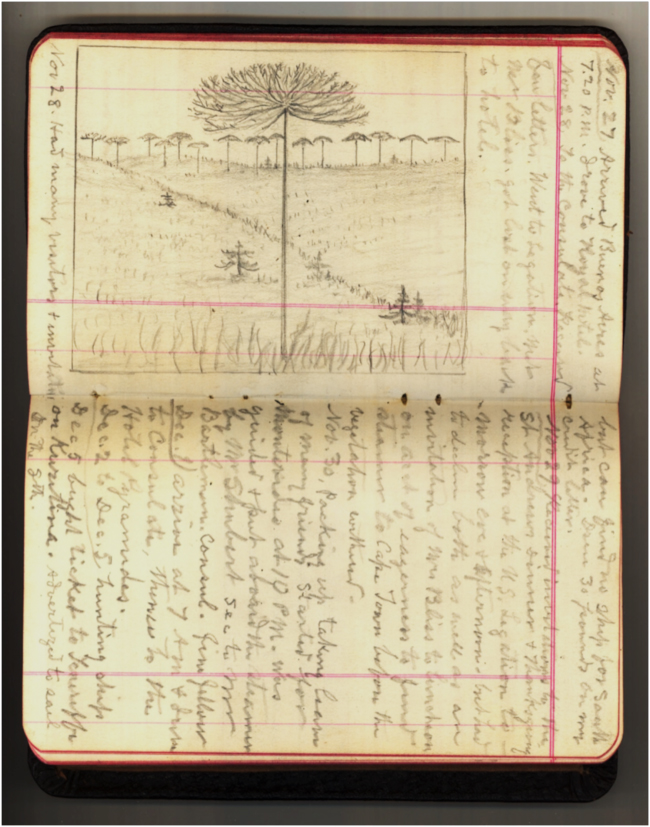 Another view of Araucaria sketched near Muir’s camp on 21 November, 1911 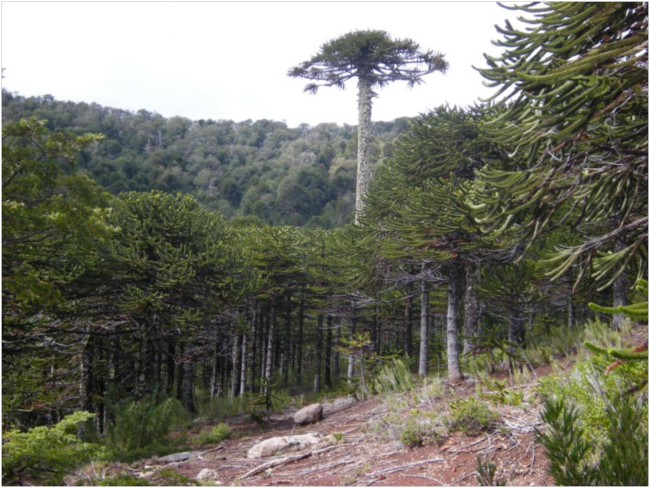 Possibly the same tree sketched by Muir, showing dense regrowth of young Araucaria in the foreground 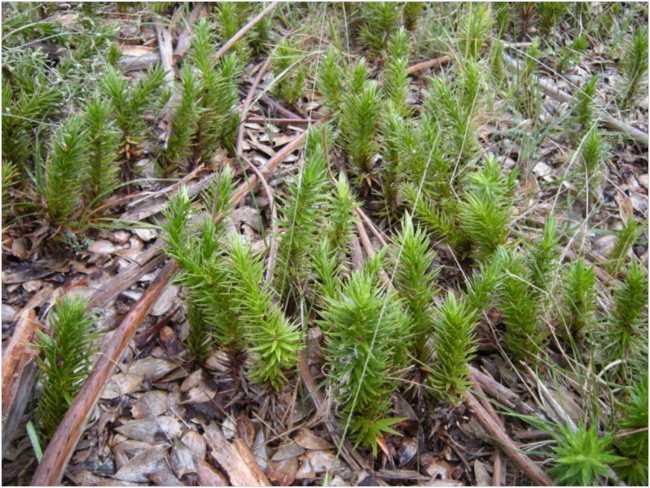 Dense carpet of Araucaria seedlings at the campsite

The dramatic regrowth of the Arauraria forest in the century since Muir’s visit reflects a significant reduction in the frequency of fires. Fire is known to be the major determinant of forest dynamics in Araucaria forests. In the century before Muir’s visit, fires were probably much more common, set by Mapuches and colonists alike to improve hunting, facilitate travel, and stimulate grasses for livestock grazing. Frequent fires would have killed most young Araucaria, creating an open stand of mostly old, fire-resistent trees like that seen in Muir’s sketches.

Arrowheads found by Isaías near the campsite

While we were taking cores from some young trees, Isaías was exploring around the campsite. In an eroded area of bare soil about 100 meters to the southwest he found lots of pottery fragments and two stone arrowheads. The potsherds had features very similar to those in collections of Mapuche pottery in the Museo Regional de la Araucania in Temuco and other museums that date from the period between 1000-1500 AD. The broken handles of cups or vessels, and some pieces with thin, red painted lines, were distinctive. This area has obviously been used by native peoples from pre-Colombian times, probably as a site for gathering Araucaria seeds, “piñones,” which were an important food for those people. 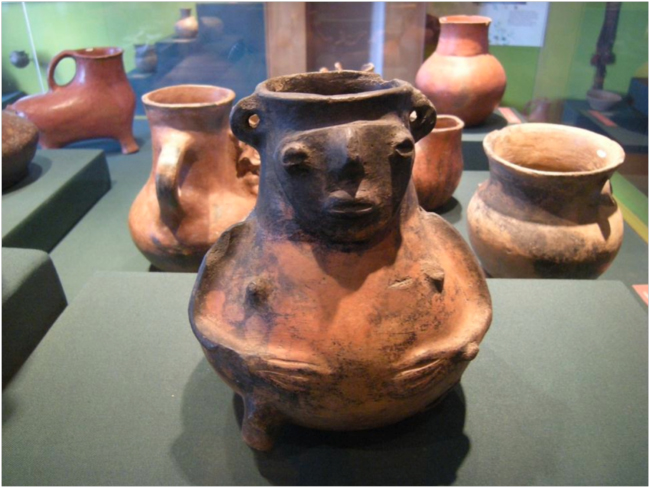 Mapuche pottery at the Museo Histórico y Antropológico, Universidad Austral de Chile, Valdivia, with features similar to those of pottery fragments at the Muir site

We had a deep feeling of the layers of ecological and human history in our visits to this place that John Muir visited. The big Araucaria he sketched may be a thousand years old, and arrowheads and potsherds that may be a thousand years old litter the ground. People and trees have been linked in a relationship here, the trees feeding the people, the fires set by the people shaping the forest. Muir’s sketches recorded a snapshot of that dynamic relationship, and our visits gave a time-lapse view of ecological and human changes in this place.