24 September 2012.  After our unsuccessful attempt to find the medicinal plants market in Phuza, near Ponta do Ouro (see The Map Is Not the Territory blog), the forest expert on our assessment team, Mario Falcão, promised to take me to Xipamanine Market in Maputo, which has a large section of traditional medicine sellers, supposedly the largest in Mozambique.  Finding parking near the sprawling market was an adventure in itself. Once inside we wound our way through the narrow crowded passages looking for the medicinal plants area.  Falcão had been here before and was navigating by feel: we passed sections of tea, beans, peppers, manioc, vegetables, rice; hurried past the nearly overpowering smells of stalls selling unrefrigerated chicken, fish, and beef; fought our way through the throngs shopping for cosmetics, shoes, underwear, CDs, DVDs, cell phones. Finally Falcão had to ask a teenage boy for orientation, who pointed “that way,” and at last we found the traditional medicine sellers. 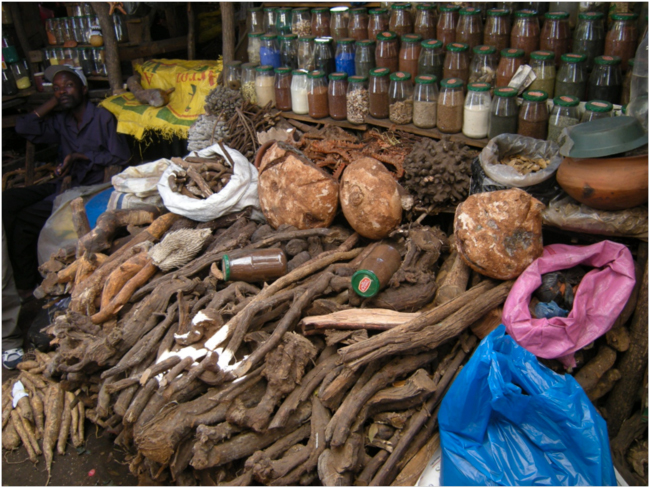 But oh! What dark secrets here!  Stacks of roots, twigs, and sections of branches were piled up from the floor at each of the dozens of tiny stalls. On top of the stacks of roots and sticks were giant tubers like cancerous basketballs, huge blades from green spiny aloes, dried pufferfish and starfish, lumps of coral, bowls of mica, rocks, and a yellow amber-like resin, hard as plastic.  Behind these displays were rows of jars of ground powders of all hues, mostly a spectrum of browns, but with some weird blues and purples mixed in.  At one of the stands there were hanging strips of unknown fur with long black hair; a dried mummy of a brown eagle, trussed with leather thongs; the shell of a chambered nautilus; gourds of various shapes and sizes.  At another the skin of a serval or other small spotted cat.

About 10% of the 5,700 plant species found in Mozambique are used in traditional medicines.  According to a study of traditional medicinal plants in which Falcão was involved, “Traders sold an average of 27±12.5 plant products. Roots constituted more than 50 % of the products sold from 99 different species, of which 51 were identified. Half of the identified species were tree species.” This is biodiversity at work, and the conservation of forests and other natural habitats where this wild pharmacopoeia grows will allow local people to continue to benefit from these traditional medicines. But the economic and health importance of traditional medicine at household and individual levels is not well understood.  Not surprisingly, there is a huge communication gap between practitioners of traditional and modern medicine.  This gap will have to be closed to design appropriate health policies in a country like Mozambique, not to mention conservation strategies for the traditional medicinal plant biodiversity of the country. 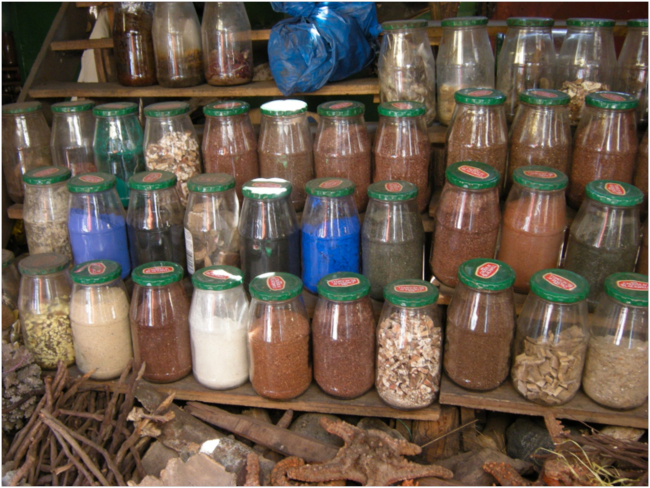 Some of these plants may be overharvested, a botanist from the Universidade Eduardo Mondlane told us, and the ecology and population status of these medicinal plants needs to be studied in areas where they are traditionally gathered. The Licuáti Forest near Ponta do Ouro, where we tried to find the medicinal plants market, and the Potoni Forest near Angoche, in Nampula Province, where we went a week later, are some of these traditional medicinal plant harvesting areas.  Slow-growing species with limited distribution and high demand, such as Warburgia salutaris, are nationally endangered.

Characterizing the chemical compounds in these traditional medicinal plants is a first step in pharmacological “prospecting” for potentially valuable drugs, but it is just beginning in Mozambique. Warburgia salutaris, sometimes called the Pepper Bark Tree, is used by the Maasai of Tanzania and Kenya to treat malaria. Its bark is also used as a snuff or smoked for respiratory complaints such as colds and coughs. Chemical compounds called furans and furanones isolated from the bark of this tree have been tested and have showed antimicrobial activity.

As indicated by the pufferfish, coral, fur, and mummified eagle, plants weren’t the only wild medicines used by traditional healers. One of Falcao’s students had studied the use of animal species in traditional medicine for his thesis, and found that in addition to their plant products vendors were selling an average of 13 species of animals as medicines, including terrestrial, marine, and domestic species. Some of the animals being sold were threatened and endangered species, so their harvest for medicinal uses may represent a conservation threat, as is the case for some plants. 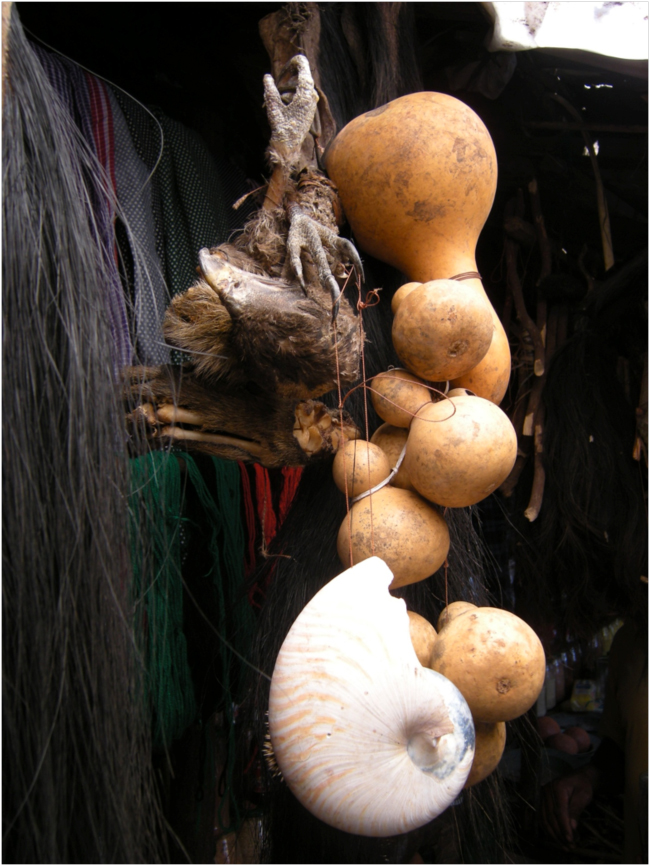 After Xipamanine, Falcão also wanted to show me the charcoal market at Xiquelen, in another suburb of Maputo.  Xipamanine, Xiquelen – these “X” names reminded me of Aztec words, and seemed so exotic. “X” is pronounced “sh” in Portuguese.  When I described going into a market in Oaxaca, Mexico, to find the traditional medicine sellers in an area that had a similar feeling of dark mysteries as in Xipamanine,  Falcão asked me how “Meshico” compared with Mozambique.

That conversation occupied us as we fought our way through traffic-clogged streets, sweating in the unairconditioned vehicle on a hot sunny morning.  At Xiquelen, parking was easier, because the charcoal market was on the outskirts of the main market.  At least a dozen sellers had large depots of charcoal in reused rice bags, like we had seen for sale on the roads leading back to Maputo from Ponta do Ouro.  Falcão soon engaged a physically-substantial young woman toting a tiny baby, one of the charcoal brokers, in conversation.  All of these charcoal brokers are women – apparently because their customers are also women, the cooks for the family. And so women do the business both of buying and selling the fuel for cooking.  Her charcoal was for sale at a price of 900 Mozambican metacais per bag – about US $31 – each bag weighing about 75 kilograms, or around 165 pounds. The woman told Falcão that she buys charcoal from producers in areas ranging from 200 to 500 kilometers from Maputo – roughly 125 to 300 miles away – where the producers are selling it for 200 metacais per bag.  That was the price of the bags we saw for sale on the road from Ponta do Ouro. Transportation costs account for a big part of the price markup. 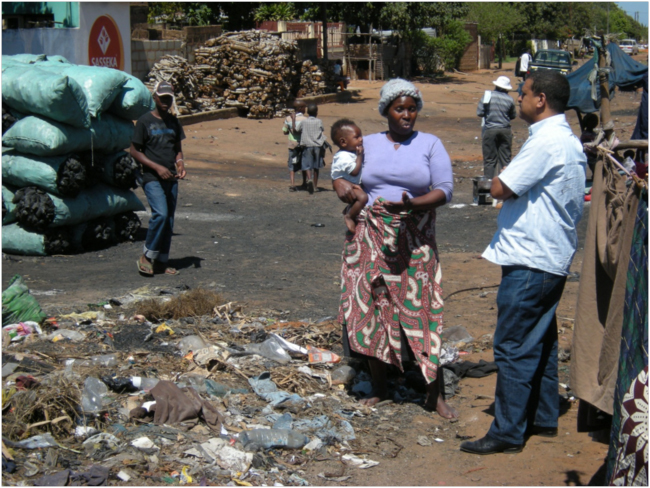 Falcão has been involved in many studies of the charcoal economy.   In one study of charcoal production areas near Maputo, he reported that “… it is estimated that 75% urban households use charcoal (and all poor urban households use it) for cooking, about 50% use charcoal for heating water for bathing and water for drinking, and 70% use charcoal for heating in cold season. There is a kind of ladder of energy sources in the urban areas: from fuelwood at the bottom, through charcoal, kerosene and gas, to electricity at the top. People generally climb this ladder as their income increases. Therefore charcoal, which is hardly used in the rural areas because of availability of free wood, is quite popular in urban areas because of higher income and other factors such as its lightness and non-smoking nature.” Charcoal is a significant enterprise in a country where the average person’s share of the Gross Domestic Product is around $1,000 a year: “In Mozambique about 150,000 families are employed in charcoal production and on average the annual income generated is about US$250-300 per family.” 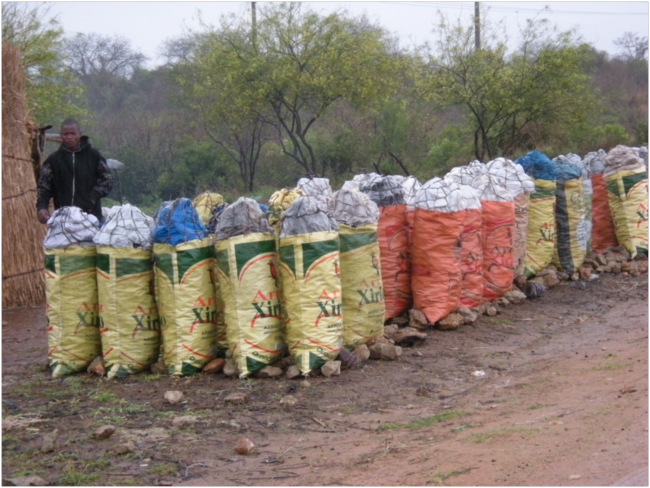 These visits to Xipapanine and Xiquelen highlighted some interesting aspects of the value of biodiversity, the multitude of species that make up ecosystems.  One person we interviewed used the image of a “flow of biodiversity,” in which the valuable wild species from the country’s ecosystems are harvested and move along transportation lines to the points of use, the population centers, the cities.  This was a new idea to me: a “biodiversity-shed” – something like a watershed is for water.  Here, in Maputo, at Xipamanine and Xiquelen, Falcão was showing me the focal points of the  biodiversity collection networks for medicinal plants and for the tree species that are used for charcoal. Around a hundred species of wild plants and a dozen species of animals converge here in the traditional medicines market, and around thirty species of trees produce charcoal to cook the meals of the majority of Maputo residents.

Is this a threat to biodiversity?  Or a good thing?  It is a good thing if the people using these resources recognize their value, want to conserve them, and also have help from government policies and laws to do so.  But it is “bad” – dangerous and unsustainable, that is – if the users don’t understand that these ecosystem products are not free and limitless, and don’t understand that they need to be managed and conserved so they can be used sustainably far into the future.