June 2015. Another day of testing our methodology for rapid botanical surveys for the “Strengthening the Information Base of Natural Habitats, Biodiversity, and Environmental Services in the Shire River Basin” component of the World Bank’s Shire River Basin Management Program, which I described in my last story posted here. Instead of going up into cool montane evergreen forests, today we were going to survey a much more widespread, lower-elevation ecosystem, the miombo. Miombo woodlands surround Malawi’s mountains like the ocean surrounds islands. 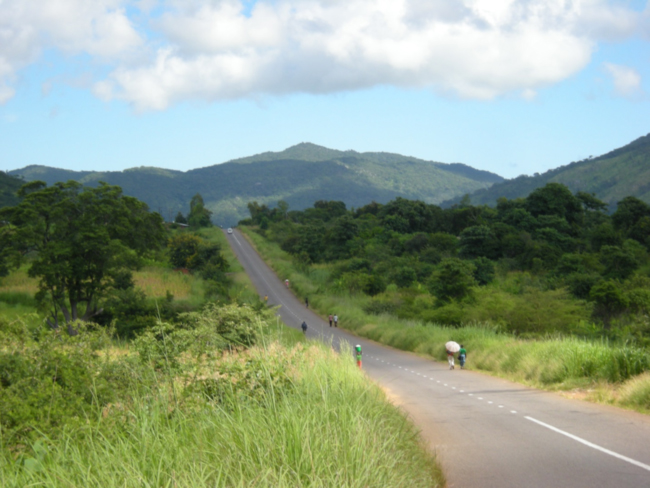 The road from Zomba to Machinga

“Miombo” may be a new word for you. It’s the general name for a type of tropical woodland found across an estimated 3.6 million square kilometers in central and southern Africa, an area about half as large as the continental U.S., China, or Europe. Yes, Africa is a huge continent!  Miombo woodlands cover parts of eleven countries – Angola, Botswana, Democratic Republic of Congo, Malawi, Mozambique, Namibia, South Africa, Swaziland, Tanzania, Zambia, and Zimbabwe.

The miombo is found in a climate belt with a very pronounced and long “winter” dry season, from roughly May to November, during which most of the trees shed their leaves, the way temperate-zone trees do in autumn, at the beginning of the winter cold season. The dominant dry-season-deciduous trees of the miombo are members of the legume subfamily Caesalpinioideae. Please marvel with me at that amazing word – Caesalpinioidae – a legacy of the scientific taxonomy based on Latin root words established by Linnaeus! Botanists sometimes refer to miombo as “Caesalpinoid woodlands,” or “Brachystegia woodlands,” because in many places the dominant trees belong to the genus Brachystegia. Miombo woodlands usually have a grass understory because they are often open, with the trees widely spaced, and so qualify to be called “savanna woodlands” in ecological terms. OK, that’s more than you may want to know.  But you should know that they are beautiful. And they are supremely useful to their human inhabitants.

The ecological dynamics of miombo woodlands have been shaped in many ways by humans, but it may not ever be possible to fully untangle just how. Humans have lived in the miombo ecosystem in Africa for so long that some anthropologically-inclined forest ecologists call it an “anthropogenic woodland” or a “social forest.”  If “pristine” is defined by the absence of human influence, miombo ecosystems don’t qualify. For example, fire is an important factor in miombo ecology, it is anthropogenic to a significant extent, and may have been so for tens of thousands of years, if not a million. Because of the long dry season, the grass understory of miombo woodlands dries out, and fires start and spread easily. Lightning is also a significant natural cause of fires in this ecosystem. 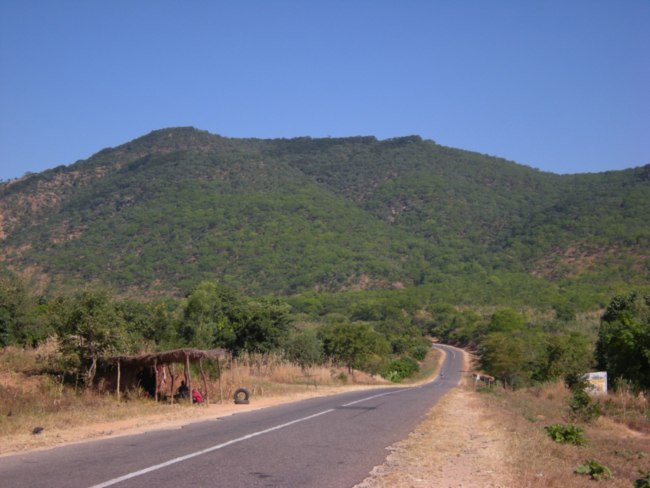 The miombo is the native habitat of the wild honeybee, Apis mellifera. Many miombo trees have nectar-rich flowers that lure honeybees to visit and pollinate them. Since hunter-gatherer days – so for perhaps hundreds of thousands of years – our ancestors have been using fire in miombo woodlands to smoke honeybees out of their hives and steal their sweet honey.

African agricultural cultures also learned a trick for growing crops on nutrient­­-poor miombo soils: cut down all the trees in an area of this woodland, and burn them.  The nutrients stored in the trees over decades and released in the ash of the fire will fertilize the soil for a few years, producing abundant yields of maize, finger millet, pigeon peas, and other crops. In this system of swidden, or “slash and burn” agriculture, low-density populations could move on, and wait for the woodland to recover.  It doesn’t work anymore, in an Africa with exponential population growth.  But the fires in the miombo go on.

Because of its co-evolution with natural and anthropogenic fire, miombo woodlands have become very fire tolerant, and some species have even evolved to be fire dependent. Many miombo species “bank” a lot of their acquired energy underground, in roots, where it can’t burn. That underground reservoir of stored carbon has created the conditions for a rich biodiversity of fungi – mushrooms. Miombo fungi live on the roots and utilize the underground biomass, help cycle nutrients in these poor dry soils, and periodically send up crops of delicious edible mushrooms that are harvested by local communities. 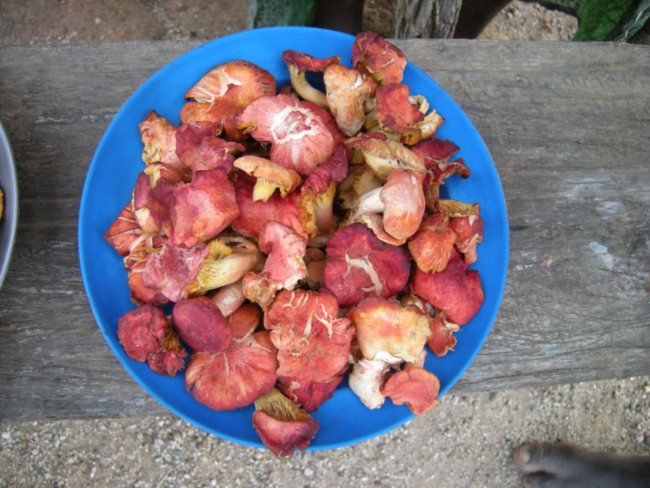 So we drove north from Zomba on an early June morning. The dry season was getting underway, and it was warm, but not humid. We stopped at the small village of Machinga to greet the District Forest Officer, and pick up a member of the Forestry Department staff and some local community representatives who would guide and accompany us to the site of our botanical survey. A little farther down the road to Liwonde we turned off on a narrow track through the roadside village, heading for the miombo-covered hills behind it.

We parked, gathered our plant-collecting gear, and hiked up the sunny slope to find a good location for our rapid botanical survey. This area was inside the Liwonde Forest Reserve, a forest area protected at the national level by the Malawi Department of Forestry, but here it was co-managed with the local Machinga community. The official co-management agreement gives local people the right to harvest and use certain forest resources, including mushrooms, medicinal plants, and grass for thatching their houses.  In return, it is the community’s responsibility to keep an eye on the area, and protect it from unsustainable uses such as charcoal production. 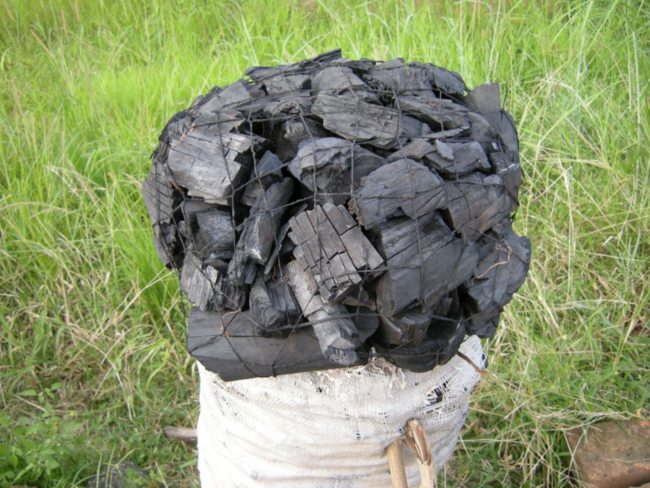 Charcoal for sale by the road, Machinga

Halfway to the top of the ridge the botanists determined we were in an appropriate spot for the plant survey. We had a long view toward Liwonde National Park, the Shire River, and the town of Liwonde. No deep forest shade here like yesterday in the forest on Zomba Mountain, but it was pleasant enough in the thin shade of a big Brachystegia, and the light breeze was dry and cooling. 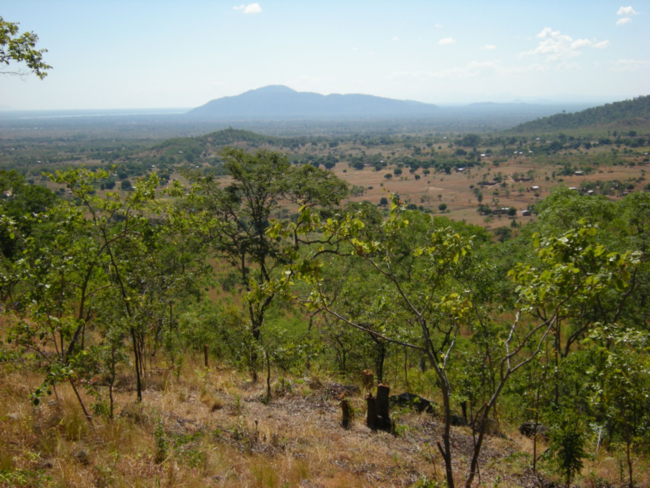 The foresters from the Forestry Institute of Malawi and botanists from the National Herbarium and Botanic Gardens got to work collecting all the plants they could find. My deputy team leader, Daulos Mauambeta, sat under another tree with members of the local community, who then fanned out to find specimens of all of the edible, medicinal, or otherwise useful plants they could find here. This was the ethnobotanical extension of the rapid botanical survey methodology we had tested yesterday on Zomba Mountain. 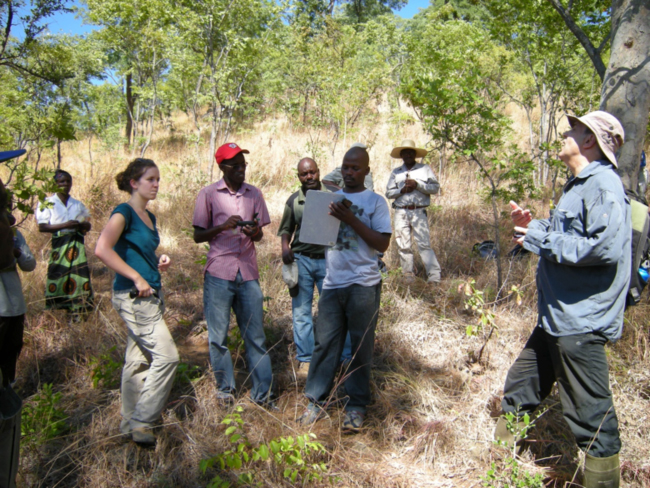 While the team was doing its botanical and ethnobotanical work, I wandered around the hillside woodland, looking. Not far from where we had established our plant-collecting base I began to see stumps of miombo trees that had been recently cut, and found the remains of a charcoal kiln. When we asked the community members about it, they told us that this was done by people from a community on the other side of the ridge. They said that they had confronted the charcoal-makers on several occasions, and tried to stop them, and had even had brought the police with them sometimes. But the charcoal-makers threatened them with violence and wouldn’t stop, they told us. The miombo woodland we were sampling here is gradually losing its big, old trees to make charcoal, and its future depends on the delicate balance between the economics of charcoal production and the power of the local community, the Forestry Department, and the police to stop this illegal activity.

As was the case in the montane forest on Zomba Mountain, after about two hours the botanists and foresters had exhausted their search for new plants or trees. They had found about 83 species, 14 of which were trees – even more botanical diversity than on Zomba Mountain! That was surprising to me, because I assumed there would be fewer plants at this much drier site. 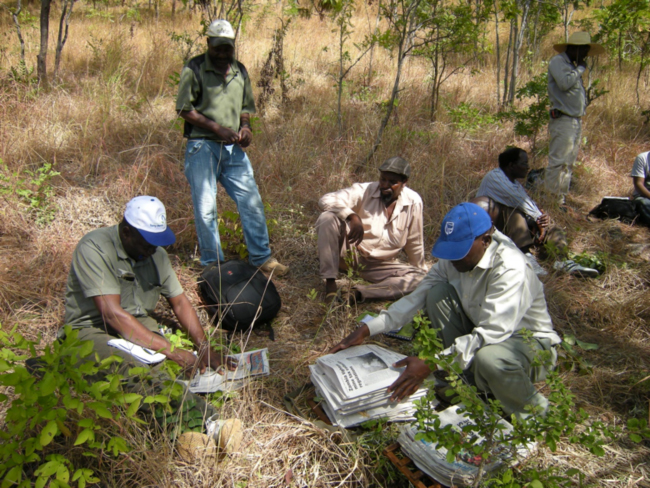 Plant collection at the survey site

The community members debriefed the group on the useful plants of the area.  One species that caused a lot of excitement, and laughter – at least among the men in the group – was an understory plant with sprays of long leaves that supposedly had aphrodisiacal powers.  All of us – at least the men in the group – took a leaf or two and chewed it, following the lead of the men from the local community.  It tasted vaguely like spinach. If there were any effects, I didn’t notice them immediately. 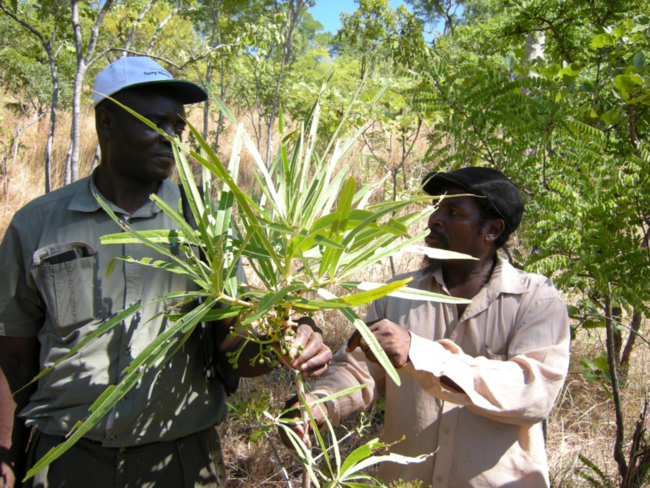 Another plant that was identified by local people as useful was even more fascinating to me, however. It had a small tuber about the size of a peanut, with straggling attached roots, which smelled earthy, a bit carrot-like. The botanists from the National Herbarium identified it as Dicoma anomala, of the plant family Asteraceae. The roots of this plant, according to the herbalist from the local community, is used for making a tea that cures stomach problems. If you google Dicoma anomala, you will find that its common names from Africa suggest its widespread traditional use as a medicine for stomach problems and also fever. A recent scientific paper evaluates its anti-plasmodial properties against the parasites that cause malaria. 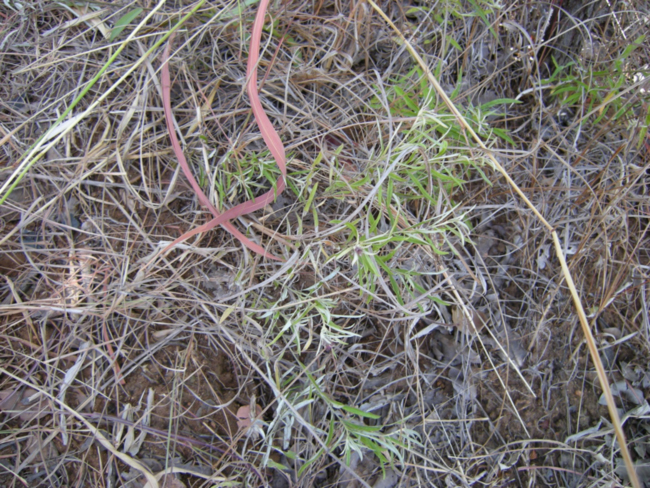 But even more interesting were its other “medicinal” properties. It has several names in the local languages, the community members told us. Palibekanthu is one name, which means “there is nothing,” or “no issues here.”  Another is musiyeni apite: “let him go.” And another is mdima, “darkness.” The explanation my deputy team leader Daulos gave for these names was: “If you are travelling at night, or during the day, put it in your pocket, and you will have no problems with people – no one will stop you, no one will bother you.” The names suggest that the plant makes you invisible to trouble, or invisible to authorities or criminals who would otherwise give you trouble. “I need that!” I said immediately, without really thinking.  Daulos handed me the plant specimen, and I put it in my pocket. 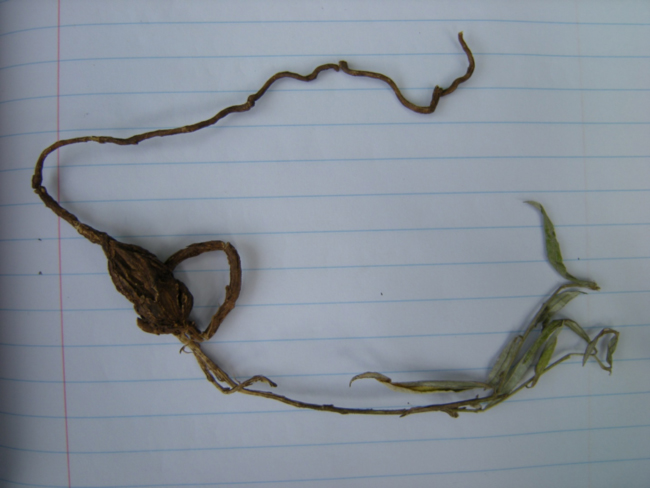 A few days later I flew from Blantyre, Malawi, on Ethiopian Airlines, through the crazy and disorganized airport at Addis Ababa, and back across several continents and an ocean, to my home in the Washington, DC, area. All of the flights were on time. I didn’t experience any problems with immigration or customs, and my luggage made it with me. On the long overwater leg from Addis to Washington the flight wasn’t full, and I had a whole row of seats to myself, so I could stretch out – unlike on the way over, which was crammed sardine-full, every seat taken, complete with crying babies, overflowing lavatories, and surly stewardesses.  As I unpacked, I smiled as I remembered that magical sunny morning in the miombo woodlands above Machinga.