You are here: Home » Blog » Education » Mangroves of Lamu

Dropping down to land at the Lamu Airport after a flight of a little over an hour from Nairobi gave a gull’s eye view of the extent of mangrove cover. Low forests of these salt-tolerant trees covered every tidal creek, inlet, and shoreline. Mangroves fringe large parts of the Kenya coast — the total area of mangroves in Kenya has been estimated to be between 53,000 and 61,000 hectare, with 67% occurring in Lamu District.  It is estimated that around 10,000 hectares of mangrove forests has been lost from conversion, over-exploitation, or pollution. All nine species of true mangroves found in East Africa occur in Kenya, with Rhizophora mucronata and Ceriops tagal being dominant and represented in almost all the mangrove stands.  Mangroves provide feeding, breeding, and refuge habitats for many species of fish and shellfish that are important in near-shore fisheries.  Studies suggest a symbiotic relationship between mangroves and nearby coral reefs, mediated through sediment trapping and nutrient cycling ecosystem services that mangroves provide.

We landed at the small airstrip on Manda Island, met by a couple of boys, barefooted and in their kikoi wraps and T-shirts, who grabbed our bags and walked us down a sandy road to the dock, where a dhow was waiting to ferry us across to Lamu town, on Lamu Island.  In about ten minutes we were at the main dock, climbed ashore, and followed the boys along the dusty waterfront street bustling with late afternoon activity to Lamu House where we were staying. 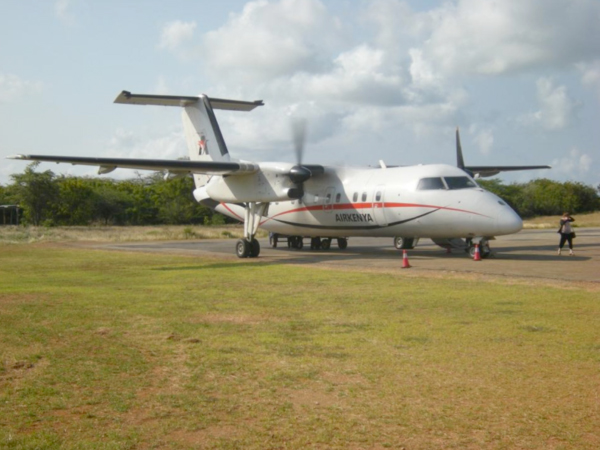 After a short rest on my breezy balcony, I wandered out again, this time along the waterfront in the other direction, and was soon struck by the other end of the mangrove equation.  Mangrove wood is used for many important purposes.  A traditional boatbuilding was constructing two small dhows under the shade of a big tarp stretched from poles.  The ribs of the boats were made of mangrove wood, and a pile of construction material sat unsawed in front of the workshop.  Traditional dhows are everywhere in Lamu, and I could start to imagine how important these intertidal forests are to daily life and survival. 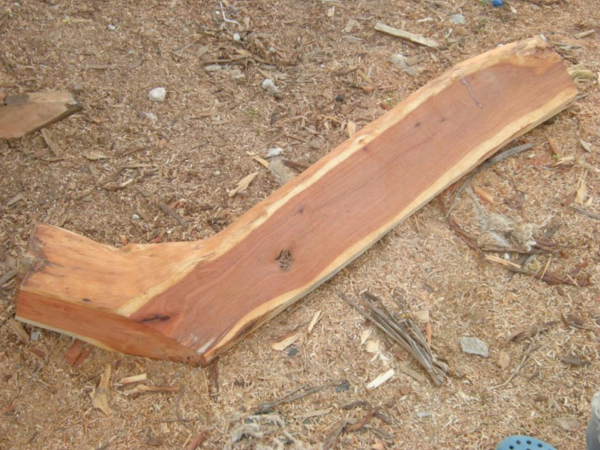 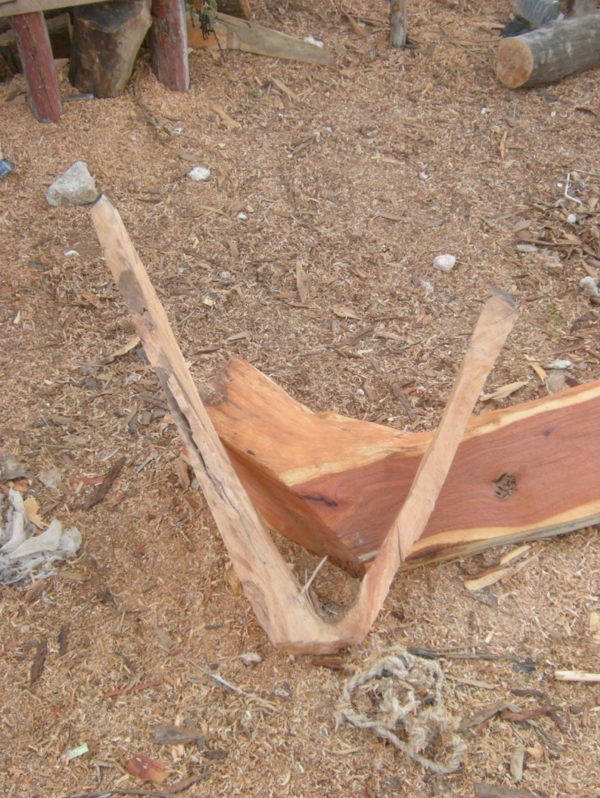 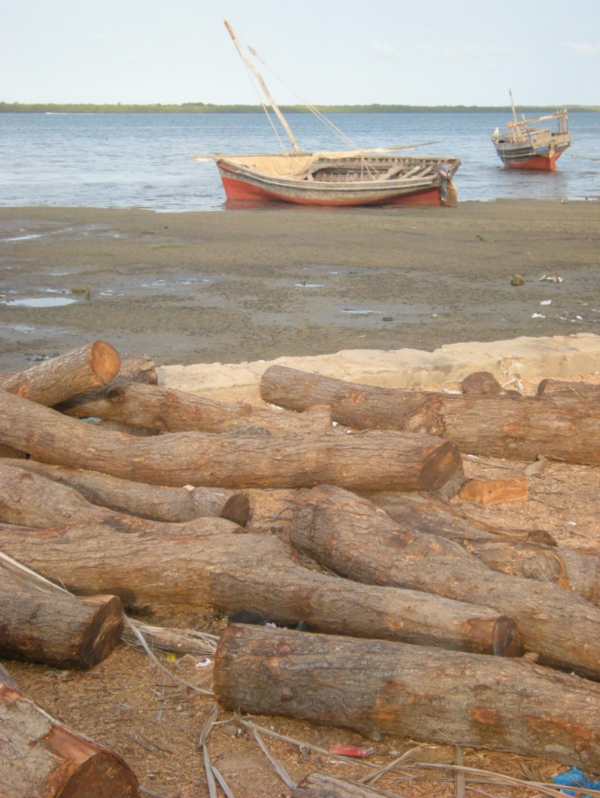 Farther on I spotted bundles and piles of straight mangrove poles.  These are used in house construction – mainly for the beams that hold the ceilings of traditional Lamu buildings.  I noticed them again on the ceiling of my room at Lamu House, the wood exposed with plaster between the rows of roof poles.   Some mangrove wood is also burned in lime kilns, where crushed coral rock is made into the simple cement that is the mortar used to bind coral blocks together to build traditional houses. 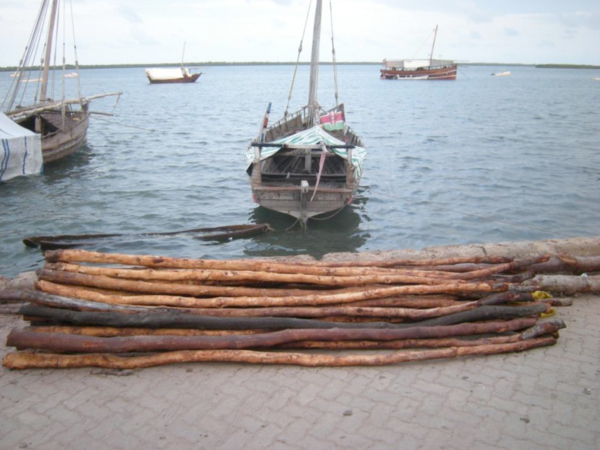 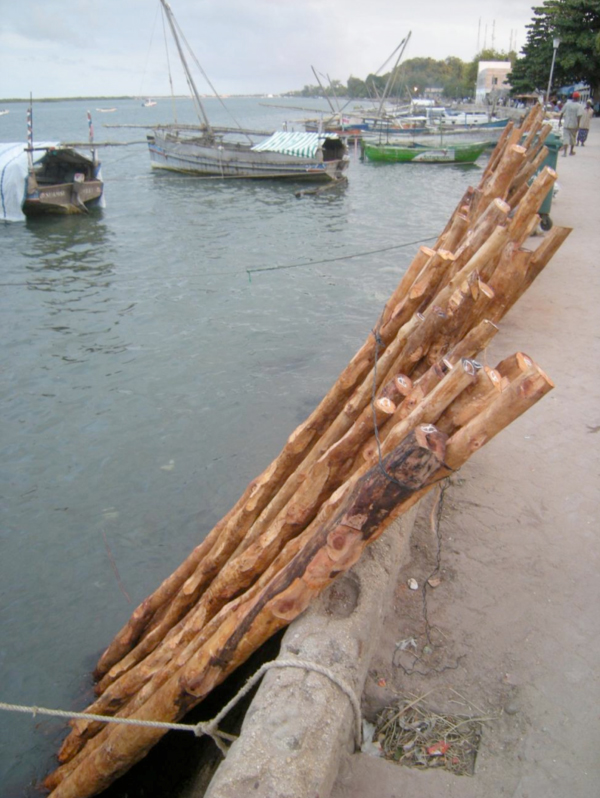 The next day, travelling to Kiwayu Island in the Kiunga Marine National Reserve, we
slid through narrow channels with mangroves pressing from the shore, and got a good look at the structure of these amazing trees.  The roots spread like tiptoeing octopi to balance and brace the mangrove trunks and foliage on the muddy shore.  The maze of roots provides surfaces and hiding places for a myriad of creature.  We would enjoy a feast of mangrove crabs later at the lodge where we stayed – only one of many fish and shellfish that depend on mangroves. 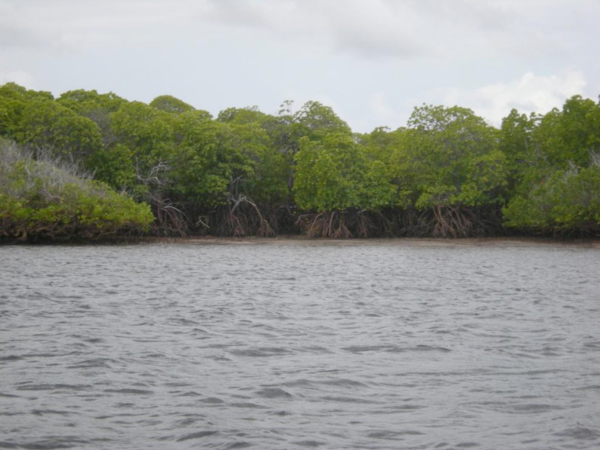 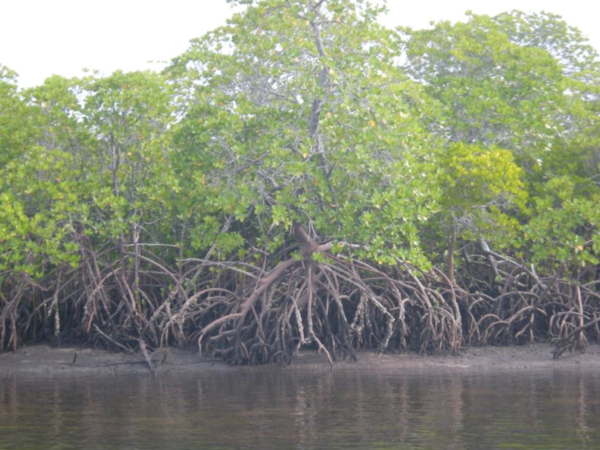 Back in Lamu after our visit to Kiwayu Island, we met with the chairman of the Lamu Mangrove Cutters Association to talk about harvesting, regulations, and sustainability of this important natural resource.  He walked us through the economics of the mangrove trade – mainly the poles used for building.  In Mombasa  20 poles sell for about 2,200 Kenya shillings, he said – about $25.  Cutters in Lamu get about half of that amount.  The Kenya Forest Service takes a “tax” of 500 KSh a bundle, he says, but they don’t do anything to monitor or regulate cutting.  He says that the way they cut – selective cutting – is sustainable, more like thinning than anything else.  He says that they have conserved their mangroves here in the Lamu area, but admits that when he was a boy there were more mangroves.

Meanwhile, the Government of Kenya and unnamed powerful international economic interests – the Chinese, Persian Gulf states, and others are rumored – are planning a huge new port just north of Lamu that will require massive mangrove clearing and dredging operations.  The port is supposed to anchor a transportation and development corridor, the Lamu Port South Sudan Ethiopia Transport Corridor, or “LAPSSET Corridor” for short, that will run through arid northern Kenya – including the Samburu area where we visited conservancies a week ago – on its way to South Sudan and Ethiopia.  The Japanese are rumored to be designing the port already – after which an Environmental Impact Assessment supposedly will be conducted.  People in Lamu are worried, but no one is consulting them or asking their opinions.  They will be the last to know, and will likely find out that it is happening when the President of Kenya cuts the ribbon and launches the first dredge.