You are here: Home » Blog » Biodiversity » A Walk on Wachusett

A Walk on Wachusett

April 2018. “Summer and winter our eyes had rested on the dim outline of the mountains, to which distance and indistinctness lent a grandeur not their own, so that they served equally to interpret all the allusions of poets and travelers,” began the first sentence of Henry David Thoreau’s essay “A Walk to Wachusett.” This short essay was published in January 1843 in The Boston Miscellany, a regional magazine. It was “Thoreau’s first piece to reach a wider world,” according to his recent biographer, Laura Dassow Walls. Walls also calls it “his next original essay,” explaining that he had first found his unique voice in a work that was not aimed or destined for a wide public audience, “Natural History of Massachusetts,” published in 1842 in the Transcendentalist literary magazine, The Dial. That essay was nominally a review of a series of dry, technical scientific reports, but into it Thoreau wove a personal viewpoint and philosophical, historical, and literary commentaries, exploring a combination of elements that came to define his later voice and style. It was, says Walls, “a proto-Walden, rough and imperfect, but leaping with life. It was like nothing Thoreau had written before; in places it was like nothing anyone had written before.”

In the first paragraph of “A Walk to Wachusett,” the young Thoreau made a leap that is one of the defining aspects of his worldview. He likened or equated Wachusett and other hills west of Concord to the most remote, exotic, and extreme mountains in the world, saying that they “served equally to interpret… the more modern Andes and Teneriffe [sic],” explored by Alexander von Humboldt. Humboldt was the most adventurous scientific explorer of his time, the founder of the science of geography, and arguably also the first ecologist. Thoreau and his friends in Concord had certainly read Humboldt’s first volume about his adventures in South America, Personal narrative of travels to the equinoctial regions of the New continent during the years 1799-1804, which was published in 1814. Thoreau was a Humboldtian explorer at heart, who found his “cosmos” close to home, in and around Concord.

Having grown up among western mountains in New Mexico and Colorado, I’ve long been dismissive of the so-called “mountains” of eastern North America; to me they were “kid’s stuff,” hardly worthy of the name “hills.” But to Thoreau and his Concord contemporaries, these high points on the sunset horizon exerted a strong pull of mystery and adventure. In “A Walk to Wachusett” he mentions Mt. Monadnock – an isolated peak in southeastern New Hampshire about 40 miles from Concord and only a little over 3,000 feet high – as one of the sister mountains of Wachusett. These peaks to which Thoreau referred were nubbins of hard rock that hadn’t been scoured off by the continental ice sheet that ground down the old landscape here.

In the second paragraph of the essay Thoreau announces another important piece of his worldview: the continuity, or maybe even unity, of the ecological landscape and the psychological landscape. He wrote that “In the spaces of thought are the reaches of land and water, where men go and come. The landscape lies far and fair within, and the deepest thinker is the farthest travelled.” I don’t think Thoreau saw these two “landscapes” as a dichotomy of “exterior” and “interior,” but rather one and the same – a unified field, a “cosmos” in the Humboldtian sense. His view is transcendentalist; it is ecocentric, rather than anthropocentric; and it overlaps significantly with the eastern philosophies of Hinduism and Buddhism, with which he was becoming familiar. I’ve long been fascinated with the book Steps to an Ecology of Mind (1972), by Gregory Bateson, the polymath anthropologist and husband of Margaret Mead. Thoreau was already discovering – way ahead of his time as he often was – the idea of a geography and ecology of mind in 1842 on his walk to Wachusett.

In mid-July of 1842, Henry set out to climb Wachusett with his friend Richard Fuller, younger brother of Margaret Fuller, who had been the editor ofThe Dial. “Taking advantage of the early hour, on a pleasant morning in July, my companion and I passed rapidly through Acton and Stow, stopping to rest and refresh us on the bank of a small stream, a tributary of the Assabet, in the latter town. As we traversed the cool woods of Acton, with stout staves in our hands, we were cheered by the song of the red-eye, the thrushes, the phoebe, and the cuckoo; and as we passed through the open country, we inhaled the fresh scent of every field, and all nature lay passive, to be viewed and travelled.”

The two made it to the base of the mountain – 26 miles, the distance of a marathon – and stayed in a local inn that night. They left early the next morning, “in the grey twilight, after it had been hallowed by the night air,” and hiked another four miles to the base of the peak. “In due time we began to ascend the mountain, passing, first, through a maple wood, then a denser forest, which gradually became dwarfed, till there were no trees whatever. We at length pitched our tent on the summit. It is but nineteen hundred feet above the village of Princeton, and three thousand above the level of the sea; but by this slight elevation, it is infinitely removed from the plain, and when we have reached it, we feel a sense of remoteness, as if we had travelled into distant regions, to Arabia Petrea, or the farthest east, so withdrawn and solitary it seems.”

Taking advantage of the fact that my route from Hadley, Massachusetts to Concord passed close by Wachusett, I decided to stop by and walk on the “mountain” of Thoreau’s essay. From my I-phone the calm and confident woman’s voice on Google Maps navigated me along back roads. “In a thousand feet, turn right onto Park Road…” OK, I’ll do that… I have started to trust and depend on her, although a few times she has confused me or led me astray. Does she have a name, I wonder? 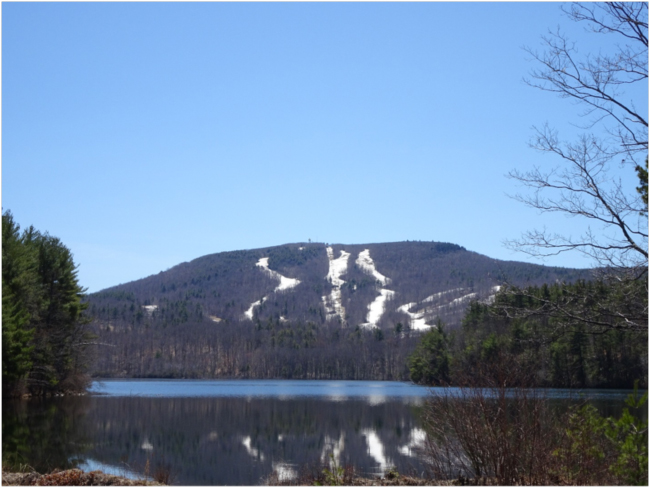 The still-snow-covered ski runs of the Wachusett Mountain Ski Area spilled down the north side of the mountain, and in the parking lot of the Wachusett Mountain State Reservation visitor center piles of snow plowed from a recent spring snowstorm were still melting. The road to the summit was closed for the season, so the only way up was on foot. But on this sunny April day I wasn’t alone on my walk on Wachusett. The parking lot was half full, and along the main, most-direct trail to the summit there were couples with their dogs, hiking clubs of oldsters with their trekking poles, families towing children by the hand, and joggers going both up and down. But by adjusting my pace I could walk in relative solitude. 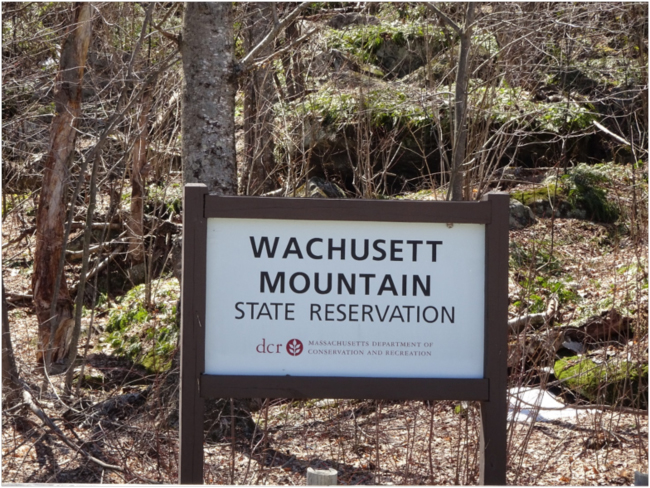 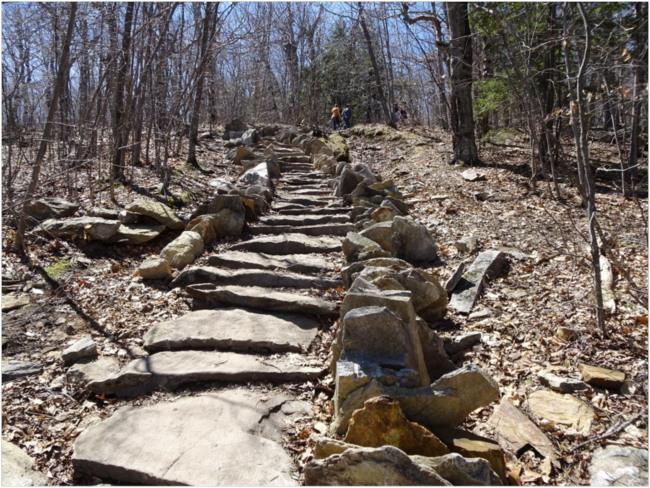 Main trail to the summit

When the trail finally broke through the trees at the summit I tried to reconcile my view with what Thoreau saw 176 years ago, struggling to imagine the “sense of remoteness, as if we had travelled into distant regions” that he described. Giant microwave communications towers and a fire lookout now dominate the gently rounded top of Wachusett, and a big parking lot, empty that day because the road was closed, lies below it on the east side. I ate my lunch looking north and west, trying to ignore the crowd of other hikers. On the western horizon I could just make out the low shape of Mt. Holyoke, where I’d walked that morning, searching for the viewpoint of Thomas Cole’s painting, The Oxbow. 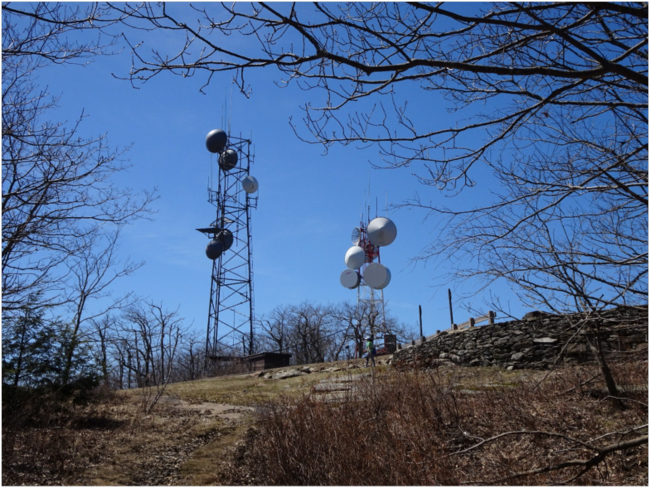 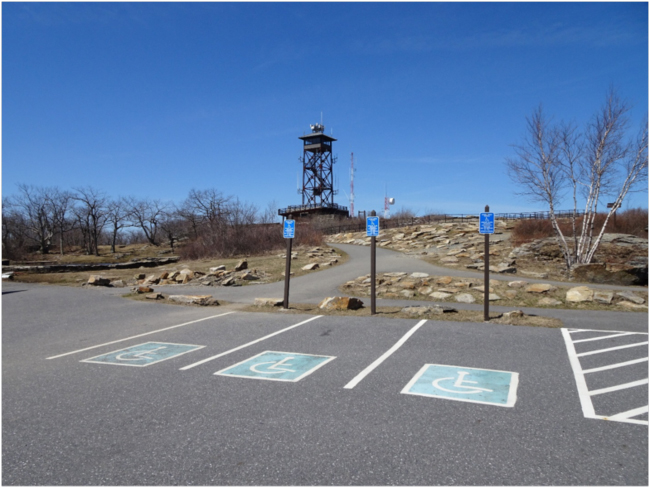 Handicapped parking and fire lookout tower on the Wachusett summit

Thoreau described some details of his night on Wachusett: “The blueberries which the mountain afforded, added to the milk we had brought, made our frugal supper, while for entertainment, the even-song of the wood-thrush rung along the ridge.

“We read Virgil and Wordsworth in our tent, with new pleasure there…

“… at length the wind drove us to the shelter of our tent, and we closed its door for the night, and fell asleep. It was a rich treat to hear the wind roar over the rocks, at intervals, when we waked, for it had grown quite cold and windy. The night was, in its elements, simple even to majesty in that bleak place—a bright moonlight and a piercing wind.”

Oh, it sounds so familiar to me, driven into the tent by the wind to read by candlelight on so many nights on my youthful backpacking expeditions to the mountains of my own high country. 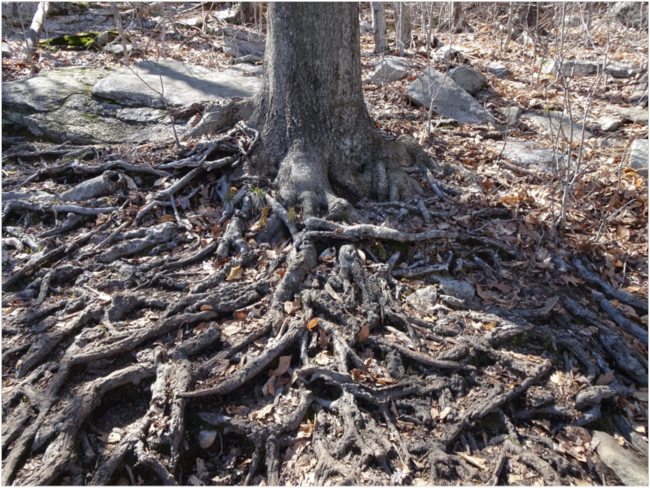 Roots across the trail, Wachusett Mountain

I took a less-travelled secondary trail on the way back down to my car and saw only two other hikers. Woodpeckers hammered on sunny trunks of still-leafless trees, and I stumbled over tangled roots and climbed over the occasional fallen trunk yet to be cleared from the trail after winter. It was a glorious spring day.

I thought of a line from the poem Thoreau embedded in his essay that gave away his transcendentalist spirituality. Speaking to the mountain, he wrote “Through your defiles windeth the way to heaven.” Thoreau’s nature-writing heirs – John Muir and John Burroughs, for example – also expressed related ideas. After climbing Cathedral Peak in Yosemite – a real mountain! – Muir wrote “This I may say is the first time I have been at church in California, led here at last, every door graciously opened for the poor lonely worshiper. In our best times everything turns into religion, all the world seems a church and the mountains altars.” Thoreau’s walk on Wachusett first blazed the trail into that ecophilosophical high country we’re still exploring.