You are here: Home » Blog » Consultation » Field of Dreams of Monarchs

Field of Dreams of Monarchs

One day in May I dug up some young milkweed plants I spotted growing along the bikepath while on a run, and transplanted them to my garden.  I guess it was a hopeful “if you plant it, they will come” vision: a “field of dreams” of monarchs. Ever since seeing millions overwintering in the mountains of Michoacán in 2004, I have wanted to connect with them – even assist them – on this end of their lifecycle and annual journey.  I was hoping to attract monarchs, but I didn’t really believe I would.

On the 4th of July, digging postholes for a new post and rail fence, I saw a monarch in my front yard. But there were no larvae on the milkweed.

In the middle of August I watched a monarch nectaring in the Joe Pye Weed I had planted as a butterfly nectar source in another moment of hopefulness.

Yesterday I discovered a fifth instar larva, a bulimic milkweed-stuffed sausage, gobbling a big leaf from tip up, about to burst with milky sap, loaded with its toxic cardiac glycosides, striped yellow, white, and black,  warning hungry birds, almost daring them to eat it. And as I watched, it squeezed out a translucent emerald jewel of milkweed frass. 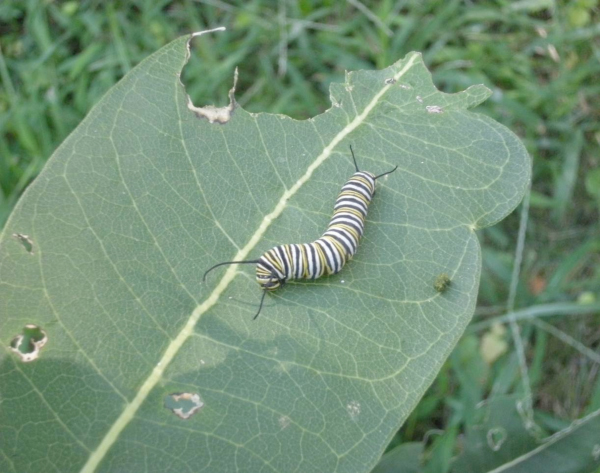 When I really started looking, I found eleven larvae that afternoon; two were big fat fifth instars, about two inches long. (Monarch larvae go through five larval stages called “instars,” and four molts, as they grow from the tiny caterpillars hatched from the egg).  Only two or three larvae on each of the four milkweed plants along the wall beside my driveway, interesting how the egg-laying female must have spread them out so there would be enough food to go around. 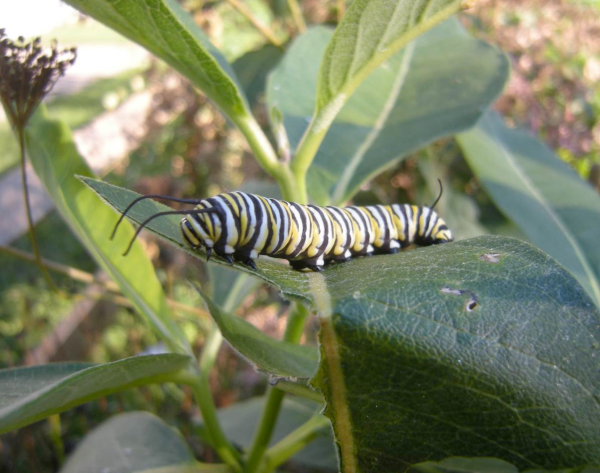 In the morning before breakfast, I checked the larvae, and the two fifth instars were still on their respective milkweeds.  But after breakfast, they were gone!  I found one crawling in the grass, so I quickly climbed up in the attic of the garage, and got out the old aquarium, and put that larva in it with a bunch of milkweed leaves for food.  The other one was nowhere to be found, and I rushed off to my last day of work at a consulting firm where I had worked for about five years. When I got home, I found the missing larva in what is called the “hanging J stage,” hanging from an old TV cable that runs low along the east side of the house. The other one, in the aquarium, was in the same stage, hanging from the windowscreen top.  The hanging J-stage lasts only about half a day – overnight, basically. When the last larval skin is shed, it drops to the ground, and there is the green pupa, the chrysalis stage.

I was excited – elated, in fact – to be leaving that job and re-starting the independent consulting business I’d first started in 1994. Even if coincidental, watching the start of monarch metamorphosis on my last day of a job that had becoming increasingly unrewarding, and moving on to something new and exciting,  was for me very symbolic. 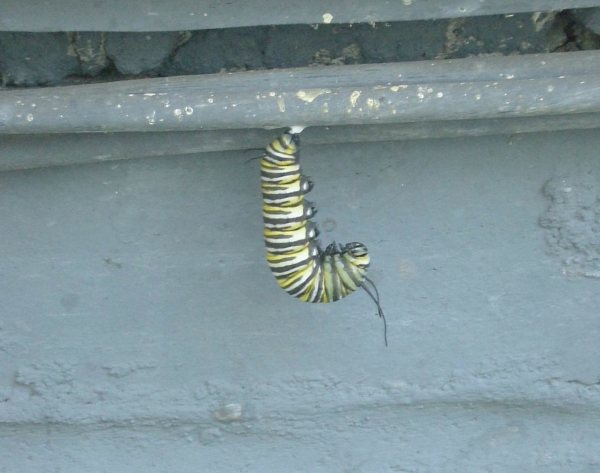 By the next morning, September 2nd, both monarchs were jade chrysalides. 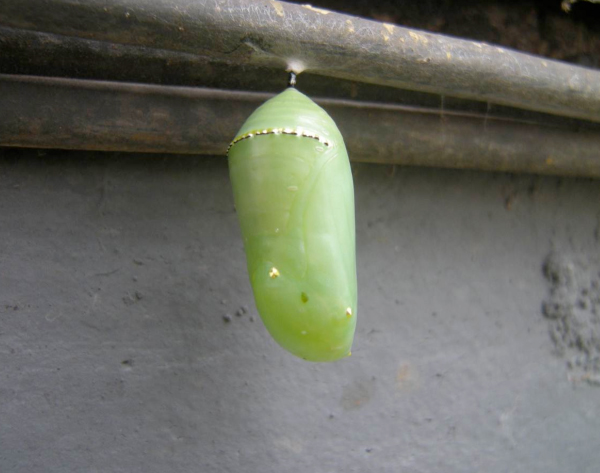 Coming home from the Farmer’s Market on a sunny, breezy Saturday morning, a monarch lingering in my garden, nectaring on the Joe Pye, and tasting and laying eggs on both Common and Swamp Milkweed (this last I grew from seeds). 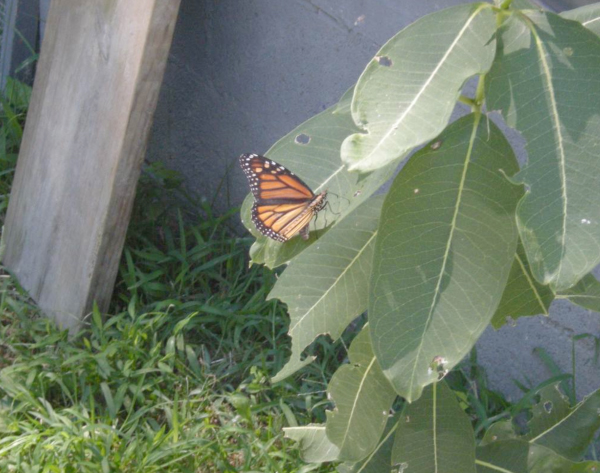 Saw another egg-laying female, tasting (as I interpreted it) every tallish plant around: tomato, tomatillo, lima beans, chestnut, corn; but only lingering on two, the milkweeds, and dotting them with eggs.

Saw three monarchs passing through my front yard and garden today, but none staying long, none laying eggs.  They nectared on the Joe Pye, and one briefly landed on the milkweed in the front, but she looked very bright and fresh, maybe from this newest generation and unmated, on her way to Mexico. She was around for a minute or two, then flew off to the SW.

The first of the three larvae I eventually brought into the aquarium emerged at 10:15 in the morning, after 11 days as a chrysalis; a female, she flew off at 4:30 PM from the open aquarium.

I could tell yesterday evening that this butterfly would emerge today, as the chrysalis became transparent and the black and orange wings could be seen inside.

I kept watching through the morning, and at one point was outside talking to my neighbor Bob in my driveway, checking every five minutes or so.  At 11:20 AM I saw the actual “birth” – the chrysalis split at the back, and it took only 15 seconds or so for the squished, rubbery butterfly to drop out, grabbing onto the glasslike chrysalis shell.  This took 14 days to metamorphose, whereas the one inside in the aquarium took only 11 days – probably the cooler night temperatures outside are what caused it to take longer. 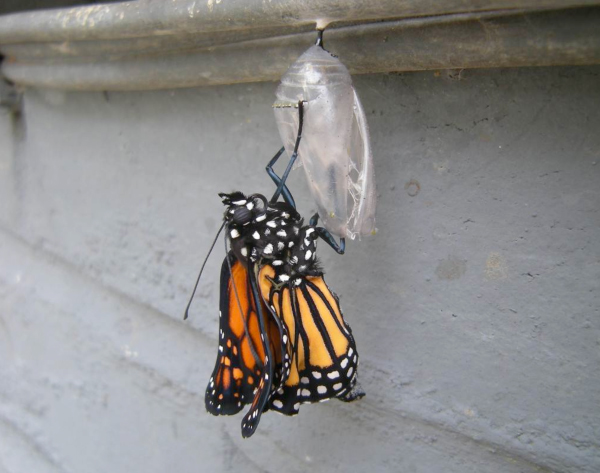 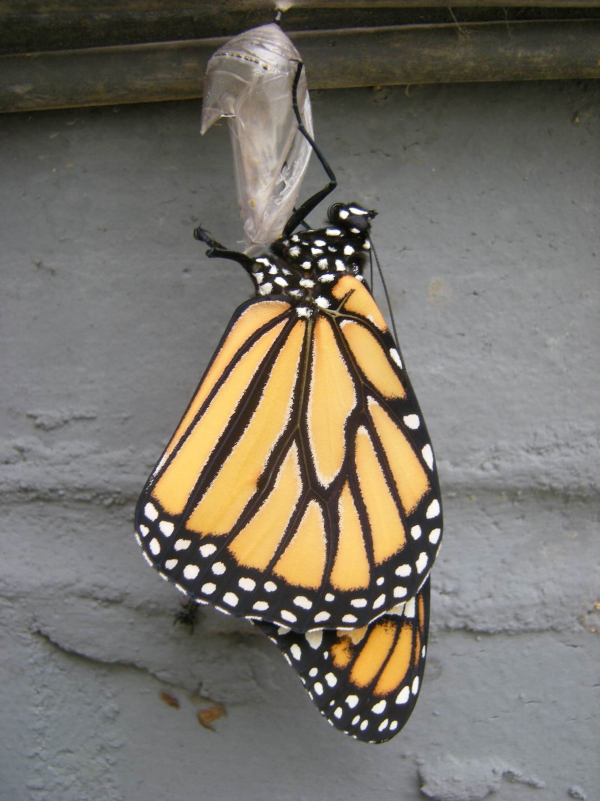 By 11:50, the wings seemed fully expanded

By 1:45 PM it – a male – had fluttered across the driveway and was resting in the grass at the edge of the garden.  By 2:05 it was hanging in the little chestnut in the breezy sun.  Next time I checked, it was gone, off on the journey to Michoacán. 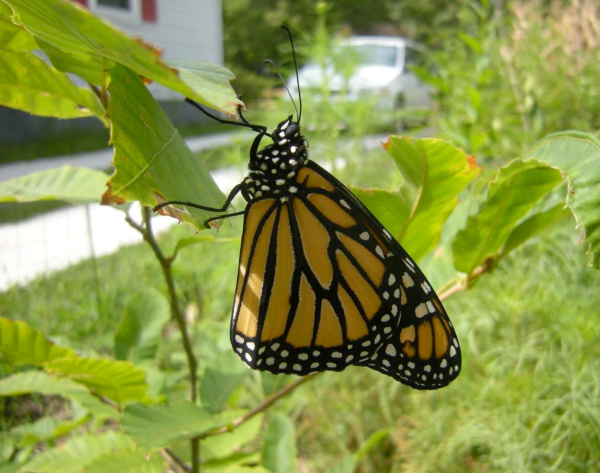 On September 15th I discovered another generation of larvae on the already chewed up milkweeds, a second and third instar – probably from the egg-laying female I saw and photographed on the 7th, about a week earlier.  By the 19th, the third instar looked like it was a fifth instar.  The whole larval period takes only about two weeks.  By around the 22nd or 23rd, no more larvae – they had all crawled off to pupate.

All in all, I counted 18 larvae in my side-yard monarch ranch.  I brought three into the aquarium and watched them pupate and metamorphose, but outside I found only one chrysalis – and the very first one, at that!  The other fourteen larvae hid themselves away to pupate, I guess, and I never was able to find them despite some looking.

Monarch male
absolutely bright and new
resting on the grass
in the front yard.
One of mine that only
emerged this morning?
Sun and wind
will carry him
to the cool forests
of oyamel and pine,
to overwinter in
the mountains
of Michoacán.