You are here: Home » Blog » Environment » Searching for Grauer’s Swamp-Warbler at the Top of the Nile

September 2014. Tucked among the mille collines of northern Rwanda is a huge, high-elevation marsh called Rugezi. On a map, or on Google Earth, Rugezi appears among the “thousand hills” – as “mille collines” translates from the French of the Belgian colonists of the country – as a serrated spearpoint, or metastasizing fir tree, pointing north-northwest toward Uganda. The thousand hills are here really more like a thousand ridges dropping into a thousand interdigitating valleys. Terraced crop fields cover improbably steep slopes. It is an unexpected, scenic landscape, more densely-populated and human-dominated than any I have ever experienced. 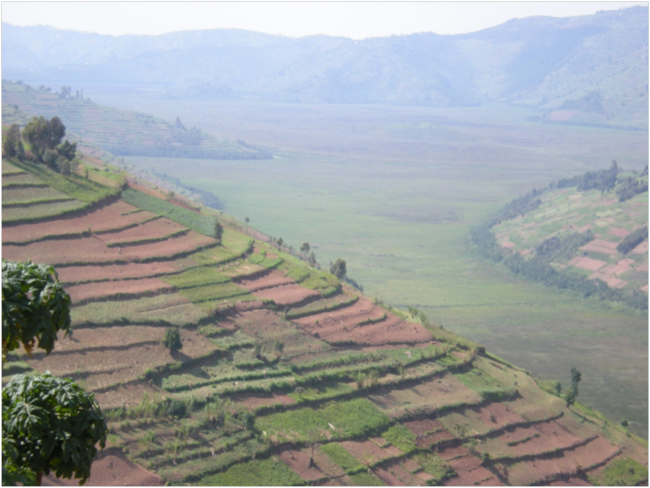 Looking down on the Rugezi Swamp

I was in Rwanda to conduct an environmental threats and opportunities assessment for the US Agency for International Development (USAID) working with three Rwandan consultants, experienced and knowledgeable national environmental experts. We were working under a contract with ECODIT, a small consulting firm based in Arlington, Virginia.

We left Kigali at 6:30 AM, at sunrise, heading north. This was the first day of a week of site visits with Emmanuel and Serge, two of the Rwandan consultants on the assessment team. We planned to visit each of Rwanda’s five protected areas – three national parks and two forest reserves – as well as other ecologically important areas like Rugezi, the country’s only Ramsar Site, designated as a Wetland of International Importance under the Ramsar Convention. A few hours later we first glimpsed Rugezi’s shoreline after descending from the high hilltop town of Gicumbi on a sunny, if hazy, morning. Terraced farms covered the landscape to the tops of every hill and ridge, with coppiced Eucalyptus woodlots almost the only trees on the landscape. There was virtually no indigenous vegetation left. 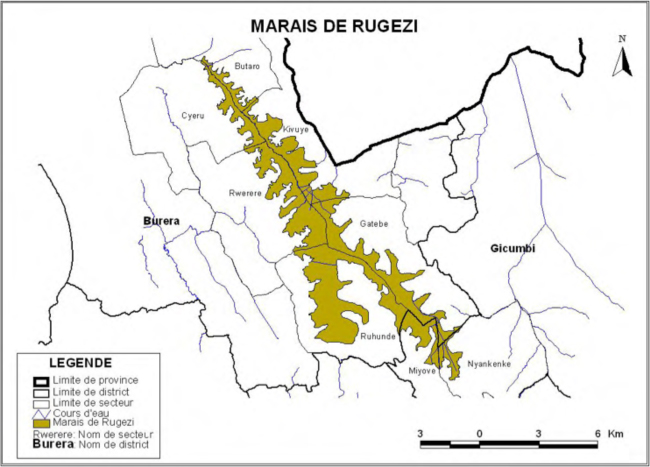 Map of the Rugezi Swamp

Rwanda is one of the smallest countries in Africa, geographically located in the highlands of the Albertine Rift, which divides east and central Africa and forms the “continental divide” between the Nile and Congo River Basins. Ninety percent of Rwanda’s surface water flows into the Nile Basin, contributing 8-10 percent of the flow of the White Nile. It is the most densely populated country in Africa, with an average of 421 people per square kilometer, and has been for a very long time, due to the fertility of its volcanic soils. A Belgian geographer calculated that Rwanda held that distinction even in the 1940s.

Geologically, the Rugezi Swamp is a vast waterlogged valley about 25 kilometers long, now perched at an elevation of around 2,000 meters above sea level in a synclinal depression formed by the uplift of the Buberuka Highlands. The steep hills above the swamp typically have slopes of between 35% and 60%; soils are fragile and erosion severe. In ecological terms, Rugezi is a plant-covered marsh, with scarcely any open water. The dominant vegetation in the upper reaches of the marsh is a tall, wide-leaved sedge, a Carex. In the lower section, just before its waters drop over a waterfall into Lake Burera, another sedge, papyrus, Cyperus papyrus, becomes dominant. 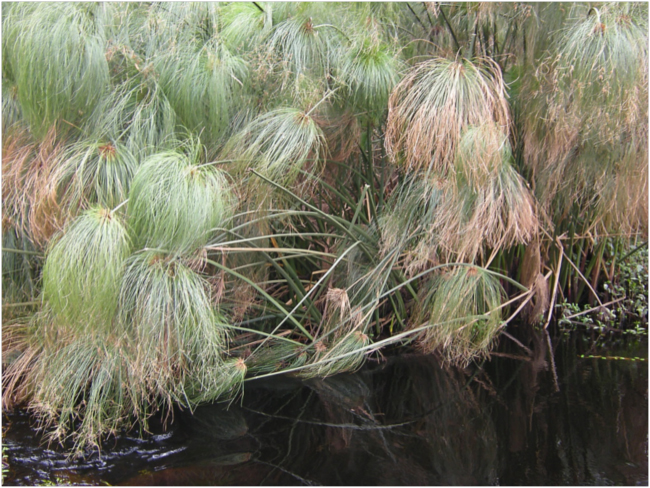 Rugezi acts like a giant sponge, absorbing and storing water from the rainy season and slowly releasing it during the dry season. It determines the rate, quantity, and quality of water that flows into Lake Burera and Lake Ruhondo below it. After flowing through the lakes, Rugezi’s waters flow into the Nyabarongo River, which turns south and eventually joins the Akagera River on the border with Burundi. At Rusumo Falls in the southeastern corner of the country, the Akagera turns north along the border with Tanzania to flow into Lake Victoria, and from there into the White Nile. The Rugezi Swamp is at the top of it all, one of the sources of the Nile.

But Rugezi is a swamp under stress, and we wanted to understand what is being done to save it. After traversing its eastern side on a road that repeatedly dropped from a ridge almost to its edge, then climbed another ridge and dropped again, we finally arrived at the northwestern end, where the Rusumo Stream spills the tannic, tea-colored marsh water over a rim of rock in a waterfall the color of rootbeer. There we met Berchimas Ayubusa, the chairman of the cooperative monitoring and protecting Rugezi, and the head community guide. 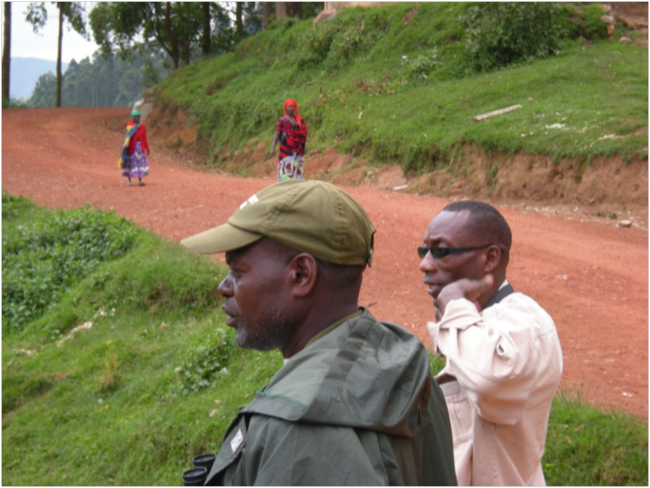 We mentioned our interest in seeing Grauer’s Swamp-Warbler, a rare, elusive, and endangered bird that is one of the species most sought-after anywhere by obsessive ornithological life-listers. Berchimas said he knew where we might see it, and we set out at a brisk pace along the deep, blackwater, papyrus-lined stream, following him. A gang of maybe a dozen boys, from about six to twelve years old, attached themselves to our expedition, drawn by the novelty of outsiders visiting this rural area, especially a “muzungu” like me, with such strange white skin. 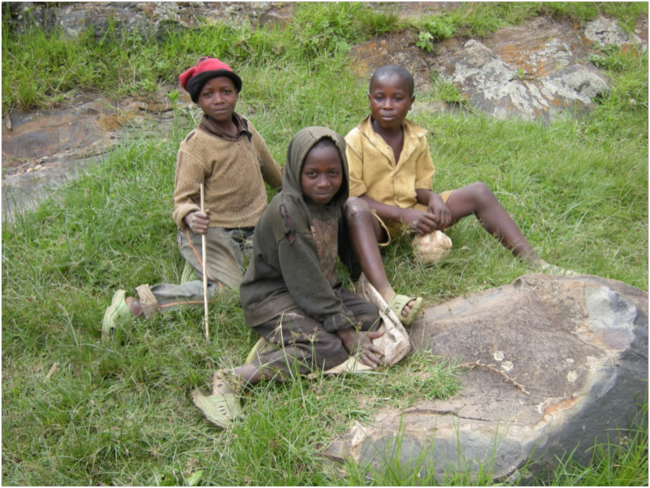 Grauer’s Swamp-Warbler, Bradypterus graueri, is described by Birdlife International as a “medium-sized, skulking, drab warbler” found only in high-elevation swamps in the Albertine Rift region of Rwanda, Burundi, eastern Democratic Republic of Congo (DRC) and south-western Uganda. In Rwanda, it occurs in Rugezi Swamp and in marshes around the Virunga volcanos and in Nyungwe National Park. Rugezi is thought to be the home of the largest concentration of this species in the world, perhaps up to 60% of the world population. According to BirdLife, “Despite being locally common, this species has a very small and severely fragmented area of occupancy within its small overall range. Many sites are being converted to cultivation or pasture. Thus the species’ area of occupancy is declining and, by inference, so is the number of mature individuals. It is therefore classified as Endangered.” 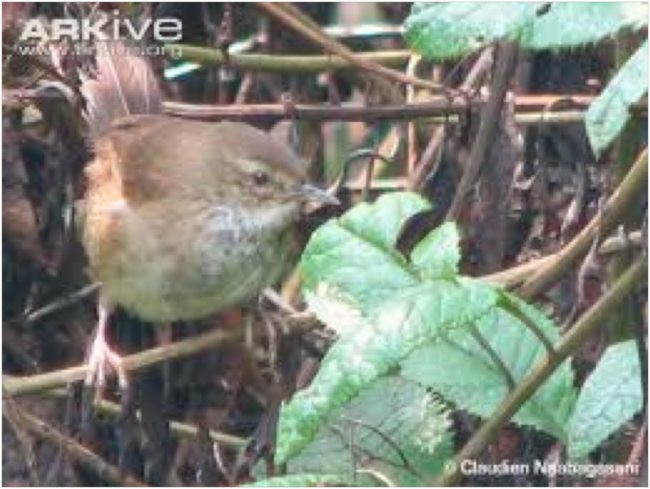 After walking along a firm trail below a plantation of Eucalyptus for maybe a kilometer, we turned out toward the papyrus along the stream, and soon felt the bouncy sponge of peat underfoot. We came to a blackwater channel maybe ten feet wide, spanned by a single log about six inches in diameter. Berchimas strode across confidently. I was next in line. I borrowed a stick from a local man, thinking I could use it to balance myself on the bottom of the channel as I crossed the log. I started across – overconfidently – and made it three-quarters of the way before I lost my cool, and reflexively tried to put the stick in the water to brace on the bottom. It didn’t touch bottom, which threw me off balance even more, and I slipped into the water only a foot from the far bank. I was in up to my waist, still not touching bottom with my feet, and Berchimas and another man worriedly grabbed my hands and arms to help me onto the bank. Very luckily, my camera and binoculars stayed above water, and my cell phone and wallet weren’t under long enough to get damagingly wet.

I was soaked in cold marsh water from the waist down, but all my valuables were fine. The gang of boys was too horrified at the sight of a clumsy muzungu falling into the water to laugh uproariously – which would have been the appropriate response – until I started to laugh at myself, and they gladly joined in with gusto.

I was unintentionally baptized in the dark, peatific waters of Rugezi. It was an unexpected blessing: an intimate, unforgettable contact with the swamp. 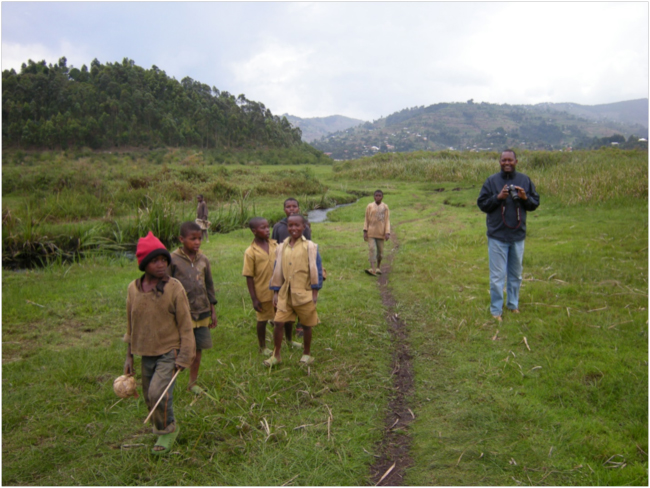 We hiked on around the far edge of the marsh looking and listening for Grauer’s Swamp-Warbler. My wet heavy jeans dragged at my belt. The exuberant boys lost interest and abandoned us. Berchimas checked all of the areas where he had seen them before, but no “skulking, drab” Bradypterus graueri showed itself. No Grauer’s Swamp-Warbler on our life-lists today; it was not to be.

On the way back we crossed the dark stream by a different route, on an old log canoe now being used as a bridge, with no risk of another wetting. When the water in the swamp was higher, canoes like this were an important means of transportation. Now they are a thing of the past, a relict and reminder of human-caused environmental change here in Rugezi. 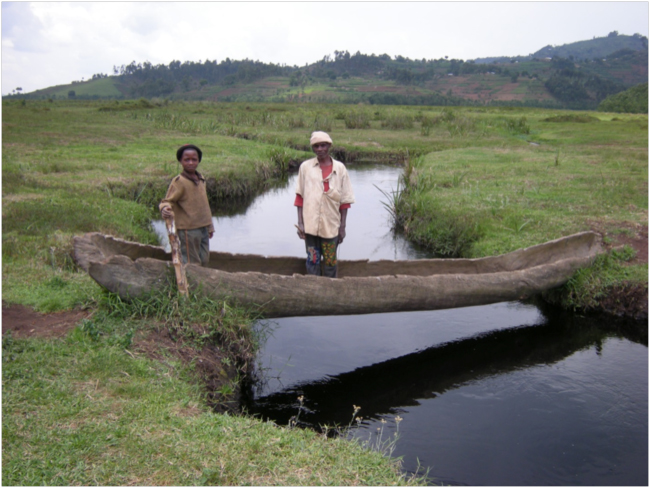 Old canoe used as a bridge

Rugezi is a case study of the unintended consequences of actions taken without understanding how natural ecosystems function to provide ecological services. The sad story is told in somewhat contorted but passionate English by Sylvère Hategekimana and Emmanuel Twarabamenye in their 2007 article,The impact of wetlands degradation on water resources management in Rwanda: the case of Rugezi Marsh: “Another intervention which deteriorated the already precarious situation of the swamp is which, in our opinion, had an effect particularly determining in the degradation of the swamp is the drainage of the swamp by the ELECTROGAZ [Agency for Electricity, Water and Gas supply] in 2000. This year, this company came to lack some water for running of three turbines at the Ntaruka Power plant during that dry year. As the level of the lake Bulera had dropped down of more than 4 m, ELECTROGAZ began then the works of drainage of the swamp to increase the hydroelectric production of the Power plant.” 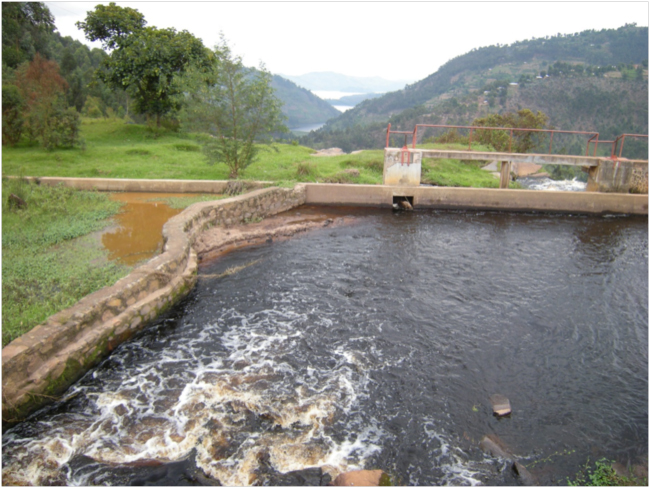 To try to increase the flow from the Rugezi Swamp into Lake Burera, in other words, the national power company mechanically deepened the channel where the Rusumo Stream flowed over the falls into the lake. This action led to a lowering of the level of the swamp, and many of its side branches dried up. Land-hungry farmers from the slopes above moved in to cultivate the now-dried land. But this reduction in the area of marshland had the unintended and unwanted effect of reducing the water-holding, buffering capacity upon which downstream hydropower production ultimately depended, lowering the water levels in the lakes even more.

Hategekimana and Twarabamenye continue their sad story: “The last consequence of all the degradation of the swamp of Rugezi is the catastrophic decline of the hydroelectric power production at Ntaruka and Mukungwa of power plants. After the land reclamation of the marsh, the water level of the lake Bulera, supplied in 50 % by the Rusumo stream (emissary of Rugezi Marsh), fell from 1864.5 to 1859.5 m between 1997 and 2000. Thus the hydroelectric production of the Power plants of Ntaruka and Mukungwa very strongly declined. The failure in the hydropower generation resulted in frequent power shortages and blackouts that affected citizens, industries, and therefore leading to negative effect on the national economy.” 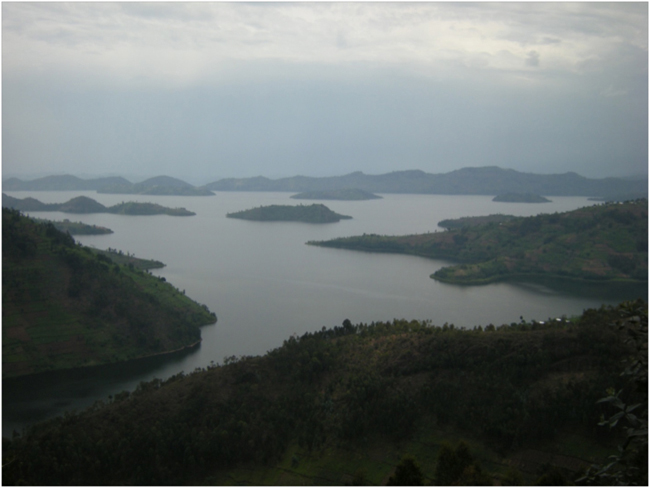 After saying goodbye to our guide Berchimas, we dropped down off the highlands on which Rugezi is perched, and rounded the northeastern shore of Lake Burera, skirting the Uganda border. We had failed to find Grauer’s Swamp-Warbler, but I kept thinking about the link between this scruffy, skulking endemic bird, hydropower production, and the economy of Rwanda, not to mention its link to water flowing down the Nile clear to the Mediterranean.