You are here: Home » Blog » Biodiversity » Monkey Business in Oregon

August 10th, 2012. Learning about John Muir’s obsession – it probably deserves to be called that – with the ancient tree family Araucariaceae, and especially Araucaria araucana, the “Monkey Puzzle Tree,” I became very interested in Muir’s story and in this species too. Last March my son and I retraced the remarkable journey Muir made alone, at the age of 73, in search of native forests of these trees on the slopes of Volcan Tolhuaca in central Chile (see “Tracking John Muir to the Monkey Puzzle Forests of Chile“).

Before that trip I was searching the web for information, and googled “Monkey Puzzle Tree.” Among the many “hits” was “Monkey Business 101.” Hmmm… interesting…. My first thought was: Dare I go there? What kind of “monkey business” was this? Eventually, I did go there. But first, some background.

My granddad showed me my first Monkey Puzzle trees in Portland, Oregon, when I was just old enough to remember, on one of my family’s annual summer visits. Monkey Puzzles were fairly common in Portland and I didn’t think about asking why. But for a kid from New Mexico, they were very exotic and strange. I’ve now learned that Portland has probably the highest concentration of Araucaria araucana outside of their native range in Chile, for a very unique reason. The Lewis and Clark Centennial American Pacific Exposition of 1905, a sort of world’s fair, was held in Portland to commemorate the fact that the exploring expedition spent the winter of 1805-06 at the mouth of the Colombia River, not far away. The country of Chile had an exhibit at the Exposition, and gave away seedlings of its most unique and striking tree, Araucaria araucana. Portlanders took them by the hundreds and planted them. The climate was not so different from the temperate rainforest zone of central Chile, and the trees thrived. I didn’t know the story then, of course, but this is the reason that these weird trees were relatively common in my granddad’s neighborhood in old northeast Portland. 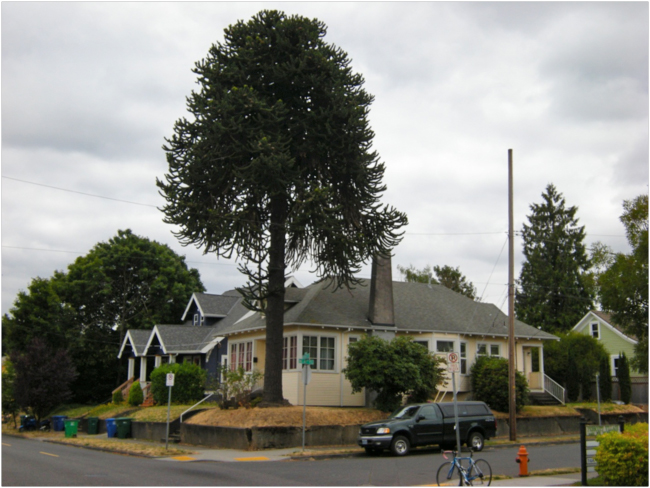 And now? On my recent trip to attend the 2012 annual meeting of the Ecological Society of America in Portland, I thought I’d scout around my granddad’s old neighborhood. His house, on NE 34th Street, is still pretty much the way I remembered it, although with an addition on the back. The big old birch tree I used to climb still stands in his front yard. Cruising around the blocks near his house, I didn’t see Monkey Puzzles. I headed down Prescott Street toward the Willamette River, and saw an elderly lady working in the flowerbeds of her front yard, so I stopped and asked her: do you know of any Monkey Puzzle trees nearby? “No…” she said… “I’ve lived here 40 years, and I can’t think of where I’ve seen them… but I don’t like them! They are ugly trees! You could ask at the garden store, just a block away on the corner, they might know.” The young staff there were excited about my Monkey Puzzle quest, unlike the elderly gardener, and were half-helpful in terms of locating one. One young employee said “Oh! I feel like I’ve seen them all over! But… I can’t think of where!” A young woman said “Try a few blocks down, 14th and Prescott. I used to live there, I think there was one on the corner…” Sure enough, she was right. And a few more blocks down Prescott, in front of another old house, was another old Monkey Puzzle. 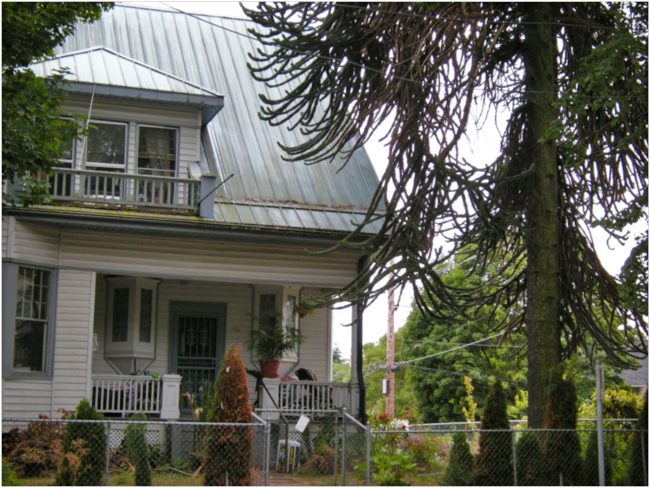 OK, now back to “monkey business.” When I went to the website of “Monkey Business 101,” I found that it wasn’t an escort service for beginners, after all, but a nursery on Highway 101, near Cloverdale, Oregon, which specializes in growing Monkey Puzzle trees. So I decided to make a visit. Cloverdale is in the lush dairy country along the main coast highway just south of Tillamook. The landscape here has an uncanny resemblance to the valleys and ridges near Valdivia, on the coast of Chile, with similar “Pacific Rim” coastal tectonic geology, and at almost the same latitude south as Tillamook is north. No wonder Araucaria can grow here.

Barbara Brown, proprietor of Monkey Business 101, greeted me on a sunny Friday afternoon, and immediately started showing me her trees. If Portland has the highest density of Araucaria araucana outside of Chile, Barb’s acre matches or exceeds the density of even a vigorous native Araucaria forest there. She has hundreds of trees in her six year old nursery. She started it because of an obsession – yes, that’s probably the correct word again – with Monkey Puzzles. She has since diversified into a wide range of nursery plants, but it is clear from the space and attention she devotes to Araucaria that they are her first love. 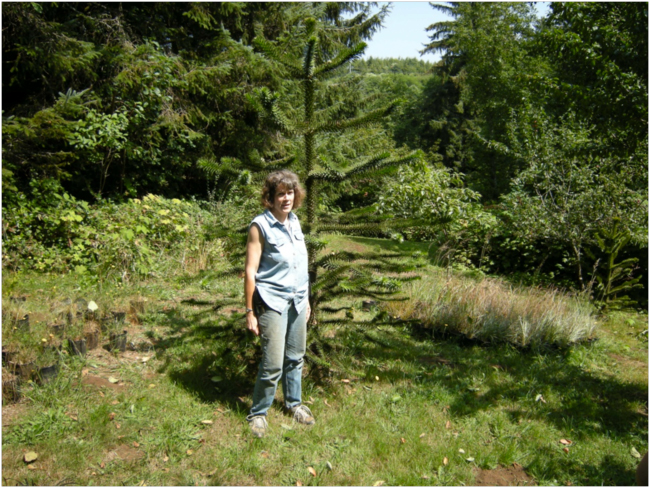 How did she come to obsessed with Monkey Puzzles? Her favorite movie when she was young, she said, was “The Ghost and Mrs. Muir.” This 1947 black-and-white movie starred Gene Tierney as the widowed Mrs. Muir, and Rex Harrison as the ghost of Captain Gregg. Upon renting the cottage of the deceased sea captain on the coast of England, Mrs. Muir has his prized Monkey Puzzle tree cut down, much to the ghost-owner’s displeasure, conveyed to her in a personal appearance. Despite this apparitional altercation, Captain Gregg’s ghost and Mrs. Muir developed a relationship that lasted a lifetime… er… well¸ a deathtime… or… Well, you’ll just have to rent the movie from Netflix and watch it, as I did. In any case, the movie moved Barbara Brown to develop a unique career.

Monkey Puzzle Trees from Monkey Business 101 now grow in 23 states, and Barb was about to ship a six-foot tree to a customer in North Carolina. This fall I will probably be planting an Araucaria in my yard in Falls Church, Virginia, from her nursery.

One day, Barb said, a black drug enforcement helicopter came and hovered low over her property – the kind of helicopter that searches the Oregon backcountry here for not-uncommon marijuana growing operations. They apparently thought her plot of hundreds of baby Araucarias looked suspicious. After awhile they whirred away, and she waited for a visit from a black SUV full of armed drug police. But the visit never came; they must have decided that the prickly baby Monkey Puzzles didn’t look like dope after all. 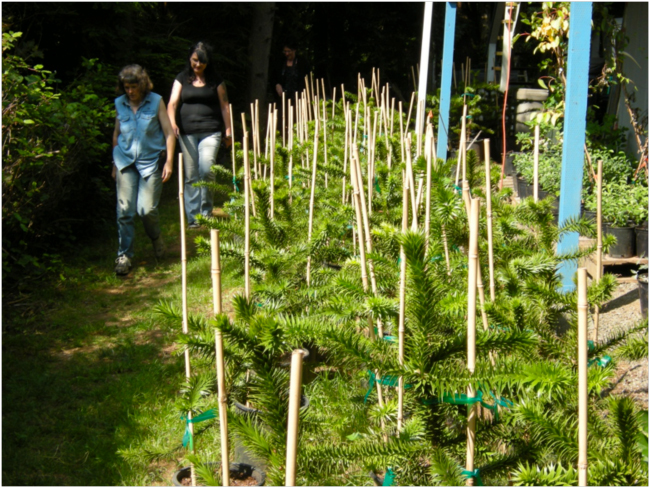 While I was talking to Barb, a reporter for the Tillamook Headlight Herald, the local newspaper, arrived to interview her and take pictures for a story. Barb was giving a presentation on Monkey Puzzles at the Tillamook Library next week. I fell into the trap, and the reporter, Mary Faith Bell, seemed intrigued by the deeper background I provided: the connection between this ancient tree, its natural habitat, and John Muir’s fascination with the species. Read her story on TillamookHeadlightHerald.com.

After talking with us for a couple of hours, Mary Faith headed off to the Tillamook County Fair, where the “Pig and Ford” race was soon to start. In the Pig and Ford, drivers of Model T Fords grab squealing baby pigs under their arms, crank-start their old cars, drive around a sand track, drop that pig and pick up another, and race the circuit again. Since this competition is unique to the Tillamook State Fair, this amounts to the World Championship in this “event.” See the outcome and whatever you do, don’t miss the 2012 Pig and Ford World Championship video!

Sorry to miss the Pig and Ford Race, I said goodbye to Barb and Monkey Puzzle 101 Nursery, and headed for a sunset run on the beach a few miles to the west. It was a most memorable day. 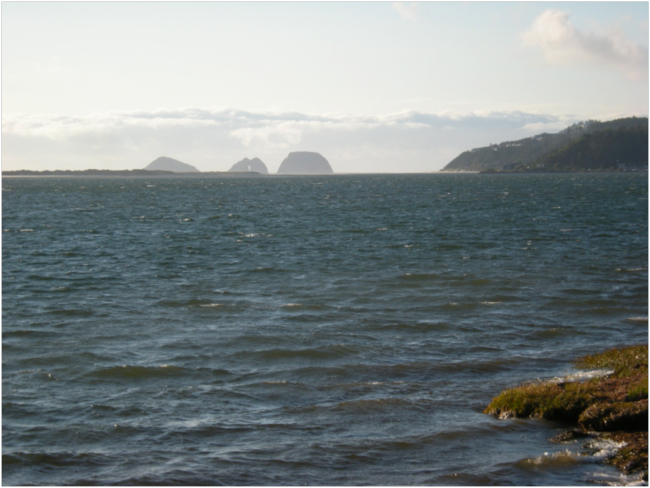 Leave a Reply to Walter Knausenberger